100 Oscar Wilde Quotes-Oscar Wilde an Irish poet, playwright and author of many short stories and one novel. Known for his flamboyant style and infamous imprisonment for homosexuality.

He emerged as one of the greatest playwrights of his time, and one of the successful celebrities of his day. Most his plays are still widely performed, especially The Importance of Being Earnest. Here are some Oscar Wilde Quotes that will blow you mind about the power of deceit and lying.

“Lying, the telling of beautiful untrue things, is the proper aim of art” Oscar Wilde Quotes 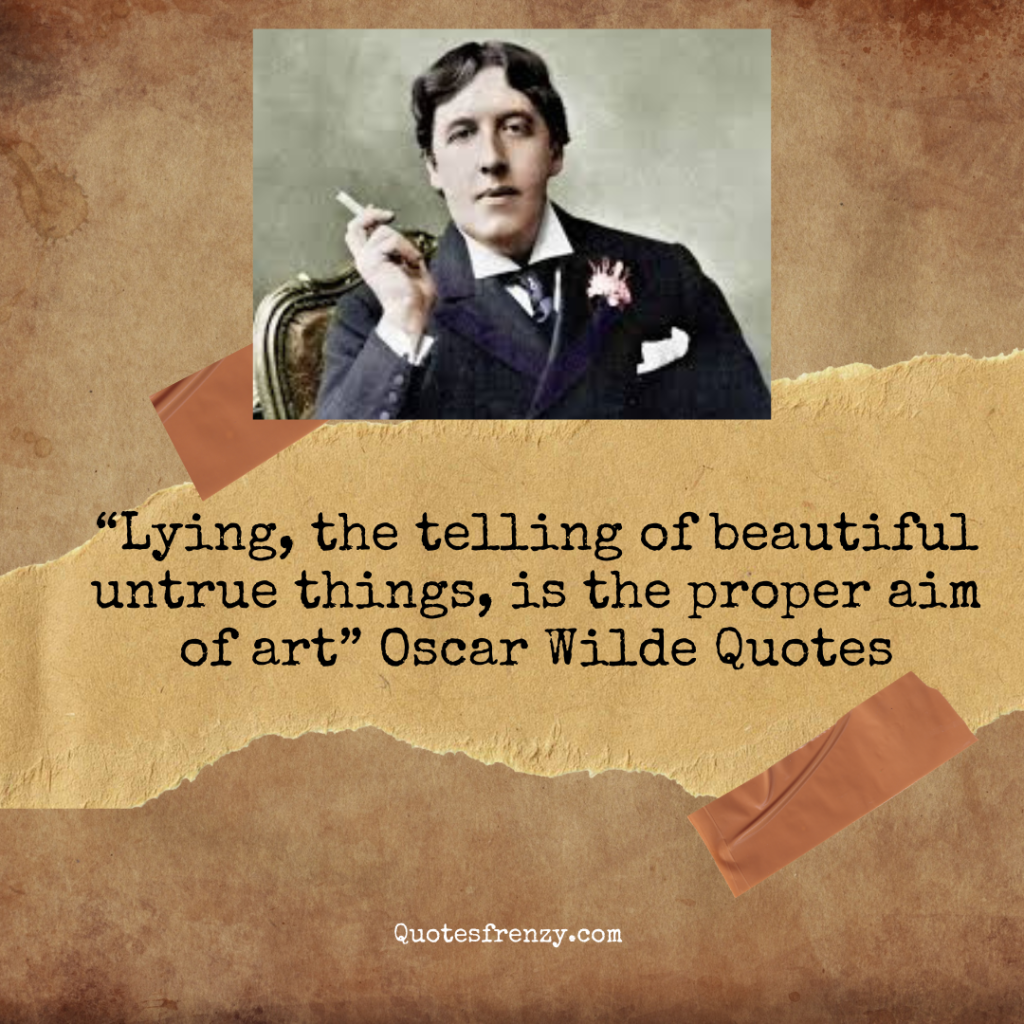 The beauty of untruth is deceiving, you enjoy living in falsehood. You are always ready to fall into an illusion. Fake stories and false promises uprooted every quest for the truth. Every lie has an essence of cleanliness and your lips suck every impurity, then the world changes brutally and the colors and rainbow are washed away. The remaining time you are concerned with repair and correction, you then turn into a sniffer dog.

“Keep love in your heart. A life without it is like a sunless garden when the flowers are dead.” 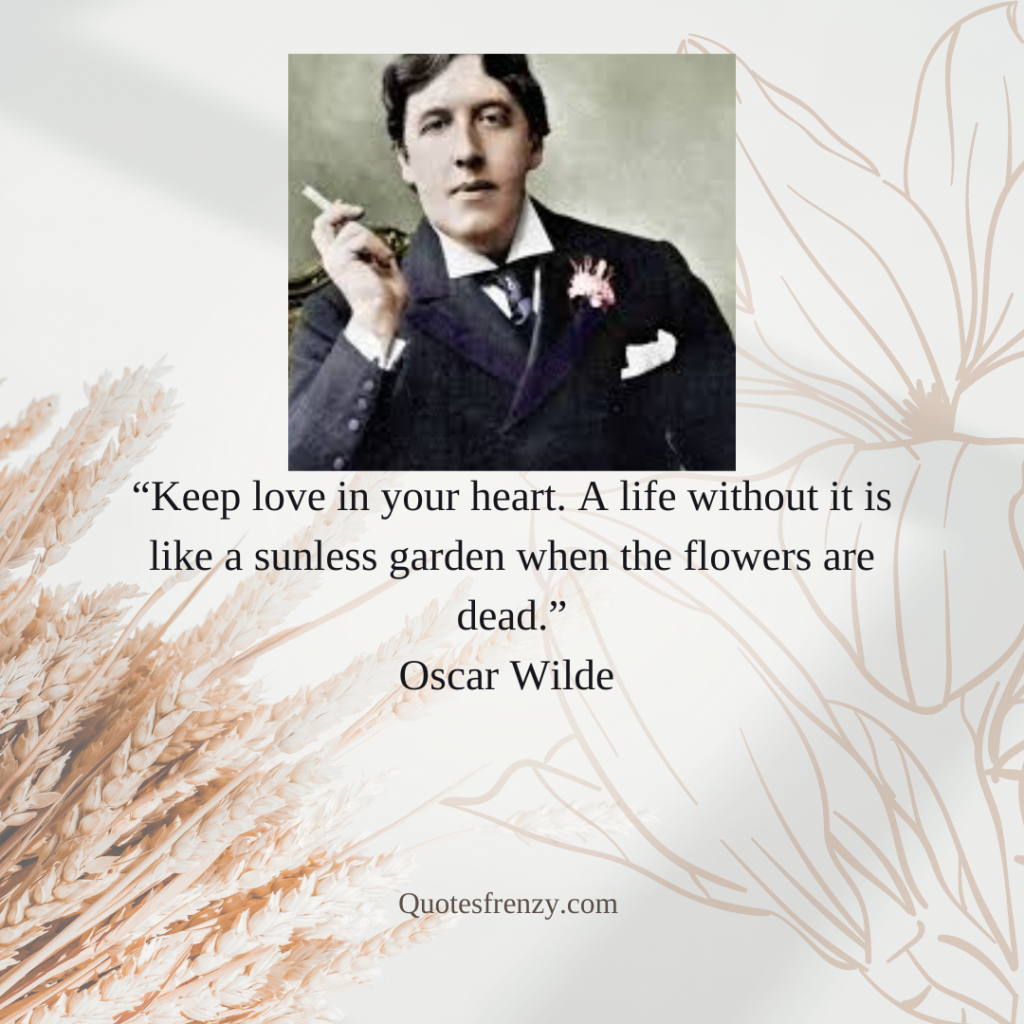 “The world is divided into two classes, those who believe the incredible, and those who do the improbable.”

“I have the simplest tastes. I am always satisfied with the best.”

“When I was young I thought that money was the most important thing in life; now that I am old I know that it is.”

“The truth is rarely pure and never simple.”

“Always forgive your enemies – nothing annoys them so much.”

“There are only two tragedies in life: one is not getting what one wants, and the other is getting it.”

“There is no sin except stupidity.”

“I have nothing to declare except my genius.”

“The only difference between the saint and the sinner is that every saint has a past, and every sinner has a future.” 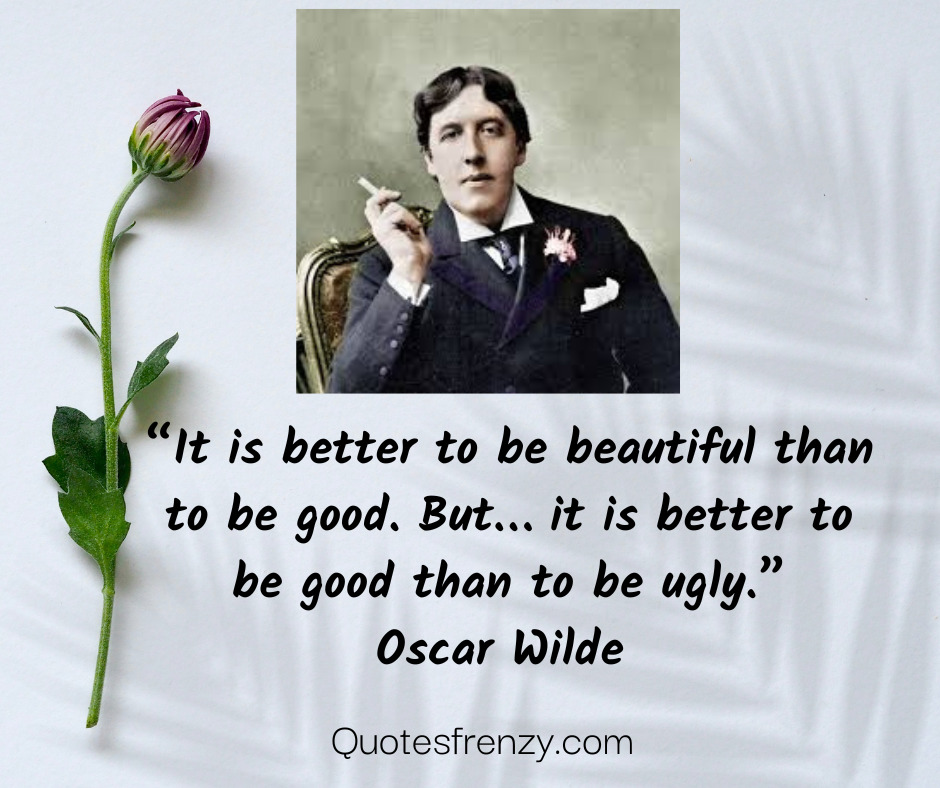 “No man is rich enough to buy back his past.”

“If one cannot enjoy reading a book over and over again, there is no use in reading it at all.”

“All women become like their mothers. That is their tragedy. No man does. That’s his.”

“Success is a science; if you have the conditions, you get the result.” 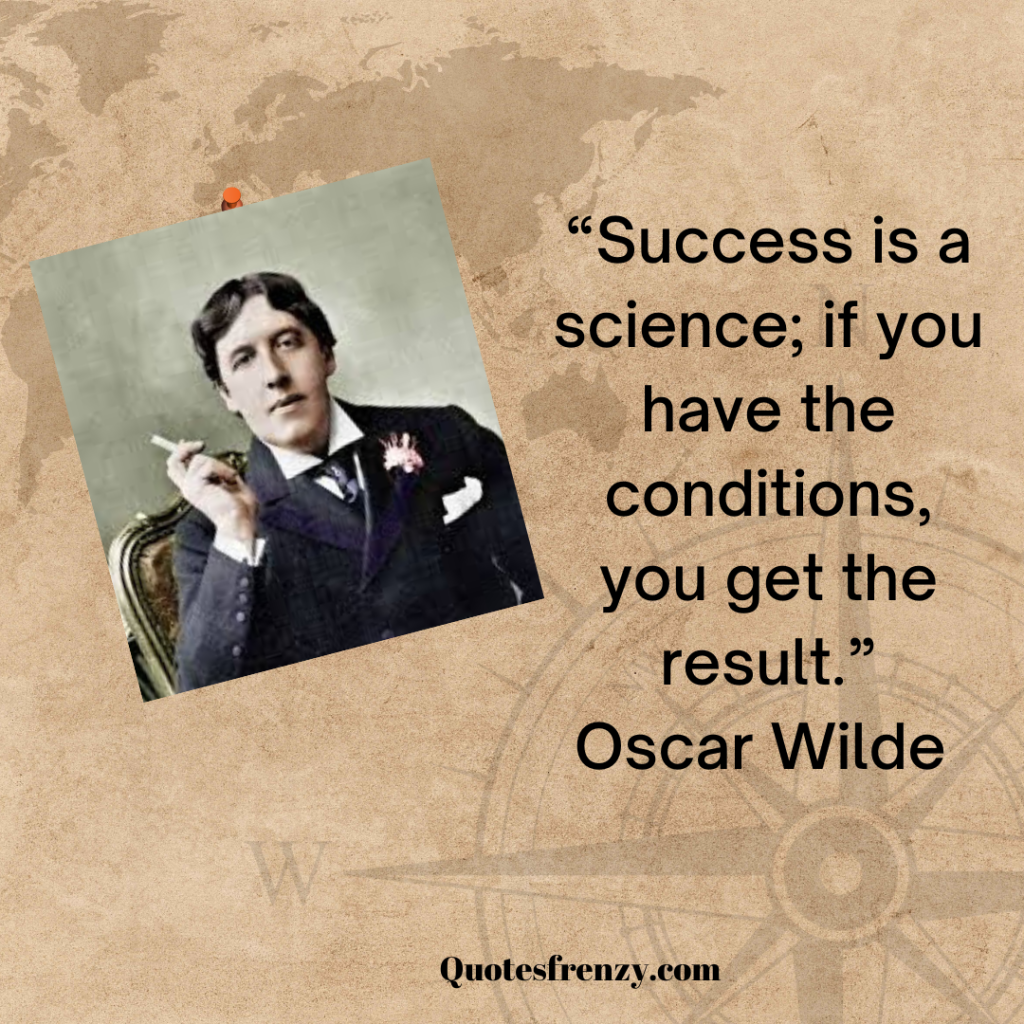 “Whenever a man does a thoroughly stupid thing, it is always from the noblest motives.”

“Life is far too important a thing ever to talk seriously about.”

“Deceiving others. That is what the world calls a romance.”

“He has no enemies, but is intensely disliked by his friends.”

“What is a cynic? A man who knows the price of everything and the value of nothing.”

“I am not young enough to know everything.”

“Men always want to be a woman’s first love – women like to be a man’s last romance.” 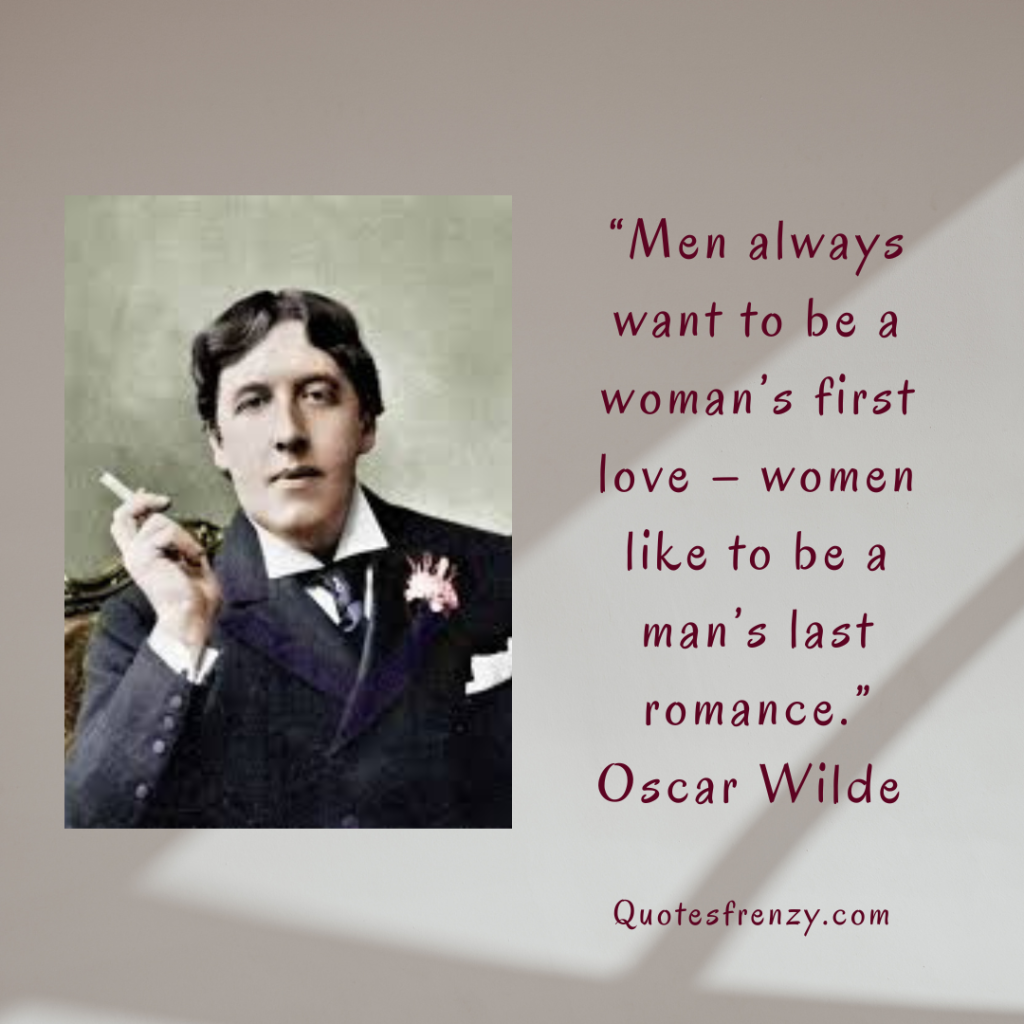 “Consistency is the last refuge of the unimaginative.”

“I never travel without my diary. One should always have something sensational to read in the train.”

“A work of art is the unique result of a unique temperament.”

“Life is never fair, and perhaps it is a good thing for most of us that it is not.”

“Whenever people agree with me I always feel I must be wrong.”

“Everybody who is incapable of learning has taken to teaching.”

“It is what you read when you don’t have to that determines what you will be when you can’t help it.”

“The world has grown suspicious of anything that looks like a happily married life.” 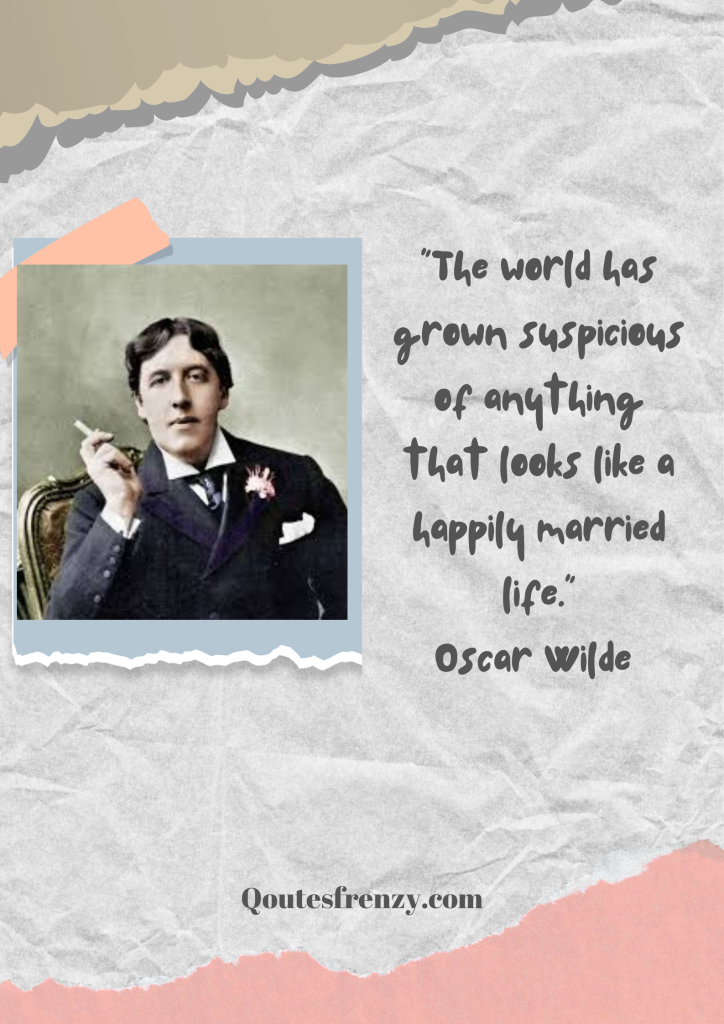 “There is always something ridiculous about the emotions of people whom one has ceased to love.”

“Experience is simply the name we give our mistakes.”

“As long as a woman can look ten years younger than her own daughter, she is perfectly satisfied.”

“Between men and women there is no friendship possible. There is passion, enmity, worship, love, but no friendship.”

“Women are made to be loved, not understood.”

“Those who find ugly meanings in beautiful things are corrupt without being charming. This is a fault.”

“I put all my genius into my life; I put only my talent into my works.”

“You will always be fond of me. I represent to you all the sins you have never had the courage to commit.”

“When the gods wish to punish us they answer our prayers.”

“I can resist everything except temptation.”

“To expect the unexpected shows a thoroughly modern intellect.”

“Romance should never begin with sentiment. It should begin with science and end with a settlement.”

“True friends stab you in the front.”

“Memory… is the diary that we all carry about with us.”

“A gentleman is one who never hurts anyone’s feelings unintentionally.” 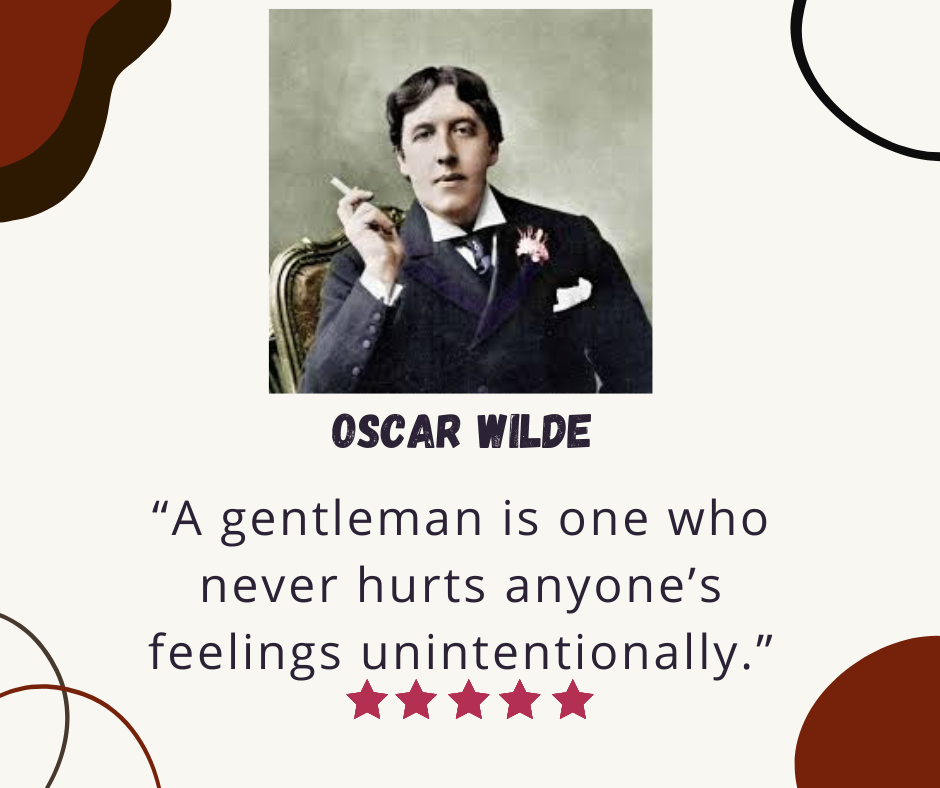 “There is a luxury in self-reproach. When we blame ourselves we feel no one else has a right to blame us.”

“Ordinary riches can be stolen; real riches cannot. In your soul are infinitely precious things that cannot be taken from you.”

“Most people are other people. Their thoughts are someone else’s opinions, their lives a mimicry, their passions a quotation.”

“Morality is simply the attitude we adopt towards people whom we personally dislike.”

“A dreamer is one who can only find his way by moonlight, and his punishment is that he sees the dawn before the rest of the world.”

“One should always be in love. That is the reason one should never marry.”

“The only thing to do with good advice is to pass it on. It is never of any use to oneself.”

“Work is the curse of the drinking classes.”

“The true mystery of the world is the visible, not the invisible.”

“I am so clever that sometimes I don’t understand a single word of what I am saying.”

“The one charm about marriage is that it makes a life of deception absolutely necessary for both parties.”

“One’s real life is so often the life that one does not lead.”

“Art is the most intense mode of individualism that the world has known.”

“One should always play fairly when one has the winning cards.”

“Pessimist: One who, when he has the choice of two evils, chooses both.”

“How can a woman be expected to be happy with a man who insists on treating her as if she were a perfectly normal human being.”

“It is better to have a permanent income than to be fascinating.”

“A poet can survive everything but a misprint.”

“Laughter is not at all a bad beginning for a friendship, and it is far the best ending for one.” 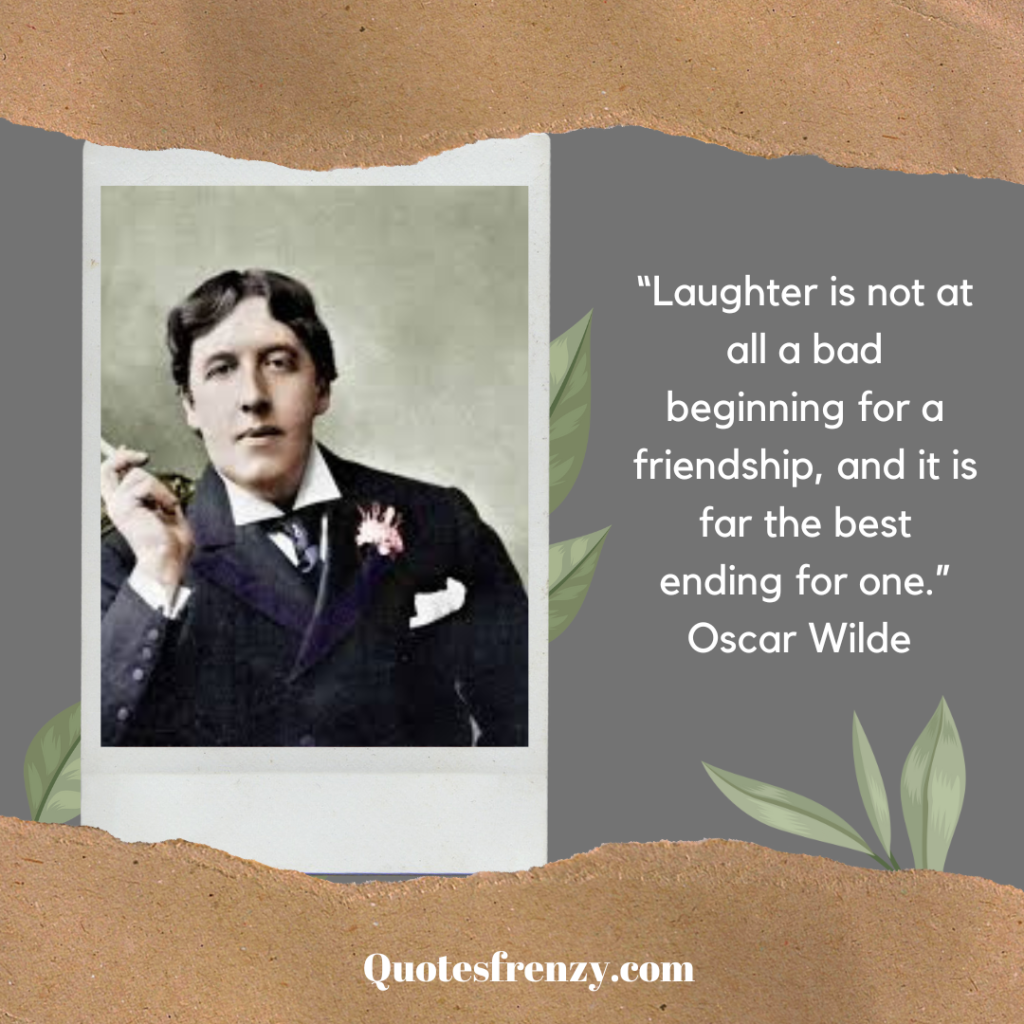 “The advantage of the emotions is that they lead us astray.”

“Man is a rational animal who always loses his temper when he is called upon to act in accordance with the dictates of reason.”

“Women love us for our defects. If we have enough of them, they will forgive us everything, even our gigantic intellects.”

“A man can’t be too careful in the choice of his enemies.”

“It is always the unreadable that occurs.”

“An excellent man; he has no enemies; and none of his friends like him.”

“Society exists only as a mental concept; in the real world there are only individuals.”

“Experience is one thing you can’t get for nothing.”

“No woman should ever be quite accurate about her age. It looks so calculating.”

“The moment you think you understand a great work of art, it’s dead for you.”

“I have never given adoration to any body except myself.”

“A thing is not necessarily true because a man dies for it.”

“Man is least himself when he talks in his own person. Give him a mask, and he will tell you the truth.”

“Beauty is the only thing that time cannot harm. Philosophies fall away like sand, creeds follow one another, but what is beautiful is a joy for all seasons, a possession for all eternity.”

“One can survive everything, nowadays, except death, and live down everything except a good reputation.”

“To love oneself is the beginning of a lifelong romance.”

“There is nothing so difficult to marry as a large nose.”

“No great artist ever sees things as they really are. If he did, he would cease to be an artist.”

“Education is an admirable thing, but it is well to remember from time to time that nothing that is worth knowing can be taught.”

“It is absurd to divide people into good and bad. People are either charming or tedious.”

“A man can be happy with any woman, as long as he does not love her.”

“When a man has once loved a woman he will do anything for her except continue to love her.”

“I am the only person in the world I should like to know thoroughly.”

“One of the many lessons that one learns in prison is, that things are what they are and will be what they will be.”

“I have said to you to speak the truth is a painful thing. To be forced to tell lies is much worse” Oscar Wilde Quotes


The most hurtful thing you can do to anyone is not just deception; it’s in most cases telling the truth. The best way hurting a romantic partner is being honest-tell a spouse anything they don’t want to hear. In short, the truth can be used as a tool for destruction in your close relationship.

While telling the truth can often lead to a lot of hurt feeling, pain, and suffering-deception is not a luxury, sometime necessary.


As the saying goes “The true measure of a man is how he treats someone who can do him absolutely no good,” that doesn’t apply to two people in love in the Ideal world, sorry buddha! Expectation cause more stress than joy. it mar the act of giving, which makes anyone feel the guilt; it leads to disappointment if the person You help does not return the kindness; it ties their intention to a score card that places a wedge in their relationship.

Let’s face it, none of us is always kind. Human nature dictates we’ll act with one eye on what’s in for us, at least occasionally.