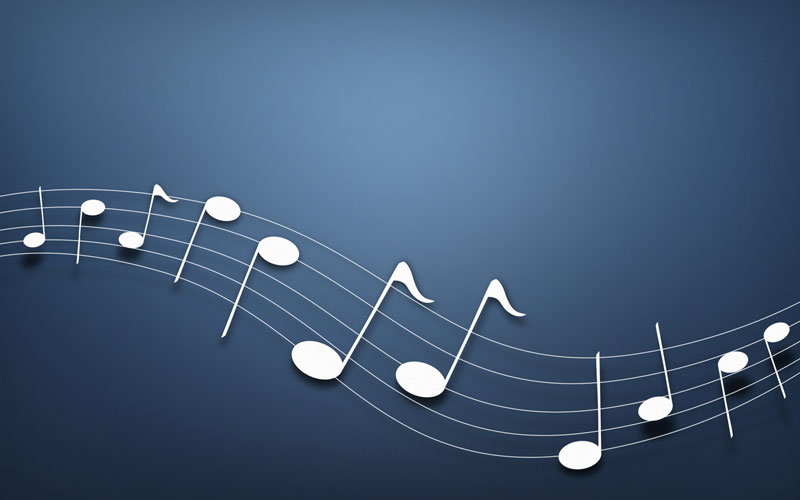 Music is an intentionally organized art form whose medium is sound and silence, with core elements of pitch (melody and harmony), rhythm (meter, tempo, and articulation), dynamics, and the qualities of timbre and texture.

Looking for the best music quotes? We’ve compiled a list of the top 120 famous and inspirational quotes and sayings about music. 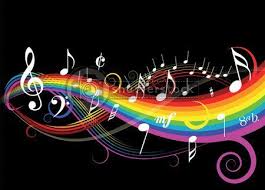 “Music is like a dream. One that I cannot hear.” – Ludwig van Beethoven

“Without music, life would be a blank to me.” – Jane Austen

“Music is love, love is music, music is life, and I love my life. Thank you and good night.” – A. J. McLean

“Music is the strongest form of magic.” – Marilyn Manson 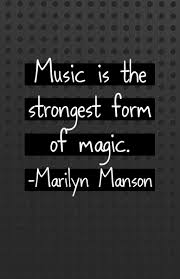 “Music is my religion.” – Jimi Hendrix

“Music washes away from the soul the dust of everyday life.” – Berthold Auerbach

“The only truth is music.” – Jack Kerouac

“Life seems to go on without effort when I am filled with music.” – George Eliot

“Music should be your escape.” – Missy Elliott

“Music gives a soul to the universe, wings to the mind, flight to the imagination and life to everything.” – Plato

“Without music, life would be a mistake.” – Friedrich Nietzsche 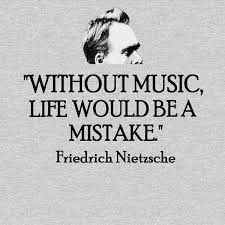 “Music is a way to dream together and go to another dimension.” – Cecilia Bartoli

“Music is the wine that fills the cup of silence.” – Robert Fripp

“Music produces a kind of pleasure which human nature cannot do without.” – Confucius

“Music in the soul can be heard by the universe.” – Lao Tzu 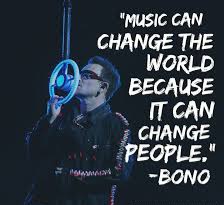 “The music is not in the notes, but in the silence between.” – Wolfgang Amadeus Mozart

“How is it that music can, without words, evoke our laughter, our fears, our highest aspirations?” – Jane Swan

“Music is the divine way to tell beautiful, poetic things to the heart.” – Pablo Casals

“After silence, that which comes nearest to expressing the inexpressible is music.” – Aldous Huxley

“If I had my life to live over again, I would have made a rule to read some poetry and listen to some music at least once every week.” – Charles Darwin

“Music is the shorthand of emotion.” – Leo Tolstoy 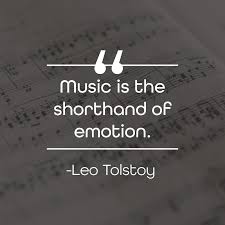 “Music is a weapon in the war against unhappiness.” – Jason Mraz

“One good thing about music, when it hits you, you feel no pain.” – Bob Marley

“Music is forever; music should grow and mature with you, following you right on up until you die.” – Paul Simon

“I believe 100 percent in the power and importance of music.” – James Taylor

“Music expresses that which cannot be said and on which it is impossible to be silent.” – Victor Hugo

“Music is to the soul what words are to the mind.” – Modest Mouse

“Any good music must be an innovation.” – Les Baxter

“Music drives you. It wakes you up, it gets you pumping. And, at the end of the day, the correct tune will chill you down.” – Dimebag Darrell

“In music the passions enjoy themselves.” – Friedrich Nietzsche

“Music is an outburst of the soul.” – Frederick Delius

“Who hears music feels his solitude peopled at once.” – Robert Browning

“Music is well said to be the speech of angels.” – Thomas Carlyle

“Music is a proud, temperamental mistress. Give her the time and attention she deserves, and she is yours. Slight her and there will come a day when you call and she will not answer. So I began sleeping less to give her the time she needed.” – Patrick Rothfuss

“Music, once admitted to the soul, becomes a sort of spirit, and never dies.” – Edward Bulwer-Lytton

“Good music is good music, and everything else can go to hell.” – Dave Matthews

“Music is the mediator between the spiritual and the sensual life.” – Ludwig van Beethoven

“Music is intended and designed for sentient beings that have hopes and purposes and emotions.” – Jacques Barzun

“Music is an element that should be part and parcel of every child’s life via the education system.” – Victoria Wood

“Music is the soundtrack of your life.” – Dick Clark

“If music be the food of love, play on.” – William Shakespeare 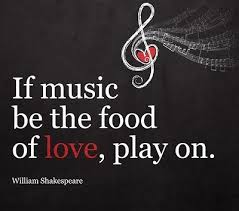 “Music is powerful. As people listen to it, they can be affected. They respond.” – Ray Charles

“Music is feeling. You can try to verbalize it. It really just hits you or it doesn’t.” – Gene Simmons

“I see my life in terms of music.” – Albert Einstein 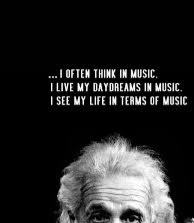 “Most people die with their music still locked up inside them.” – Benjamin Disraeli

“My music is – I don’t want to say my main focus, but it’s what comes most naturally to me.” – Gerard Way

“I like beautiful melodies telling me terrible things.” – Tom Waits

“Music is very spiritual, it has the power to bring people together.” – Edgar Winter

“Music is like a huge release of tension.” – James Taylor

“It’s pretty cool to see how far music can take you.” – Luke Bryan

“There is two kinds of music, the good, and the bad. I play the good kind.” – Louis Armstrong 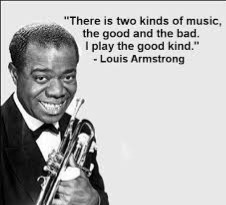 “It’s like if the music is loud enough I won’t be able to listen to my own thoughts.” – Nic Sheff

“Music is for every single person that walks the planet.” – Robert Plant

“I need music. It’s like my heartbeat, so to speak. It keeps me going no matter what’s going on – bad games, press, whatever!” – LeBron James

“Music and silence combine strongly because music is done with silence, and silence is full of music.” – Marcel Marceau

“Music – that’s been my education. There’s not a day that goes by that I take it for granted.” – Billie Joe Armstrong 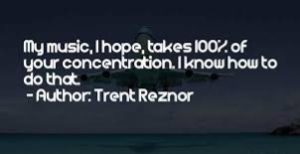 “Music is something that should speak for itself, straight from the heart. It took me a long time to understand that.” – Damon Albarn

“Music is the greatest communication in the world. Even if people don’t understand the language that you’re singing in, they still know good music when they hear it.” – Lou Rawls

“Music is a whole oasis in my head. The creation process is so personal and fulfilling.” – River Phoenix

“Music is a safe kind of high.” – Jimi Hendrix

“Music is the only thing I’ve ever known that doesn’t have any rules at all.” – Josh Homme 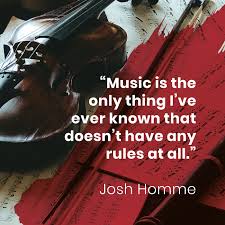 “Tell me what you listen to, and I’ll tell you who you are.” – Tiffanie DeBartolo

“Music was my refuge. I could crawl into the space between the notes and curl my back to loneliness.” – Maya Angelou

“The true beauty of music is that it connects people. It carries a message, and we, the musicians, are the messengers.” – Roy Ayers

“Music is a talent given to me by God. A medium and a platform and a way to spread a message of righteousness… a message of love, a message of unity.” – Stephen Marley

“Music is moonlight in the gloomy night of life.” – Jean Paul 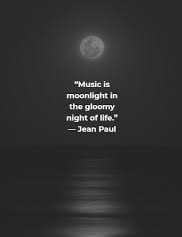 “The world’s most famous and popular language is music.” – Psy

“Music should strike fire from the heart of man, and bring tears from the eyes of woman.” – Ludwig van Beethoven

“My music fights against the system that teaches to live and die.” – Bob Marley

“That’s the amazing thing about music: there’s a song for every emotion. Can you imagine a world with no music? It would suck.” – Harry Styles

“That’s why people listen to music or look at paintings. To get in touch with that wholeness.” – Corita Kent

“Music is therapy. Music moves people. It connects people in ways that no other medium can. It pulls heart strings. It acts as medicine.” – Macklemore

“When you make music or write or create, it’s really your job to have mind-blowing, irresponsible, condomless sex with whatever idea it is you’re writing about at the time.” – Lady Gaga 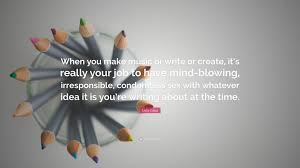 “Without music, life is a journey through a desert.” – Pat Conroy

“I think music in itself is healing. It’s an explosive expression of humanity. It’s something we are all touched by. No matter what culture we’re from, everyone loves music.” – Billy Joel

“Music has a poetry of its own, and that poetry is called melody.” – Joshua Logan

“Music is the art of the prophets and the gift of God.” – Martin Luther

“The cool thing about music is no one can take music away from you, writing wise.” – Darren Criss

“Music’s always been really cathartic. It’s the best drug for me to get away from the everyday pressures just for a second via a good song.” – Ville Valo

“Music is the emotional life of most people.” – Leonard Cohen 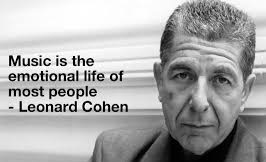 “Sometimes I feel like rap music is almost the key to stopping racism.” – Eminem

“Old music is the same as new music – it’s just a different way of delivering it.” – Jeff Lynne

“Music is the literature of the heart; it commences where speech ends.” – Alphonse de Lamartine

“Music is all about training in harmony, training to understand and use musical energy for our greater pleasure by attuning to the natural laws of the universe.” – Jane Siberry

“Music can name the unnameable and communicate the unknowable.” – Leonard Bernstein

“Music is a very big participant in everything I do, from the moment I wake up to the moment I go to bed.” – Zoe Saldana

“Music is love in search of a word.” – Sidney Lanier

“I’ve always felt music is the only way to give an instantaneous moment the feel of slow motion. To romanticise it and glorify it and give it a soundtrack and a rhythm.” – Taylor Swift

“I wanted to prove the sustaining power of music.” – David Bowie 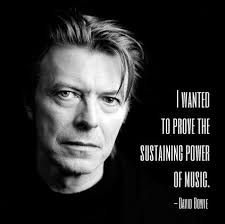 “Music is the tool to express life – and all that makes a difference.” – Herbie Hancock

“Music became a healer for me. And I learned to listen with all my being. I found that it could wipe away all the emotions of fear and confusion relating to my family.” – Eric Clapton

“It’s almost charity work, what people have done, turning other people on to my music.” – John Mayer

“I think wherever you go, when people hear good music, they will react to it.” – Wiz Khalifa 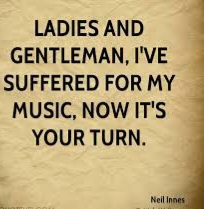 “You create a community with music, not just at concerts but by talking about it with your friends.” – David Byrne

“My music is best understood by children and animals.” – Igor Stravinsky

“Music enriches people’s lives in the same way paintings and literature do. Everybody deserves that.” – Victoria Wood

“Music comes from a place we don’t know.” – Chris Martin

“It’s never too late to do anything new when it comes to music.” – Sivamani

“A lot of music is mathematics. It’s balance.” – Mel Brooks 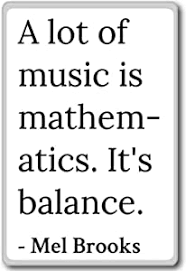 “The market didn’t define the music; the music defined the market.” – Charlie Hunter

“If you want to make beautiful music, you must play the black and the white notes together.” – Richard M. Nixon