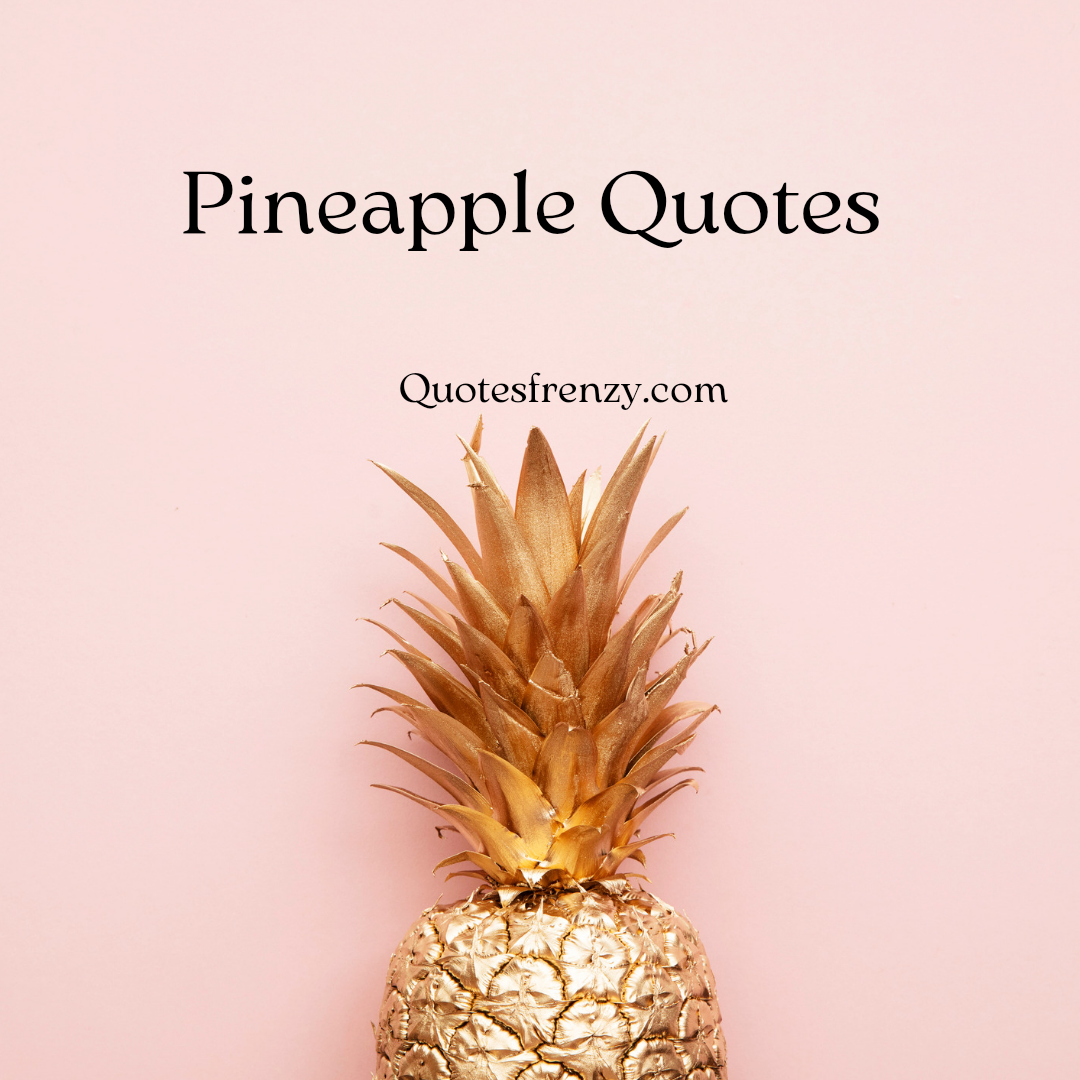 Pineapple Quotes-With a lot of people nowadays having role models in their lives, usually celebrities or other influential people, they tend to copy others, and thus also stop being unique and different. That is actually a sad thing overall, because we should be proud to be different from the others, and not scared as many would like to make it seem. There is absolutely nothing wrong with being different, no matter in which way, and more people should actually aim for this. Without further ado, let’s discuss about these pineapple quotes, which can help us all learn to embrace our unique side

“In a world full of apples, be a pineapple”. 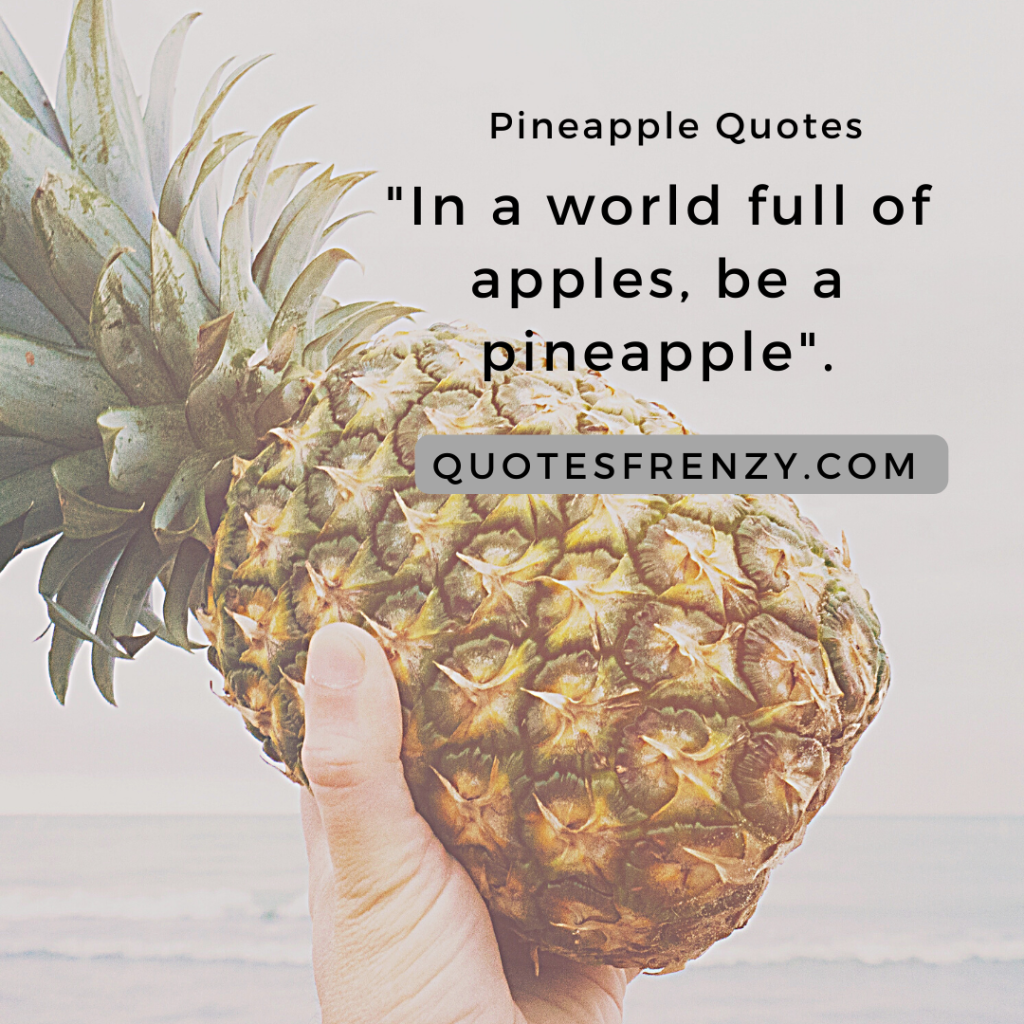 “Love is like a pineapple, sweet and undefinable.” Piet Pieterszoon Hein 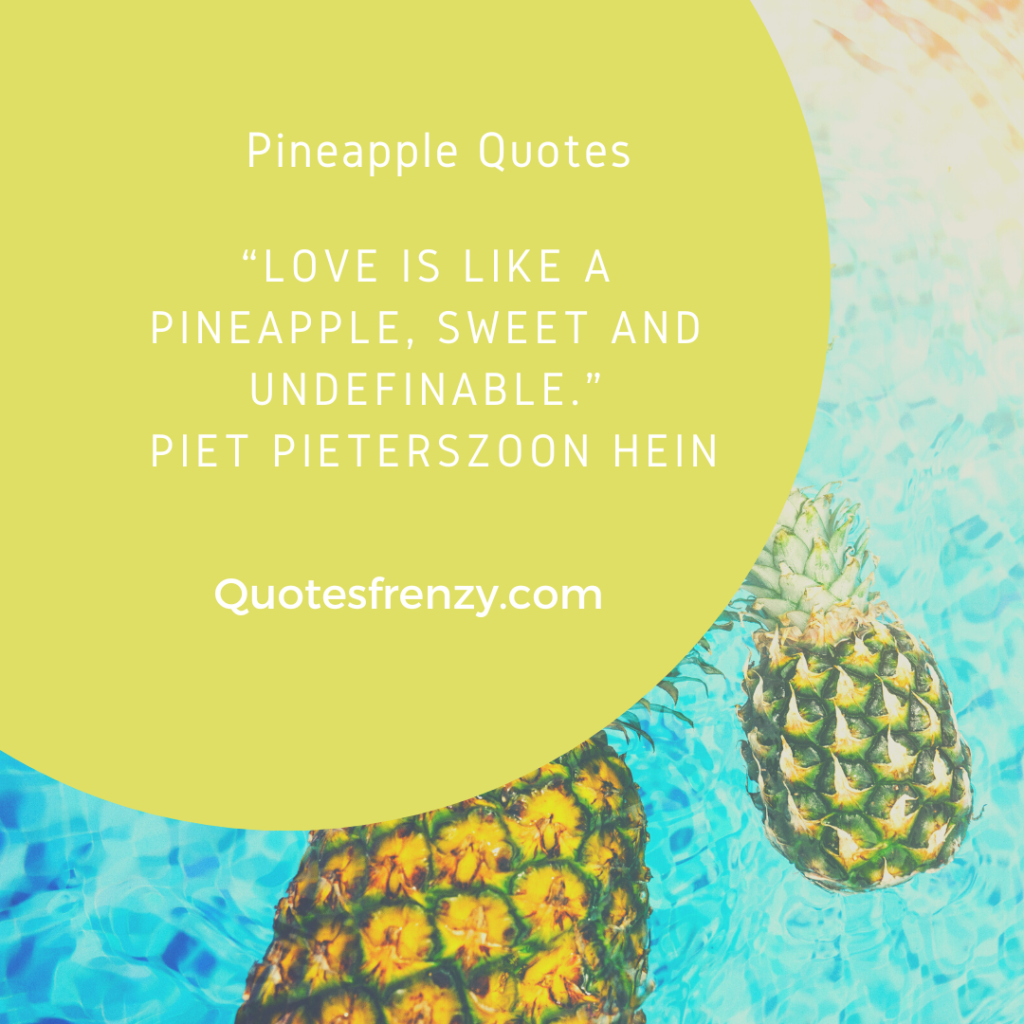 “He is the very pineapple of politeness.” Richard Brinsley Sheridan

“Maturity is most rapid in the low latitudes, where pineapples and women most do thrive.” Nathaniel Parker Willis 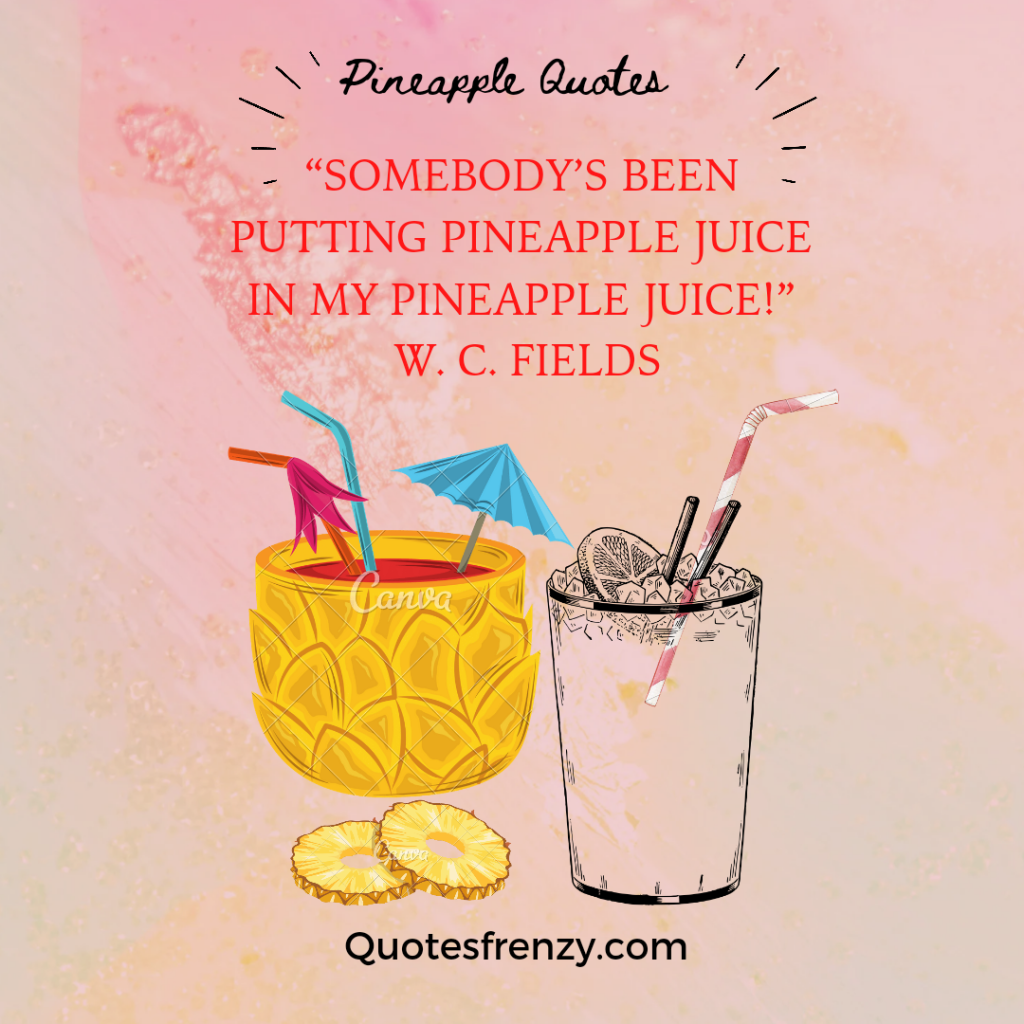 “I had a craving for pineapple and a pink cardigan” – Becky Bloomwood Shopaholic and Baby. ” Sophie Kinsella

“I don’t speak French, but I took it for five years growing up. So, if I were in a situation where I had to be, like,

‘Excuse me, pineapple dog house red, what time is it library?’ – no problem.” Eugene Mirman

“I thought ‘Pineapple Express’ was hilarious.” J. B. Smoove

“As a kid I’d play with homemade recipes, like putting pineapple on my face to exfoliate my skin and doing facial steams with lavender or peppermint oils. I just loved doing stuff like that. It’s what motivated me to launch my skin care line.” Demi Lovato

“A much larger value is consumed in lettuces than in pineapples,throughout Europe at large; and the superb shawls of Cachemere are, in France, a very poor object in trade, in comparison with the plain cotton goods of Rouen.’ Jean-Baptiste Say

“Where is it written that houses must be beige? Any dun colored house would look better if painted pineapple, cream, ochre, or even a smart sage.” Frances Mayes

“I don’t really cook much. I’m more of a baker. My favorite things to bake that everybody loves, and I can only keep in the house for about ten minutes, are 7-Up cake and Pineapple Upside-Down cake.” Jada Pinkett Smith

“There are certain areas where foreign investors can help the local people to generate wealth, and improve their quality of life. Some companies, for example, Del Monte, which produces pineapples in Kenya, pay a huge amount of taxes, I am sure, to the Kenyan government, and they do create jobs for thousands of locals.” Wangari Maathai

“Basically, we [me and Evan Goldberg] started thinking about making a movie that was kind of a weed movie and action movie and had a real kind of friendship story to it, then that would be our favorite movie [Pineapple Express] ever.” Seth Rogen

“If you sit in a bath of pineapple chunks, it can kill you. That’s well documented.” Karl Pilkington 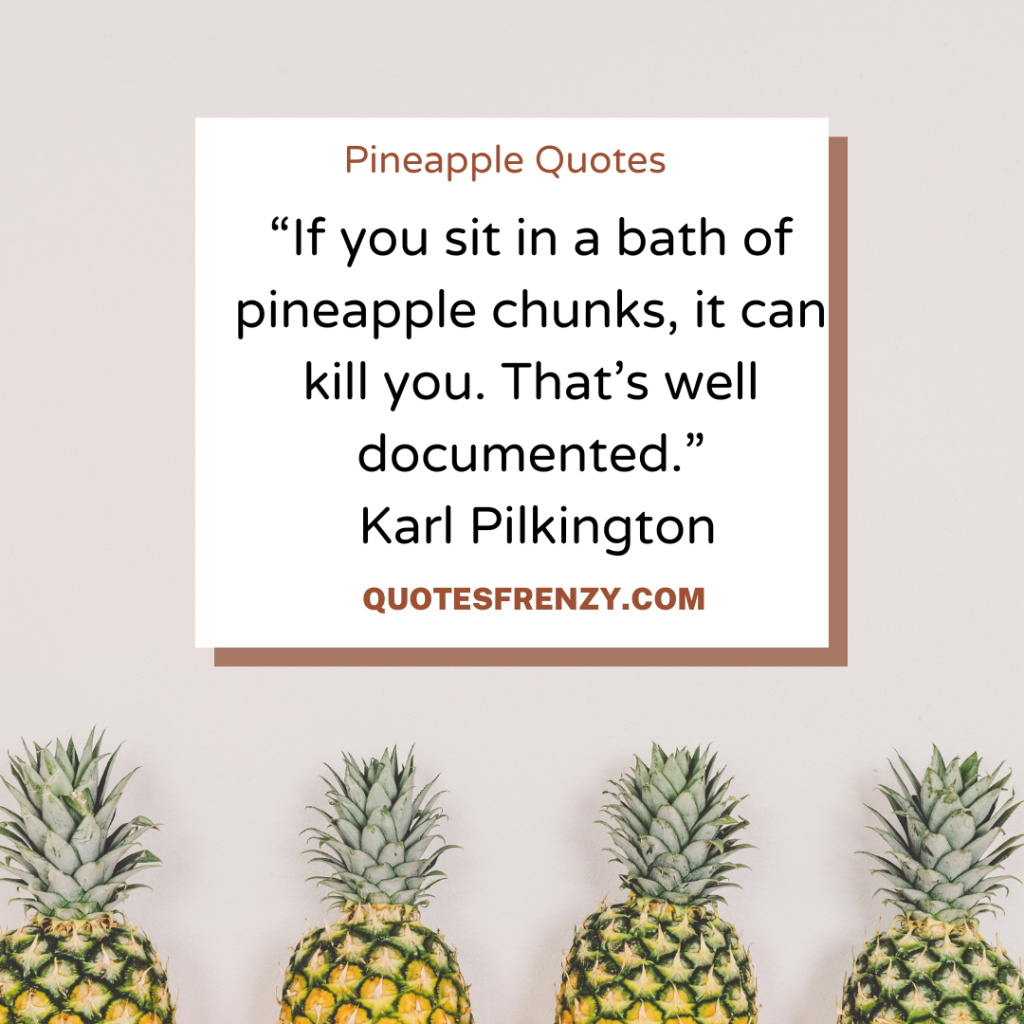 “The difference between this film [Your highness] and Pineapple Express was pretty much in the logistics of the technical ambition of the movie, and the size and scope of the movie. Pineapple Express was a great success, and that was something that we wanted to capitalize on, but we wanted this movie to be bigger, more adventuresome, bring a bigger audience to the movie, and challenge ourselves to do something new.” David Gordon Green

“I can’t wait to get off the stage, because I’ve got some LifeSavers in my pocket and pineapple is next!” Mitch Hedberg

“(Imitating a Belarus citizen commenting on their national flag) Stupid National Anthem….Look at this flag; Two bears fighting over a pineapple. What kind of message does that send to the world? Come to Belarus, where wild animals will steal your fruit.” Bill Baile

“Be a pineapple. Stand tall, wear a crown and be sweet on the inside.” 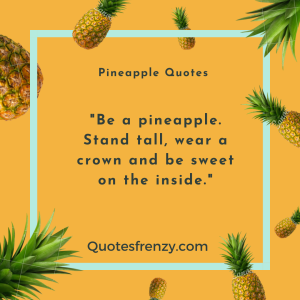 “I always like to start my morning with a good amount of fruit. I really like pineapple, particularly because of the enzymes that it has. Sometimes I have oatmeal. But if I’m feeling like I really want to be watching my weight more, then I definitely do a protein, like an omelet, scrambled eggs or some smoked salmon.” Cynthia Nixon

“I describe my music as a mix of juices – Tropicana orange juice and a little bit of off-brand pineapple juice. I guess you could call it generic-brand pineapple-wave.” Mike Tucker

“Pick up a sunflower and count the florets running into its centre, or count the spiral scales of a pine cone or a pineapple, running from its bottom up its sides to the top, and you will find an extraordinary truth: recurring numbers, ratios and proportions.” Charles Jencks

“I am a disaster magnet. I came home from our first anniversary vacation with jellyfish stings, a puncture wound from a wrought iron pineapple and a cork-shaped bruise in my cleavage.” Molly Harper

“Making [Pineapple Express] was a blast. I’d kind of gotten to the point professionally where I was pretty emotionally exhausted from making dramatic films.” Seth Rogen

“They [Seth Rogen and Evan Goldberg] thought of this brilliant pot, or whatever, movie [Pineapple Express], an action movie and I guess they figured in a small role for a blonde. And they say that I did my part well.” I added tears to the movie.    Seth Rogen

“The scene with Danny [McBride] and the cake and all of that [in the Pineapple Express], most of that is improvised, I would say. But you would never know, to me anyway, and that’s what is always amazing.” Seth Rogen

A pineapple has pointy defenses, but it’s still sweet. Be a pineapple. – Pineapple Quotes 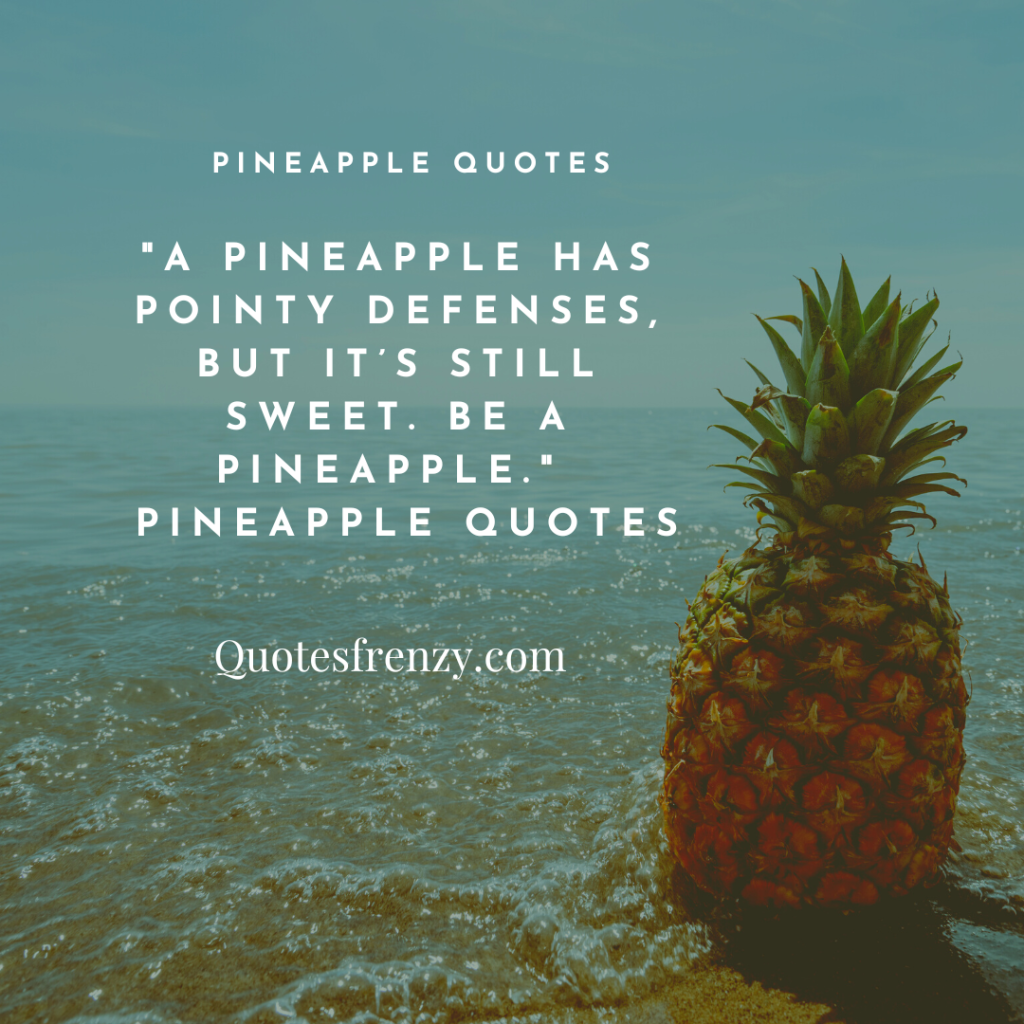 This quote pretty much tells us that we should always be kind and very good on the inside, while not necessarily showing it to everyone. We might even want to put a different image to some people, but that should never change who we truly are, and it shouldn’t change our values at all. On the contrary, we should always remain kind, regardless of the circumstances or the things which we’re going through.

Be a pineapple. Stand tall, wear a crown and be sweet on the inside. – Pineapple Quotes


Quite similar to the quote above, this one also tries to make us kind on the inside, while showing greatness to the others, and making them understand that we do not fear anything. Usually, it’s a great idea not to show your weaknesses to anyone, and we should always remember that because otherwise it can come back and harm us.

I chose to discuss in this article only about these three pineapple quotes. That’s because the rest of them are quite similar, and it wouldn’t make any sense to keep going. One last thing I would like to point out is that it’s quite funny how we can learn life lessons even from such quotes, which might seem as rather pointless at first, but they’re really not if we look closely into them.