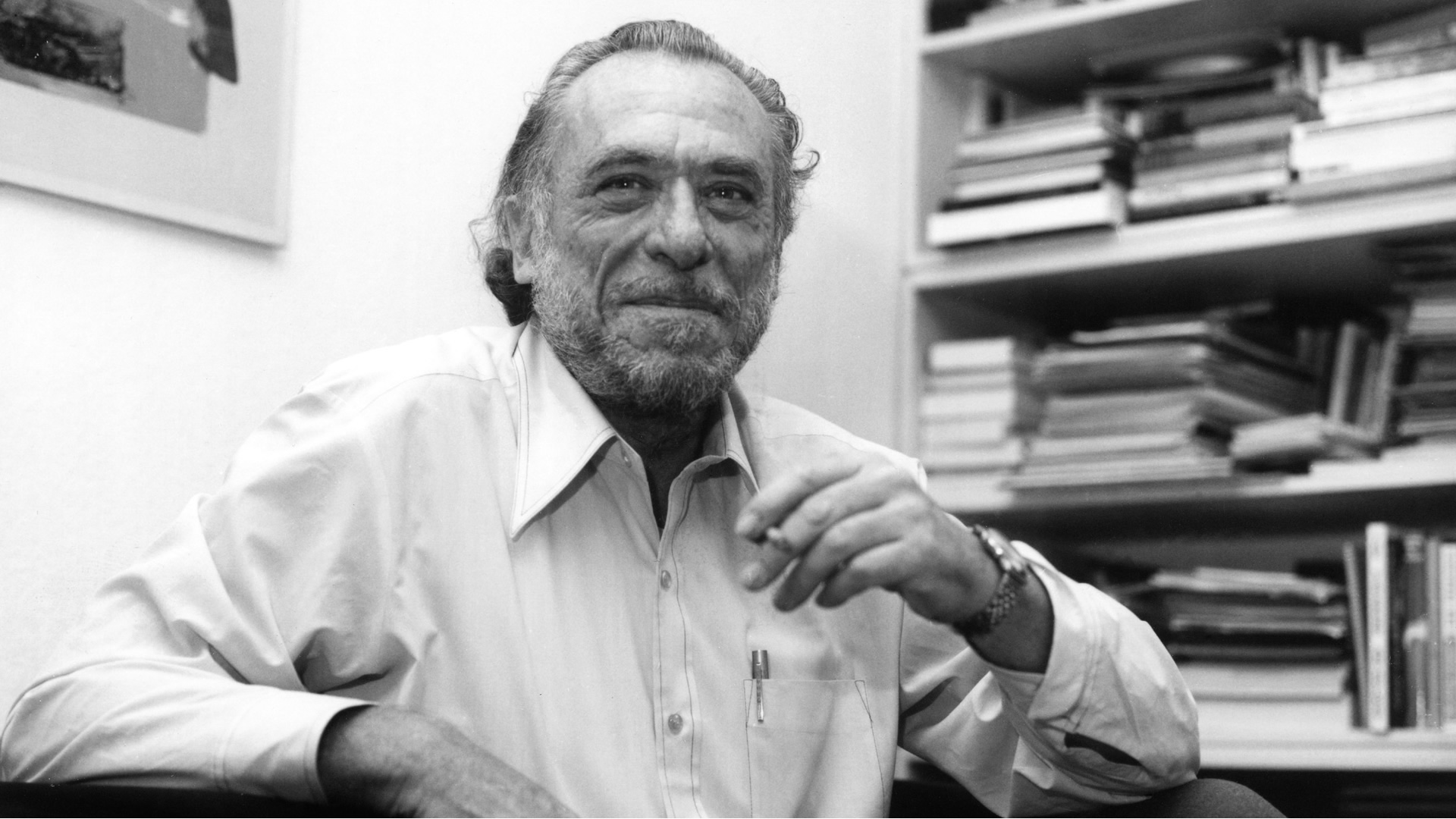 Looking for the best Charles Bukowski quotes and sayings? We’ve compiled a list of the top 80+ most inspiring Bukowski quotes on life, love, happiness, failure, passion and more.

“Find what you love and let it kill you.”

“I wanted the whole world or nothing.” 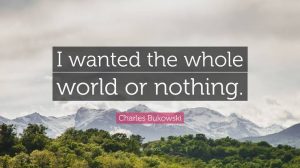 “We don’t even ask happiness, just a little less pain.”

“People empty me. I have to get away to refill.“ 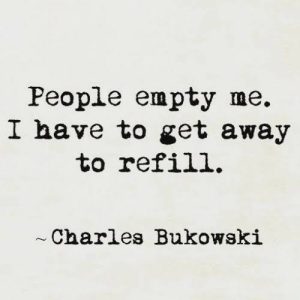 “I don’t hate people, I just feel better when they aren’t around.”

“If you have the ability to love, love yourself first.”

“Love is a word used too much and much too soon.”

“Love is a fog that burns with the first daylight of reality.”

“You don’t go on “probably” when love and guns are in hand.”

“When love becomes a command, hatred can become a pleasure.”

“Love breaks my bones and I laugh.”

“Love needs too much help.Hate takes care of itself.”

“Love be damned now as love was damned when it first arrived.”

“In this room,the hours of love, still make shadows.”

“Our disappointment sits between us.”

“I want to be with you. It’s as simple, and as complicated as that.”

“That’s what friendship is, sharing the prejudice of experience.“

“When a hot woman meets a hermit one of them is going to change.”

“Of course it’s possible to love a human being if you don’t know them too well.”

“My whole life has been a matter of fighting for one simple hour to do what I want to do.”

“Some people never go crazy. What truly horrible lives they must lead.”

“No light goes out until it goes out. Let’s fight as men, not rats. Period.” 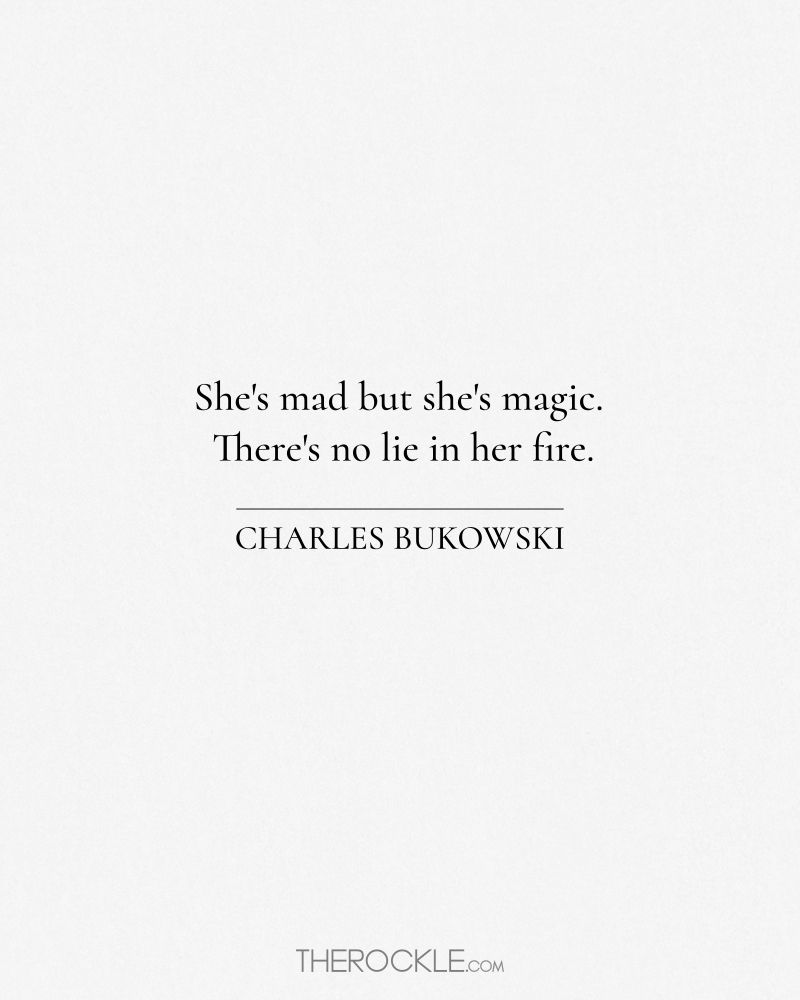 “A love like that was a serious illness, an illness from which you never entirely recover.”

“Many a good man has been put under the bridge by a woman.”

“Maybe she hadn’t saved the world but she had made a major improvement.”

“People run from rain but sit in bathtubs full of water.“

“My heart is a thousand years old. I am not like other people.”

“If I stop writing I am dead. And that’s the only way I’ll stop: dead.”

“If you want to know who your friends are, get yourself a jail sentence.”

“Some people never go crazy, What truly horrible lives they must live.”

“If I bet on humanity, I’d never cash a ticket.“

“Style is important. Many people scream the truth but without style it is helpless.”

“It’s when you begin to lie to yourself in a poem in order to simply make a poem, that you fail.”

“It’s possible to love a human being if you don’t know them too well.”

“Sometimes I’ve called writing a disease. If so, I’m glad that it caught me.”

“Genius might be the ability to say a profound thing in a simple way.”

You have to die a few times before you can really live.”

“An intellectual says a simple thing in a hard way. An artist says a hard thing in a simple way.”

“Real loneliness is not necessarily limited to when you are alone.“

“I was a man who thrived on solitude; without it I was like another man without food or water.“

“In my work, as a writer, I only photograph, in words, what I see.”

“Everything you own must be able to fit inside one suitcase; then your mind might be free.“

“I am a series of small victories and large defeats.“

If you’re losing your soul and you know it, then you’ve still got a soul left to lose.”

“I wasn’t much of a petty thief. I wanted the whole world or nothing.“

“It’s better to do a dull thing with style than a dangerous thing without it.”

“I guess the only time most people think about injustice is when it happens to them.”

“What matters most is how well you walk through the fire.”

regret is mostly caused by not having
done anything.

“There are only two things wrong with money: too much or too little.”

“Almost everybody is born a genius and buried an idiot.”

“Handle the psychic overload. It’s like trying to carry a full garbage can on your back over a rushing river of piss.”

“Sometimes you climb out of bed in the morning and you think, I’m not going to make it, but you laugh inside – remembering all the times you’ve felt that way.”

“How the hell could a person enjoy being awakened at 6:30AM, by an alarm clock, leap out of bed, dress, force-feed, shit, piss, brush teeth and hair, and fight traffic to get to a place where essentially you made lots of money for somebody else and were asked to be grateful for the opportunity to do so?”

“Somebody once asked me what my theory of life was, and I said, ‘Don’t try.’ That fits the writing, too. I don’t try; I just type.”

“Poetry is what happens when nothing else can.” “People are strange: they are constantly angered by trivial things, but on a major matter like totally wasting their lives, they hardly seem to notice.”

“When I say that basically writing is a hard hustle, I don’t mean that it is a bad life, if one can get away with it. It’s the miracle of miracles to make a living by the typer.” “Goodness can be found sometimes in the middle of hell.” “There will always be something to ruin our lives, it all depends on what or which finds us first. We are always ripe and ready to be taken.”

“I remember awakening one morning and finding everything smeared with the color of forgotten love.”

“Pain is strange. A cat killing a bird, a car accident, a fire…. Pain arrives, BANG, and there it is, it sits on you. It’s real. And to anybody watching, you look foolish. Like you’ve suddenly become an idiot. There’s no cure for it unless you know somebody who understands how you feel, and knows how to help.”

“You begin saving the world by saving one man at a time; all else is grandiose romanticism or politics.”

“This is very important – to take leisure time. Pace is the essence. Without stopping entirely and doing nothing at all for great periods, you’re gonna lose everything…just to do nothing at all, very, very important. And how many people do this in modern society? Very few. That’s why they’re all totally mad, frustrated, angry and hateful.”

“Show me a man who lives alone and has a perpetually clean kitchen, and 8 times out of 9 I’ll show you a man with detestable spiritual qualities.”

“I don’t like the clean-shaven boy with the necktie and the good job. I like desperate men, men with broken teeth and broken minds and broken ways. They interest me. They are full of surprises and explosions.”

“When I write, when I’m going hot, I don’t want to write more than four hours in a row. After that, you’re pushing it.”

“My days, my years, my life has seen up and downs, lights and darknesses. If I wrote only and continually of the ‘light’ and never mentioned the other, then as an artist, I would be a liar.”

“The more cats you have, the longer you live. If you have a hundred cats, you’ll live 10 times longer than if you have 10. Someday this will be discovered, and people will have a thousand cats and live forever. It’s truly ridiculous.”