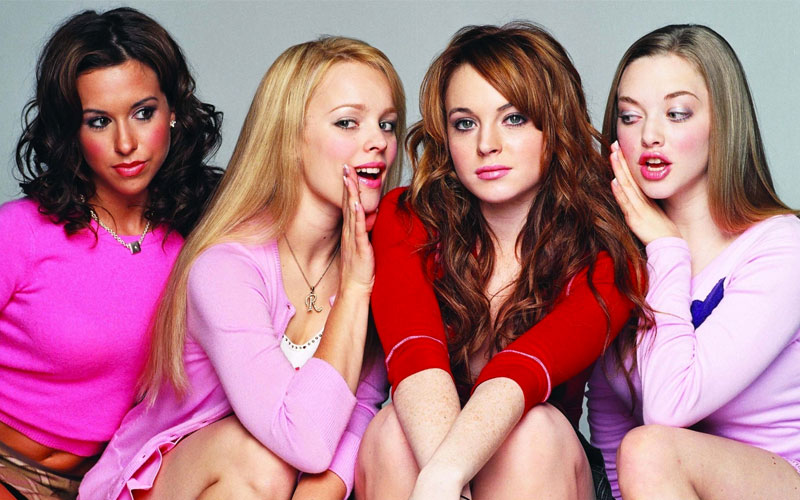 “I’m sorry that people are so jealous of me. But I can’t help it that I’m popular.” – Gretchen Wieners

“Coach Carr, step away from the underage girls!” – Mr. Duvall

“Don’t have sex. Because you will get pregnant. And die.” – Coach Carr

“Janis Ian: What is that smell?
Cady Heron: Oh, Regina gave me some perfume
Janis Ian: You smell like a baby prostitute
Cady Heron: Thanks.”

“I know I may seem like a bitch, but that’s only because I’m acting like a bitch.” – Cady Heron

“The limit does not exist!” – Cady Heron 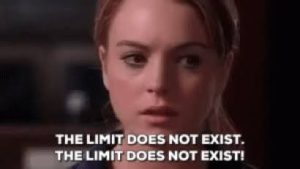 “Raise your hand if you have ever been personally victimized by Regina George?” – Ms. Norbury (she watches all students and teachers raise hands)

That was so fetch.” – Gretchen Wieners 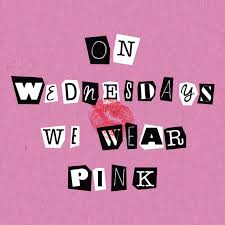 “I hate her! I mean, she’s really failing me on purpose, just because I didn’t join that stupid Mathletes! She was so queer, she was like, “I’m pusher Cady, I’m a pusher.” – Cady Heron

“That is the ugliest f-ing skirt I’ve ever seen.” – Regina George

“Did you have an awesome time? Did you drink awesome shooters, listen to awesome music, and then just sit around and soak up each others awesomeness?” – Janis Ian

“She made out with a hot dog.” – Karen Smith

“Halloween is the one night a year when girls can dress like a total slut and no other girls can say anything about it.” – Cady Heron

“Make sure you check out her mom’s boob job. They’re hard as rocks!” – Gretchen Weiners

“Somebody wrote in that book that I’m lying about being a virgin, ’cause I use super-jumbo tampons, but I can’t help it if I’ve got a heavy flow and a wide-set vagina!” – Bethany Byrd

“I just wanted to say that you’re all winners. And that I couldn’t be happier the school year is ending.” – Mr. Duvall

“I know she’s kind of socially retarded and weird, but she’s my friend… so, just promise me you won’t make fun of her!” – Regina George

“Oh, I love seeing teachers outside of school. It’s like seeing a dog walk on its hind legs.” – Janis Ian

“There are two kinds of evil people in this world. Those who do evil stuff and those who see evil stuff being done and don’t try to stop it.” – Janis Ian

“Irregardless, ex-boyfriends are just off limits to friends. I mean that’s just like the rules of feminism.” – Gretchen Weiners

“Half the people in this room are mad at me, and the other half only like me because they think I pushed somebody in front a bus, so that’s not good.” – Cady Heron

“Don’t have sex. Because you will get pregnant, and die. Don’t have sex in the missionary position, don’t have sex standing up, just… don’t do it. Promise? Alright, everybody grab some rubbers.” – Coach Carr

“This is Susan from Planned Parenthood. I have her test results. If you could have her call me as soon as she can? It’s urgent. Thank you!” – Regina George

“I don’t know why. Its probably because I have a big, fat LESBIAN crush on you. Suck on that! Aye aye aye!” – Janis Ian

“I’m kind of psychic. I have a fifth sense… It’s like I have ESPN or something. My breasts can tell when it’s gonna rain.” – Karen Smith

“Somebody wrote in the book that I’m lying about being a virgin because I use XXL tampons, but It’s not my fault I have a heavy flow and a wide-set vagina!” – Bethany 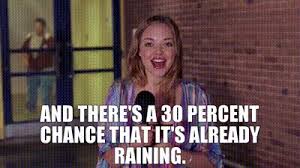 “(On the phone) Oh, this is Suzanne from planned parenthood. Can you get her to call us back? We have her test results. It’s urgent. (Puts phone down) She’s not going anywhere!” – Regina George

“And on the third day, God created the Remington bolt-action rifle, so that Man could fight the dinosaurs. And the homosexuals.” – Homeschooled Boy 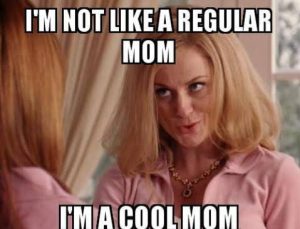 “Somebody wrote in that book that I’m lying about being a virgin because I use super jumbo tampons… but I can’t help it if I’ve got a heavy flow and a wide set vagina!” – Bethany Byrd

“I mean no offense, but how could she send you a candy cane? She doesn’t even like you that much. Maybe she feels weird around me because I’m the only person who knows about her nose job. Oh my god, pretend you didn’t hear that.” – Gretchen Weiners

“Karen Smith: So if you’re from Africa, why are you white?
Regina George: Oh my god Karen! You can’t just ask people why they’re white.”

“She’s so pathetic. Let me tell you something about Janis Ian. We were best friends in middle school. I know, right? It’s so embarrassing. I don’t even… Whatever. So then in eighth grade, I started going out with my first boyfriend Kyle who was totally gorgeous but then he moved to Indiana, and Janis was like, weirdly jealous of him. Like, if I would blow her off to hang out with Kyle, she’d be like, “Why didn’t you call me back?” And I’d be like, “Why are you so obsessed with me?” So then, for my birthday party, which was an all-girls pool party, I was like, “Janis, I can’t invite you, because I think you’re lesbian.” I mean I couldn’t have a lesbian at my party. There were gonna be girls there in their *bathing suits*. I mean, right? She was a LESBIAN. So then her mom called my mom and started yelling at her, it was so retarded. And then she dropped out of school because no one would talk to her, and she came back in the fall for high school, all of her hair was cut off and she was totally weird, and now I guess she’s on crack.” – Regina George

“Cady: So, are you gonna send any candy canes?
Regina: No. I don’t send them, I just get them. So you better send me one, byotch.”

“Cady: Hi, I don’t know if anyone told you about me, I’m a new student here, my name is Cady Heron.
Kristen Hadley: Talk to me again and I’ll kick your ass!”

Looks like he’s headed for the projection room above the auditorium!” 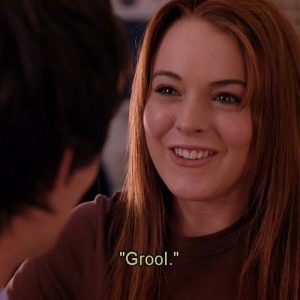 Mr. Duvall: Miss Smith? Karen Smith: Whoever wrote it probably didn’t think anyone would ever see it? Mr. Duvall: I hope that nobody else ever does see it.

“You wanna do something fun? You wanna go to Taco Bell?”

So that’s against the rules, and you can’t sit with us.”

“Fine! You can walk home, bitches.”

“I used to think there was just fat and skinny. But apparently there’s lots of things that can be wrong on your body.”