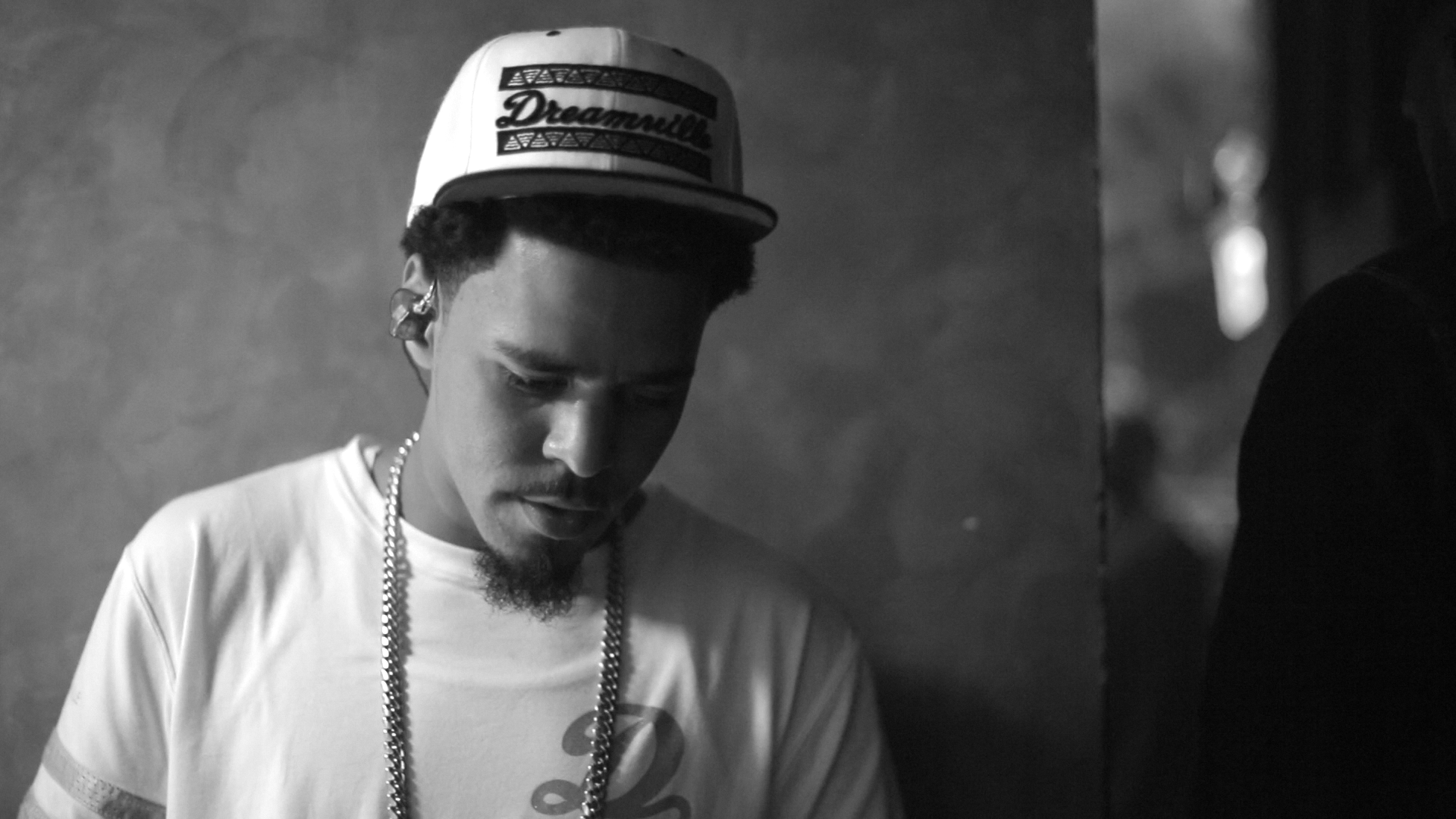 Looking for the best J Cole quotes? We’ve compiled a list of the top 70 most inspiring J. Cole quotes and sayings.

“I put a lot of pressure on myself. I think something’s not good enough, and I won’t stop until I feel like I’ve made it. I’m never satisfied.”

“I feel like this: Whatever is in your path and in your heart, you need to do.”

“We got dreams and we got the right to chase ’em.”

“I keep my head high, I got my wings to carry me. I don’t know freedom, I want my dreams to rescue me.”

“Never give up until you’ve given out all your very best. It’s better to fail trying, than wondering what could have happened if you tried.”

“It’s beauty in the struggle, ugliness in the success.”

“To appreciate the sun, you gotta know what rain is.”

“Anything’s possible, you gotta dream like you never seen obstacles.”

“If you ain’t aim too high, then you aim too low!”

“Take a chance, because you never know how perfect something can turn out.”

“They say time is money but really, it’s not. If we ever go broke, time is all we got.”

“You are perfect exactly as you are. With all your flaws and problems, there’s no need to change anything. All you need to change is the thought that you aren’t good enough.”

“I’d rather be happy being myself than sad trying to please everyone else.”

“I’ve always been an underdog. I feel like I beat the odds.”

“I always feel like it’s two key ingredients when it comes to following your dreams, making something happen that the average person deems difficult. If you truly believe it, that’s step one. Step two, is, you know, the hard work that goes along with it.”

“One thing you should know about me is I never play to lose. Always aim high and rarely obey the rules.”

“People congratulate me. I just tell them God is good.”

“Keep grindin’ boy, your life can change in one year, And even when it’s dark out, the sun is shining somewhere.” “If they don’t know your dreams, they can’t shoot them down.”

“I’m here to spread a message of hope. Follow your heart. Don’t follow what you’ve been told you’re supposed to do.”

“I want people to follow their dreams, yes… but I’m not interested in telling young black kids how to be rappers… I want to show them that there’s so many other paths you can take, besides a rapper or basketball player.”

“My life accelerated, but had to wait my turn. But then I redecorated, that means my tables turn.”

“Hard to move on when you always regret one.”

“If I was to go to sleep before midnight, I would feel weird about myself, like I wasted a day. My most productive hours are between midnight and five.”

“In this life ain’t no happy endings. Only pure beginnings followed by years of sinning and fake repentance.”

“The same ones you love will bring you pain.” “I’m a super-duper over-analyzer. You mix that with self-doubt and pressure, and that’s never healthy.”

“People think because I’ve got some success, I’ve made it, but in my eyes it’s like, ‘How long has Jay Z been in the business? How many albums has he got?’ Not that I’m trying to be Jay Z, but I am trying to be around for a long time.”

“Life is a movie, pick your own role, Climb your own ladder or you dig your own hole.”

“Nothing lasts forever, but at least we’ve got these memories.”

“Am I about dollars or about change? Am I about knowledge or brains? Freedom or big chains? They don’t feel my pain.”

“I’m half-black, half-white, so I basically put it like this: I can fit in anywhere. That’s why I write so many stories from so many different perspectives, because I’ve seen so many.”

“I just feel like, with rappers, there’s so much complacency. It’s like, ‘Oh, I’m a rapper. I’m successful. I make money. That’s all that matters.’ But there’s a lot of stuff going on in the world. Whether or not you’re aware of it, it’s happening.”

“No rapper in the world from Jay-Z to Tupac to Biggie has 100 percent love on everything they do.”

“I had a lot of resistance, and not just to fame. I was always conscious of not changing.” “I’m not gonna be bad at anything, and I want to actually be the best at anything I’m doing. So if I’m playing basketball, if I’m taking the SATs, like, there’s a competitive spirit behind it. With production, it’s the same thing.”

“I do put a lot of God in my music, but not because I’m super religious. There are a lot of demons in my music, too. I acknowledge both.”

“There was the time I bought three cars in the span of three or four weeks. It was crazy; it wasn’t greedy. It was mine, my girl’s, my mom’s. I got Benzes for my ladies. But I felt crazy. You have to understand I come from a world where we’re very modest. But that’s not greedy. That’s nice, right?”

“You can’t reverse fame. You can lose all the money, but you’ll never lose people knowing you.”

“I actually started off majoring in computer science, but I knew right away I wasn’t going to stay with it. It was because I had this one professor who was the loneliest, saddest man I’ve ever known. He was a programmer, and I knew that I didn’t want to do whatever he did.”

“I struggled with being a broke college graduate, and while all my friends were getting career jobs, I was working horrible part-time jobs. That’s why now, even when I get tired, I think, ‘This is what I asked for.”

“As much as it might look like, to someone else, that I’m successful, I never feel like I’m anywhere. The further I go, I still feel equally further from my eventual goal. Because as I grow, I get more goals. I’m never content.”

“When I was in college my girl got me a job at the doctor’s office she was working at. I was a file clerk. No disrespect but I don’t think a man can do that job. It takes so much meticulous and precise file-keeping.”

“I have a little bit of that gamer spirit in me. I just don’t have the time to be a gamer. But in another life, I would be one.”

“College isn’t in everyone’s hearts. I am living proof, though, that school doesn’t mess up your plans. It gives you more experiences to write about.” “I pay attention to lyrics and I know what rap fans care about. I try to write for the average listener and I’m conscious of the mainstream without selling out.”

“The thing about being an artist today is you get to develop right in front of people’s eyes before you even put out an album.”

“I worked in ad sales. I would call up local businesses and try to get them to buy ads in the paper. The whole time, I felt like I was just scamming people.”

“There’s still value in a CD, even if it’s just nostalgic. People are still willing to pay. But it can’t compare to a digital-only release where you can control the exact time that it’ll come out, you know what I mean? So whoever finds how to bridge that gap is gonna make a lot of money.”

“There’s always people out there that’s like, doubting me, you know what I mean? Even though I do embrace the people that embrace me and I’m grateful for them. But I always feel like, man, there’s still people out there that’s not giving it up. And I feel like I’m doing everything the right way, you know what I mean? I’m really going out of my way to do it the right way. I’m taking very few cheats – very few cheat codes that I’m using.”

“College had a great deal to do with my development as a person. I don’t know if I’d be the artist I was if it wasn’t for goin’ to school like that. School is a good place – it ain’t for everybody, but I think it’s for most people.”

“Producing all my own songs and refusing to go to the hot producer. That’s the biggest risk I’ve taken so far.”

“It’s no coincidence that all the greatest rappers – whoever you put in your top five – I guarantee you they are great storytellers.”

“One day, I’ll be listening to a bunch of Ray Charles, the next day it’s nothing but Red Hot Chili Peppers. The next day it might be Tupac all day.”

“Tupac was just so passionate about what he believes in and not afraid to say anything.” “The thing about being an artist today is you get to develop right in front of people’s eyes before you even put out an album.”

“When you’re a rapper, just a rapper, you have to kind of settle for whatever comes your way – if a beat is hot, you wanna rap on it, period.”

“The music becomes more pure and soulful when it’s true, and it has to be true these days with the way the internet works, and the way the game works, everyone wants authentic raps.”

“My parents were divorced by the time I was even conscious – like, I don’t remember them ever being together.”

“I met Will Smith twice. I didn’t talk to him for too long but I was trying to let him know that my age group grew up watching him – he was the coolest guy on television and the coolest guy in movies.”

“I’m not a conscious rapper, all those things we talk about, the struggle, the pain, the outlook to the future, keep your head up. I try to put all those positive things into a regular human character, which is myself.”

“I still wanna rap better than everybody else, and I wanna say important things.”

“There’s a story behind every person, a reason why they are the way they are. So, think about that before you judge someone.”