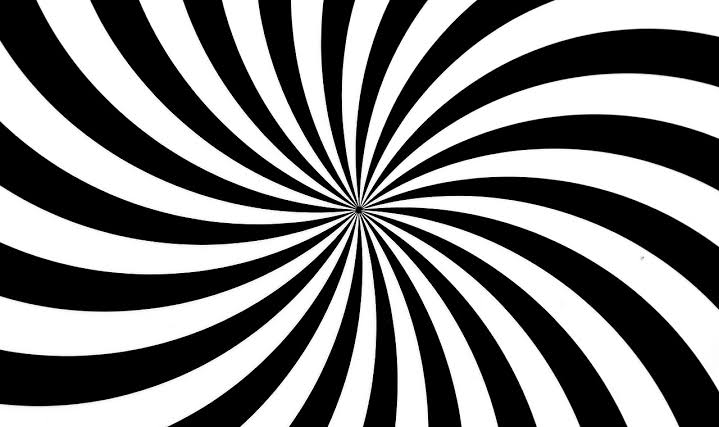 The question of what is right or wrong, good or bad, acceptable, tolerable or unacceptable is one leading cause of most conflicts around the world. From the wars in Iran, Aleppo, West Bank, etc.; difference in view if fuelling so many crises resulting in deaths and financial losses. 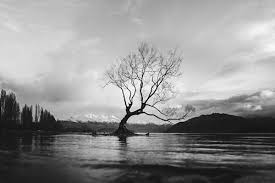 “Black and white is mix of toughest simplicity and easiest complexity.” Vikram, Corpkshetra

“No person is completely wicked, just as no person is perfect. We are all grey” Sweety Shinde

“I see the world in black and white, and I don’t like compromising.” Greta Thunburg 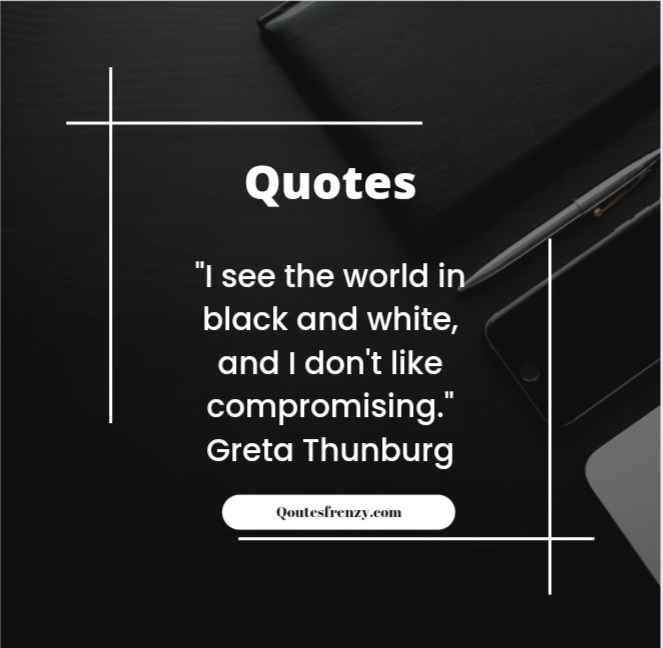 “When you’re the victim of the behavior, it’s black and white; when you’re the perpetrator, there are a million shades of gray.” Laura Schlessinger

“I really see food as subjective. It’s a creative outlet. It’s something that you do for fun. It’s a gray area. It’s not black and white or right and wrong.” Graham Elliot

“I generally don’t think most situations can be labeled as black or white.” Heath Ledger 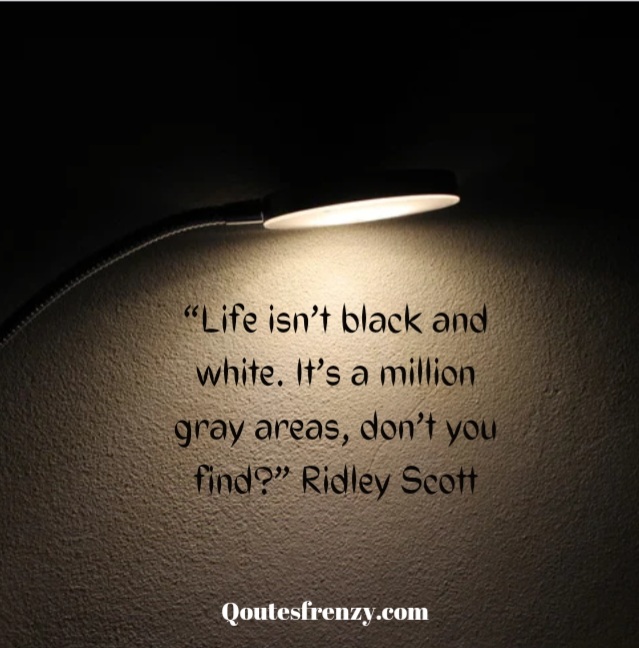 “I’m seeing the world partially through the eyes of a kid. Not all the time. There’s no black and white to it. But sometimes I’m seeing it like I’m 4.” Steven Wright

“Nothing is black or white, nothing’s ‘us or them.’ But then there are magical, beautiful things in the world. There’s incredible acts of kindness and bravery, and in the most unlikely places, and it gives you hope.” Dave Matthews

“The great thing about getting older is that you become more mellow. Things aren’t as black and white, and you become much more tolerant. You can see the good in things much more easily rather than getting enraged as you used to do when you were young.” Maeve Binchy

“The way I was brought up by my parents and guided through my football life by the influences of various managers means that in some ways I am black and white.” Stuart Pearce

“If everything isn’t black and white, I say, ‘Why the hell not?” John Wayne 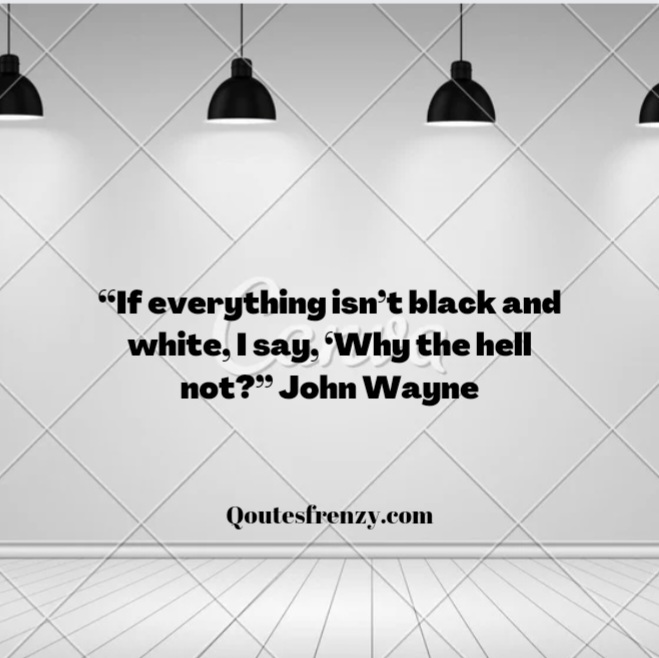 “My philosophy, like color television, is all there in black and white.” Graham Chapman

“Light is meaningful only in relation to darkness, and truth presupposes error. It is these mingled opposites which people our life, which make it pungent, intoxicating. We only exist in terms of this conflict, in the zone where black and white clash.” Louis Aragon

“The mosts colorful thing in the world is black and white; it contains all colors and at the same time excludes all.” Vikram, Corpkshetra 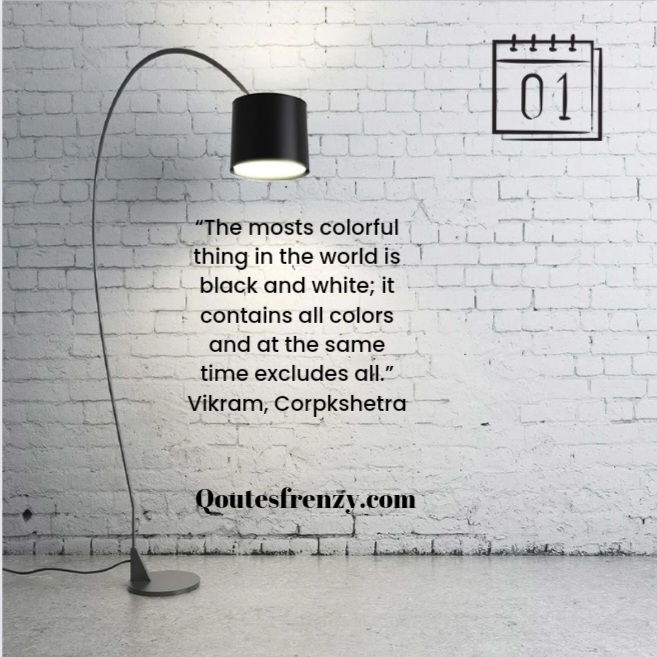 “Black and white is how it should be, but shades of grey are the colors I see.” Billy Joel

“Look at any black-and-white movie; everybody is smoking.” Loni Anderson

“There’s so much grey to every story – nothing is so black and white.” Lisa Ling 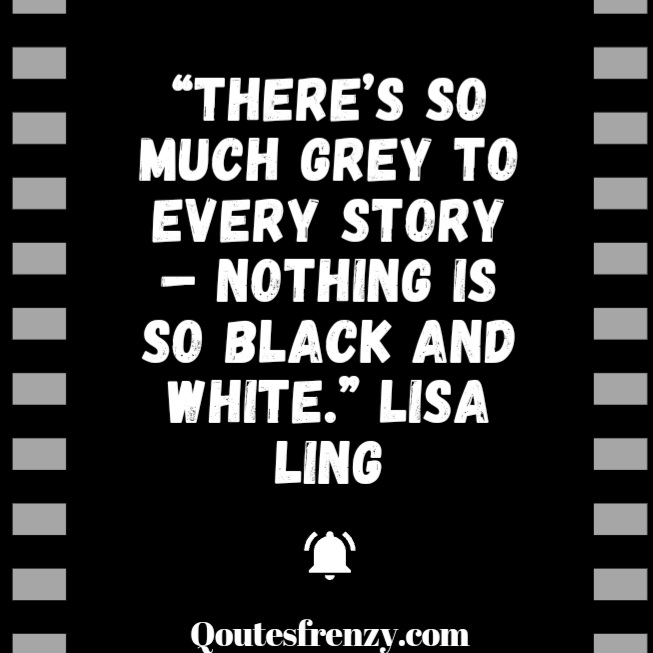 “There’s something strange and powerful about black-and-white imagery.” Stefan Kanfer

“…gender is not sane. It’s not sane to call a rainbow black and white.” Kate Bornstein

“I think the truth is black-and-white .” Nancy Grace

“Colour is everything, black and white is more.” Dominic Rouse 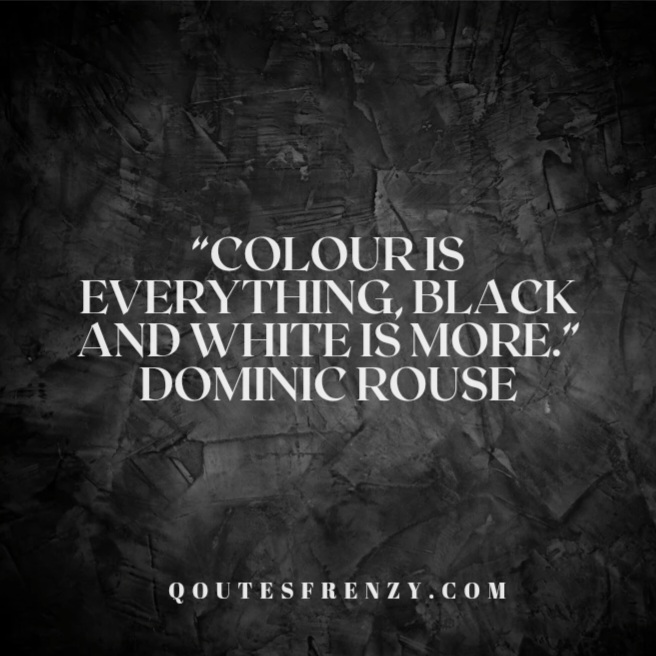 “Everything isn’t black and white, but for me it might as well be.” Bruce Gilden

“It’s hard to live your life in color, and tell the truth in black and white.” Gregg Allman

“Human nature is not black and white but black and grey.” Graham Greene

“Life is in color, but black and white is more realistic.” Samuel Fuller

“I don’t see the world completely in black and white. Sometimes I do.” Benicio Del Toro 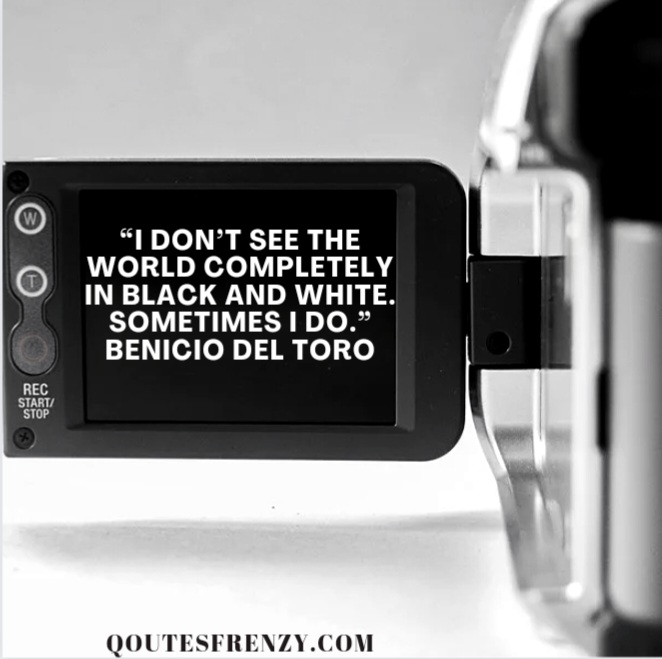 “With the black and white films, one was concerned with tone.” Julie Harris

“The outside world is black and white with only one color dead.” Peter Gabriel

“I love… anything in black and white. Just put it on the TV, I’ll watch.” Anna Chlumsky

“Maybe black and white is the best medium for landscapes, I don’t know.” Fay Godwin

“Color can do anything that black-and-white can.” Vincente Minnelli

“Life is about the gray areas. Things are seldom black and white, even when we wish they were and think they should be, and I like exploring this nuanced terrain.” Emily Giffin

“Black and white might be sufficient. But why deprive yourself of color.” Christian Dior

“Black and white creates a strange dreamscape that color never can.” Jack Antonoff

“Most of life is grey, with a little tiny bit of black and white.” Bill Henson

“Human beings are not black and white.” Hugh Panaro

“We are all somewhere or the other a little grey, not black and white. We have our imperfections.” Kriti Sanon

“Color is descriptive. Black and white is interpretive.” Elliott Erwitt

“Things are not quite so simple always as black and white.” Doris Lessing 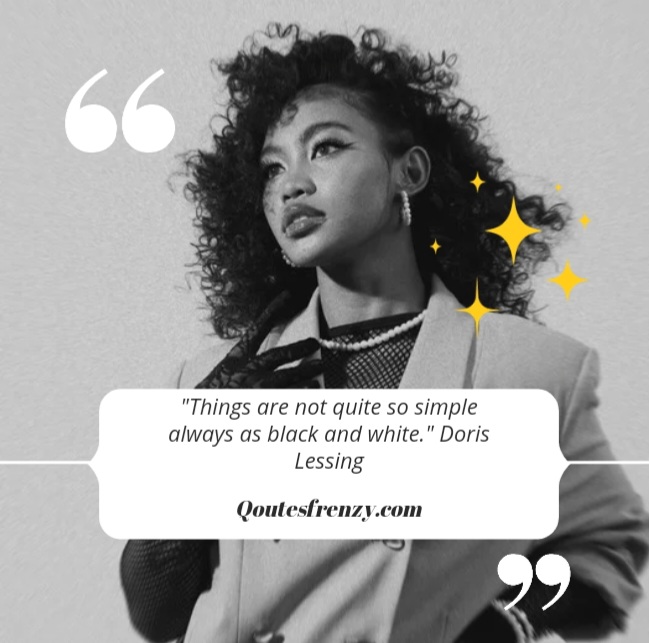 “Freedom would be not to choose between black and white but to abjure such prescribed choices.” Theodor W. Adorno

“Life is not black and white; there is some gray nuance to it.” Pilou Asbaek

“The natural response of the old-timers is to build a strong moral wall against the outside. This is where the world starts to be painted in black and white, saints inside, and sinners outside the wall.” Mary Douglas

Things that distort your true reflection

It is a state where everything revolves around you and your feelings. When the only view that is right or the only thing that is correct has to be what you say, then understand that you are on an ego trip.

There are different ways to get a single task done, but when an individual seem to be all wrapped up in himself, he pays little or no attention to no other people’s opinion. There is more in diversity than holding on to one’ perspectivecan achieve. Lack of consideration for others can kill their self-esteem and creativity.

Timidity or low self-worth could make it impossible for even the person with the most beautiful ideas to perfectly blend into the team and then deny the group of such brilliant ideas.

How to reflect your true nature

No one is complete without others and so allowing other to air their views is the best way to get better results. People also feel more sense of belonging when they are a part of the decision-making process.

People develop at different levels, and it is everyone’s duty to help others discover themselves and evolve. Criticizing or yelling at others would kill their morale and not assist them in contributing their quota. While some person learns faster other are slow learners, but they all have their place in making a bigger team more successful.

For those with self-esteem issues, understand that a lot works better when you make your contributions known. To experience fulfillment it sometimes pays to step out of yourself and be involved. April Mae Monterrosa’s Black and White Quotes states

“Its not easy taking your own advice, accepting what you don’t like hearing, & seeing the grey amongst the black & white.”

Finding your true reflections in people requires trusting others, cutting them some slack and loving them the way they are.