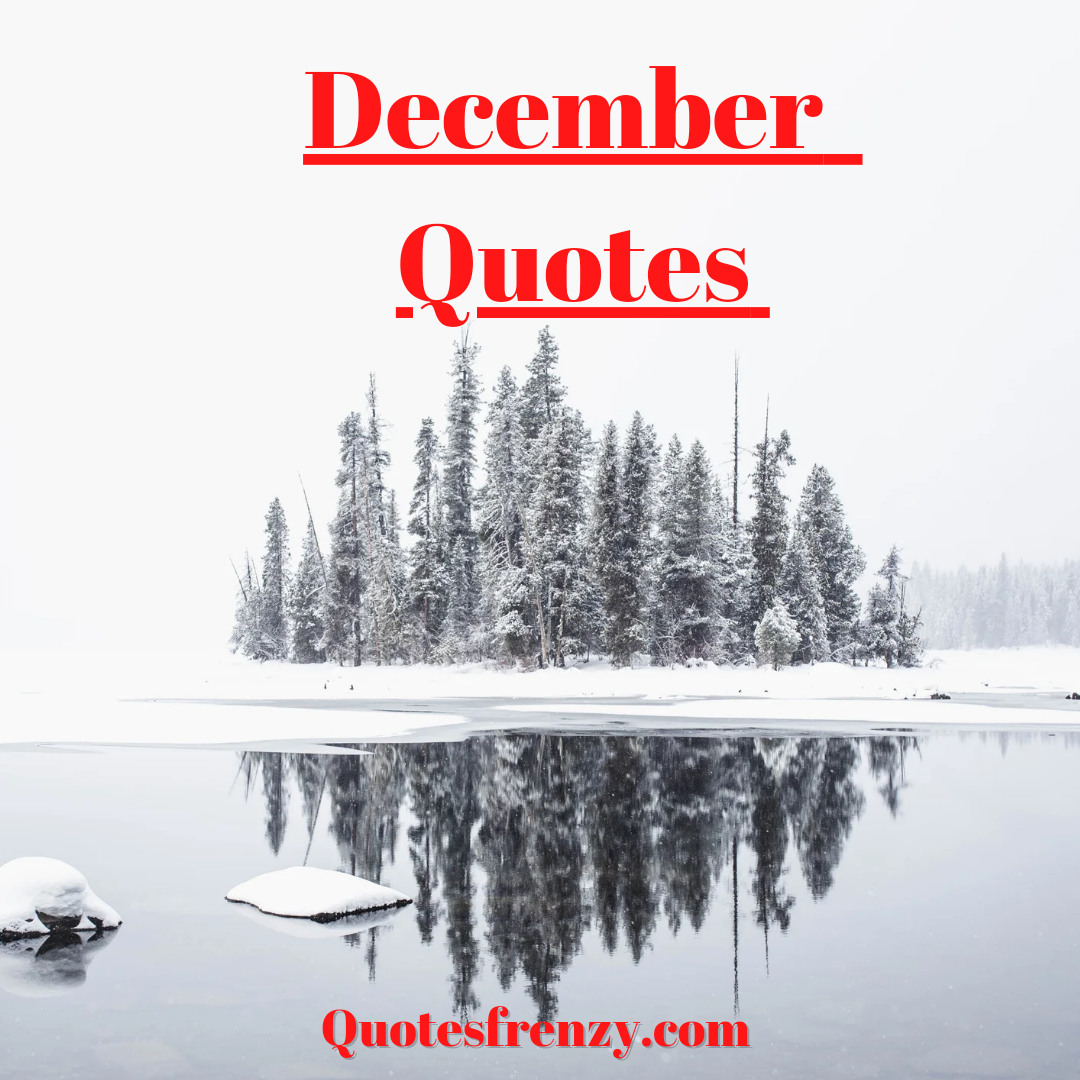 December is definitely on the top of most peoples’ favorite month of the year.When cool winds came all-around, December of memories came.

Here is a list of  top quotes about December, you can relate to your memories ….

“December, being the last month of the year, cannot help but make us think of what is to come.” – Fennel Hudson 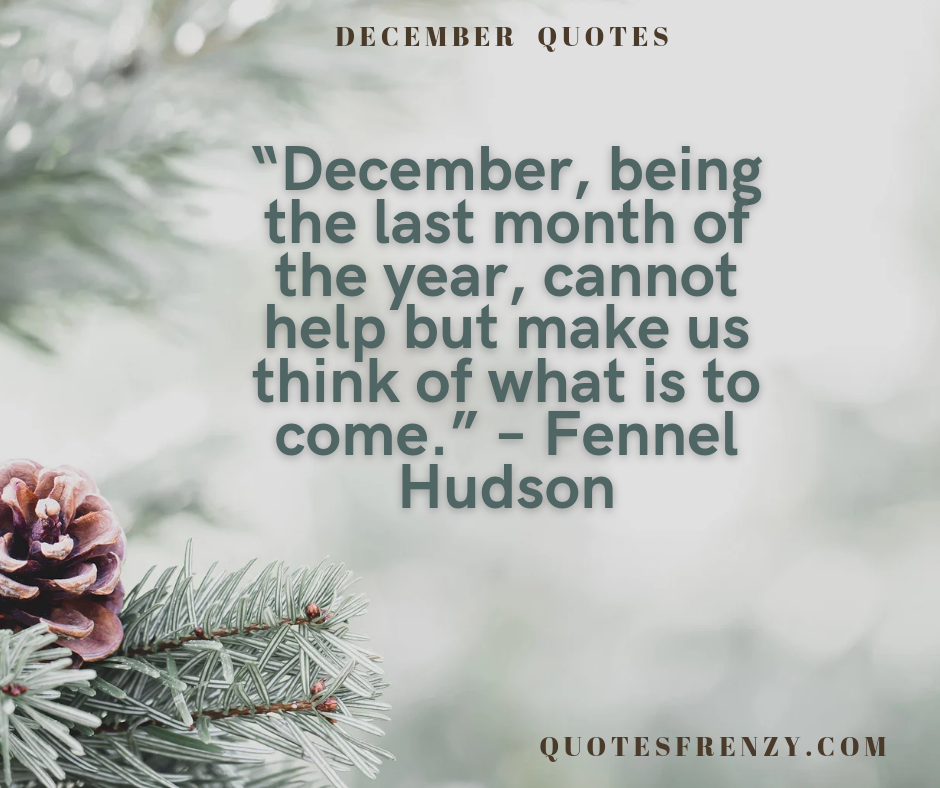 This looks like a December day, it looks like we’ve come to the end of the way.” – Willie Nelson

“It seems like everything sleeps in winter, but it’s really a time of renewal and reflection.” – Elizabeth Camden

“The cold is coming. December’s winter solstice. Start of the season.” – Robert Pettit

“May and October, the best-smelling months? I’ll make a case for December: evergreen, frost, wood smoke, cinnamon.” – Lisa Kleypas, Love in the Afternoon

“In the winter she curls up around a good book and dreams away the cold.” – Ben Aaronovitch

“As we struggle with shopping lists and invitations, compounded by December’s bad weather, it is good to be reminded that there are people in our lives who are worth this aggravation, and people to whom we are worth the same.” – Donald E. Westlake 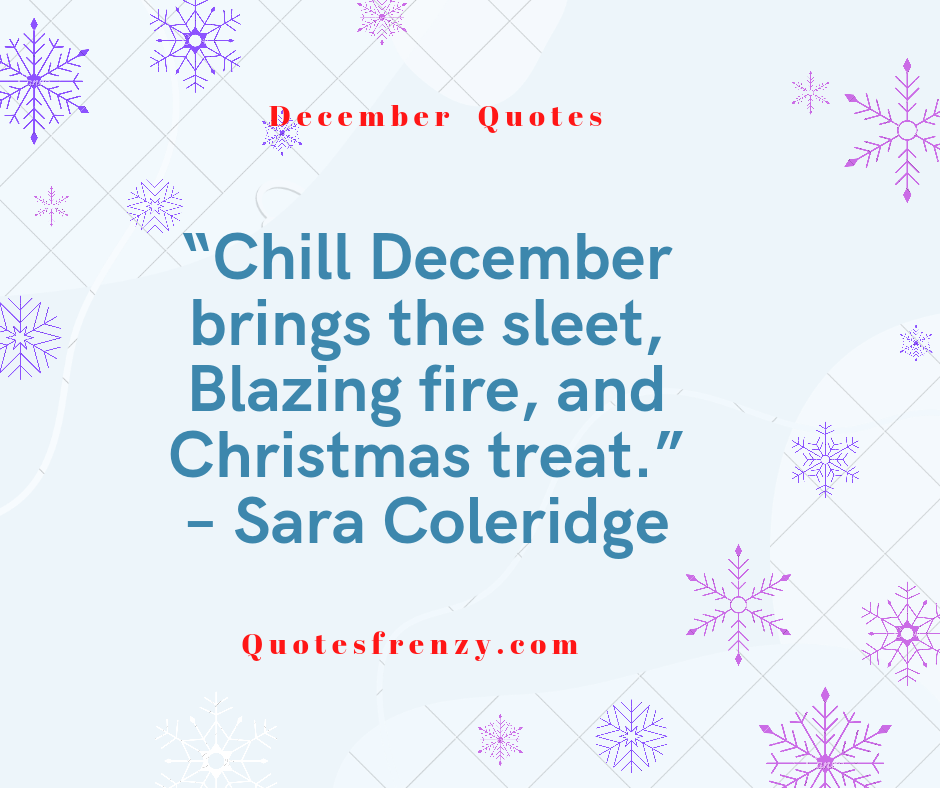 “God gave us memory so that we might have roses in December.” – James M. Barrie

“Outside the house, it was storming, a busy downfall of flakes that the wind blew lightly across acres of old snow left from December.” – Gladys Hasty Carroll

“When I was a child, my December weekends were spent making cards, decorating the tree, hanging the wreath, and preparing brandy butter and peppermint creams.” – Pippa Middleton

“In this world only winter is certain.” – George R.R. Martin

“If we make it through December, everything’s gonna be all right; it’s the coldest time of winter and I shiver when I see the falling snow.” – Merle Haggard 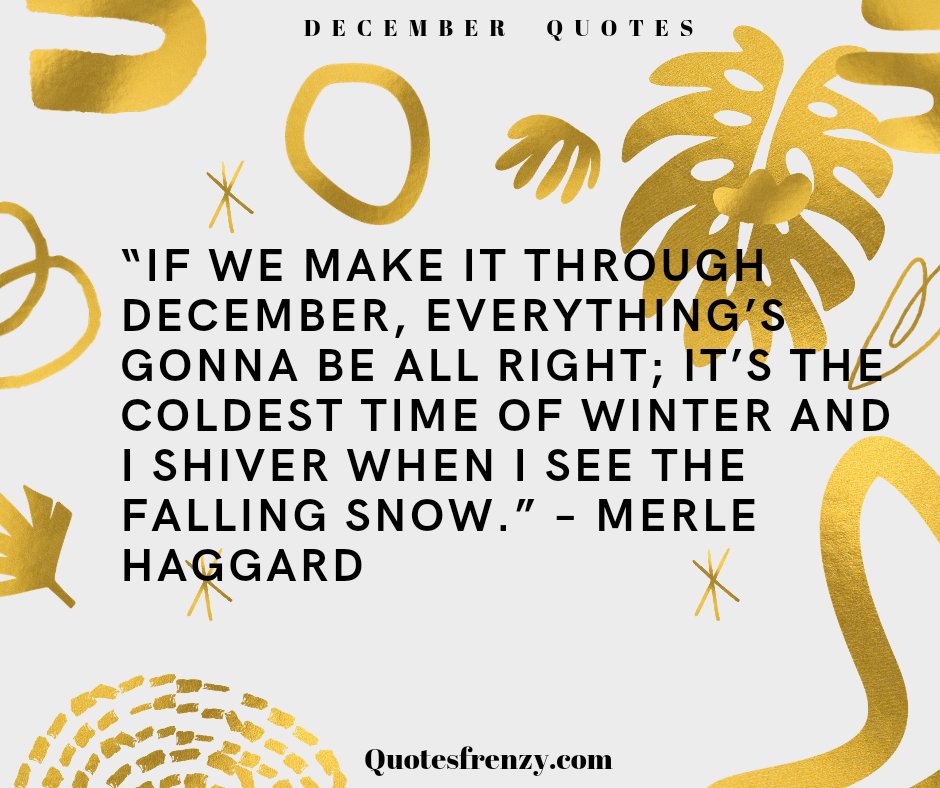 “Will love be true as December frost, or fickle and fall like the rose in June?” – Clement Scott

“There is October in every November and there is November in every December! All seasons melted in each other’s life!” – Mehmet Murat ildan

“I know. I’m lazy. But I made myself a New Years’ resolution that I would write myself something really special. Which means I have ‘til December, right?” – Catherine O’Hara

“I miss being in Barbados in December. That is the time I always remember. The smell of varnish on the wooden floors. And the smell of paint on the wooden doors. The crowds in de Supermarket buying up the rum, and the music blasting. Puh rup a pum pum.” – Charmaine J Forde

“Of all the months of the year there is not a month one half so welcome to the young, or so full of happy associations, as the last month of the year.” – Charles Dickens 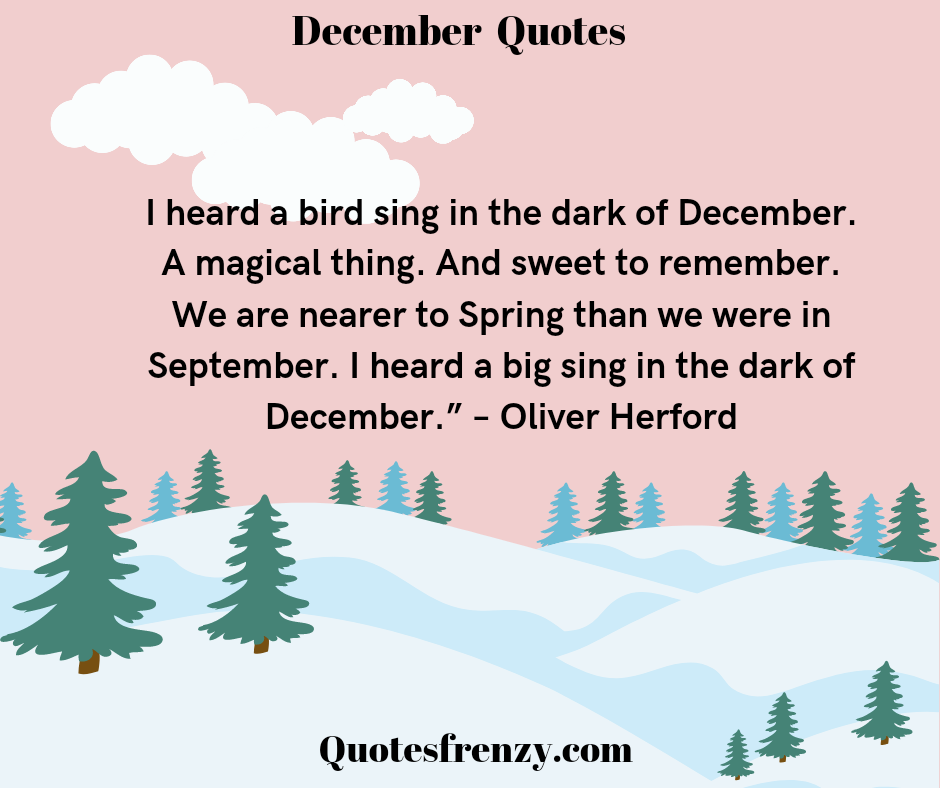 Nothing ever seems too bad, too hard, or too sad when you’ve got a Christmas tree in the living room.” – Nora

“It was snowing. It was always snowing at Christmas. December, in my memory, is white as Lapland, though there were no reindeers. But there were cats.” – Dylan Thomas

“Shout now! The months with loud acclaim, Take up the cry and send it forth; May breathing sweet her Spring perfumes, November thundering from the North. With hands upraised, as with one voice, They join their notes in grand accord; Hail to December! Say they all, It gave to Earth our Christ the Lord!” – J.K. Hoyt

“It is December, and nobody asked if I was ready.” – Sarah Kay

“If cold December gave you birth, The month of snow and ice and mirth, Place on your hand a Turquoise blue, Success will bless whatever you do.” – Unknown

“Yet my heart loves December’s smile as much as July’s golden beam; then let us sit and watch the while the blue ice curdling on the stream.” – Emily Jane

“And last December drear, with piteous low-drooped head. In a voice of desolation crying out, ‘The year is dead. And so, with changeful gear, with smile or frown or song, the months, in strange variation, are ever gliding along.” – Edgar Fawcett

“December is the toughest month of the year. Others are July, January, September, April, November, May, March, June, October, August, and February.” – Mark Twain 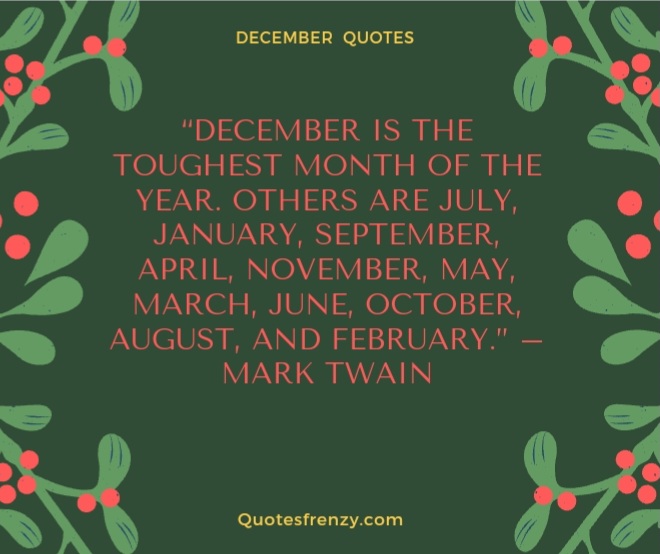 “No matter what my fortune may be, or where I may roam, in December, I’ll be going home.” – Floyd Huddleston

“December is the holdout month, all the others torn away.” – Anne Gisleson

“I love the food and drinks in December. I don’t love to eat so much that I get nauseous. I just love to eat little things and enough.” – seaofwordsx

“I prefer winter and fall when you feel the bone structure of the landscape – the loneliness of it, the dead feeling of winter. Something waits beneath it; the whole story doesn’t show.” – Andrew Wyeth

“A bare tree stands with roots on both ends in December days.” – Kiran Bantawa 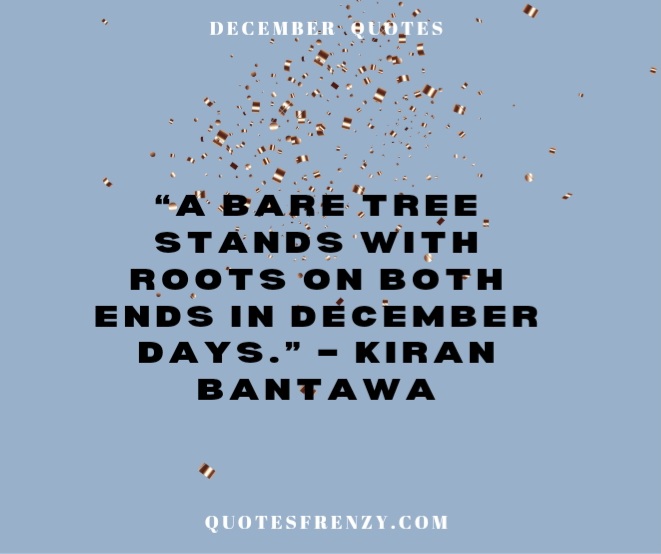 “December. A desperate celebration of an end.” – Chandrama Deshmukh

“By December an elastic skin of ice reached out hundreds of miles into the sea, rolling with every wave.” – Will Chancellor

“Through the small tall bathroom window the December yard is gray and scratchy, the trees calligraphic.” – Dave Eggers

“From December to March, there are for many of us three gardens – the garden outdoors, the garden of pots and bowls in the house, and the garden of the mind’s eye.” – Katherine S. White

“The crisp path through the field in this December snow, in the deep dark, where we trod the buried grass like ghosts on dry toast.” – Dylan Thomas 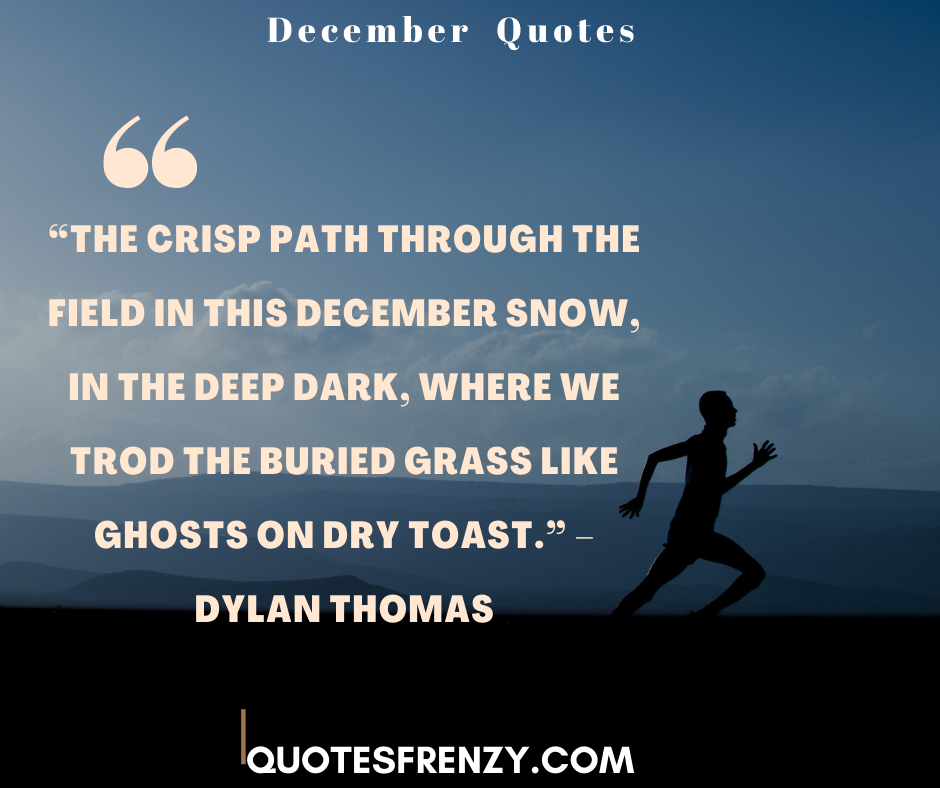 “My brothers and sisters, true love is a reflection of the Savior’s love. In December of each year, we call it the Christmas spirit. You can hear it. You can see it. You can feel it.” – Thomas S. Monson

“December drops no weak, relenting tear, By our fond Summer sympathies ensnared. Nor from the perfect circle of the year Can even Winter’s crystal gems be spared.” – Christopher Pearce Cranch

“In a drear-nighted December, Too happy, happy brook, Thy bubblings ne’er remember Apollo’s summer look; But with a sweet forgetting, They stay their crystal fretting, Never, never petting About the frozen time.” – John Keats

“It likes me well—December’s breath,

Although its kiss be cold,

Nor yet the year is sealed in Death, 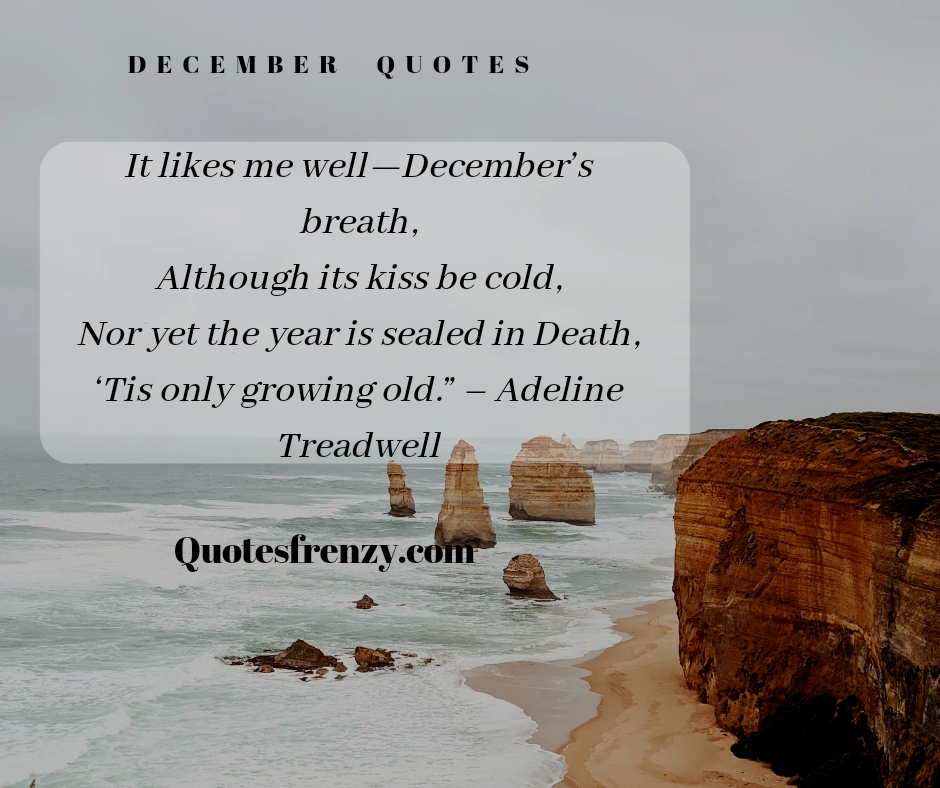 “How did it get so late so soon?

December is here before it’s June.

My goodness how the time has flewn. 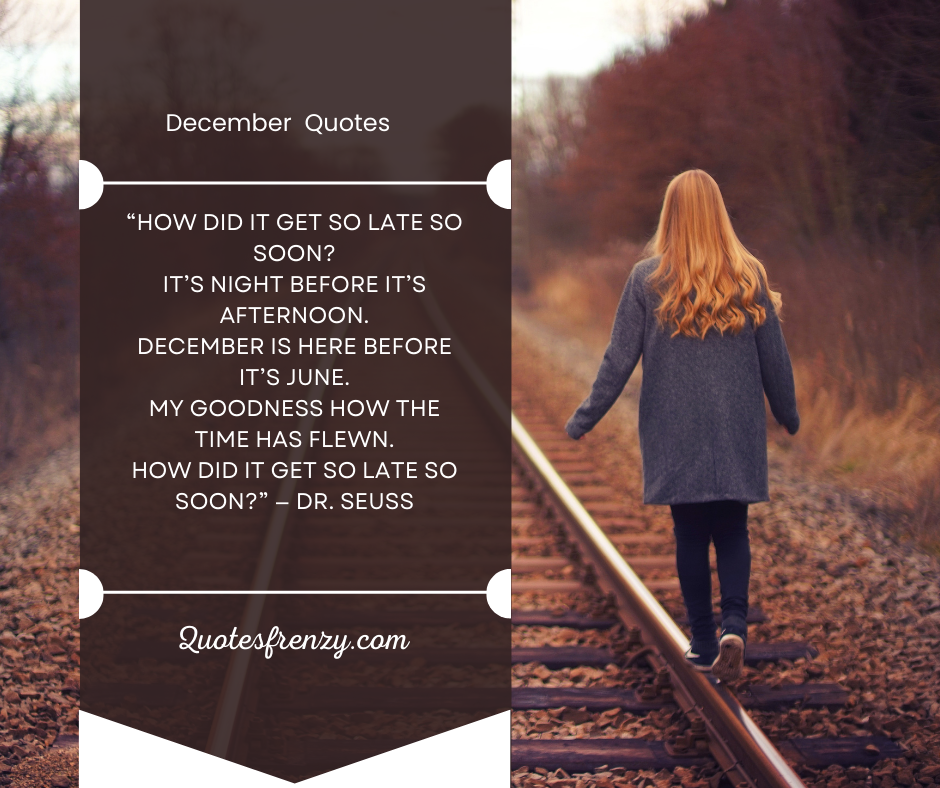 Moon and stars pave the sky in 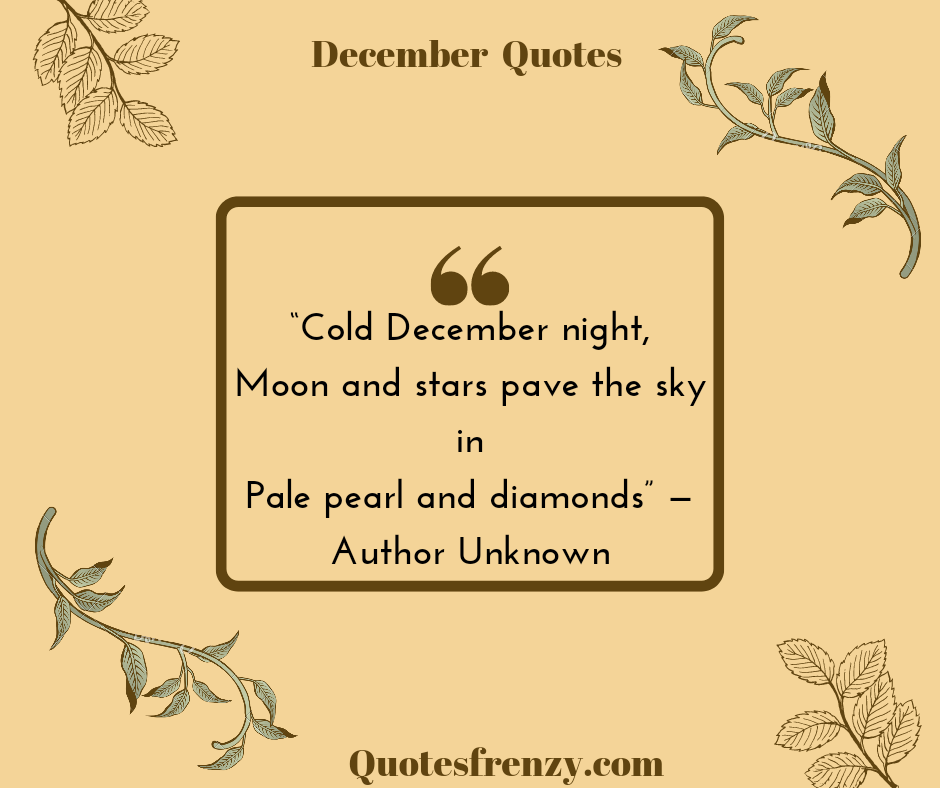 There’s no being or non-being, nor denial itself.”

And blow the dry leaves from the tree!

And take a Life that wearies me.” – Samuel Taylor 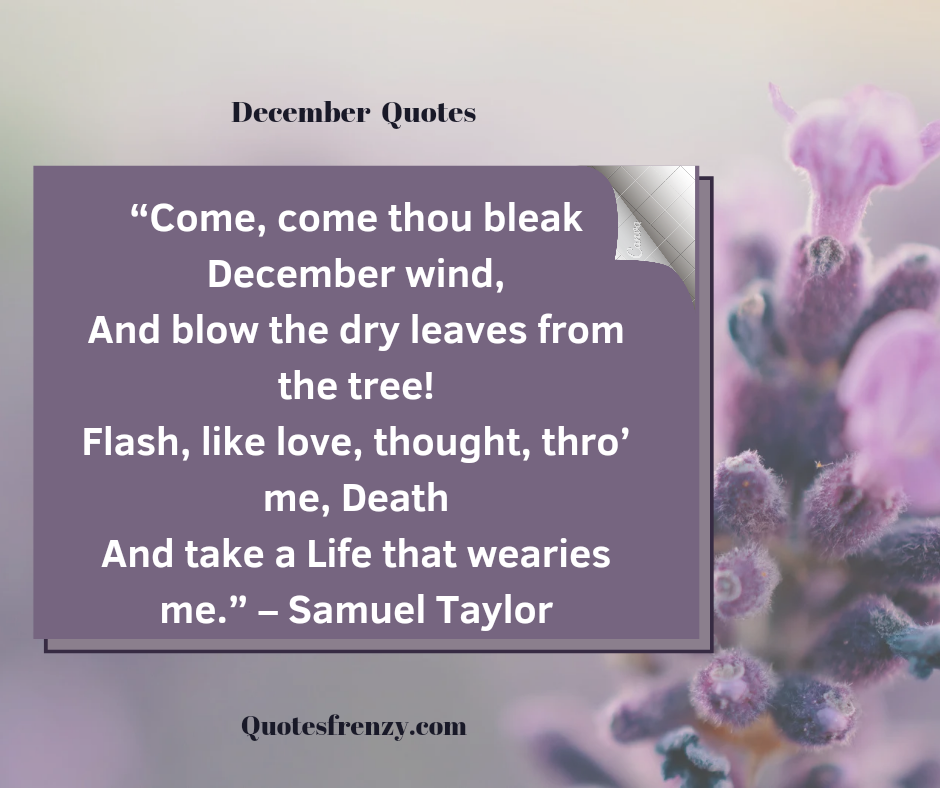 “I sat with chill December

Besides the evening fire.

And what do you remember,

I ventured to inquire,

He answered in amaze,

My age you have mistaken

“Do your heart and head keep pace?

When does hoary love expire,

When do frosts put out the fire?

Can its embers burn below

Blanket of snow filters in,

Softer than a kiss.” — Unknown

“I heard a bird sing

In the dark of December.

And sweet to remember.

‘We are nearer to Spring

Than we were in September,’

I heard a bird sing

In the dark of December.”

“From December to March, there are for many of us three gardens —

the garden of pots and bowls in the house,

and the garden of the mind’s eye.”

— Katherine S. White, from Onward and Upward in the Garden