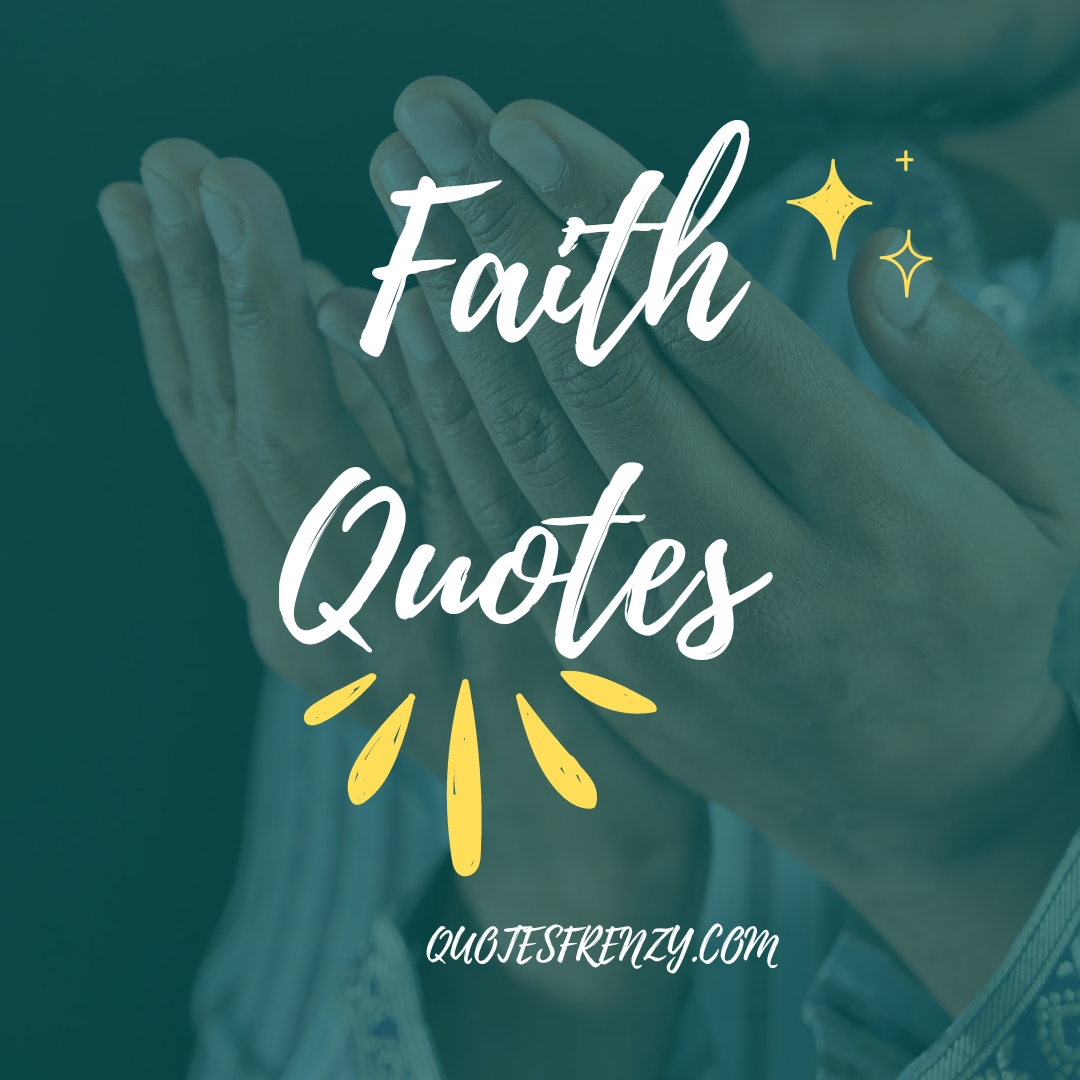 Faith Quotes-You feel down and failing, have faith that you will experience success. Belief in oneself and in others is important in order to stew a favorable outcome. Here are some faith quotes to trigger your belief.

Your strength resides in your faith in small things – Mother Teresa 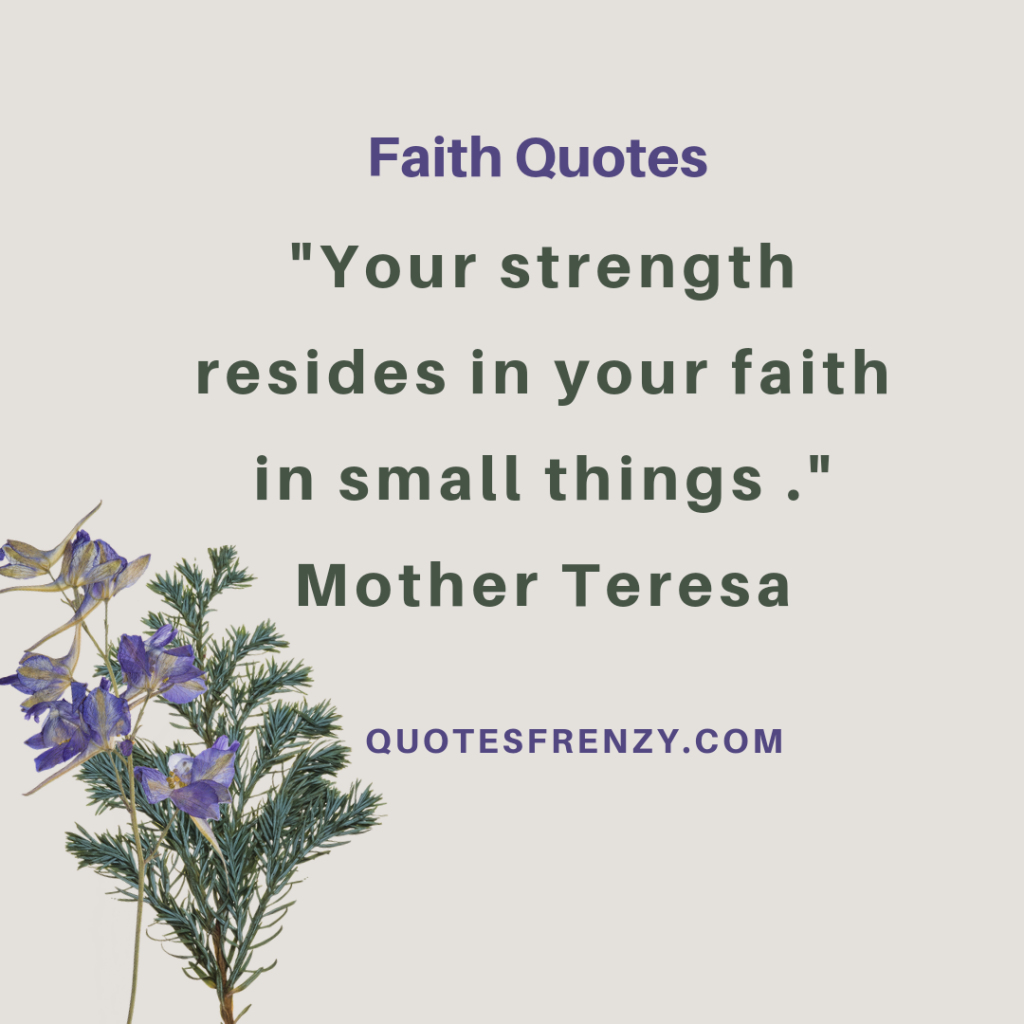 Small things are nothing but a part of the big things.  Together they are essential in life. If you cannot have faith in little stuff, how can you make yourself believe in bigger matters?

Mother Teresa believes that with little action, little aid and little support, the victory in your action provides bigger strength for bigger things.

Have faith even if you do not see the whole staircase. – Martin Luther King, Jr. 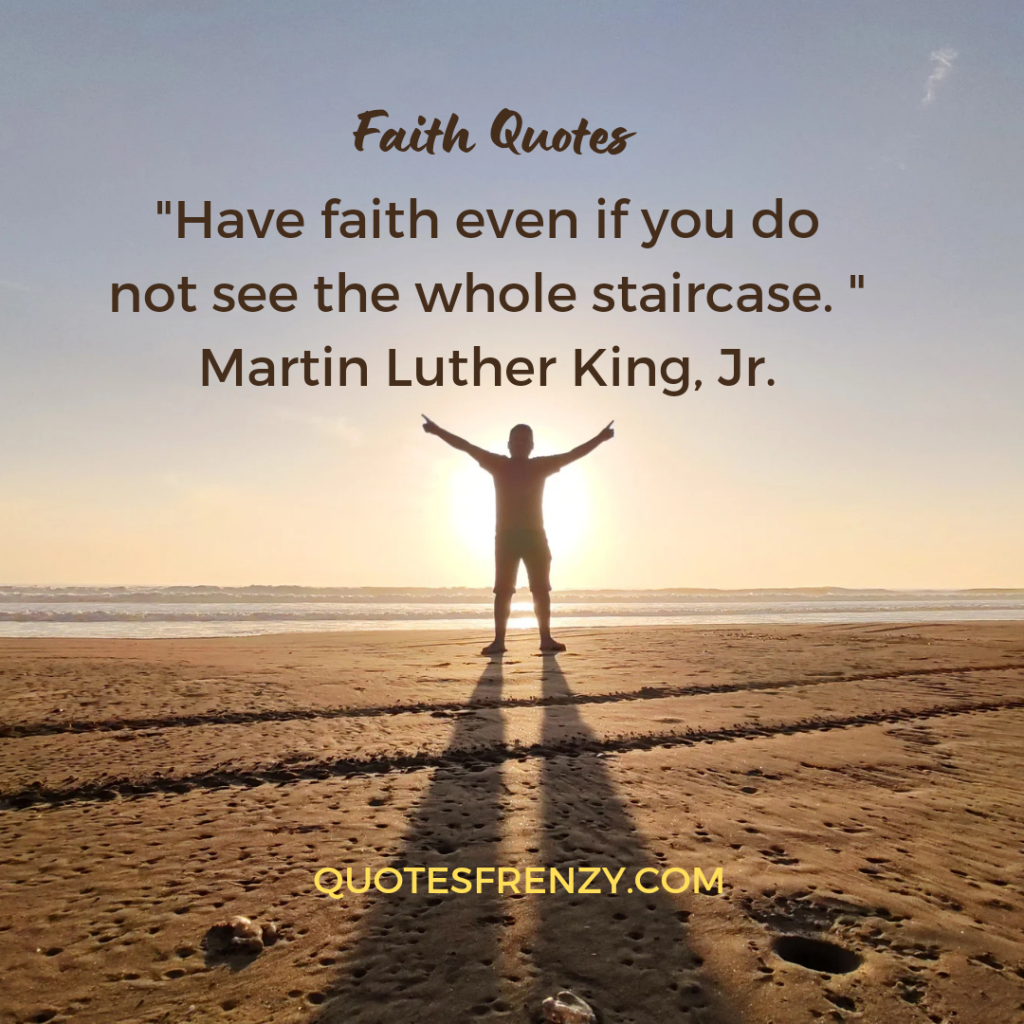 Martin Luther King, Jr. was an epitome of a man of faith.  With his death comes the fulfillment of his purpose.

You must have faith that you will reach your dream. When you climb the stairs, is it not true that you are focused on every step but believed that you can reach the top. When you are driving in the night, do you look for the end of your destination or do you center you watchful eye on the road ahead.  You hope that you will arrive safely.

“Faith is the force of life.” Leo Tolstoy 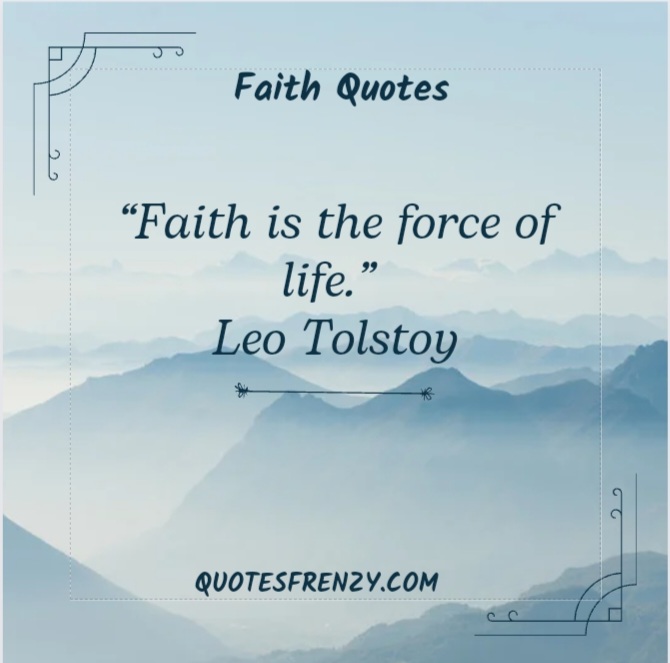 Everything Happens For A Reason Quotes And Sayings

“Have faith in God; God has faith in you.” Edwin Louis Cole

“Faith is a function of the heart….” Mahatma Gandhi

“Faith is a higher faculty than reason.” H. C. Bailey

“Knowledge is only one half. Faith is the other.” Novalis 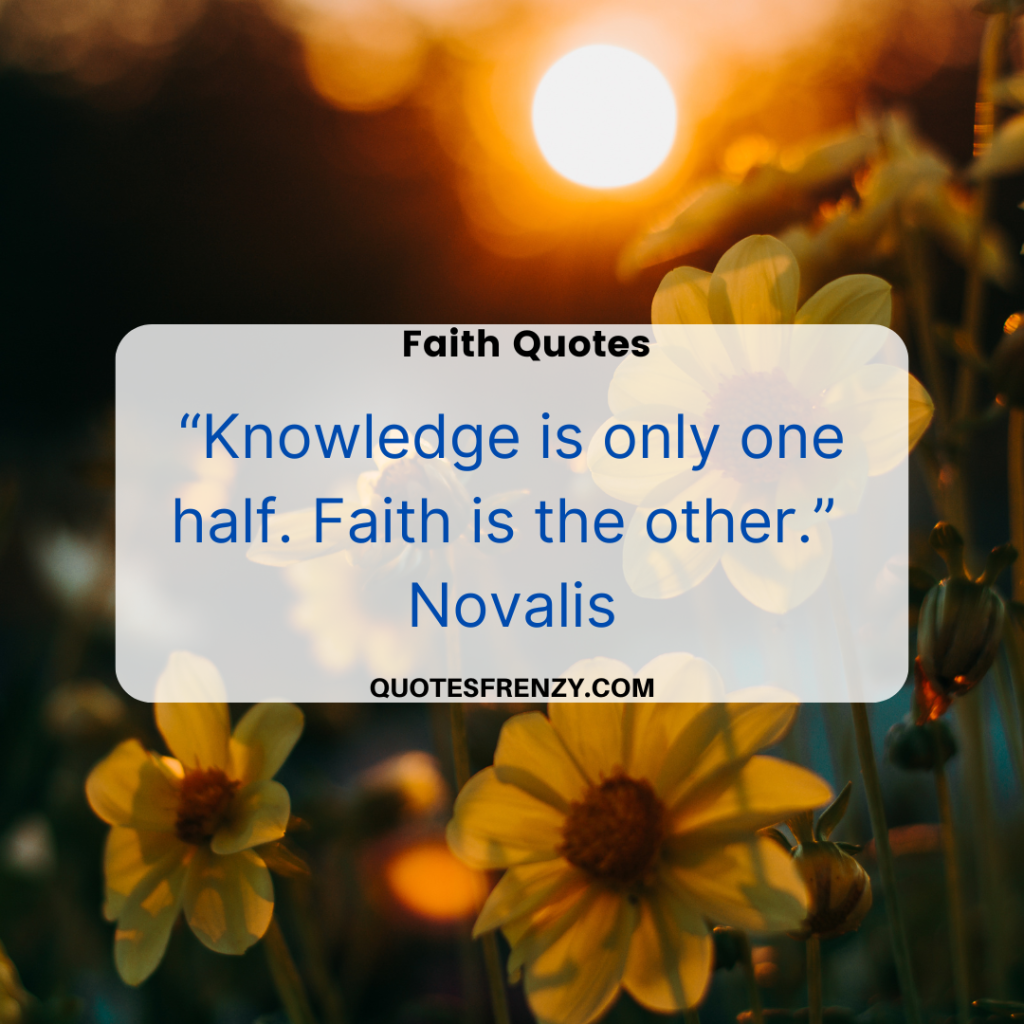 “Faith: not wanting to know what is true.” Friedrich Nietzsche

“A man of courage is also full of faith.” Marcus Tullius Cicero

“Faith is not contrary to reason.” Sherwood Eddy

“Love is an act of faith.” Erich Fromm 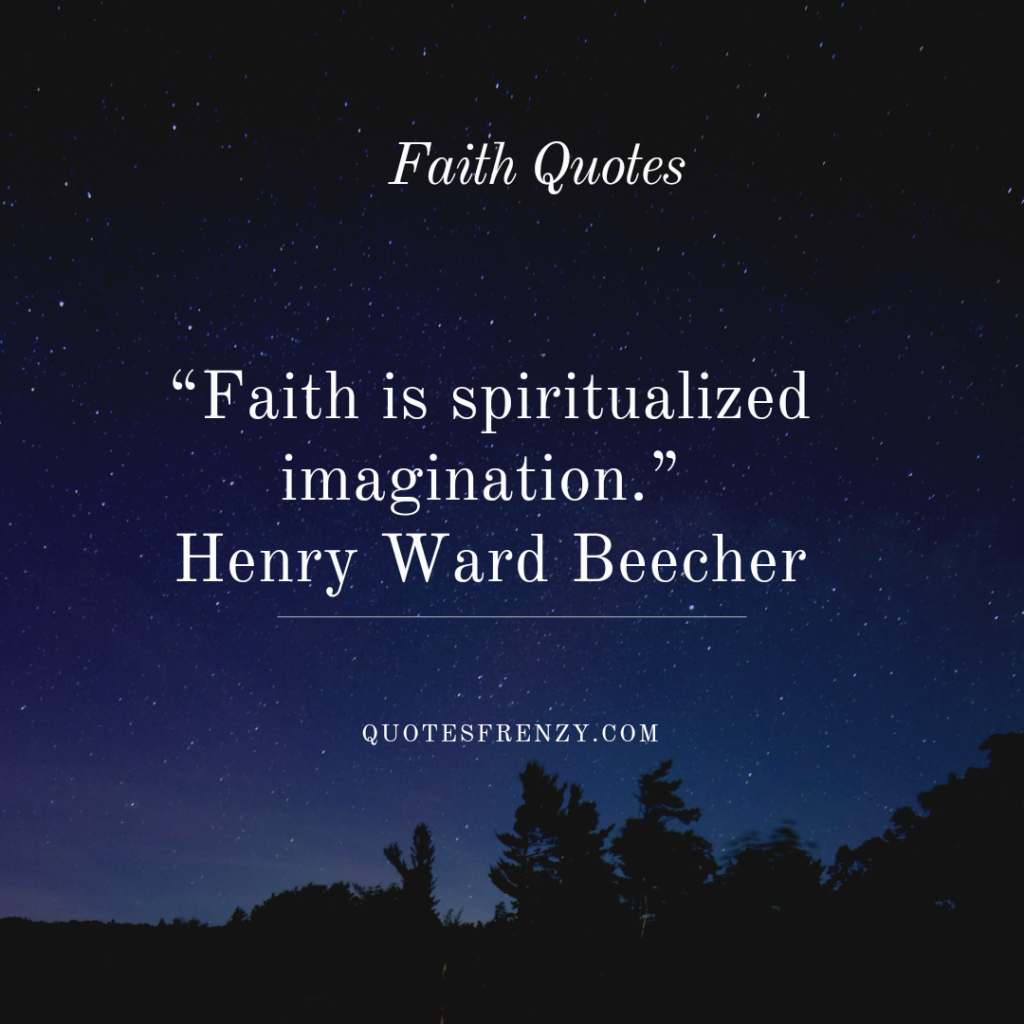 “Keep your faith in God, but keep your powder dry.” Oliver Cromwell 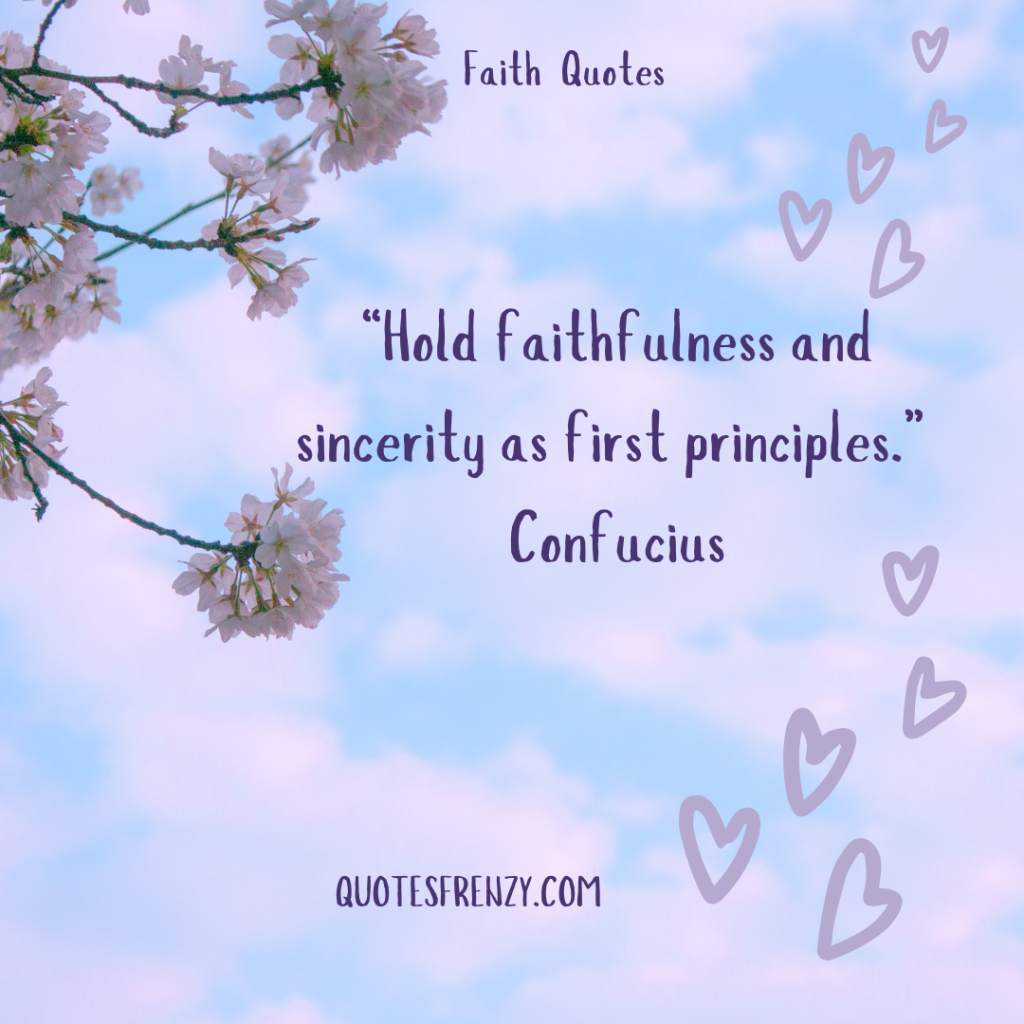 “To me faith means not worrying.” John Dewey

“Our faith comes in moments; our vice is habitual.” Ralph Waldo Emerson

“Faith is the state of being ultimately concerned.” Paul Tillich 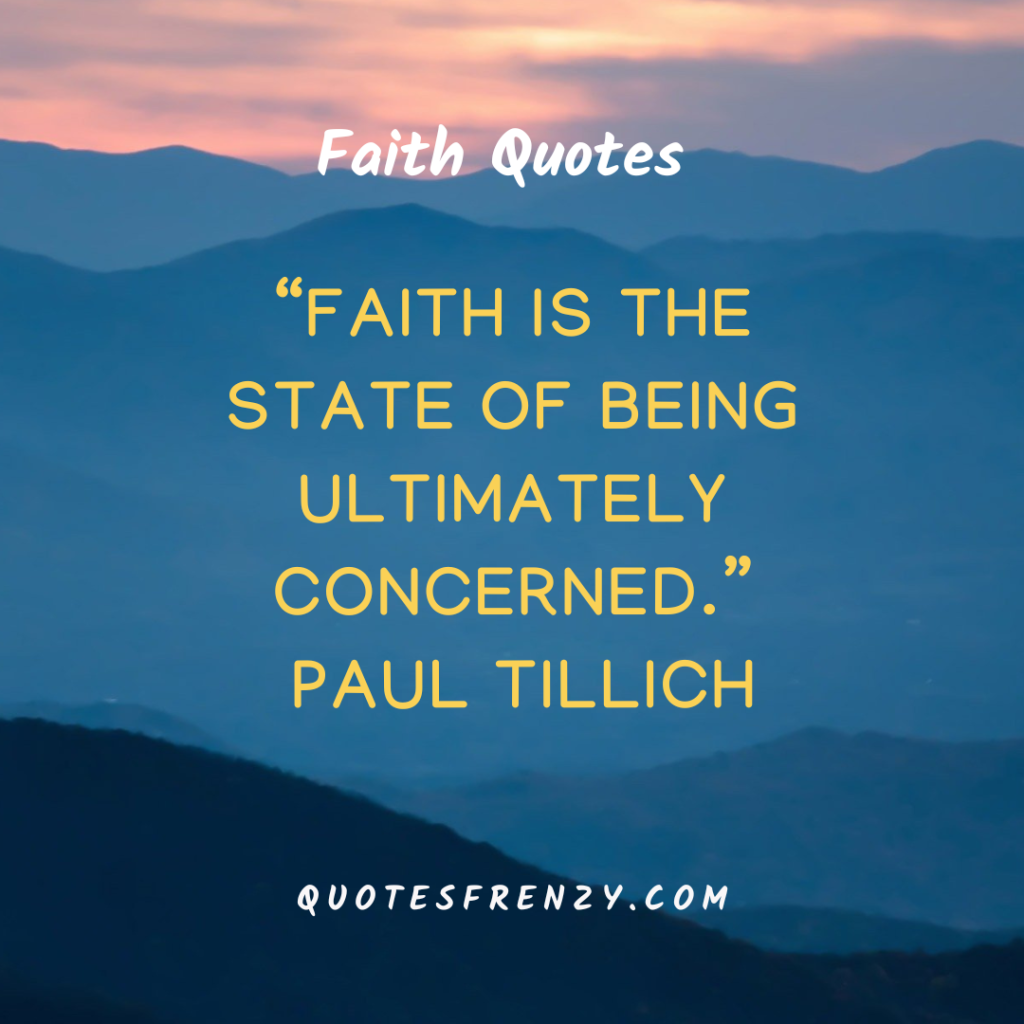 “Reason is the enemy of faith.” Martin Luther

“Our life must answer for our faith.” Thomas F. Wilson

“Non-violence is the article of faith.” Mahatma Gandhi

“Scepticism is the beginning of Faith.” Oscar Wilde

“Faith is like radar that sees through the fog.” Corrie Ten Boom

A bird knows the light will come even when it is dark. – Rabindranath Tagore

Rabindranath Tagore is a Nobel Prize Awardee in Literature.  His poetry and other literary works spread to the West and became famous. He is the enunciation of India’s Hindu culture.

In this faith quote, he compares belief to a bird that lives its own life knowing that tomorrow always come.

In order to see what you believe, you must believe on what you do not see. – Saint Augustine

Augustine of Hippo was a philosopher of Christian theology. He was significant in influencing Western Christianity and Western Thought. His faith has led him to be beatified as a Saint in the Catholic Church. His works has developed prominent followers such as Martin Luther King, Jr.

Have faith in people and not in technology. – Steve Jobs 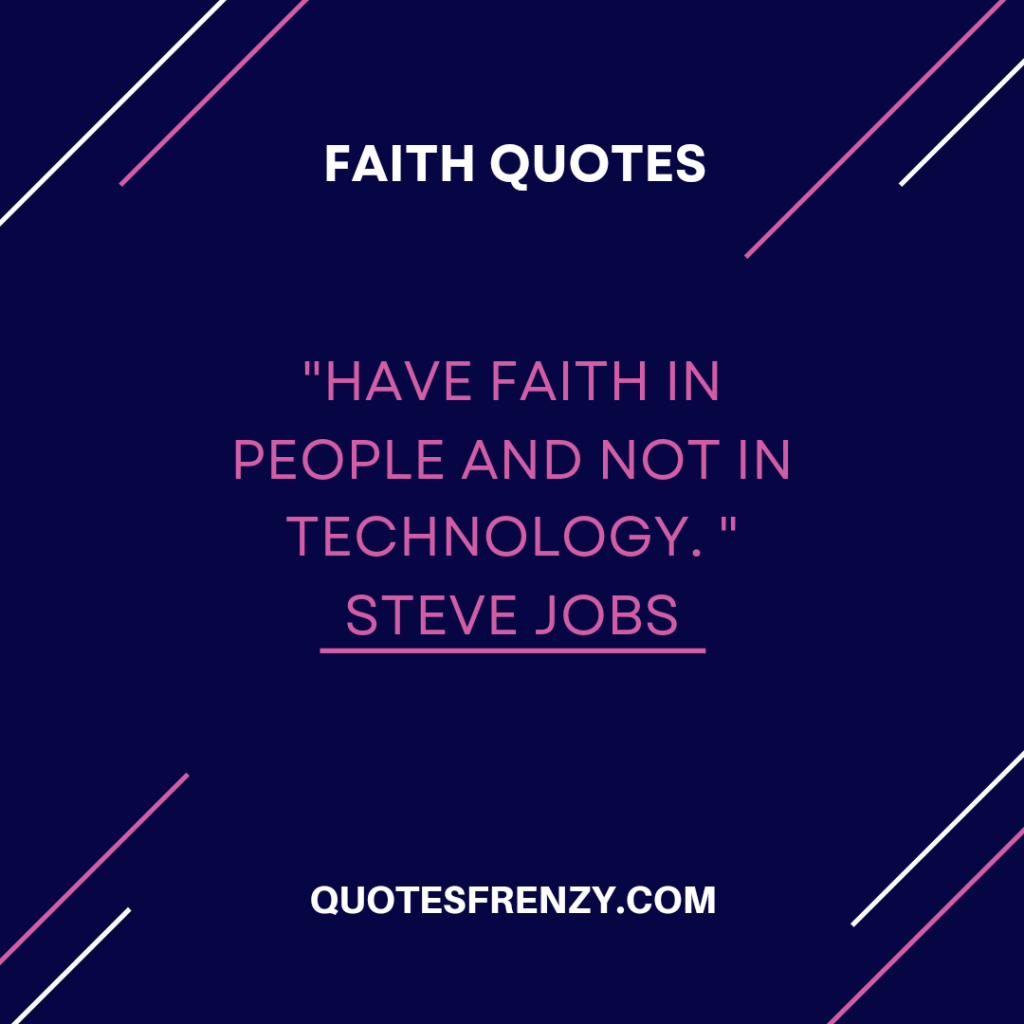 Steve Jobs was a student of Zen Buddhism.  He founded Apple and restored the company’s greatness through his big faith in his people. The people are the greatest asset in a company.  Technology is a product of their imagination, creativity and innovation.

Faith and love comes side by side.  We put our faith in people.  It is only proper to love those people. If you have both, life would be effortless and desirable.

There you have it.  These faith quotes should make you believe more and love more.