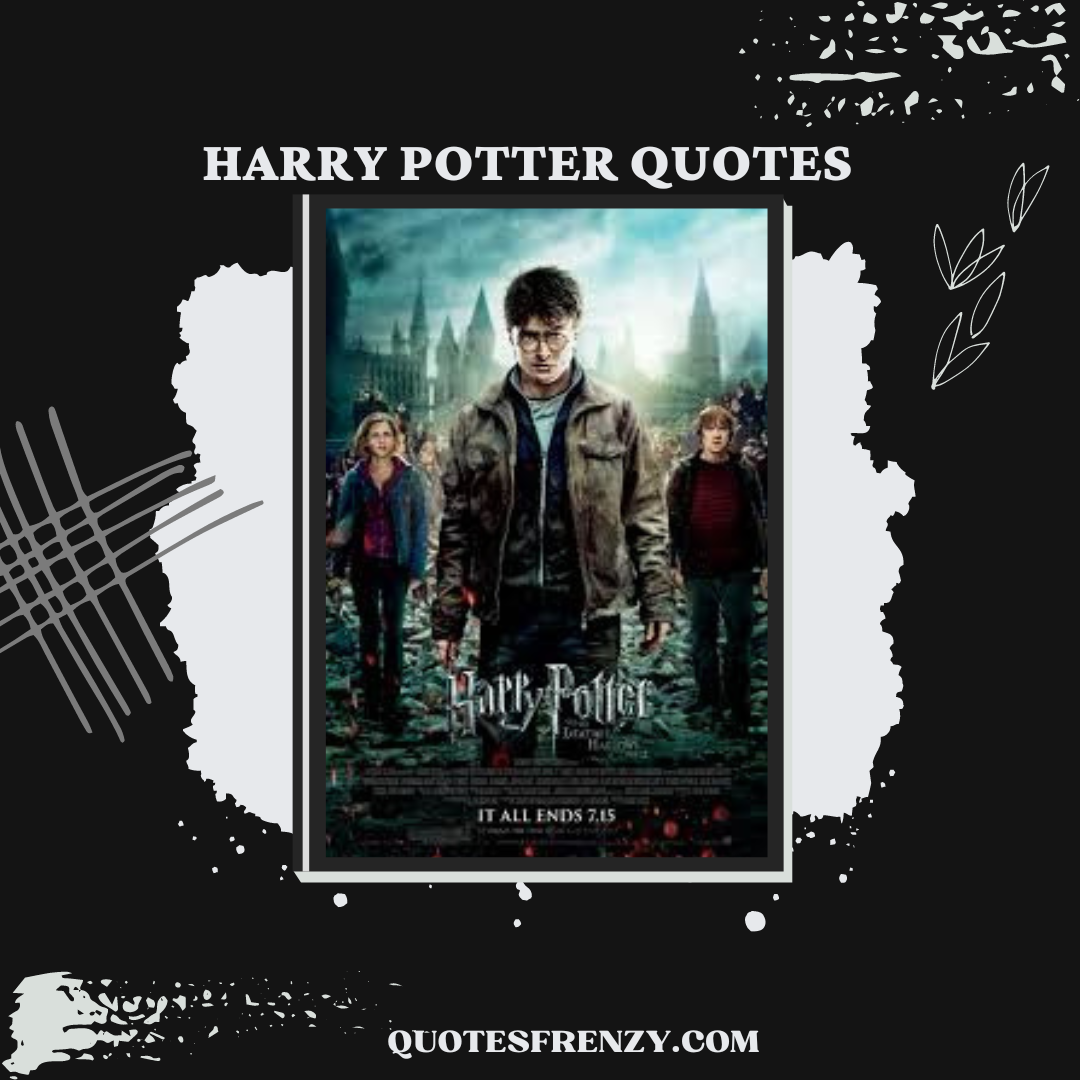 I am a big defender of ‘Harry Potter’, and I think any book that gets kids to read are books that we should cherish, we should be thankful for them – Judy Blume 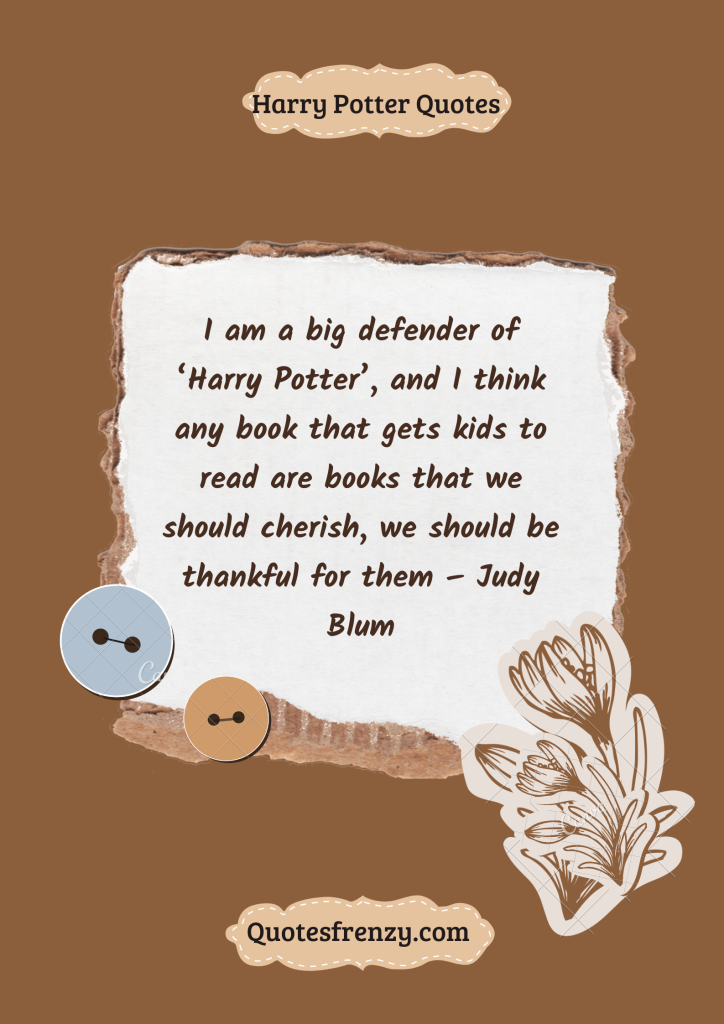 The culture of reading books is being challenged by playing of computer games. Harry Potter is the only Movie that encouraged kids to look for Harry Potter books on the shelf. The characters were young, playful and intriguing. Their acts are easy to relate with the imagination of children. This quote describes one of the main reasons for the economic success of Harry Potter. The quote also appreciates the fact that Harry Potter actually got kids to read books more than ever.

“Harry Potter changed my life in more ways than one, and it helped me get through my mothers death.” Aimee Carter 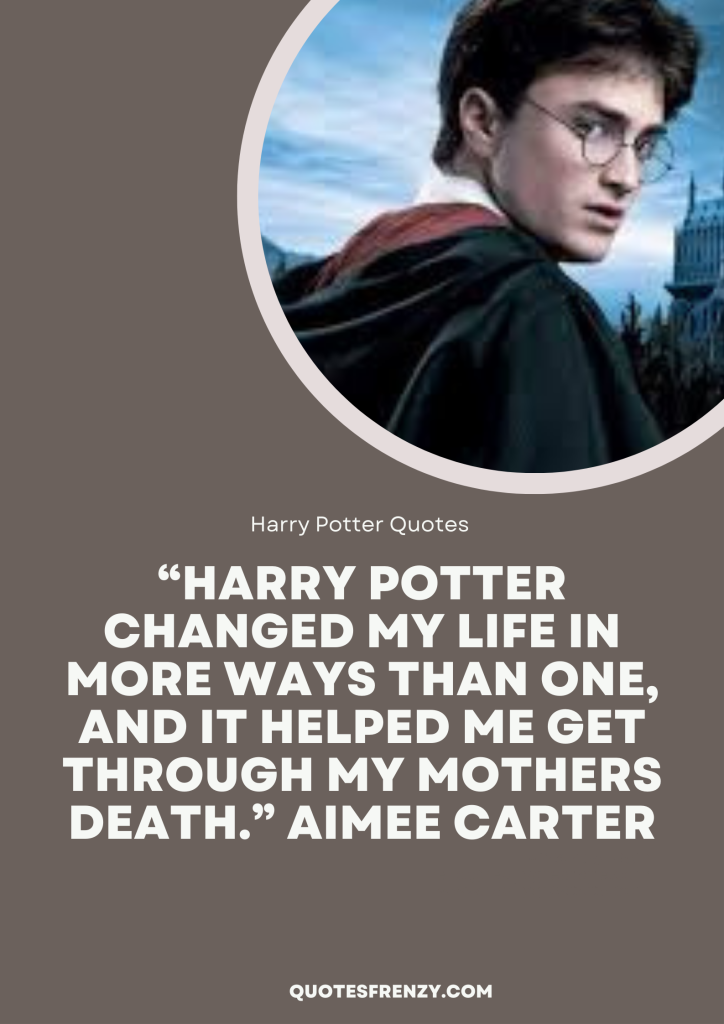 “Harry Potter has been a fantastic experience and the fact it has made stars of us all is unbelievable at times – it really is magic of a sort.” Rupert Grint

“For Harry Potter I have all the time in the world.” Philippa Gregory 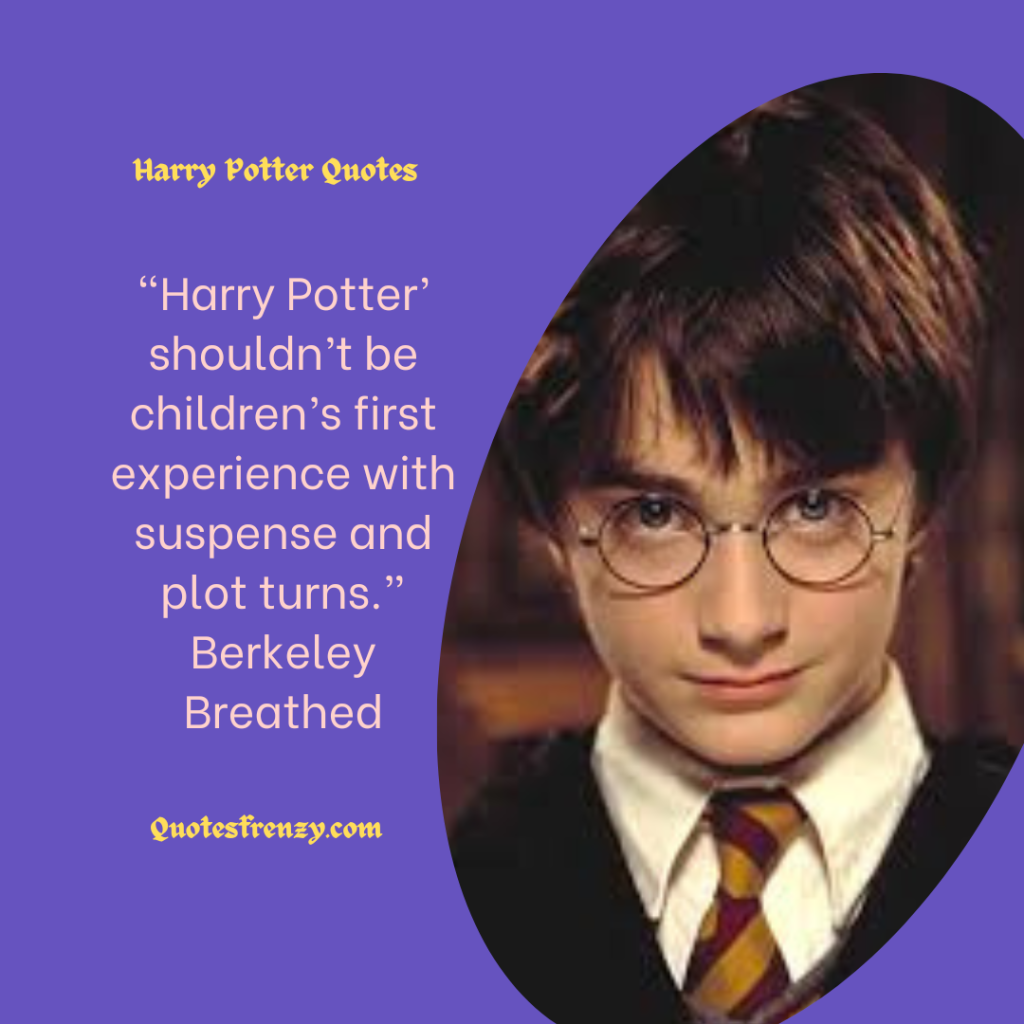 “Harry Potter’s like Santa Clause: something you can’t see but wish was real so badly that you end up believing in it.” Emma Watson

“Like one time I was a fish in Noah’s Ark and now I’m in Harry Potter, a big step.” Rupert Grint

“It seems no matter what I read I think “this is not harry potter”.” Hank Green

“Maybe by his second year in Hogwarts, Harry Potter will learn the trick to making a movie this good but don’t bet on it. It’s one of the best films of the year.” Joel Siegel

“‘Harry Potter’ gave me back self respect. Harry gave me a job to do that I loved more than anything else.” J. K. Rowling 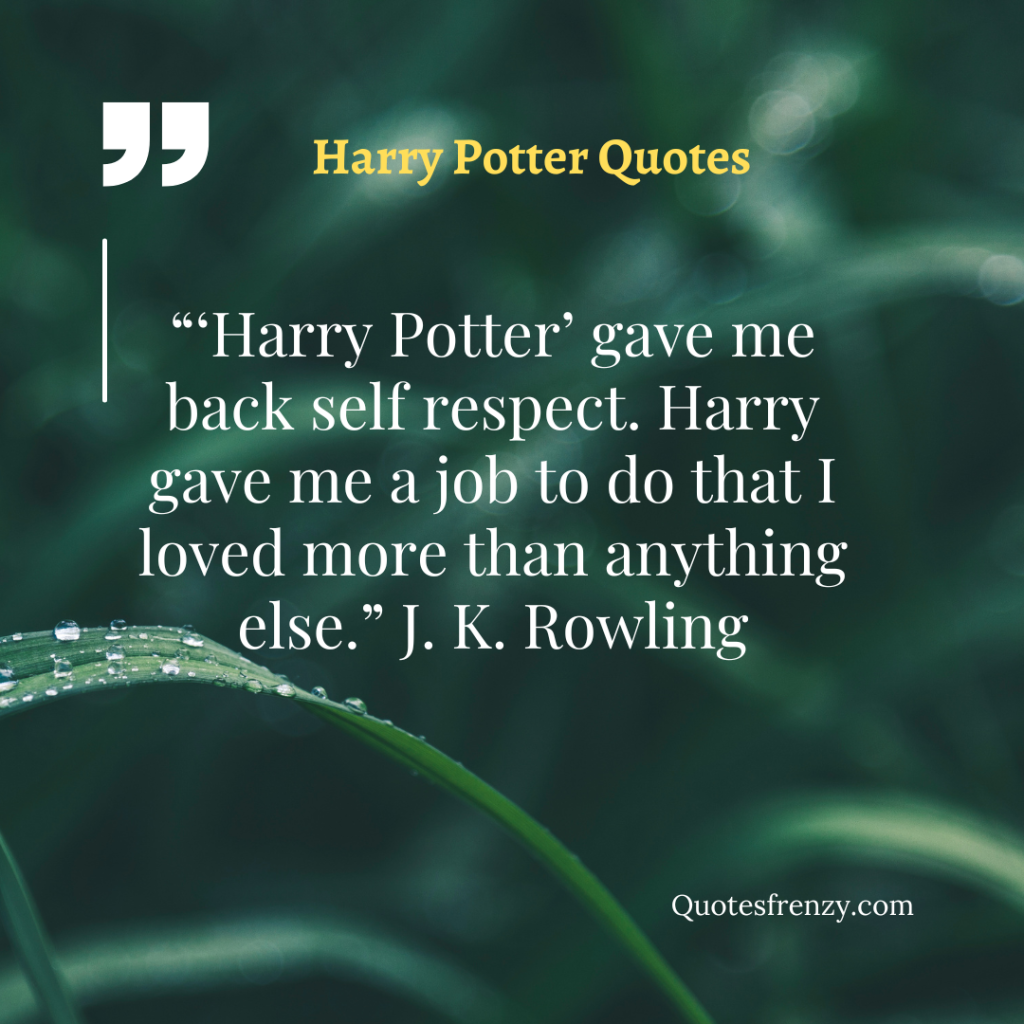 “Harry Potter has kindly joined us for my rebirthing party. One might go so far as to call him my guest of honor.” J. K. Rowling

“The scar had not pained Harry for nineteen years. All was well.” J. K. Rowling

“… perhaps those who are best suited to power are those who have never sought it.” J. K. Rowling

“Ron: Why spiders? Why couldn’t it be “follow the butterflies?” J. K. Rowling

“It is my belief… that the truth is generally preferable to lies.” J. K. Rowling

“According to Madam Pomfrey, thoughts could leave deeper scars than almost anything else.” J. K. Rowling

“What are Fred and I? Next door neighbors?” J. K. Rowling

“Can I have a look at Uranus too, Lavender?” J. K. Rowling

“The fact that you can feel pain like this is your greatest strength” J. K. Rowling 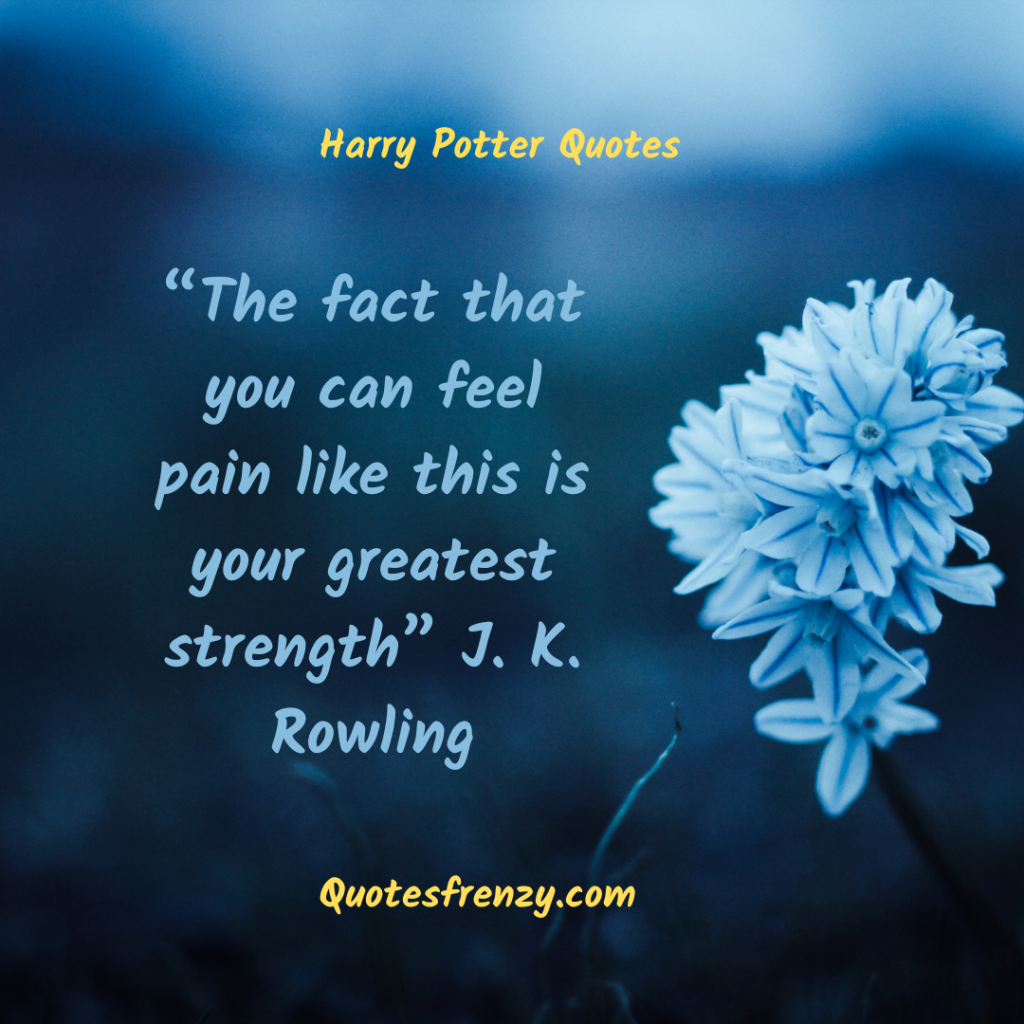 “Age is foolish and forgetful when it underestimates youth.” J. K. Rowling

I never talk about ‘Harry Potter’ because I think that would rob children of something that’s private to them. I think too many things get explained, so I hate talking about it – Alan Rickman

The popularity of Harry Potter, among children is unbelievable. When the movie was launched, it spread like wildfire among teenagers and kids around that age. Some parents also attest to following the movie keenly. It is one movie you will never be able to ignore. Most parents also became part due to the demanding nature of their kids to purchase for them the harry potter materials. The above quote indicates that Harry Potter is a talk in everyone’s lip.

I could be 100 years old and in my rocker, but I’ll still be very proud that I was part of the ‘Harry Potter’ films – Emma Watson 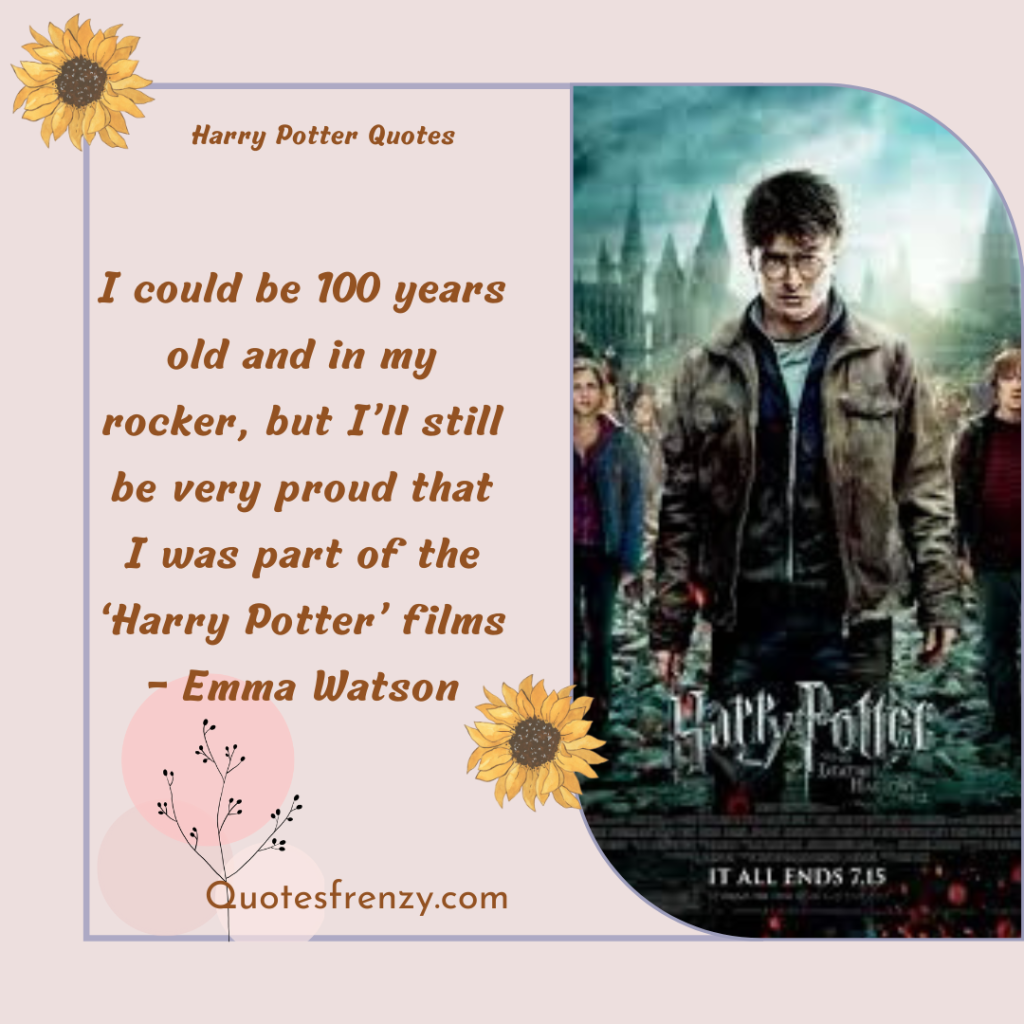 Emma Watson is one of the stars in the Harry Potter film. As an actor being involved in such a successful movie brought her a lot of satisfaction. Apart from earning good money, she would not compare it with the satisfaction that came with inspiring young kids.

To have a successful film, you do not only need to make financial sense out of it. You also need to impact lives in a positive way. The Harry Potter Quotes shows you how.