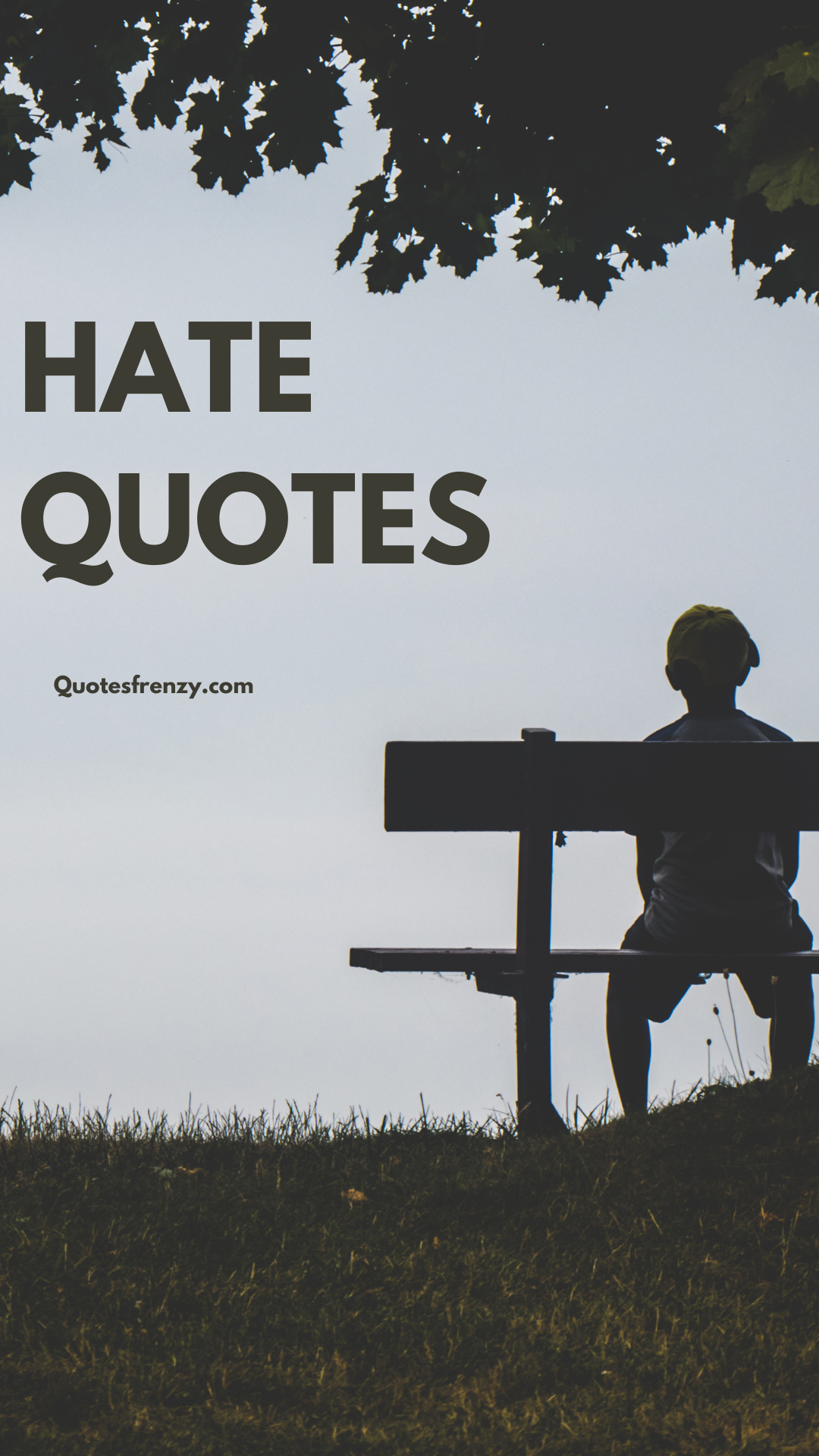 55 hate Quotes. Hate has a way of bringing out the worst in people. Whether used as a means to cover up feelings of fear or pain, hatred can quickly become all-consuming. If hate can be taught, so can love. Take a more constructive approach with the list of wise and insightful quotes on hate below. 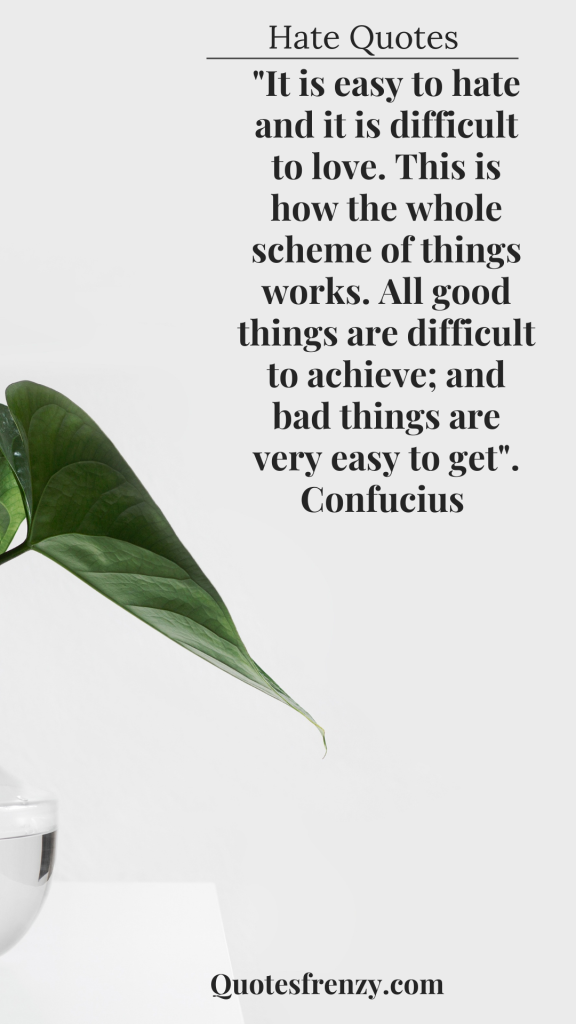 “From the deepest desires often come the deadliest hate. ” Socrates

“Hating people is like burning down your own house to get rid of a rat”.  Henry Emerson Fosdick

“Dislike what deserves it, but never hate: for that is of the nature of malice; which is almost ever to persons, not things, and is one of the blackest qualities sin begets in the soul.” Willliam Penn

“Hate always sells well, but for repeat trade and the long pull happiness is sounder merchandise”.  Robert A. Heinlein

“Those who hate most fervently must have once loved deeply; those who want to deny the world must have once embraced what they now set on fire”.  Kurt Tucholsky

“Hate is always a clash between our spirit and someone else’s body”. Cesar Pavese

“Hate is a lack of imagination”. Graham Greene 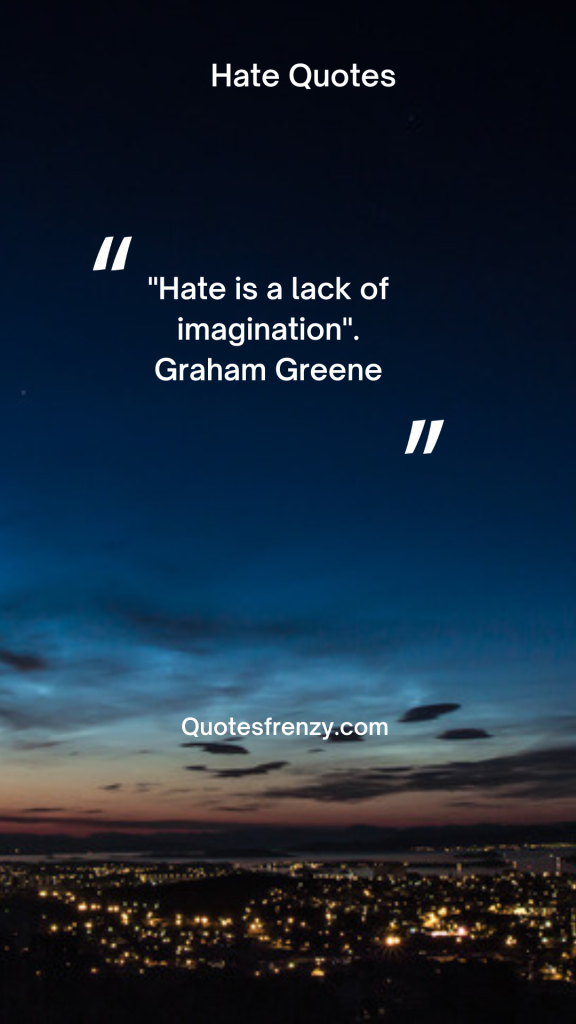 “Hatreds are the cinders of affection”. Sir Walter Ralegh

“Hate is not a good counselor.” Victoria Wolff

“Hatred is the atmosphere of hell.” Martin Farquhar Tupper

“Now hatred is by far the longest pleasure; Men love in haste, but they detest at leisure. “Lord Byron

“When we don’t know who to hate, we hate ourselves”. Chuck Palahniuk

“You lose a lot of time, hating people.” Marian Anderson

“It is not violence that best overcomes hate — nor vengeance that most certainly heals injury”. Charlotte Bronte

“If you have been hated, you have also been loved”. Henry James 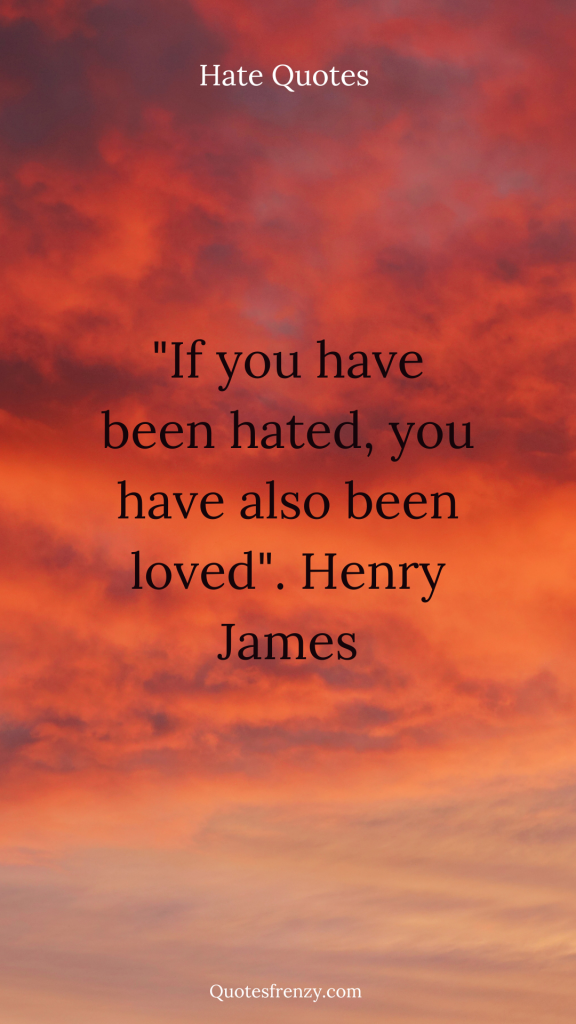 “Love those that hate you, but to love those one hates is impossible”. Leo Tolstoy

“Throughout life people will make you mad, disrespect you and treat you bad. Let God deal with the things they do, cause hate in your heart will consume you too”. Will Smith

“Success makes so many people hate you. I wish it wasn’t that way. It would be wonderful to enjoy success without seeing envy in the eyes of those around you”. Marilyn Monroe

“Hate must make a man productive. Otherwise one might as well love.” Karl Kraus

“All men kill the thing they hate, too, unless, of course, it kills them first”. James Thurber

“Hate cages all the good things about you”. Terri Guillemets

“The price of hating other human beings is loving oneself less”. Eldridge Cleaver

“Hate is like water in a dry gulch. The longer it runs, the deeper it digs”. Ken Alstad

“Hate destroys the very structure of the personality of the hater…. when you start hating anybody, it destroys the very center of your creative response to life and the universe; so love everybody”. Martin Luther King

“We hate some persons because we do not know them; and will not know them because
we hate them”. Charles Caleb Colton

“If you hate a person, you hate something in him that is part of yourself. What isn’t part of ourselves doesn’t disturb us”. Hermann Hesse 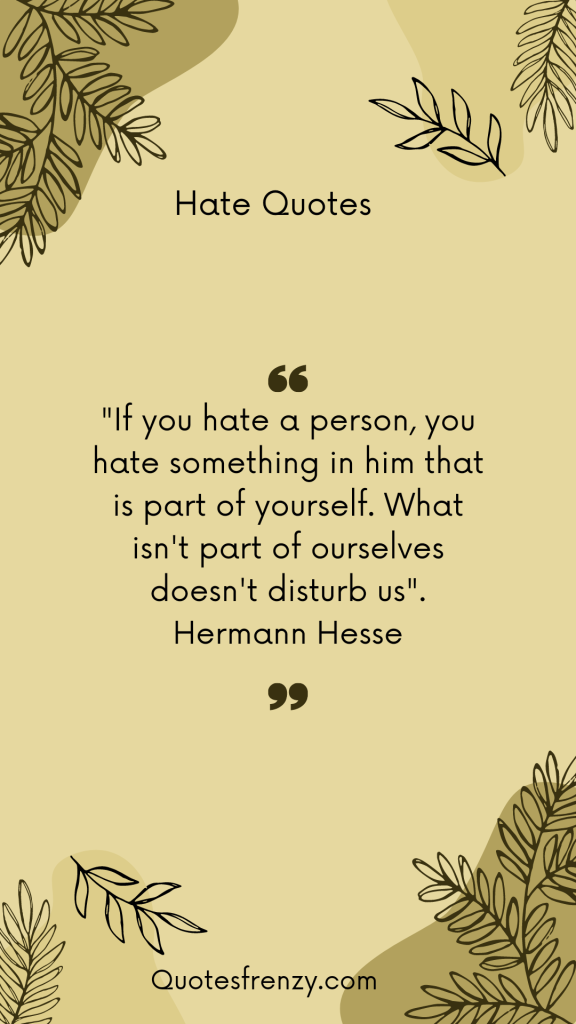 “I imagine one of the reasons people cling to their hates so stubbornly is because they sense, once hate is gone, they will be forced to deal with pain”. James Baldwin

“I think that hate is a thing, a feeling, that can only exist where there is no understanding.” Tennessee Williams

“I have decided to stick with love. Hate is too great a burden to bear. “Martin Luther King

“No one is born hating another person because of the colour of his skin, or his background, or his religion. People must learn to hate, and if they can learn to hate, they can be taught to love, for love comes more naturally to the human heart than its opposite”. Nelson Mandela

“That feelings of love and hate make rational judgments impossible in public affairs, as in private affairs, we can clearly enough see in others, though not so clearly in ourselves”. Herbert Spencer

“Hate is like a swordfish, working through water invisibly and then you see it coming with blood along its blade, but transparency disarms it”. Pablo Neruda

“Life appears to me too short to be spent in nursing animosity or registering wrongs”. Charlotte Bronte

“Hatred is a cold fire, and it gives no warmth”. Laurell K. Hamilton

“Blunted unto goodness is the heart which anger never stirreth, but that which hatred swelleth, is keen to carve out evil”. Martin Farquhar Tupper

“The worst enemy is one whose doctrines are founded in hate and are thus beyond debate”. Tobsha Learner 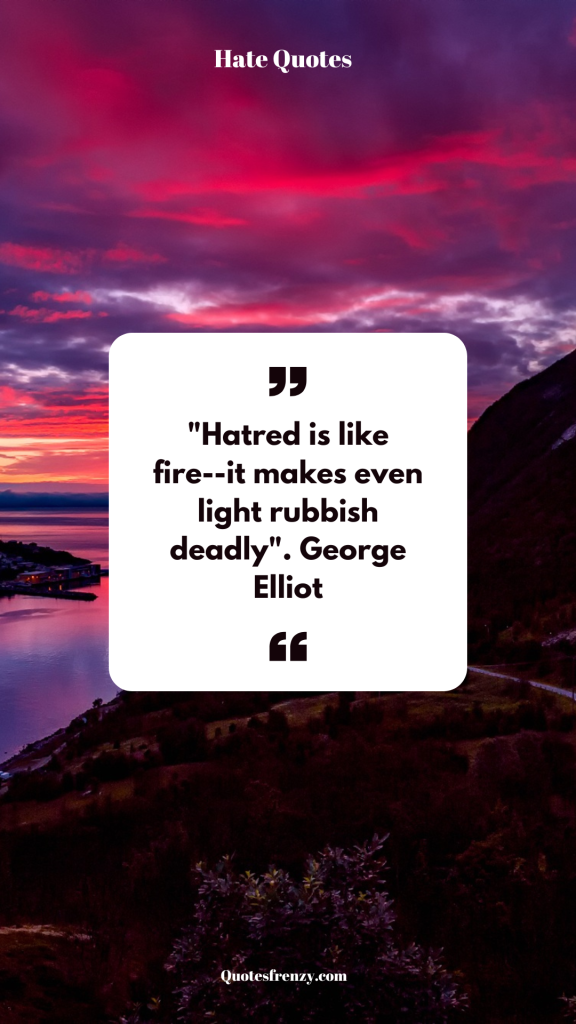 “It is easier to hate those we love, than love those whom we have hated”.  Norman MacDonald Maxims

“Hate is the consequence of fear; we fear something before we hate; a child who fears noises becomes the man who hates them”. Cyril Connolly

“We have just enough religion to make us hate, but not enough to make us love one another”. Jonathan Swift

“You never really hate anyone as much as someone you cared about once”. Cassandra Clare

“Hate is a bottomless cup; I will pour and pour”. Euripedes 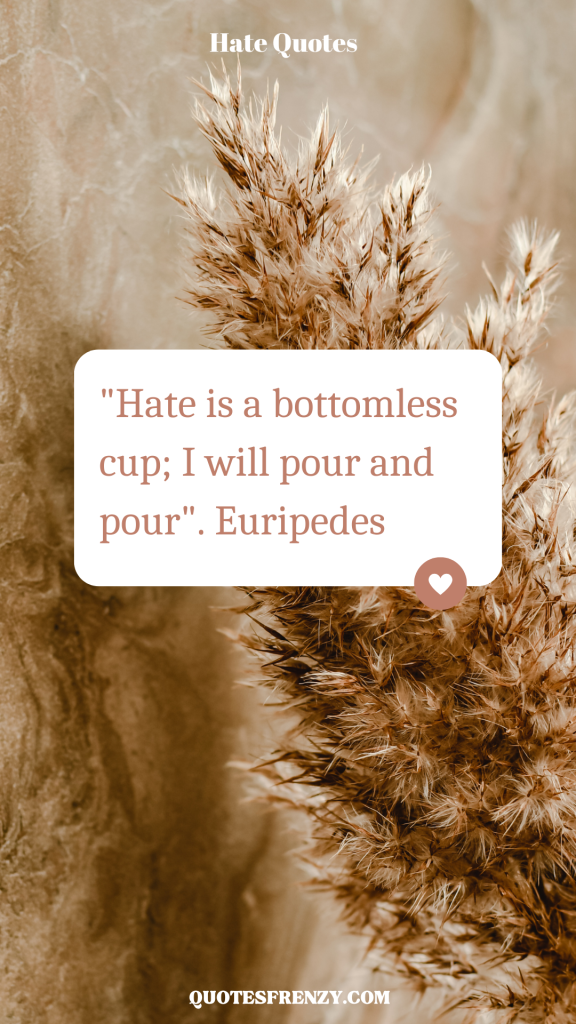 “Others may hate you. But those who hate you don’t win, unless you hate them. And then, you destroy yourself”. Richard Nixon