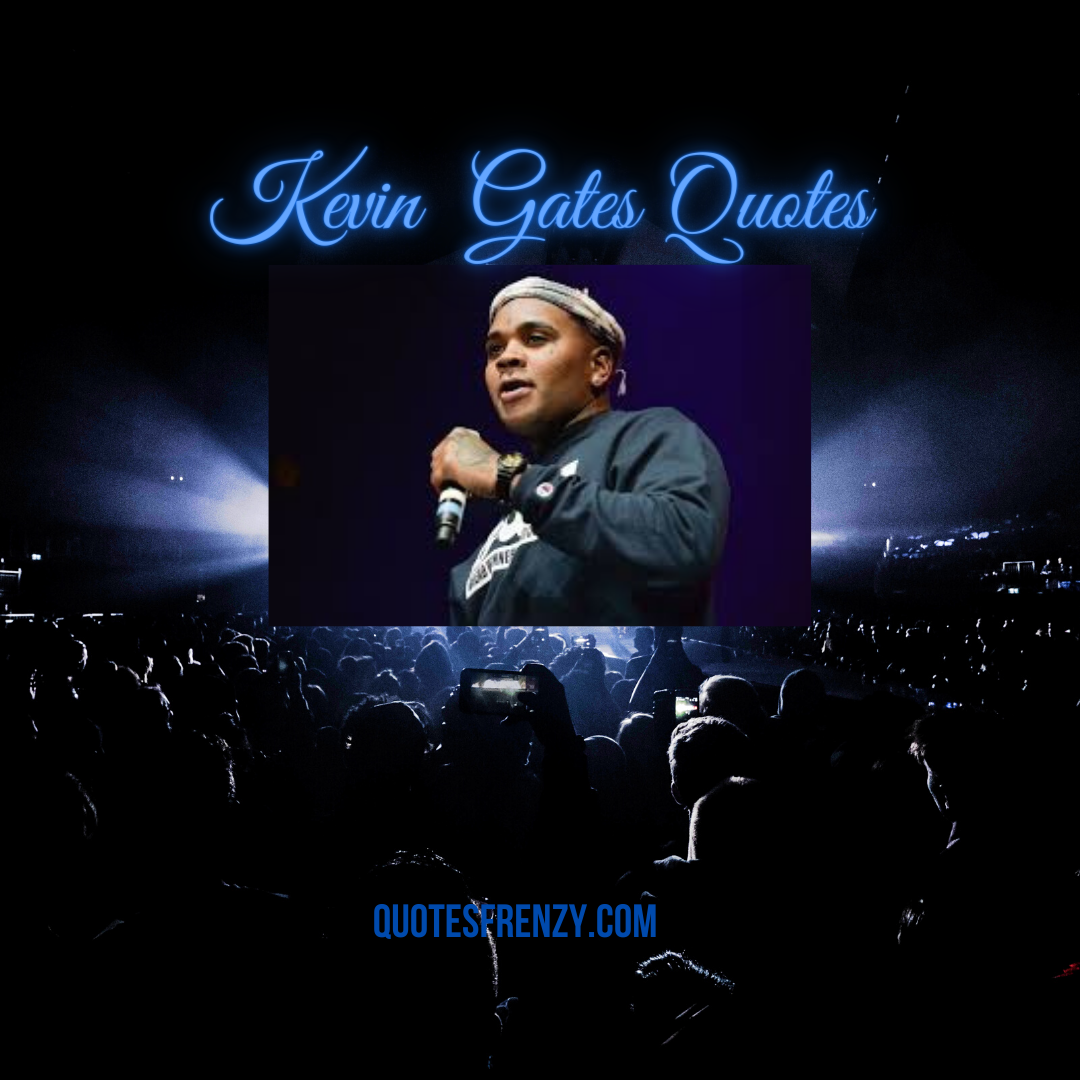 Kevin Gates Quotes-Life is filled with its ups and downs.  For many it seems to present more of the latter.  There are times when we often need a boost.  This could be simply some verbal inspiration or it may be physical in the form of some doctor prescribed drug.  At times our thoughts are bombarded with negativity.  This can lead to stress, which then leads to physical or psychological issues.  It is amazing how sometimes those words shared by a friend or family member can motivate you.  Persons who you do not know can also provide tremendous inspiration.  Many singers often do this through their songs.  Then they may share quotes that can take you out of a depressing state.  Since many individuals often live by the words of the popular consider these positive quotes by Kevin Gates. 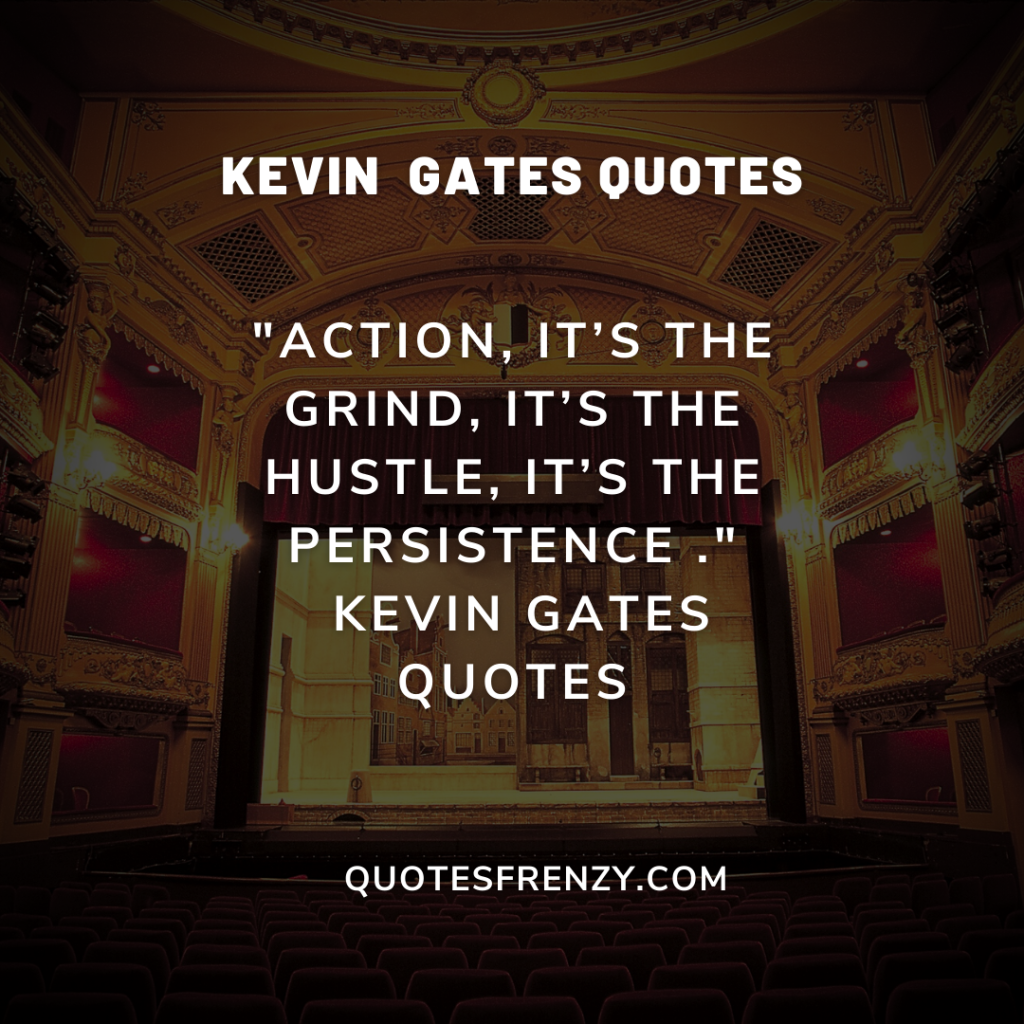 This quote is great for those who need that motivation to make things happen for themselves.  Mr. Gates focuses on the fact that the only critical factor which may prevent you from achieving is time.  Anything positive that you once had can be regained.  Additionally, your hopes, dreams, goals or aspirations require action.  You must make that step. You must go hard consistently regardless of how difficult things may seem.

“Anything lost, can be found again, except for time wasted.” 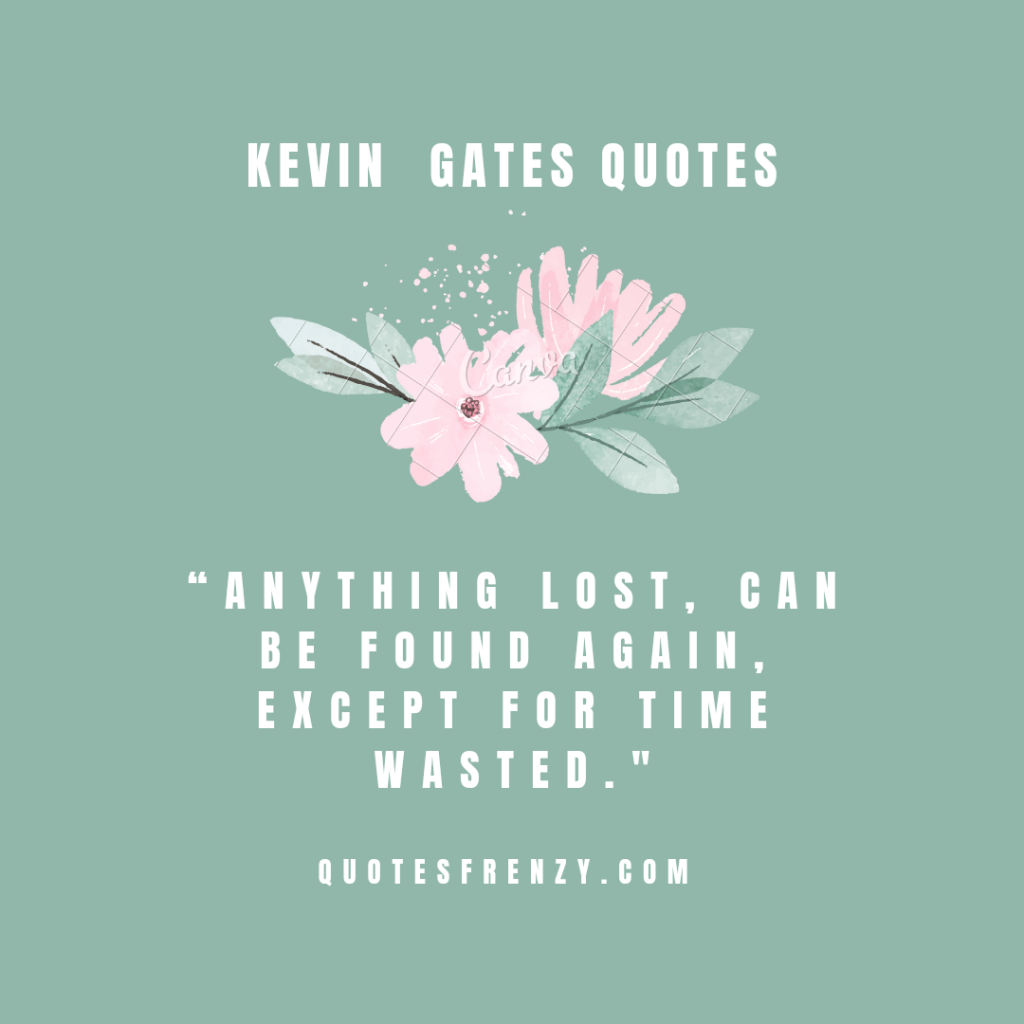 “A vision without action is merely a dream
Action, it’s the grind, it’s the hustle, it’s the persistence” Kevin Gates
Emotionally I’m an introvert but it come off as aggression.” Kevin Gates

“Everybody round you pretendin that they your partner, let you have a problem they won’t even help you out.” Kevin Gates

“I don’t have a religion. I ain’t nothing wrong with church as long as they selling chicken. Cause I read the Quran, I read the Kabalah, I read the Bible. They all got the same three basic principles: Love God, love your neighbor as yourself, and…As far as me being, I live by those principles.” Kevin Gates

“I have trust issues with allowing other individuals to know my innermost secrets for fear of how I may be viewed. Everyone has this.” Kevin Gates

“If you associate yourself with peer pressure or complacency, you’re destined for failure.” Kevin Gates 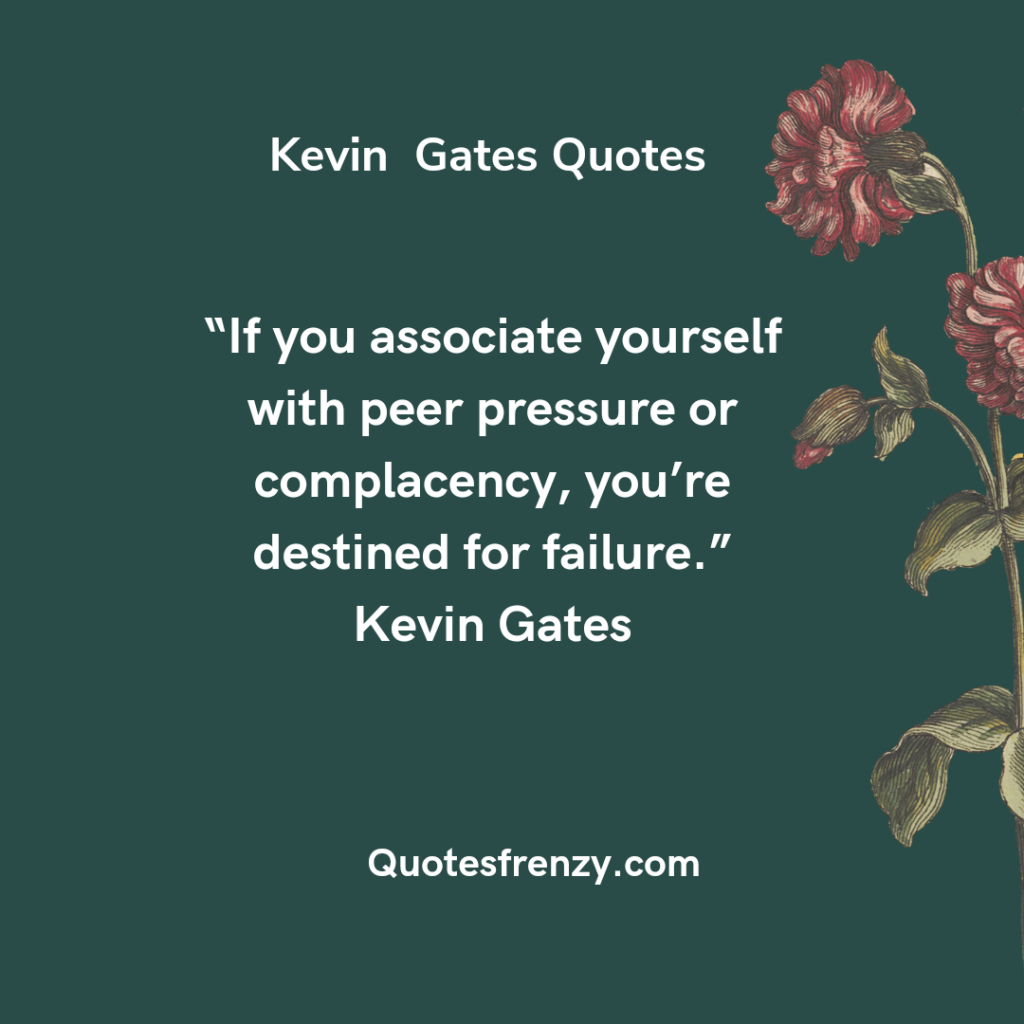 “I’m inspired by everything that goes on around me. I’m a sponge. I’m very analytical. I notice the things that most ” Kevin Gates

“It is illegal to steal my feelings and leave” Kevin Gates

“I’ve always stood on my own two. I don’t need a team. I don’t do the entourage thing, 30 people. I don’t do that. That’s just not me.” Kevin Gates

“I’ve had good times and I’ve had bad times and I reminisce, maybe when I lay down, but throughout my day I keep myself engulfed in whatever moment I’m in because it could steer me into a depressed state.” Kevin Gates

“Jail and the streets go hand in hand. You can’t have one with out the other. They coincide.” Kevin Gates 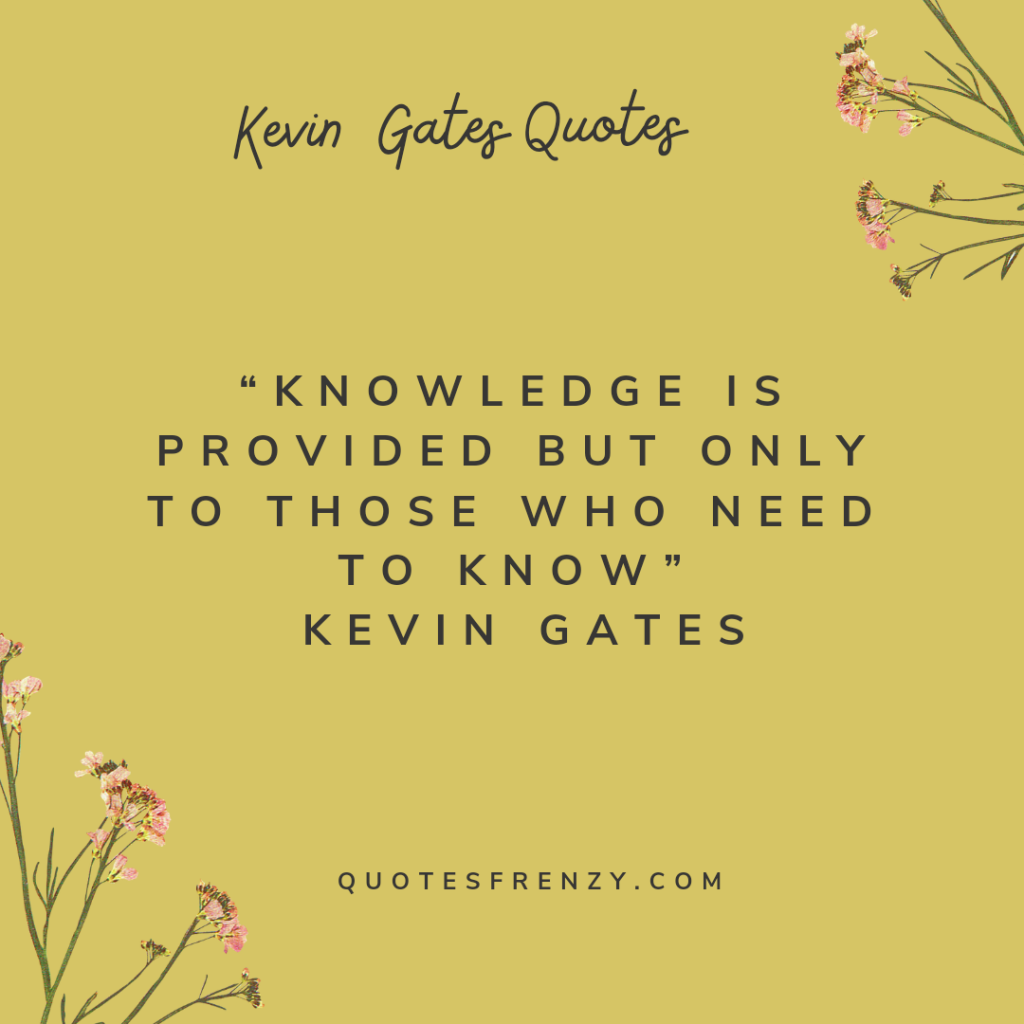 “Loves a battlefield it’s not a one night stand.” Kevin Gates

“My daily conversation, it consists of hustle. Grinding from the bottom sick and tired of struggle.” Kevin Gates

“Never break or fold, that’s what it takes to be major.” Kevin Gates

“Out my window.. I see everything I dream about and wished I had” Kevin Gates 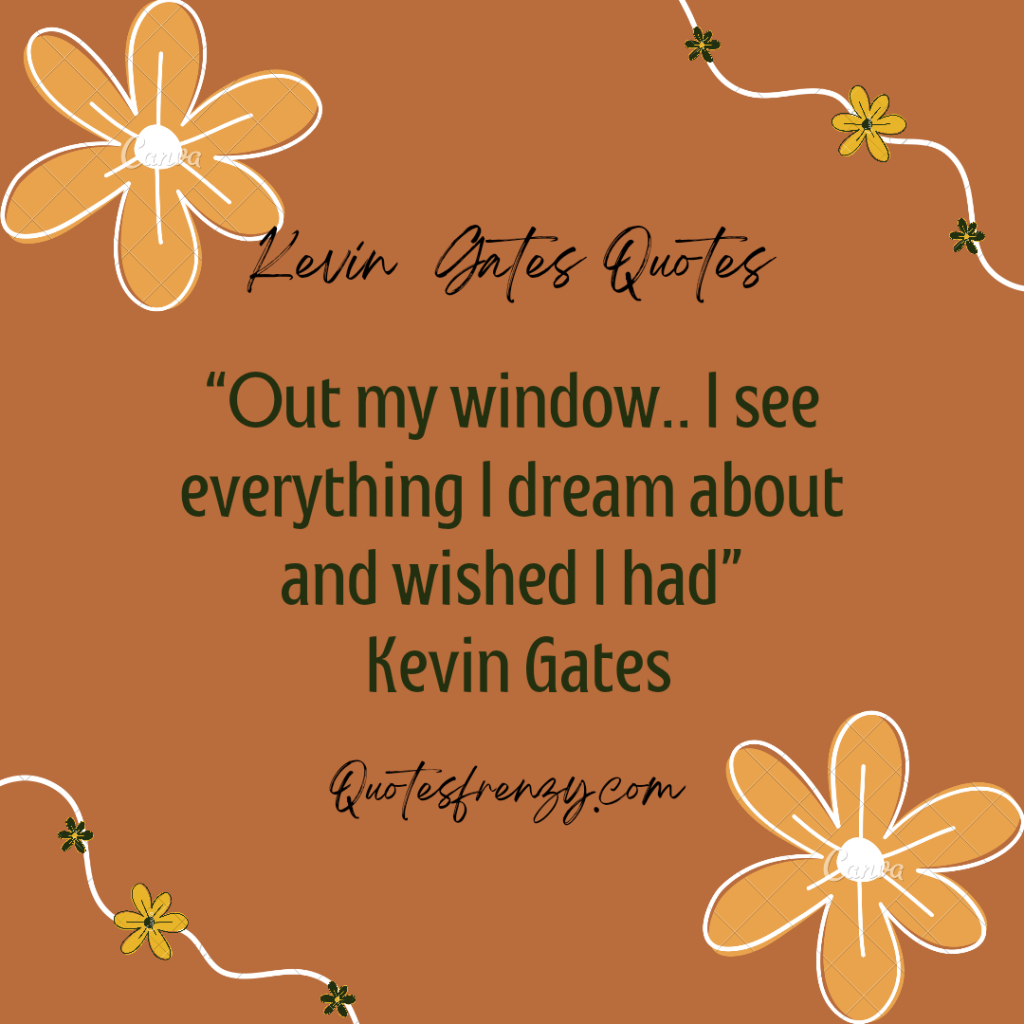 “Some may consider this a problem, I easily fall in love” Kevin Gates

“The energy in the daytime is so different because everyone is so unhappy and depressed and you can pick up on that energy psychokinetically. So I like to come out at night. Everything’s settled, you can see more.” Kevin Gates

“The ones that hate you most tend to be the people you know.” Kevin Gates

“When you come up in the slums, having nothin make you humble” Kevin Gates

“Why accept failure when success is free?” Kevin Gates 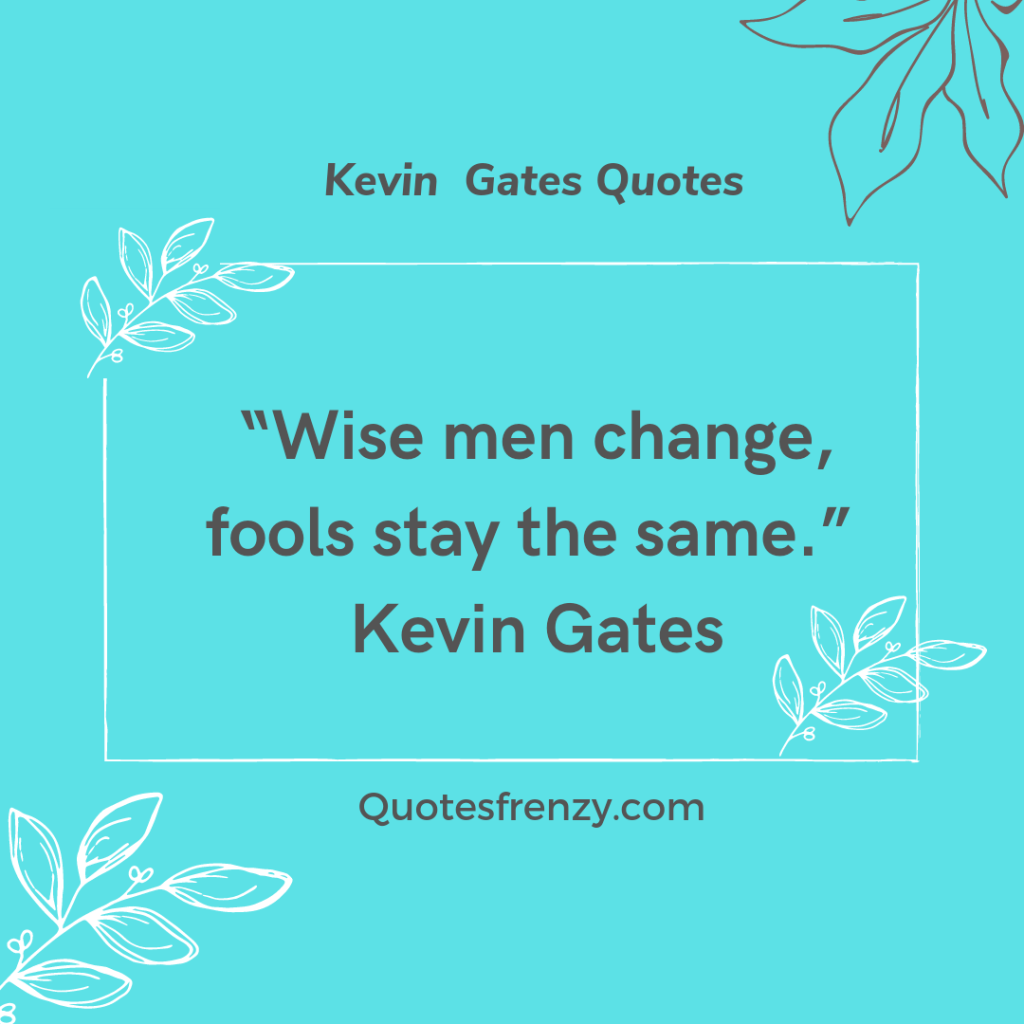 “Whatever an individual chooses to do with themselves, long as it doesn’t affect me and they’re respectful with it, I don’t care what they do. Because I’m not perfect and I have flaws, so who would I be to be judgmental?” Kevin Gates

I’ve had good times and I’ve had bad times and I reminisce, maybe when I lay down, but throughout my day I keep myself engulfed in whatever moment I’m in because it could steer me into a depressed state.– Kevin Gates Quotes

This quote by Kevin, urges us to stay focus.  We have all had positive and negative experiences.  However, during the day we should stay fixed on what we are doing.  Which should be something Do not keep thinking about negativity.  Stay positive and focused.

Why accept failure when success is free?– Kevin Gates Quotes 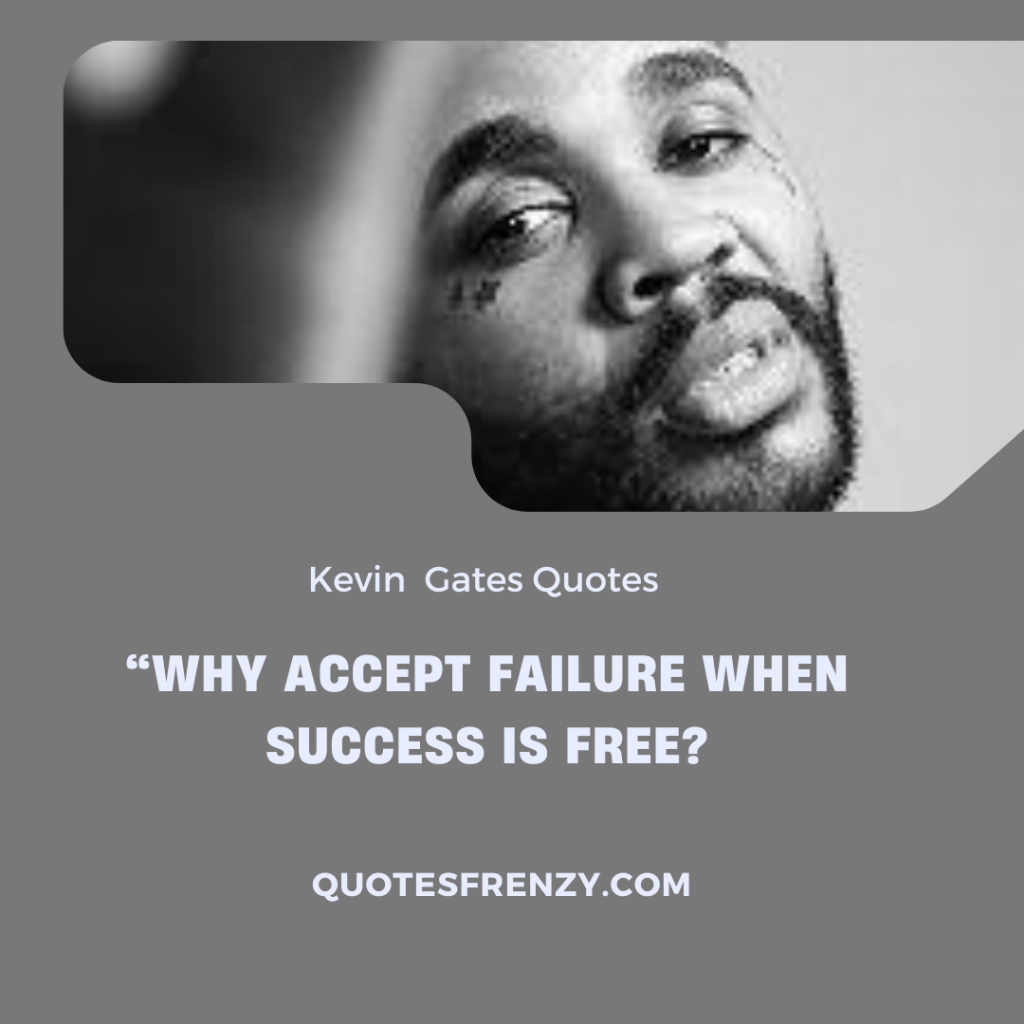 These words are simple but extremely powerful.  We should never give up.  Success is upon the horizon.  As they say if you try and you do not succeed make a few changes to your approach and then make another attempt.

These quotes should inspire you to succeed.  Know what your goals are and aim, then shoot.  Keeping in mind that time is a crucial factor but you should make the most of everyday.