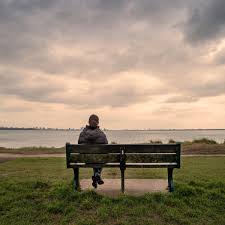 You are neither in love, nor engaged, and certainly not married? You are singles – and that’s good. Because, as a single life makes life much more fun anyway!

Life as a single is a roller coaster ride of feelings. The smallest things can make you incredibly happy, give you a stand or make you cry-actually just like life in a relationship as well. But because you are permanently told how abnormal or exaggerated great is the single existence, you erroneously assume your condition has something to do with your relationship status.

In truth, however, it is the other way round: your physical or mental reaction does not depend on your environment but on your daily constitution. Following are some Single Quotes that will give you inspiration. 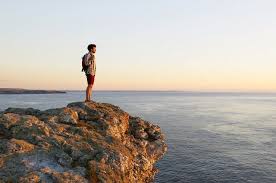 “Being single is pretty good. It’s a nice sense of irresponsibility.” Michael Douglas

“I love being single. It’s almost like being rich.” Sue Grafton 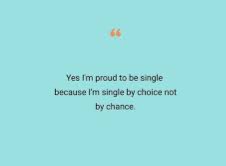 “Being brave enough to be alone frees you up to invite people into your life because you want them and not because you need them.” Mandy Hale

“Always remember that you were once alone, and the crowd you see in your life today are just as unecessary as when you were alone.” Michael Bassey Johnson 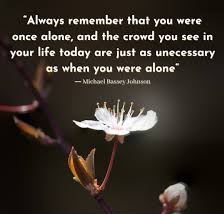 “A single thread of hope is stronger than all the chains that bind you.” Jeffrey Fry

“Single” is an opportunity to live life on your own terms and not apologize.” Mandy Hale 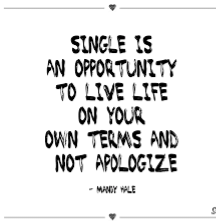 “Its better to “stay single” than being “single again” Sharfaraz Ahmed 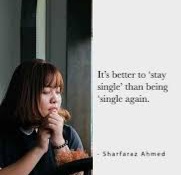 “Being alone is not the same as being on your own.” Katy Lee

“Take decision each single time to ascertain that you are getting the best every time.” Sunday Adelaja

“Just a single cord is enough to be tangled.” Munia Khan

“If you are single and don’t want to be. The only regret is staying that way.” Suzette R. Hinton

“Honesty is one of the key elements to a great relationship. If you cannot be honest with your partner, stay single.” Kemi Sogunle

“Our miseries are inseparable, so is our every single blessing.” Munia Khan

“Your single not because you are not good enough for one, it’s that you’re too good for the wrong one.” Chris Burkmenn

“Single life is the best life until you get hit by lonely nights.” Jonathan Anthony Burkett

“I’m single because I was born that way.” – Mae West

“Being single is pretty good. It’s a nice sense of irresponsibility.” – Michael Douglas 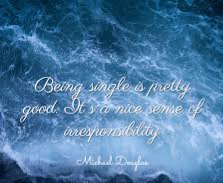 “I don’t like to be labeled as lonely just because I am alone.” ~ Delta Burke

“I’m dating a woman now who, evidently, is unaware of it.” ~ Garry Shandling

“Being single doesn’t necessarily mean you’re available. Sometimes you have to put up a sign that says “Do Not Disturb” on your heart.” ~ Wiz Khalifa

“Marriage is the only adventure open to the cowardly.” ~ Voltaire

“I love being single. It’s almost like being rich.” ~ Sue Grafton

“I don’t need anyone to rectify my existence. The most profound relationship we will ever have is the one with ourselves.” ~ Shirley MacLaine

“Being single used to mean that nobody wanted you. Now it means you’re pretty sexy and you’re taking your time deciding how you want your life to be and who you want to spend it with.” ~ Sarah Jessica Parker

“By persistently remaining single a man converts himself into a permanent public temptation.” ~ Oscar Wilde 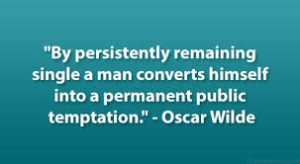 “You do not need to be loved, not at the cost of yourself. Of all the people you will know in the lifetime, you are the only one you will never leave or lose.” ~ Jo Coudert

“I must learn to love the fool in me the one who feels too much, talks too much, takes too many chances, wins sometimes and loses often, lacks self-control, loves and hates, hurts and gets hurt, promises and breaks promises, laughs and cries.” ~ Theodore Isaac Rubin

“He is his own best friend and takes delight in privacy whereas the man of no virtue or ability is his own worst enemy and is afraid of solitude.” ~ Aristotle 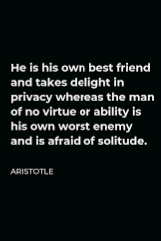 “Everything that irritates us about others can lead us to an understanding of ourselves.” ~ Carl Jung

“Today is Valentine’s Day – or, as men like to call it, Extortion Day!” ~ Jay Leno

“You have brains in your head. You have feet in your shoes. You can steer yourself in any direction you choose. You’re on your own, and you know what you know. And you are the guy who’ll decide where to go.” ~ Dr. Seuss

We’re born alone, we live alone, we die alone. Only through our love and friendship can we create the illusion for the moment that we’re not alone.” – Orson Welles

“Being alone with your feelings is the worst because you have nowhere to run. They’re here, dancing in your mind, and all you can do is handle.” – Aisha Sherly

“What a lovely surprise to finally discover how unlonely being alone can be.” – Ellen Burstyn

“There are some places in life where you can only go alone. Embrace the beauty of your solo journey.” – Mandy Hale

If you want to be happy, learn to be alone without being lonely. Learn that being alone does not mean being unhappy. The world is full of plenty of interesting and enjoyable things to do and people who can enrich your life.” – Michael Josephson

“Being alone has nothing to do with how many people are around.” – Richard Yates

“Loneliness does not come from being alone, but from being unable to communicate the things that seem important to you.” – Anonymous 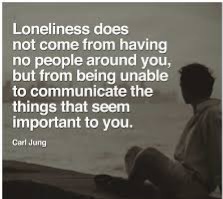 “Being alone doesn’t necessarily mean loneliness. People are great! But being alone is wonderful. I prefer the silence of alone, and the sounds of nature.” – Jayson Zabate

“I never found a companion that was so companionable as solitude.” ~ Henry David Thoreau

“I celebrate myself, and sing myself.” ~ Walt Whitman

“I love being single. I can come and go as I please and stay out as late as I want to.” ~ Eric Dickerson

“Love is only a dirty trick played on us to achieve continuation of the species.” ~ W. Somerset Maugham 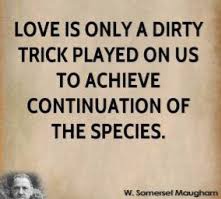 If you are still single, you should not worry at all. Rather you should believe that there is a lot of good things is yet to come. Your beautiful love story is still in the making.

Many times, it can be a great benefit in being single that there is no any risk of breaking a relationship. As long as you are single, you have plenty of time to have fun and enjoyment. There will be no one who will restrict your joy.

People who are just fresh singles are just cute. The love affair has only just fizzled and now they get back into the saddle. They usually look as awkward as puppies. Carelessly they fell upon everything that moves. Long-term singles, which have no partner on purpose, are already a little more confident. They have been unrelated for years and that is how they should stay. Not because they are ugly or stupid at least most of them are not but from conviction. And there are good arguments for their attitude.

Convince yourself of the fabulousness of the single life with Single Quotes.