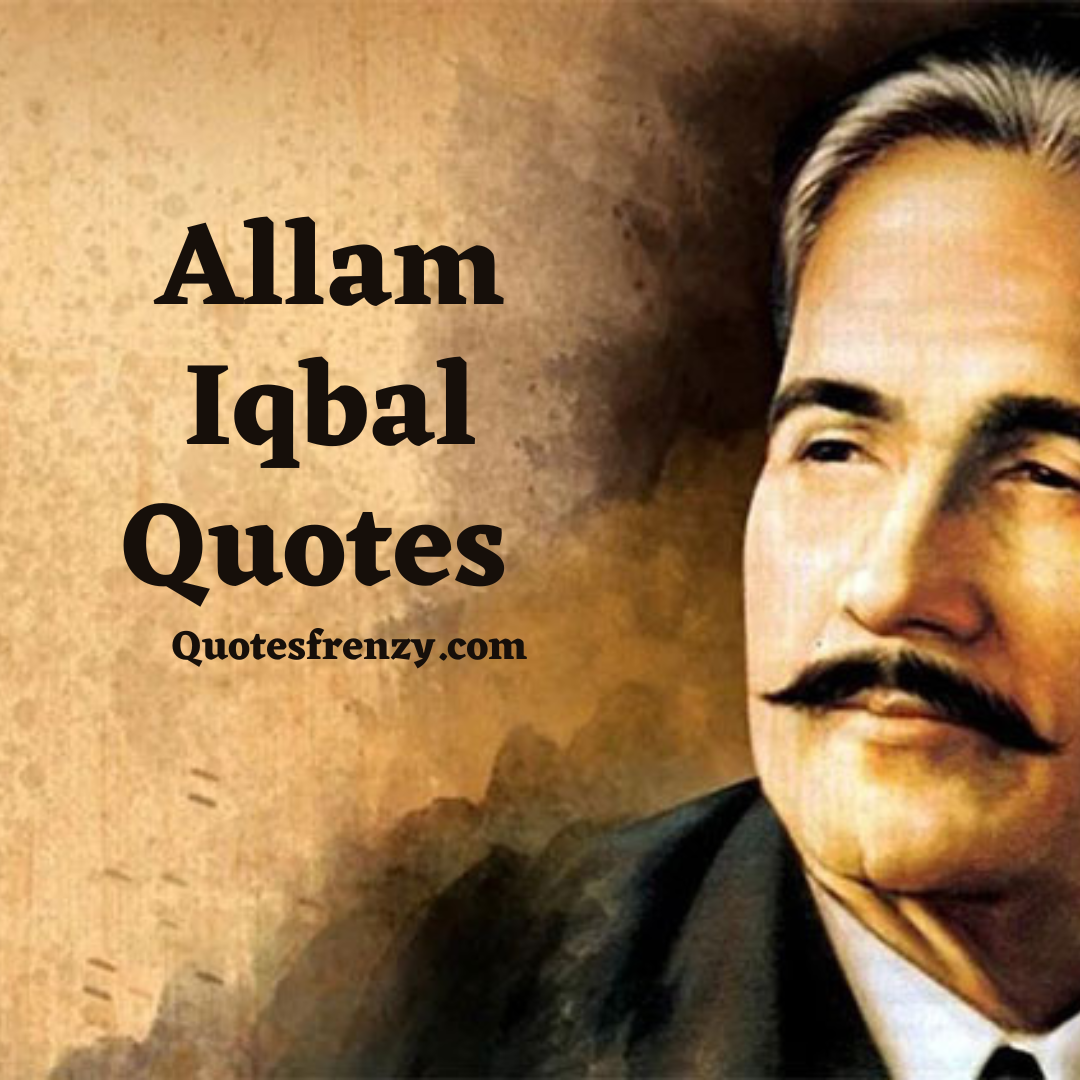 Sir Muhammad Iqbal ,was a South Asian Muslim writer, philosopher ,poet ,lawyer, scholar and politician, whose poetry in the Urdu language is considered among the greatest of the twentieth century.

“Failure is not fatal until we surrender; trying again is the key to glorious victory.” 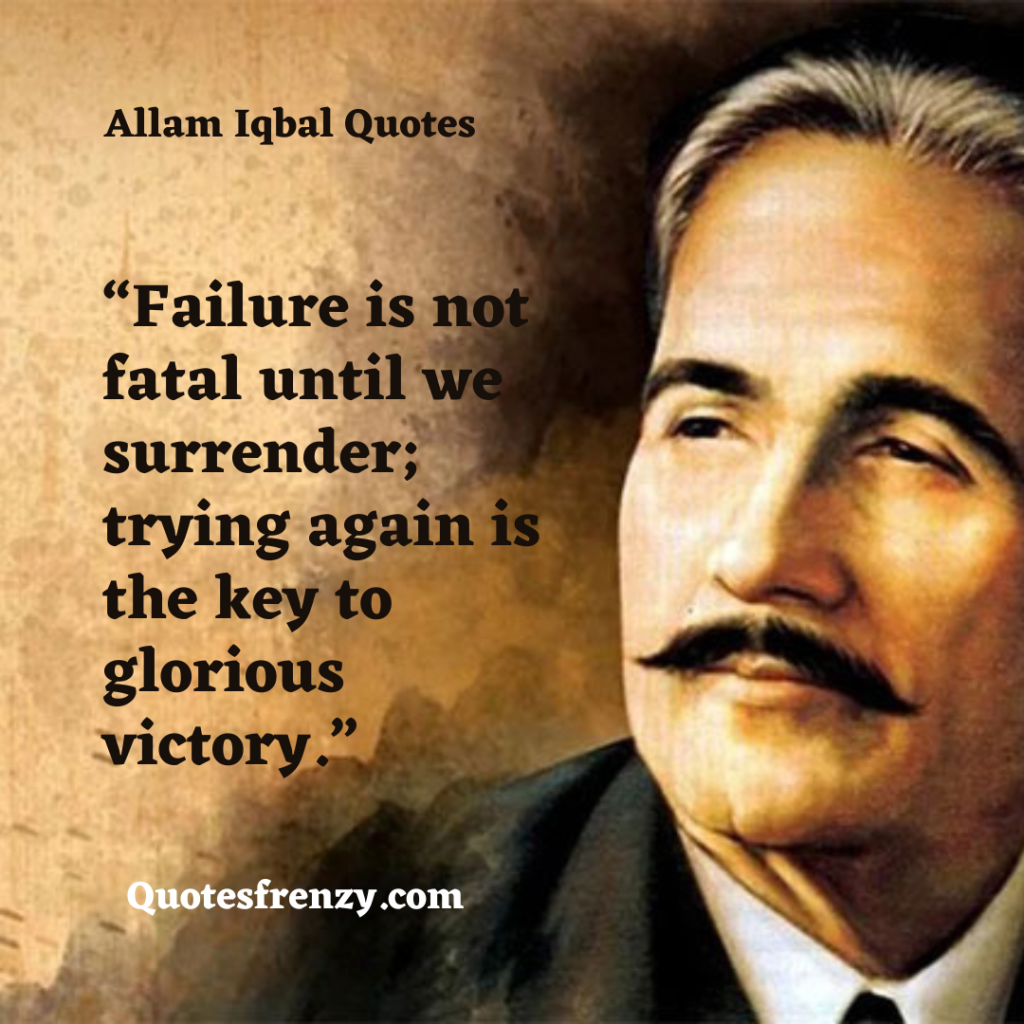 “The ultimate aim of the ego is not to see something, but to be something.”

“Words, without power, is mere philosophy.”

“God is not a dead equation!”

“Man is primarily governed by passion and instinct.”

“Vision without power does bring moral elevation but cannot give a lasting culture.”

“The thought of a limit to perceptual space and time staggers the mind.”

“But inner experience is only one source of human knowledge.”

“It is absolutely certain that God does exist.” 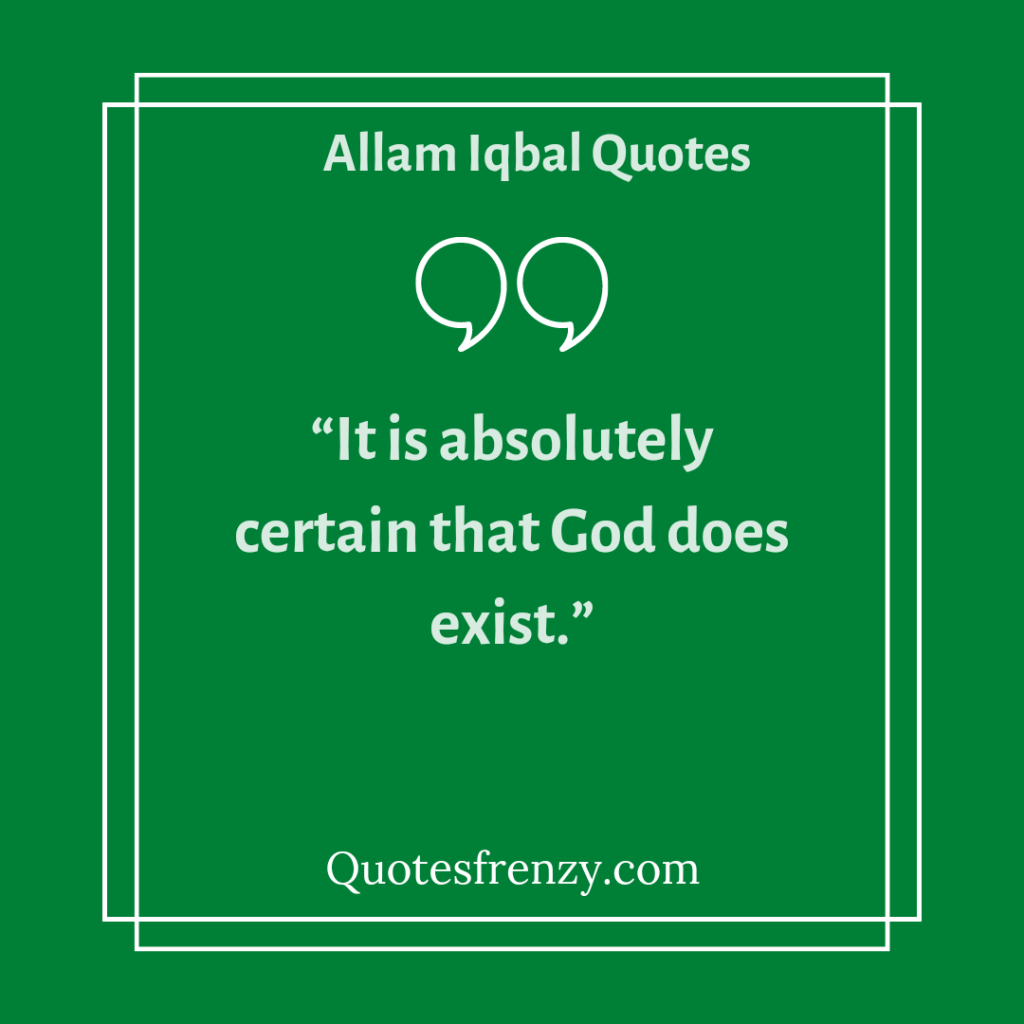 “Physiologically less violent and psychologically more suitable to a concrete type of mind.”

“Preserve your history and become everlasting; receive new life from the times that have gone by.”

“The possessor of a sound heart puts to test his power by entering into big adventures.”

“People who have no hold over their thinking process are likely to be ruined by liberty of thought.”

“From your past emerges the present, and from the present is born your future.”

“Though the terror of the sea gives to none security, in the secret of the shell. Self preserving we may dwell.”

“The standpoint of the man who relies on religious experience for capturing Reality must always remain individual and incommunicable.”

“Democracy is a system where people are counted not weighed.” 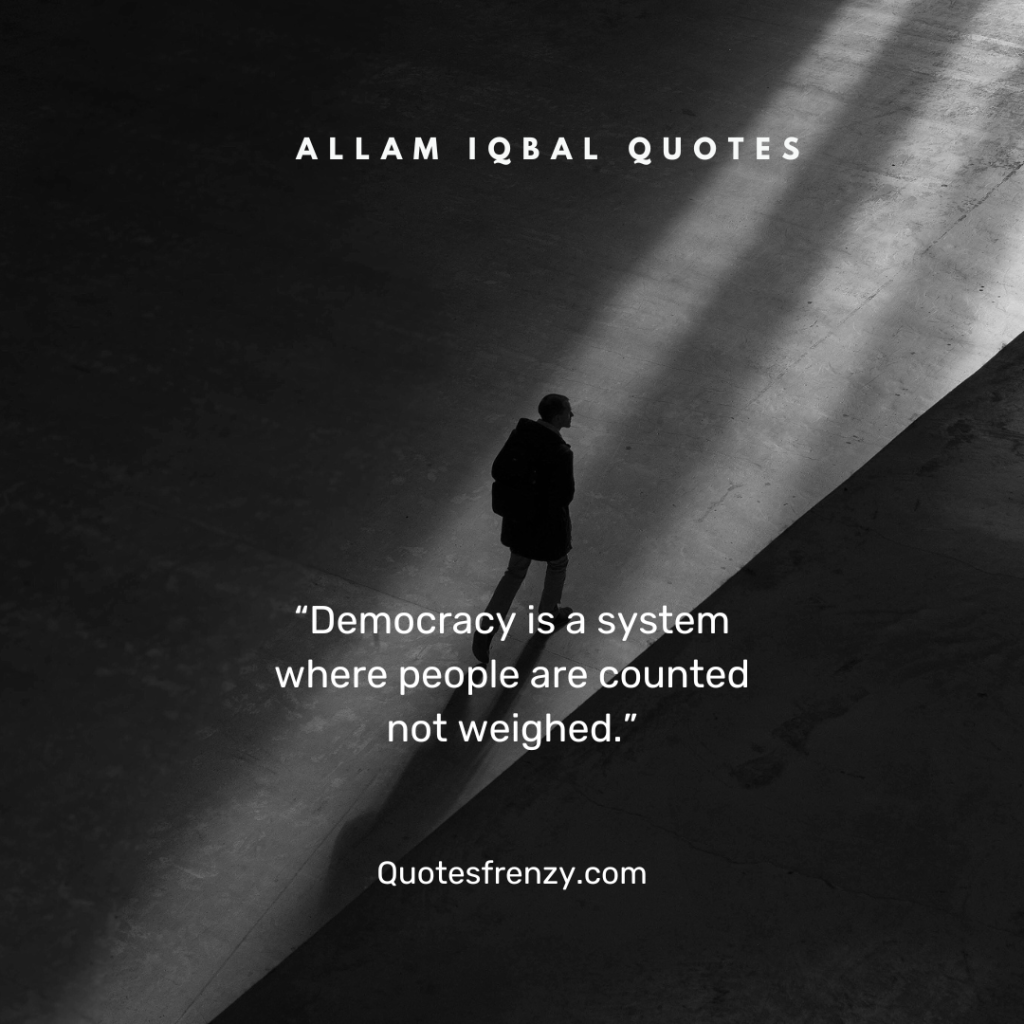 “When truth has no burning, then it is philosophy, when it gets burning from the heart, it becomes poetry.”

“My ancestors were Brahmins. They spent their lives in search of god. I am spending my life in search of man.”

“A wrong concept misleads the  understanding; a wrong deed degrades the whole man, and may eventually demolish the structure of the human ego”.

“If faith is lost, there is no security and there is no life for him who does not adhere to religion.”

“The wing of the Falcon brings to the king, the wing if the crow brings him to the cemetery.” 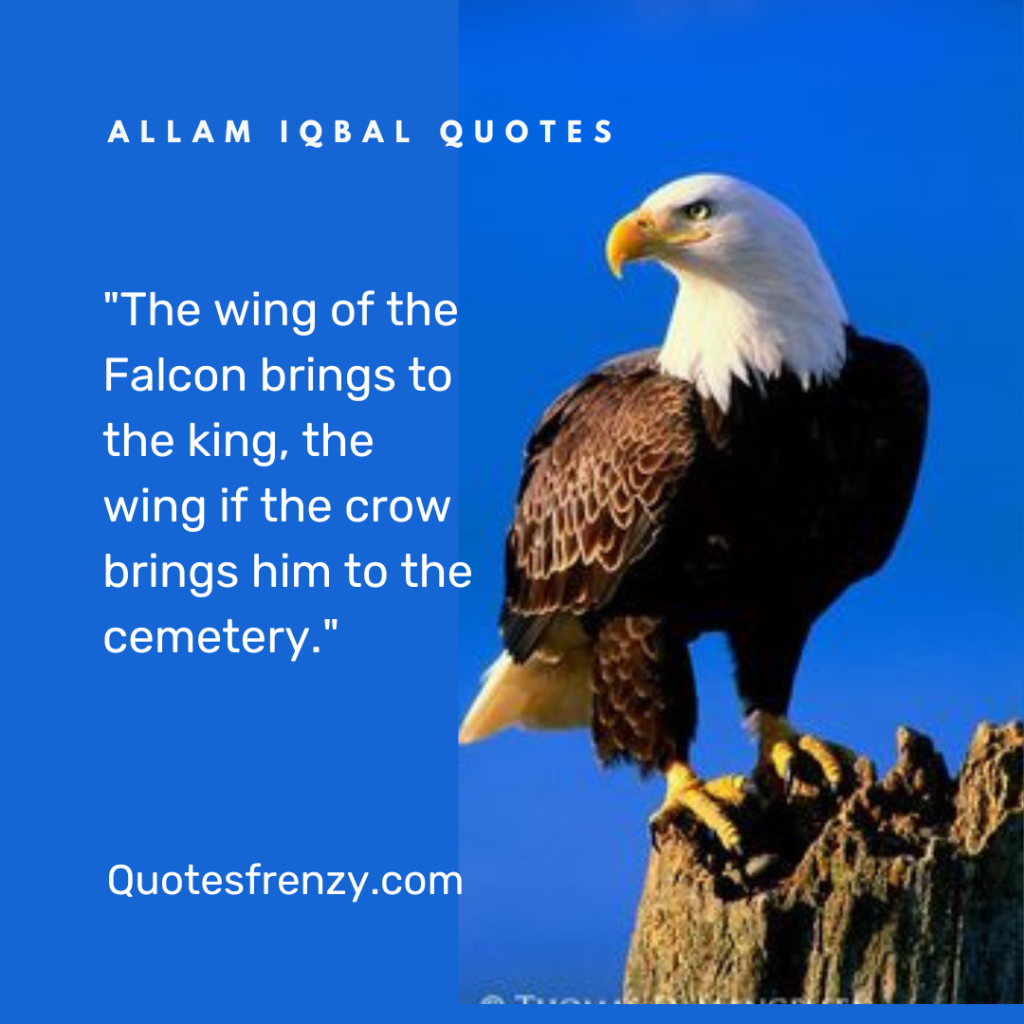 “Everything that possesses life dies if it has to live in uncongenial surroundings.”

“I lead no party; I follow no leader. I have given the best part of my life to careful study of Islam, its law and polity, its culture, its history and its literature.”

“A community receives light from its history, it becomes aware of itself by remembrance of its history.”

“The man of Love follows the path of God-and shows affection to both the believer and the nonbe-liever.”

“When the thinking of a people becomes corrupt, the pure silver becomes impure in its hands.”

“I tell the truth: your enemy is also your friend-his presence makes your life fuller and richer.” 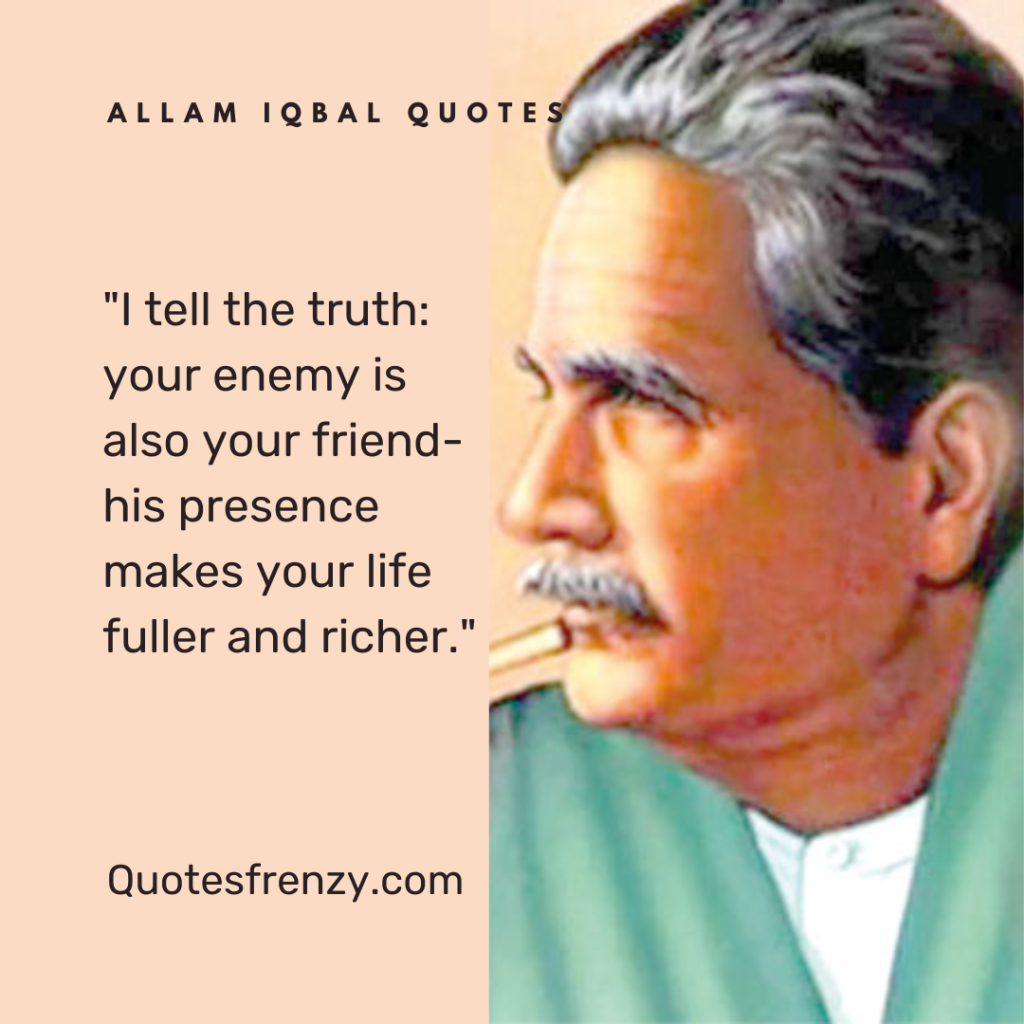 “But only a brief moment is granted to the brave one breath or two, whose wage is,
The long nights of the grave”.

“The soul is neither inside nor outside the body; neither proximate to nor separate from it.”

“I tell you the sign of a believer; When Death comes, there is a smile on his lips”.

“Nations are born in the hearts of poets, they prosper and die in the hands of politicians.”

“Life is a struggle and not a matter of privilege. It is nothing but one’s knowledge of the temporal and the spiritual world.”

“If one cannot live the life of the brave, then it is better to die like the brave.”

“Be aware of your own worth, use all of your power to achieve it. Create an ocean from a dewdrop. Do not beg for light from the moon, obtain it from the spark within you.” 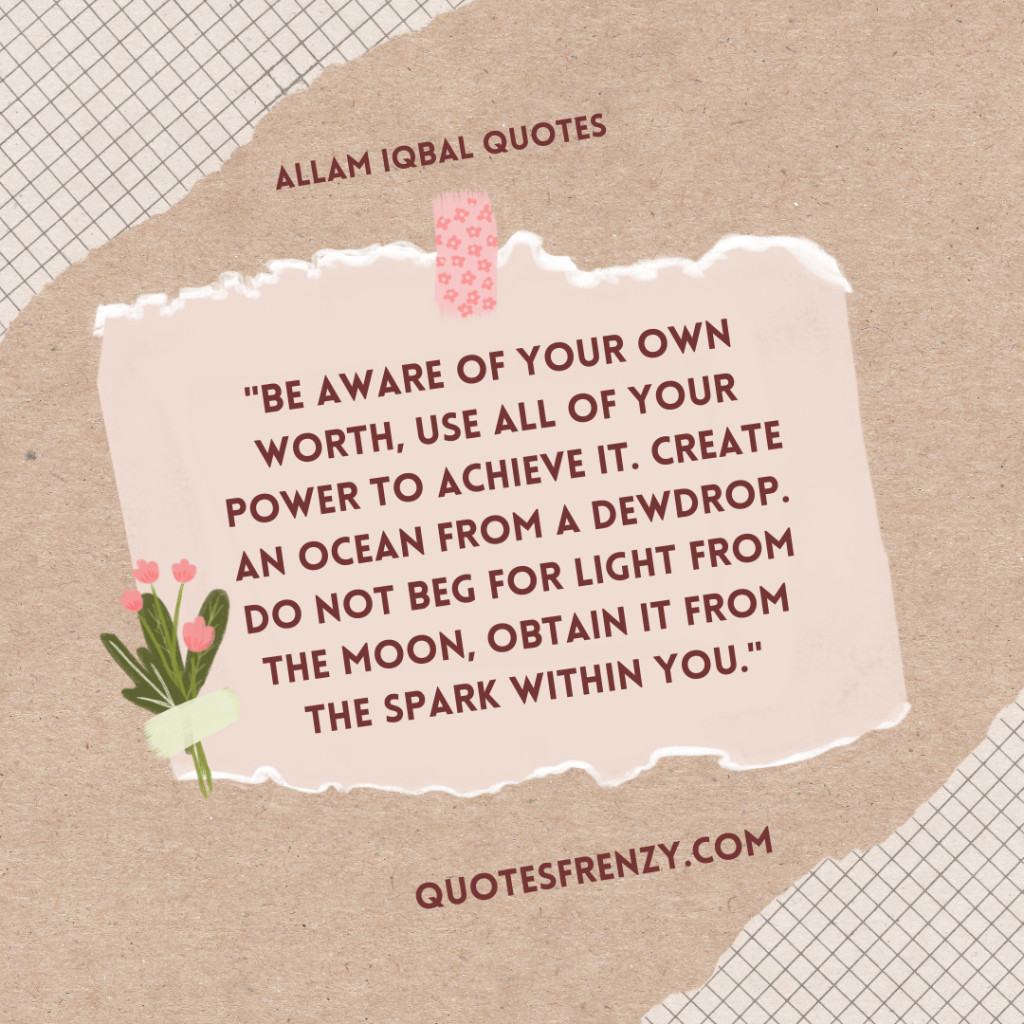 “The heart is like a mirror. Do not prevent it from being broken. It’s breakage is more dearer in the sight of its maker [Allah], than its safety. Almighty Allah being indeed the Maker”.

“It is the mysterious touch of the ideal that animates and sustains the real, and through it alone we can discover and affirm the ideal.”

“In the first period religious life appears as a form of discipline which the individual or a whole people must accept as an unconditional command without any rational understanding of the ultimate meaning and purpose of that command.”

“The poet’s nature is all searching, creator and nourisher of desire; the poet is like the heart in a people’s breast, a people without a poet is a mere heap of clay. If the purpose of poetry is the fashioning of men, poetry is likewise the heir of prophecy.”

“The new world is as yet behind the veil of destiny In my eyes, however its dawn has been unveiled”. 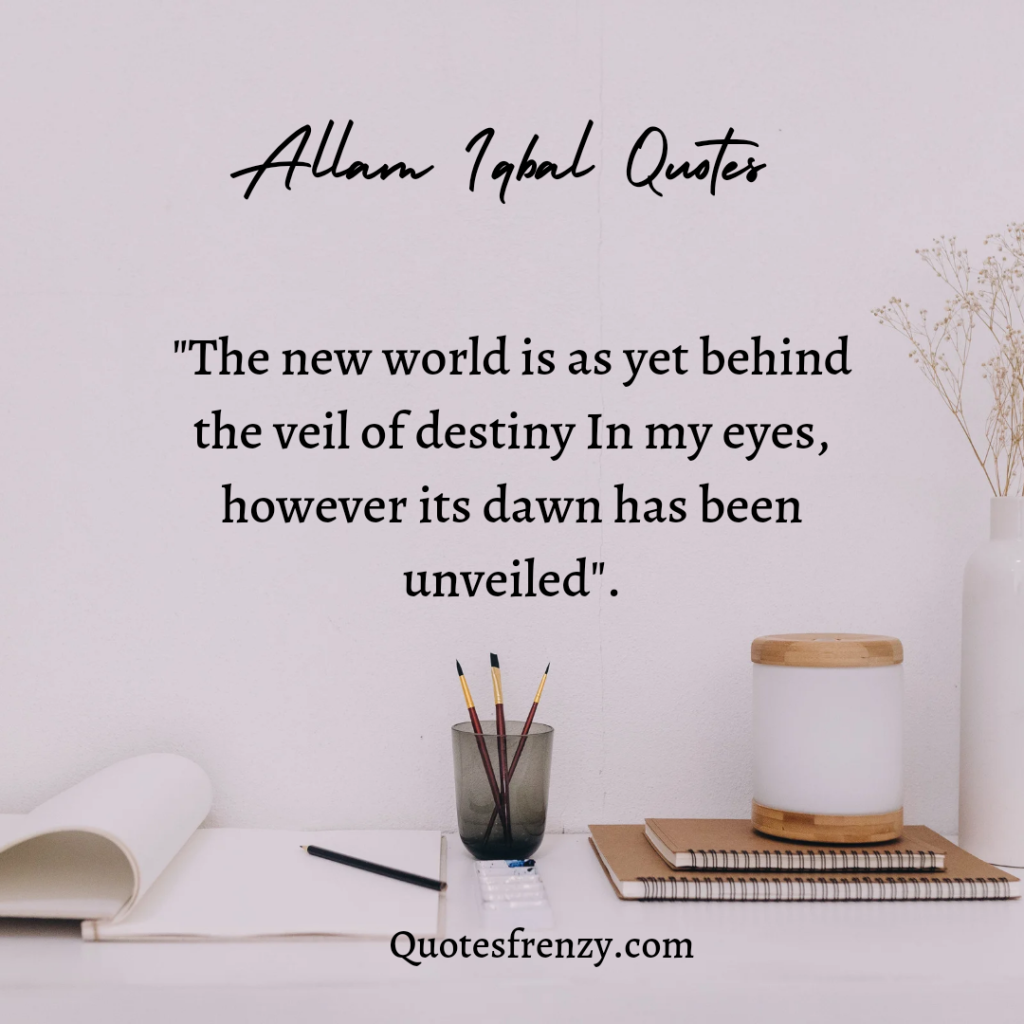 “People who have no hold over their process of thinking ara likely to be ruined by liberty of thought.”

“Nations are born in the hearts of poets, they prosper and die in the hands of politicians.”

“The Westerners have lost the vision of heaven, they go hunting for the pure spirit in the belly. The pure soul takes not color and scent from the body, and Communism has nothing to do save with the body.” 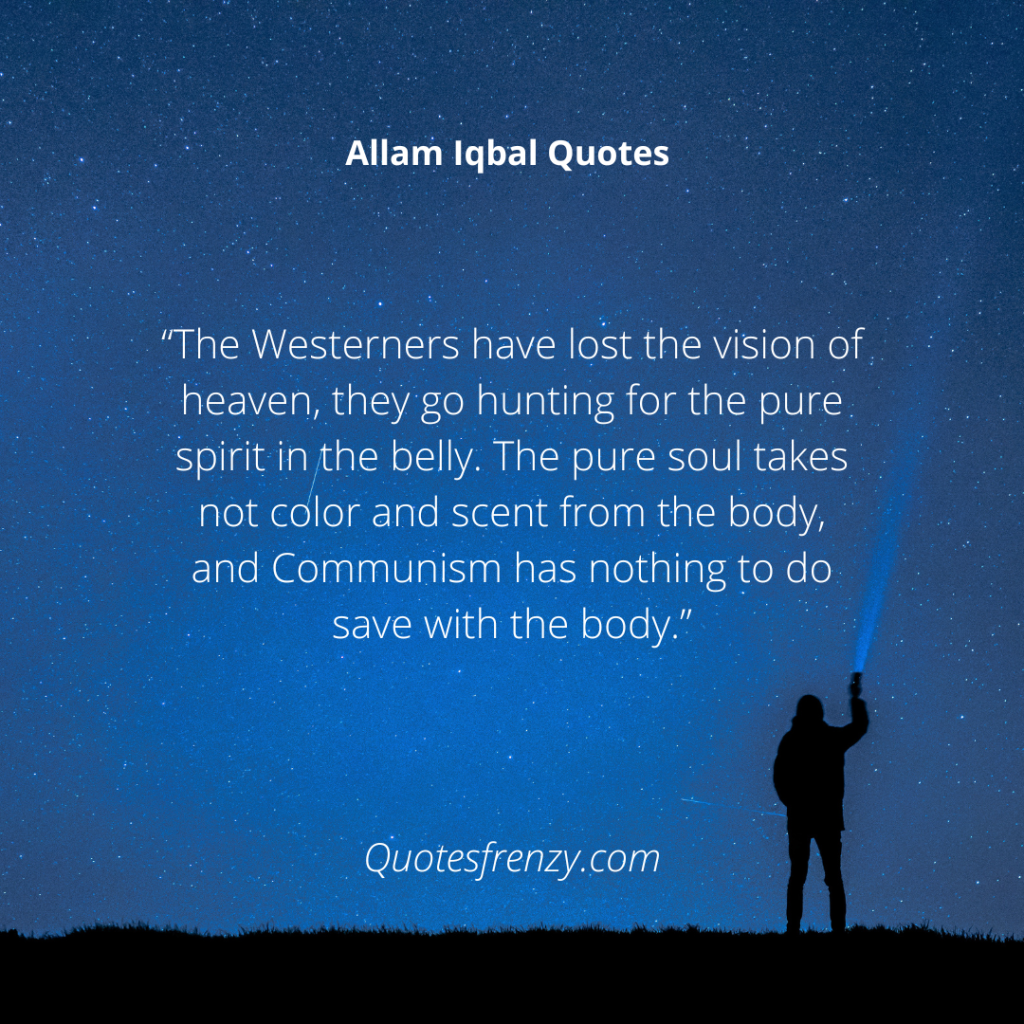 “I am but as the spark that gleams for a moment,His burning candle consumed me – the moth;His wine overwhelmed my goblet,
The master of Rum transmuted my earth to gold,And set my ashes aflame.”

“Let this be our beautiful departure from stagnation; let our minds come alive; enter another dimension; go beyond the stars eagerly struggling to find that… which our naked eyes did not know existed; rise like a falcon born to soar and not be alone but be present amongst others.”

“The revealed and mystic literature of mankind bears ample testimony to the fact that religious experience has been too enduring and dominant in the history of mankind to be rejected as mere illusion. There seems to be no reason, then, to accept the normal level of human experience as fact and reject its other levels as mystical and emotional.”

“Look at the evils of the world around you and protect yourself from them. Our teachers give all the wrong messages to our youth, since they take away the natural flare from the soul. Take it from me that all knowledge is useless until it is connected with your life, because the purpose of knowledge is nothing but to show you the splendors of yourself!”

“The immediacy of mystic experience simply means that we know God just as we know other objects. God is not a mathematical entity or a system of concepts mutually related to one another and having no reference to experience.” 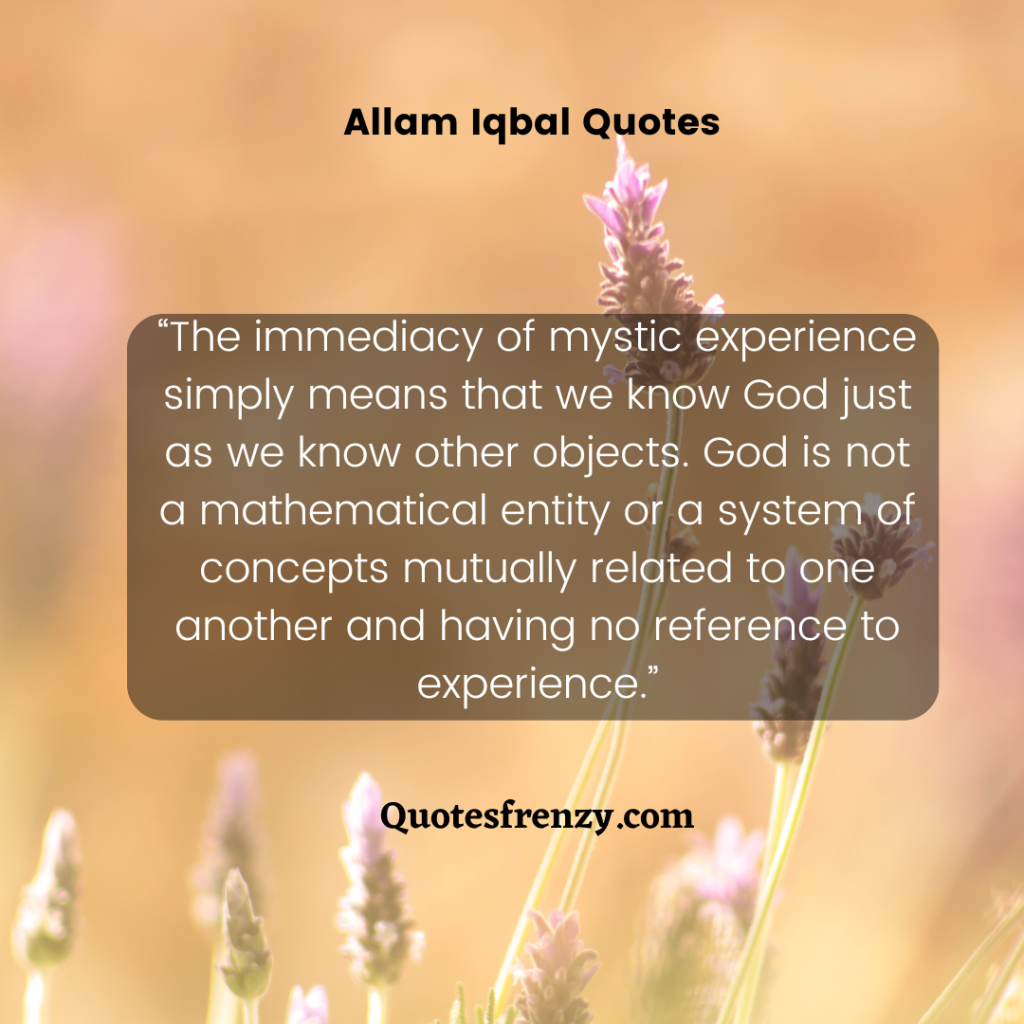 “What is the character and general structure of the universe in which we live? Is there a permanent element in the constitution of this universe? How are we related to it? What place do we occupy in it, and what is the kind of conduct that befits the place we occupy? These questions are common to religion, philosophy, and higher poetry”.

“We have strayed away from God, and He is in quest of us; Like us, He is humble and is a prisoner of desire: He is hidden in every atom, and yet is a stranger to us: He is revealed in the moonlight, and in the embrace of houses.”

“I have already indicated to you the meaning of the word religion, as applied to Islam. The truth is that Islam is not a Church. It is a State conceived as a contractual organism long before Rousseau ever thought of such a thing, and animated by an ethical ideal which regards man not as an earth-rooted creature, defined by this or that portion of the earth, but as a spiritual being understood in terms of a social mechanism, and possessing rights and duties as a living factor in that mechanism.”

“It cannot be denied that Islam, regarded as an ethical ideal plus a certain kind of polity – by which expression I mean a social structure regulated by a legal system and animated by a specific ethical ideal – has been the chief formative factor in the life-history of the Muslims of India. It has furnished those basic emotions and loyalties which gradually unify scattered individuals and groups, and finally transform them into a well-defined people, possessing a moral consciousness of their own.”