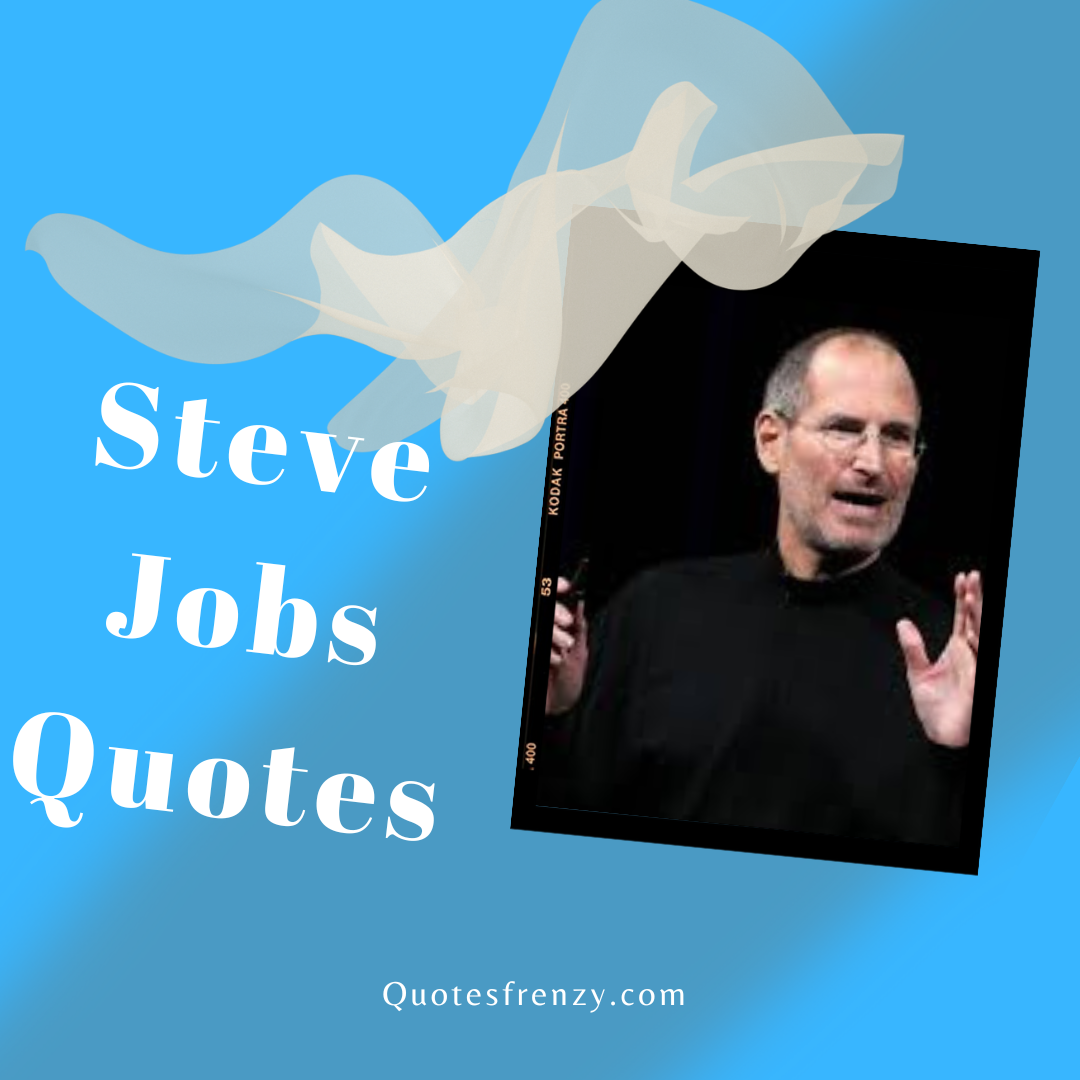 Steve Jobs Quotes-Steve Paul Jobs was an American entrepreneur, businessman, inventor and an industrial designer. He was the co-founder, chairman and chief executive officer of Apple Inc.; CEO and majority shareholder. A wonderful and a multi-talented man. Here are some of his quotes, which are still memorable and helpful for our daily lives.

My favorite thing in life don’t cost any money. It’s really clear that the most precious resource well have is time – Steve Jobs 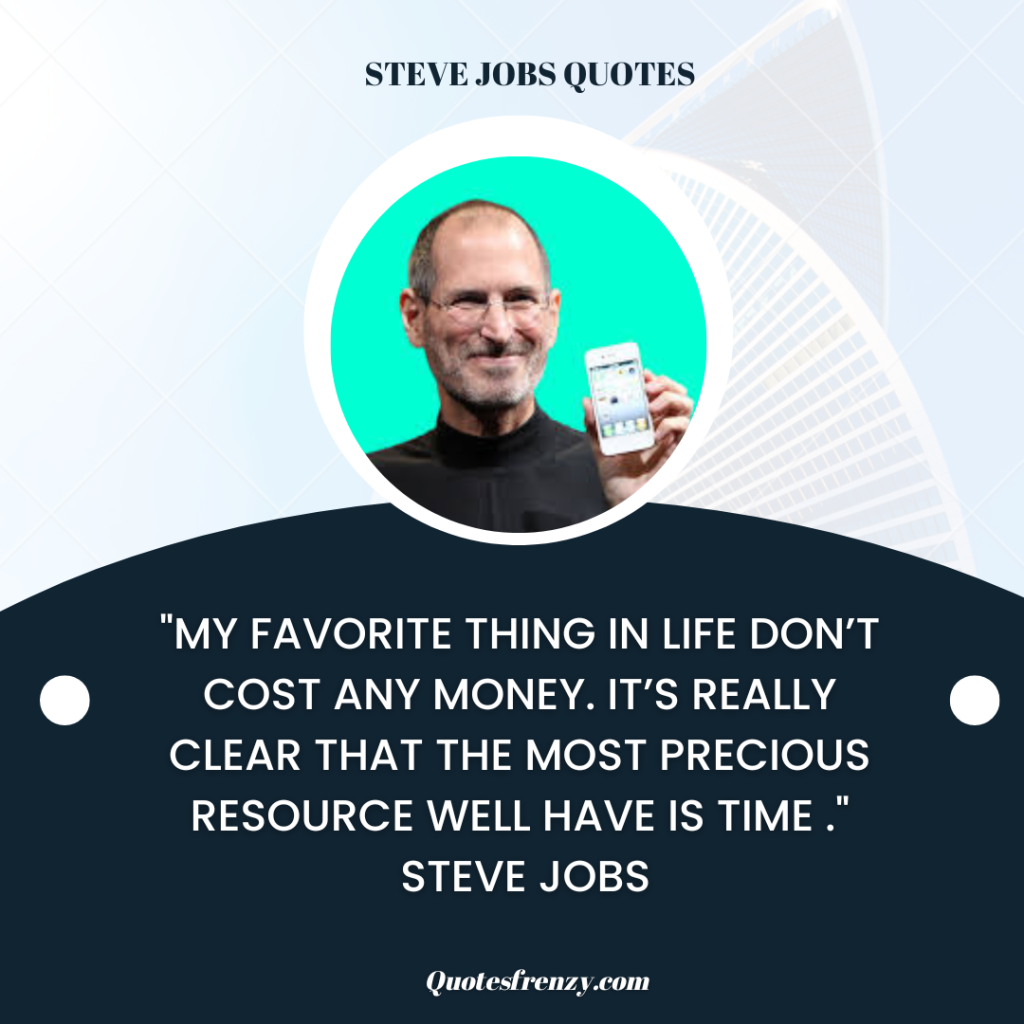 A wonderful Steve Jobs Quotes which certainly teaches us that time is the most important part of our lives, and it is the best resource of our lives. It doesn’t cost us money, it is given to us free, but we tend to miss-use it and waste it. Later we regret that we wasted it, whereas Steve Jobs was a man who made the most out of every single minute he had, which is why he was a successful and a multi-talented man. So don’t waste your time, use it wisely.

“Sometimes life hits you in the head with a brick. Don’t lose faith.” Steve Jobs 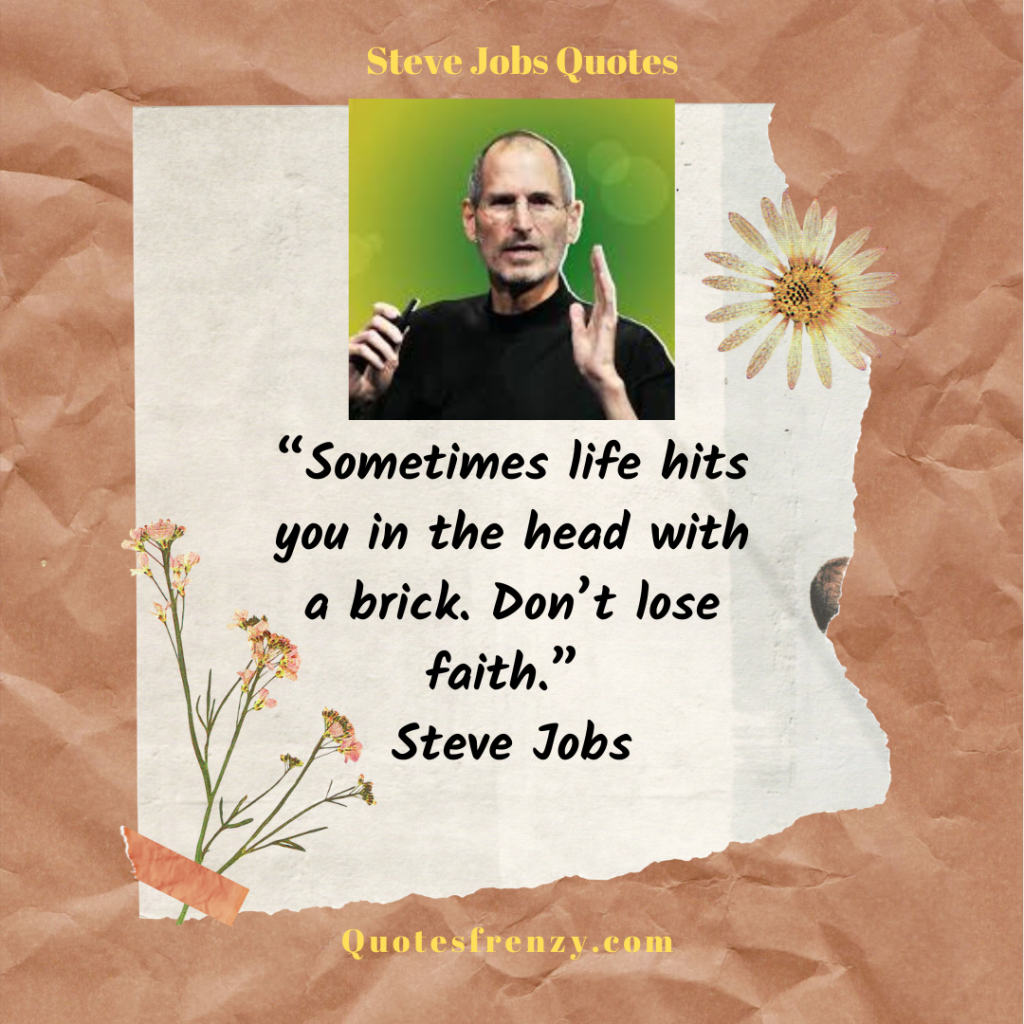 “And we’ve all chosen to do this with our lives. So it better be damn good. It better be worth it.” Steve Jobs 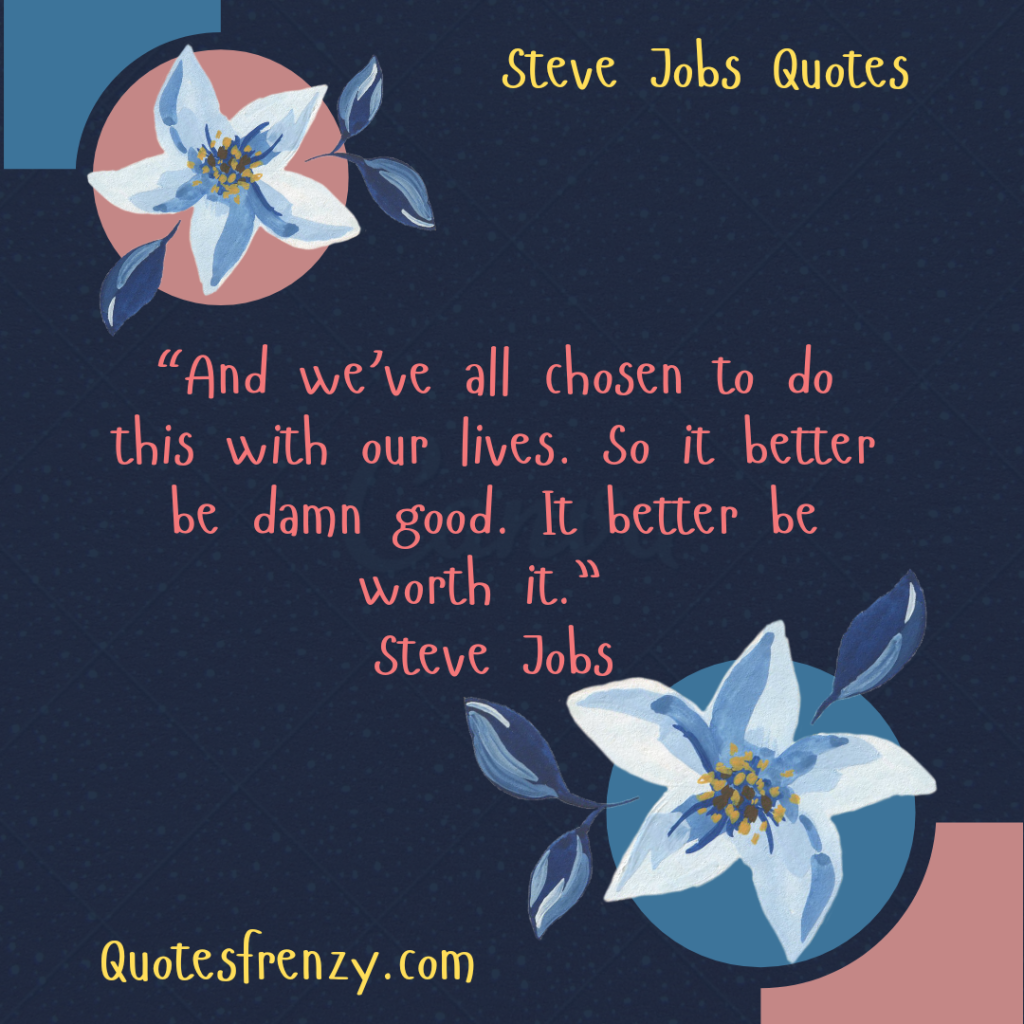 “A-plus players like to work together and they don’t like it if you tolerate B work.” Steve Jobs

“Design is not just what it looks like and feels like. Design is how it works.” Steve Jobs 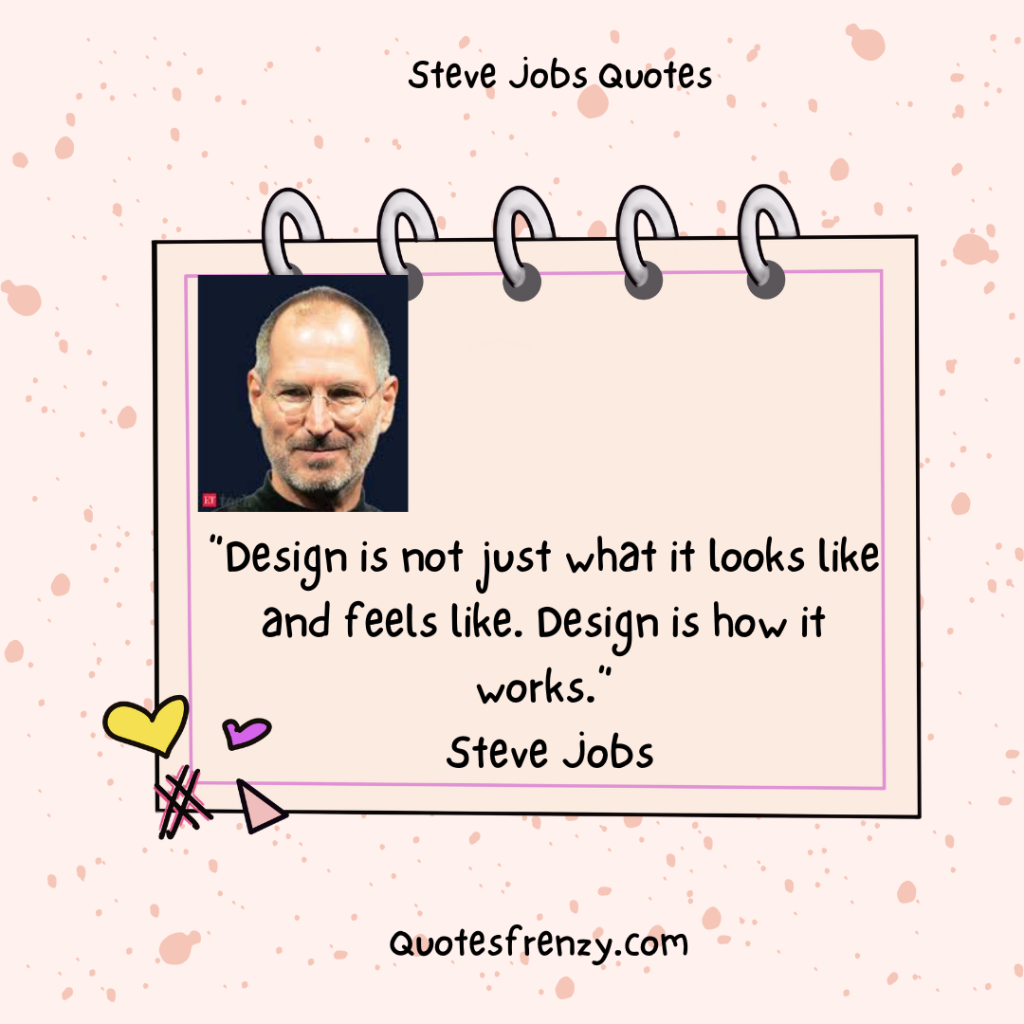 “Don’t settle, as with all matters of the heart you’ll know when you find it.” Steve Jobs

“Everybody in this country should learn how to program a computer, because it teaches you how to think.” Steve Jobs

“Everyone here has the sense that right now is one of those moments when we are influencing the future.” Steve Jobs

“Great things in business are never done by one person, they’re done by a team of people.” Steve Jobs

“I would trade all of my technology for an afternoon with Socrates.” Steve Jobs

“If you haven’t found it yet, keep looking.” Steve Jobs 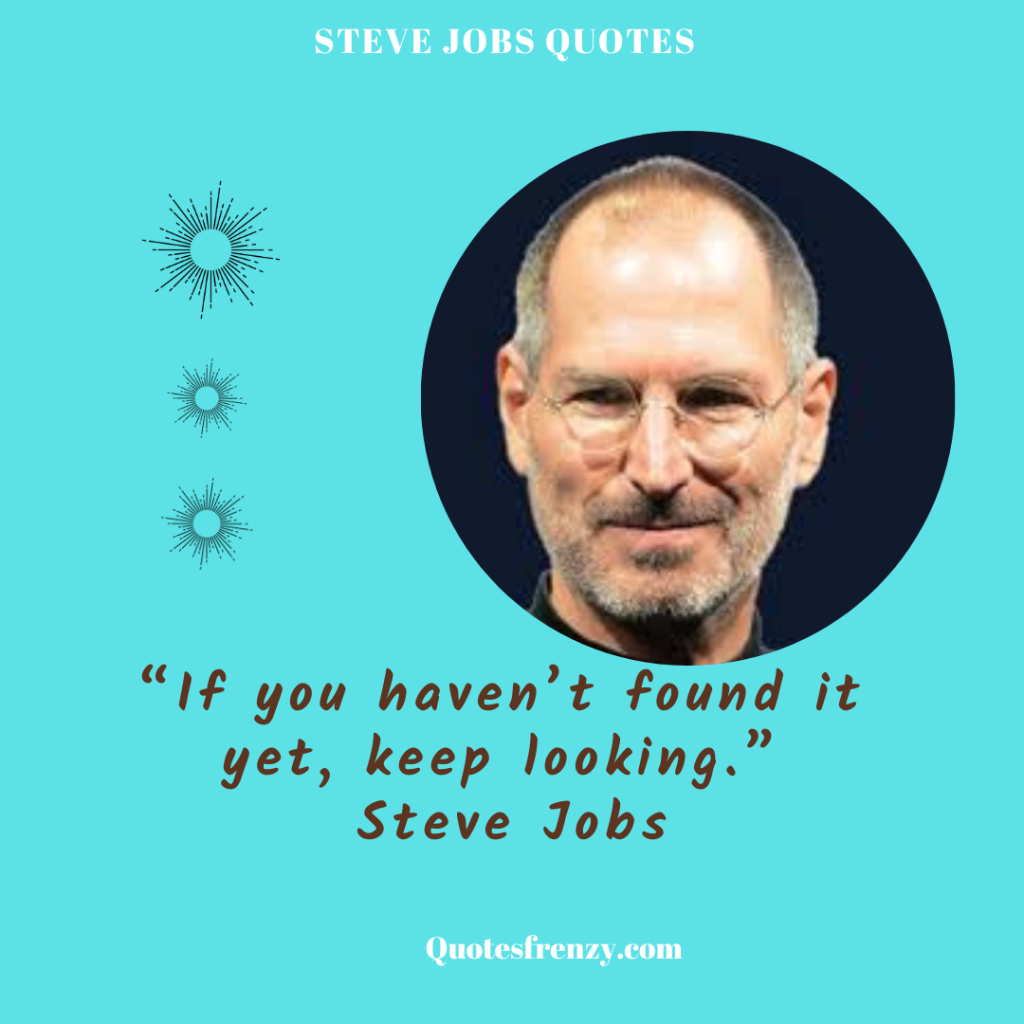 “If you live each day as it was your last, someday you’ll most certainly be right.” Steve Jobs

“Innovation distinguishes between a leader and a follower.” Steve Jobs

“I’ve always wanted to own and control the primary technology in everything we do.” Steve Jobs

“Quality is more important than quantity. One home run is much better than two doubles.” Steve Jobs

“Simple can be harder than complex. You have to work hard to get your thinking clean to make it simple.” Steve Jobs

“That’s been one of my mantras – focus and simplicity. Simple can be harder than complex.” Steve Jobs

“The only way to be truly satisfied is to do what you believe is great work.” Steve Jobs

“The people who are crazy enough to think they can change the world are the ones who do.” Steve Jobs

“You have to trust in something,your gut, destiny, life, karma, whatever.” Steve Jobs

“Whatever you do, you must never let the voice in your head control the brain in your heart.” Steve Jobs

“You can’t connect the dots looking forward, can only connect them looking backwards.” Steve Jobs

“Things don’t have to change the world to be important.” Steve Jobs 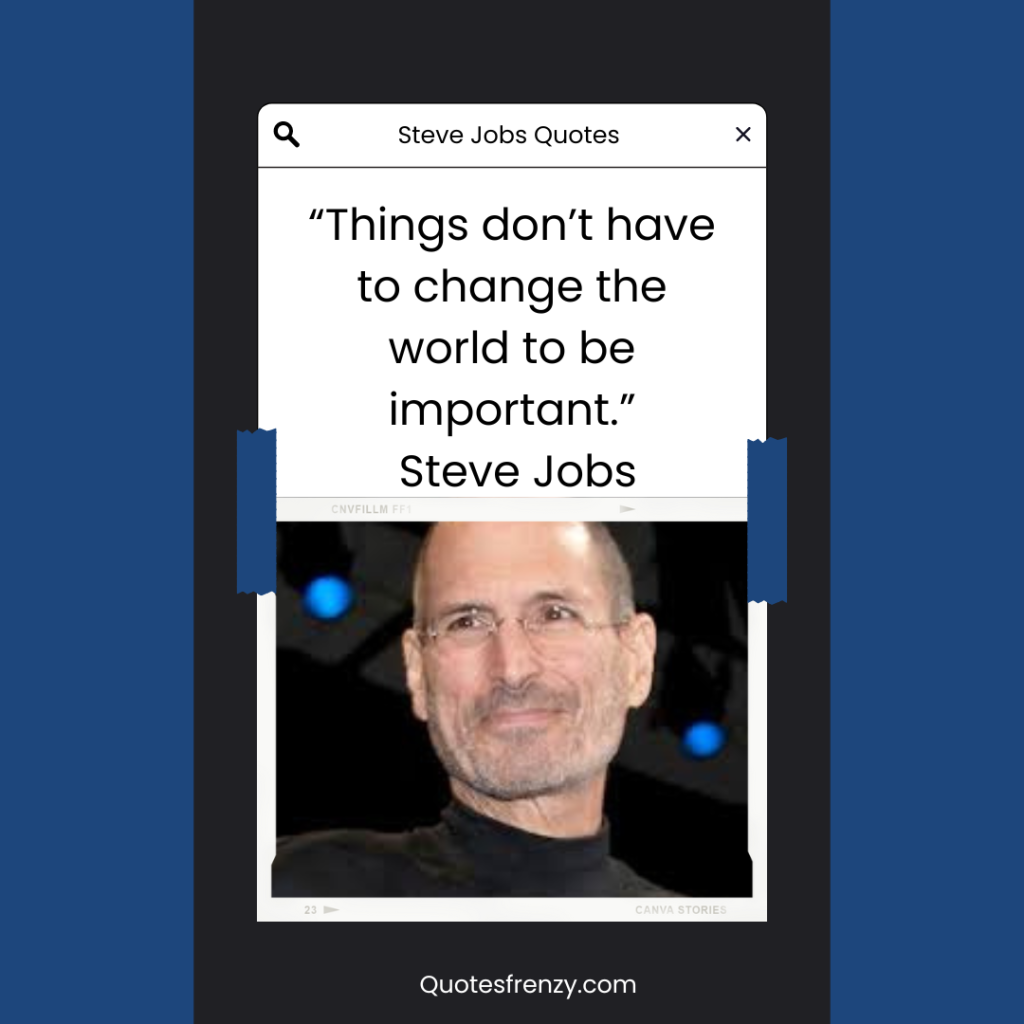 “Your time is limited, so don’t waste it living someone else’s life.” Steve Jobs

Sometimes life is going to hit you in the head with a brick. Don’t lose faith – Steve Jobs 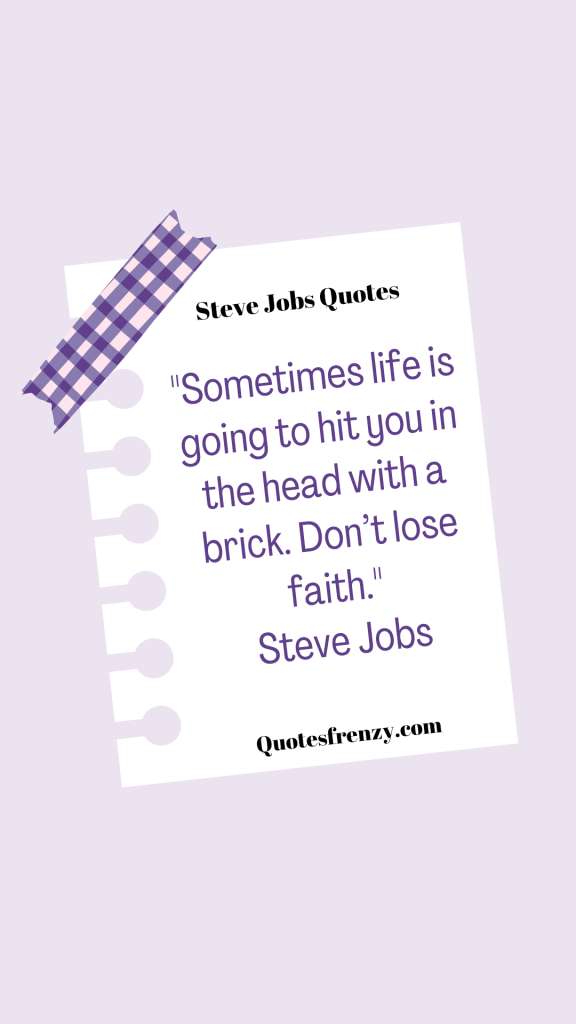 Another wonderful Steve Jobs Quotes, in which he teaches us that life may knock us down and bring a lot of conflicts against as, all of which may seem hard to live with, or carry alongside of us. It gets heavier, the burden gets worse day by day, but do not lose faith, for faith is the only thing that would create a path for you, when there is none available.

Design is not just what it looks like and feels like. Design is how it works – Steve Jobs

The quote mentioned above, thoroughly explains a fact for those who call it a great design when it does nothing at all, and for those who says discourage a great design that works. Remember folks, designing isn’t for appearance, designing is to make it work with how to tend to create it, what good is a design if it doesn’t work? This quote tends to be one of the quote that Steve Jobs wrote when he was successful with his designing talents. It is true, and not fake at all that things may always look great from the outside, but is nothing but a waste in the inside. So before you judge, make sure you test it out first.