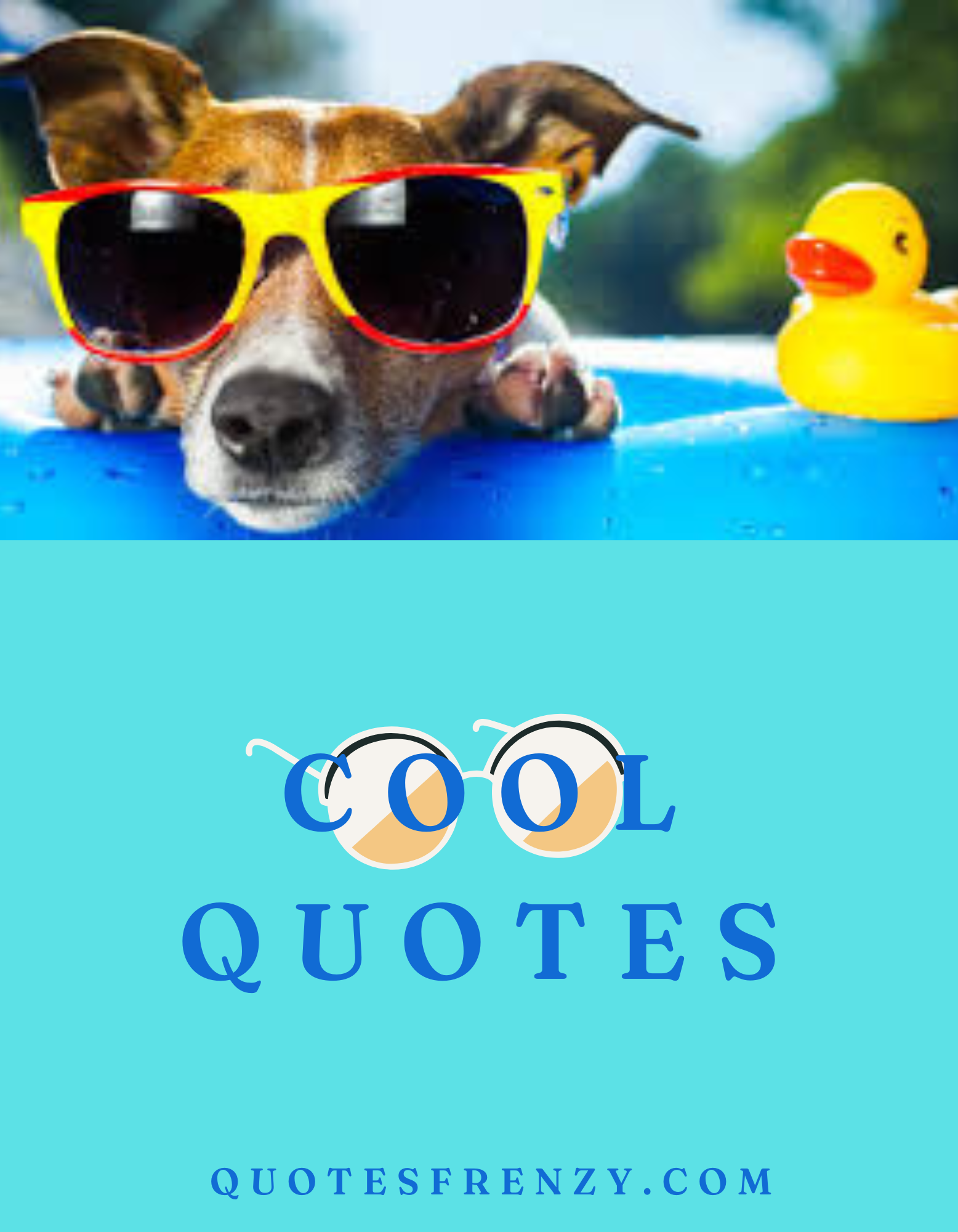 Cool Quotes-The idea of being cool has been misused by many especially the young people. Being cool does not mean emulating some other person who is smart, but it means that being yourself in how you handle things and more importantly succeed without showing off. A cool person is admirable, they are known to be down to earth people, and they succeed without necessarily bragging about it.

A person’s lifestyle is all that it makes them be cool, this is a lifestyle that is simple and attractive. Look cool, dress cool, live cool and relate cool with others by knowing some of the Cool Quotes. Among the people who have identified the right meaning of being cool are the following

“Being Cool is Being Your Own Self, Not Doing Something That Someone Else is Telling You To Do” Venessa Hudgens – Cool Quotes 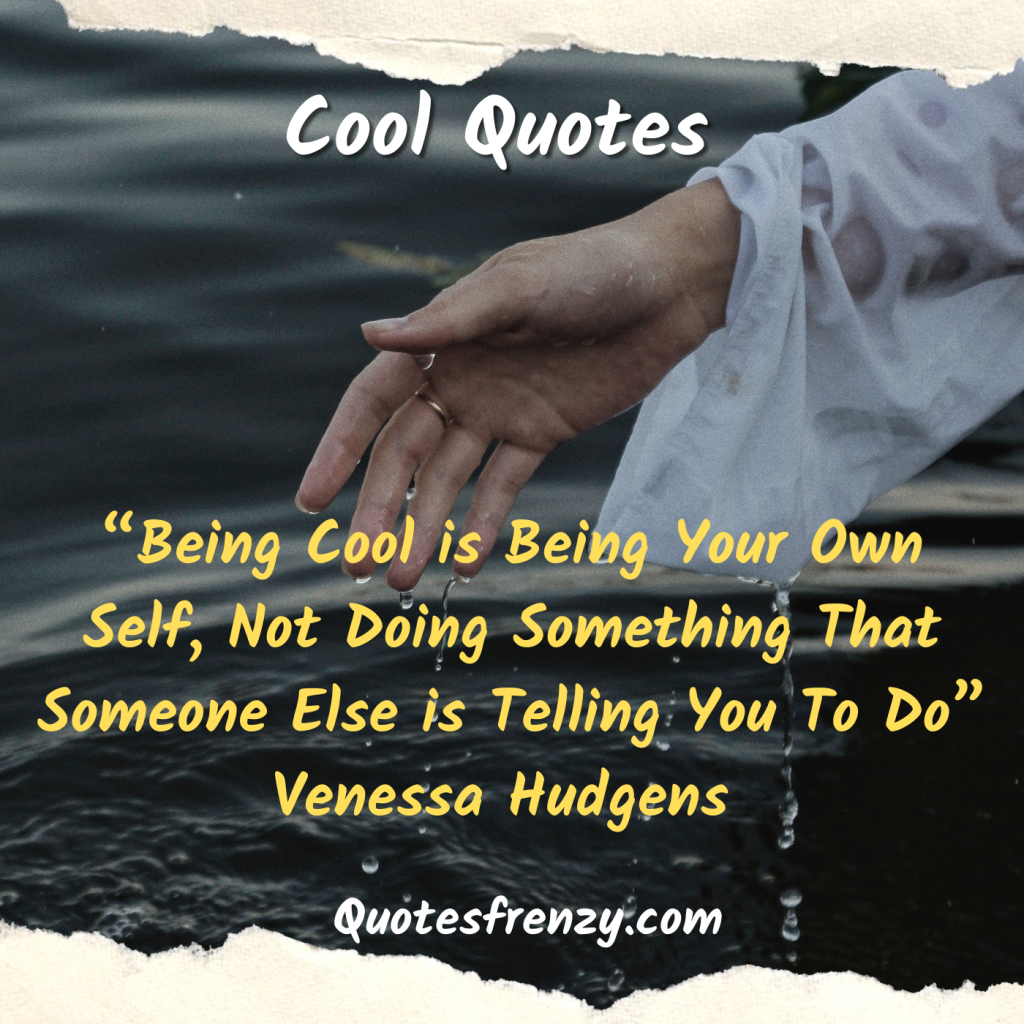 Venessa Hudgens vividly describe the meaning of being cool. One becomes cool when they lead their own life in their own style without copying some other person whom they think is cool. Every person has own way of being cool, it only depends on how well the person is unique and different from others. 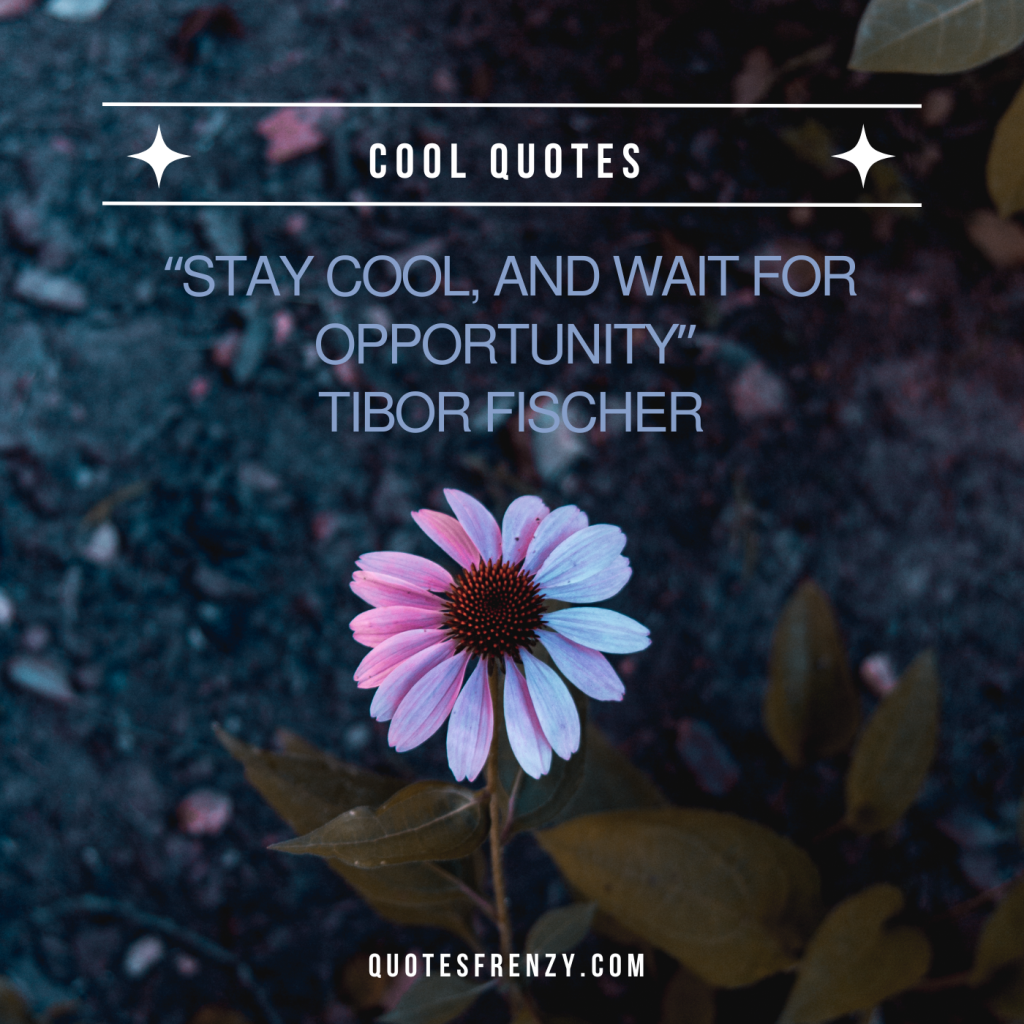 Life Is Short Quotes And Sayings

“Like a welcome summer rain, humor may suddenly cleanse and cool the earth, the air and you.” Langston Hughes

“Being cool is being your own self, not doing something that someone else is telling you to do.” Vanessa Hudgens

“Keep a cool head and maintain a low profile. Never take the lead – but aim to do something big.” Deng Xiaoping

“It’s cool to be different and just be who you are and shock people in a good way.” Brendon Urie

“Nothing is cooler and more attractive than a big comeback, and that’ll be me.” Steven Adler 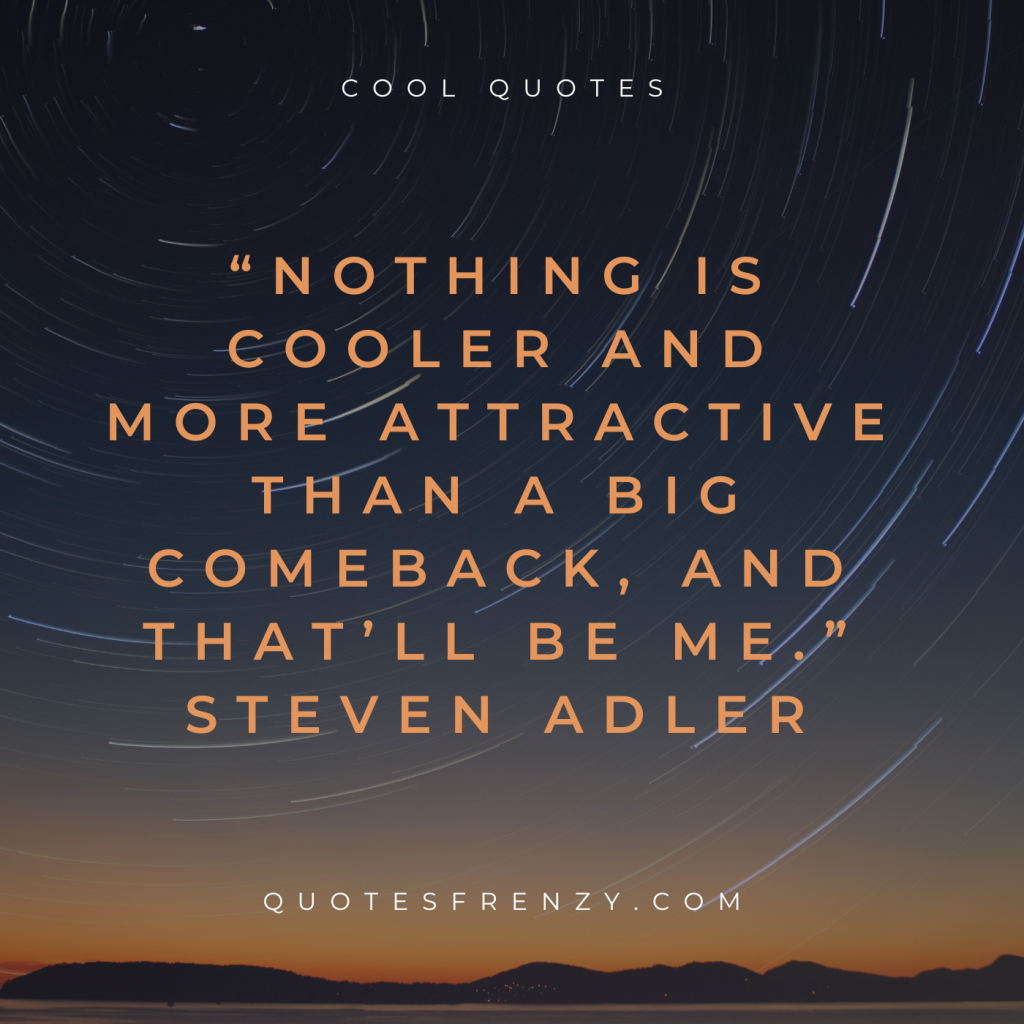 “I’m not the kind of person who tries to be cool or trendy, I’m definitely an individual.” Leonardo DiCaprio

“To create well I have to be in a good mood, happy and cool.” Marc Newson

“Summer is a great time to visit art museums, which offer the refreshing rinse of swimming pools – only instead of cool water, you immerse yourself in art.” Jerry Saltz

“I wear sunglasses almost all the time outside – not because I think I’m really, really cool, but because of the rays.” Ronda Rousey

“My key to dealing with stress is simple: just stay cool and stay focused.” Ashton Eaton 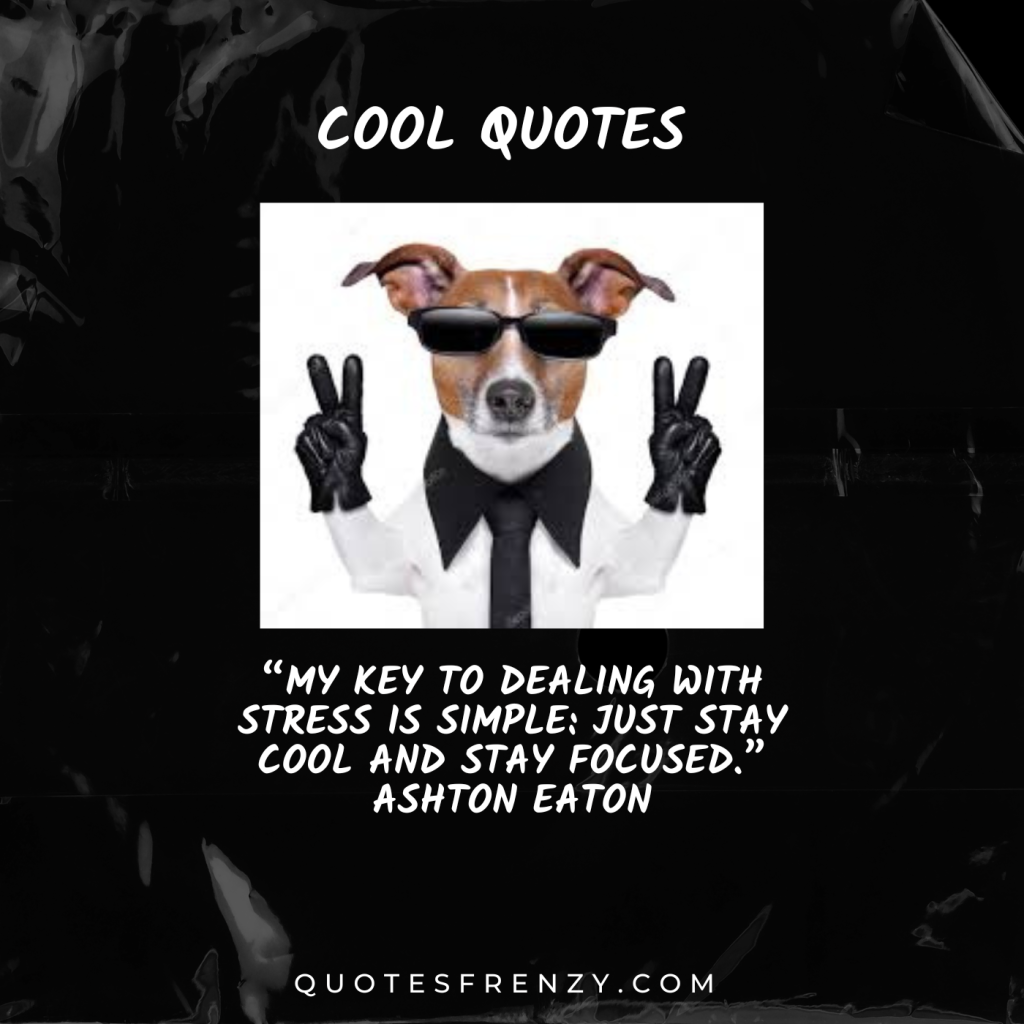 “Be still and cool in thine own mind and spirit.” George Fox

“I think Hammer’s very cool: he has a great voice and great presence.” Brian May

“If he were insane, however, his was a very cool and collected insanity.” Charlotte Bronte

“Being cool is being your own self, not doing something that someone else is telling you to do.” Vanessa Hudgens

“The secret was to just be cool, stay in God’s graces, and work it out.” Solomon Burke

“If you’ve gotta think about being cool, you ain’t cool.” Keith Richards

“Whenever a maker and a thinker get together, really cool stuff happens.” Max McKeown 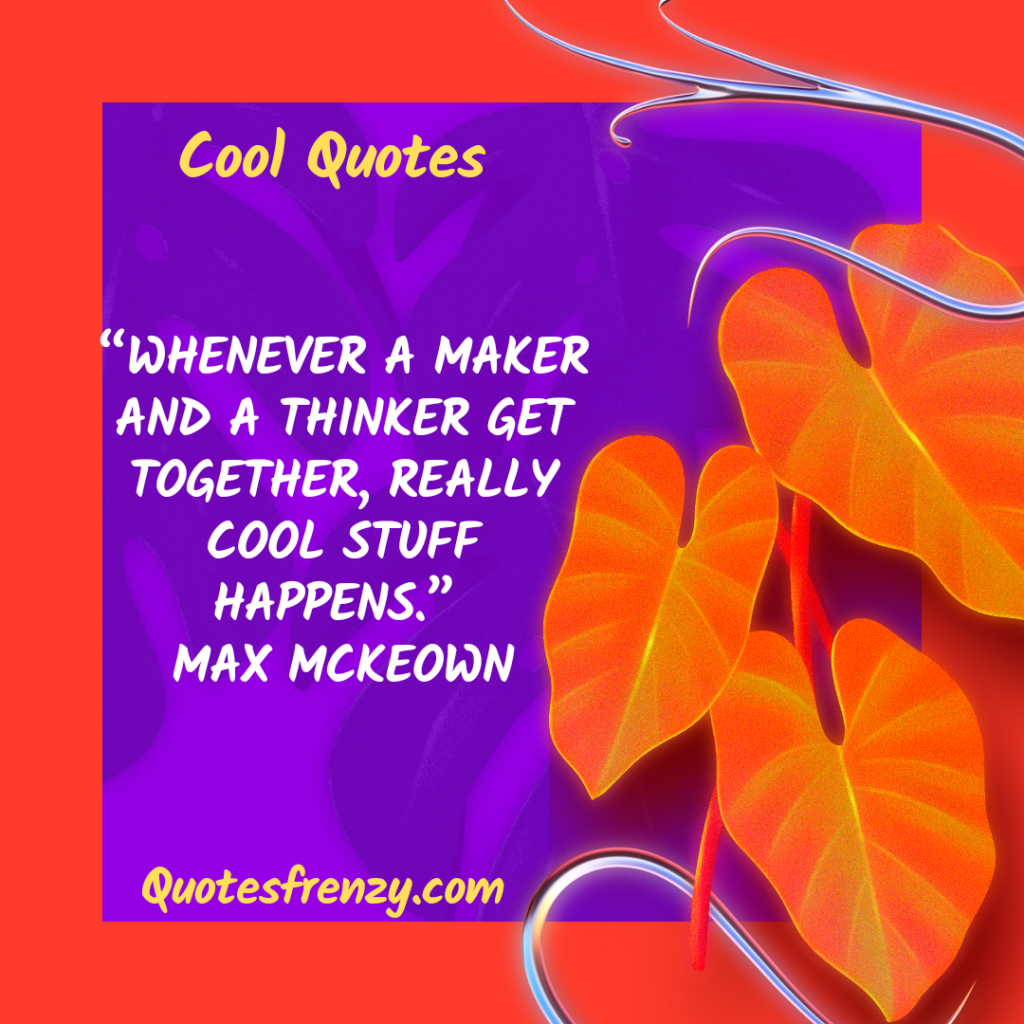 “What people don’t understand is joining a gang ain’t bad, it’s cool, it’s fine. When you in the hood, joining a gang it’s cool because all your friends are in the gang, all your family’s in the gang. We’re not just killing people every night, we’re just hanging out, having a good time.” Snoop Dogg

“I don’t want to be just known for the way I dress. I want to be known for how I play, how I treat people, and how I am as a role model. I don’t just want to be, ‘He dresses cool’ or ‘He dresses crazy.’ You’re going to have lovers and haters. I want my golf game to be the main thing.” Rickie Fowler

“Sometimes you have the trends that’s not that cool. You may have certain artists portraying these trends and don’t really have that lifestyle, and then it gives off the wrong thing. And it becomes kinda corny after awhile. It’s really about keeping hip-hop original and pushing away the corniness in it.” Kendrick Lamar 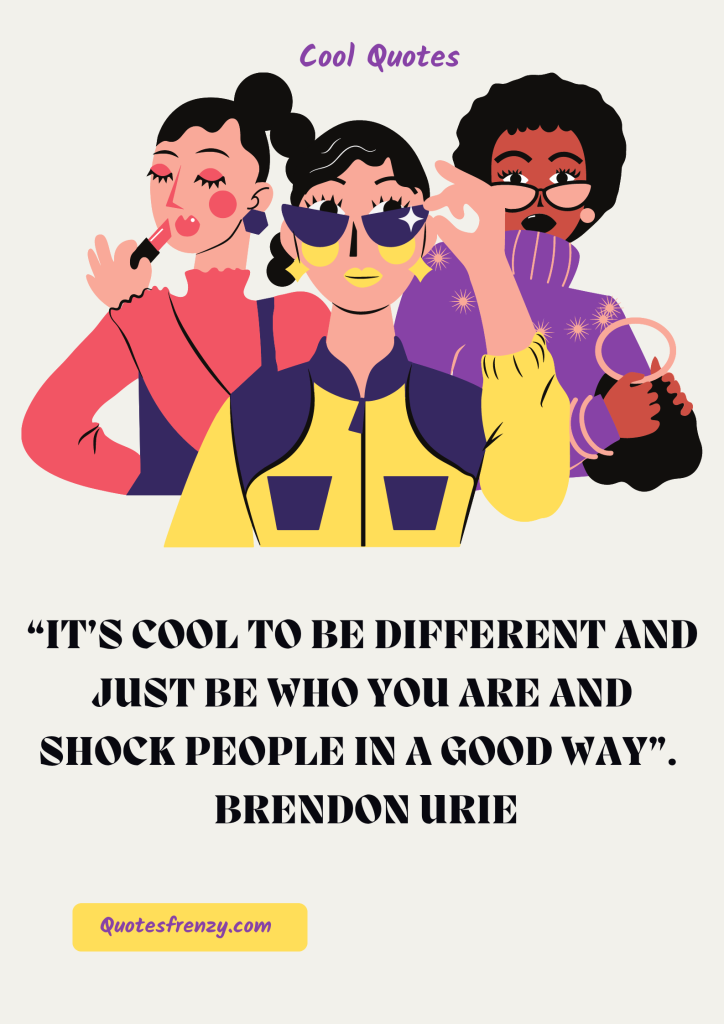 Brendon Urie further unfolds the true meaning of being cool, that is besides being yourself when you do the extraordinary in a good way then you get to be cool. Cool people earn respect from other people, and some will even want to be exactly like them. Cool people always succeed in life this is because they do realize that the path to success is always unique to every person. They say let your actions define who you are, you do not need to show people how you do them but success is what will shock them.

“Keep Cool Head and Maintain a Low Profile. Never Take the Lead but Aim to Do Something Big” Deng Xiaoping – Cool Quotes


Xiaoping enlightens us more on who a cool person is, they do not strive to be ahead of everyone in a path of success but they do aim to do big things without necessarily competing with other people. At instance where a cool person is doing a similar thing to someone else, they do strategize on their path, they do keep a low profile but eventually emerge the best.