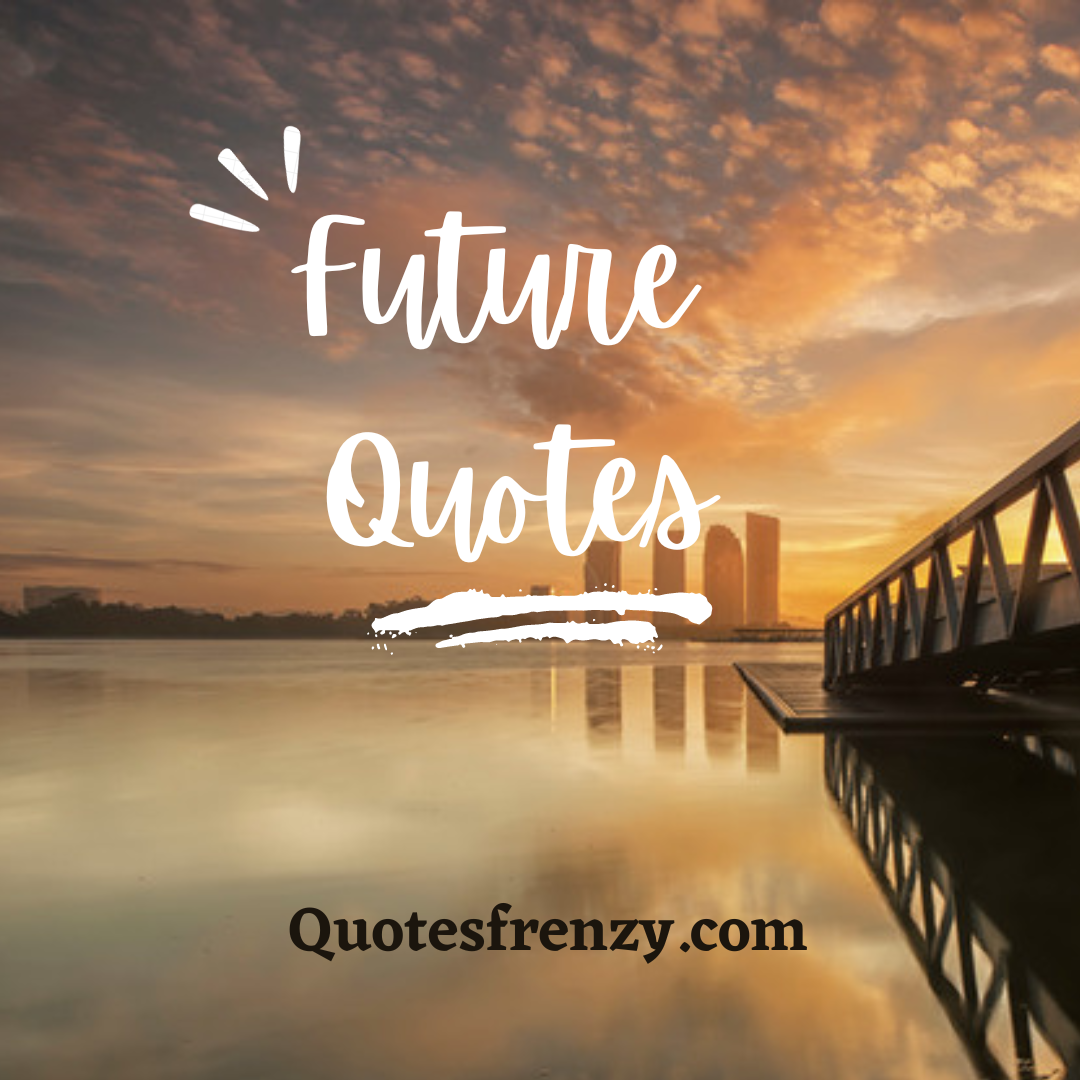 Future Quotes-Worrying about the future is common dilemma of human race. People who remain uncertain about their tomorrow very often suffer anxiety. They even forget the fact that every act in present is going to determine their future. Becoming too much anxious makes them to underperform in today and hence jeopardize their future.

There is no doubt that secret of success lies in looking for an opportunity in every sunrise. Authors and celebrities have said very beautiful things about future. Their quotes can infuse hope in the young generation that wants to know the shape of tomorrow.

Here are the famous quotes about future that turn fears into hopes.

“I never think of the future – it comes soon enough.” Albert Einstein

“The future belongs to those who believe in the beauty of their dreams.” Eleanor Roosevelt 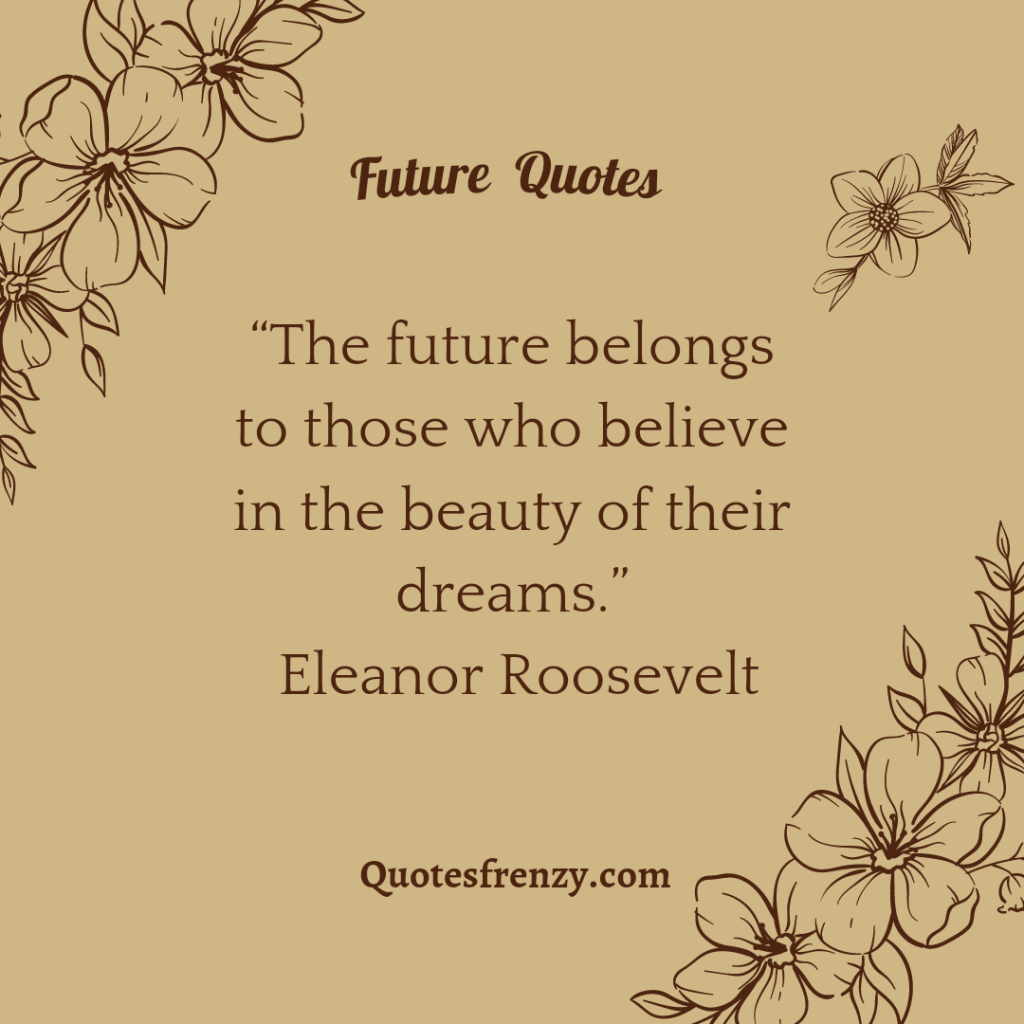 “If you do not think about the future, you cannot have one.” John Galsworthy

“The most reliable way to predict the future is to create it.” Abraham Lincoln

“The only thing we know about the future is that it will be different.” Peter Drucker

“I don’t know what the future may hold, but I know who holds the future.” Ralph Abernathy

“The future influences the present just as much as the past.” Friedrich Nietzsche 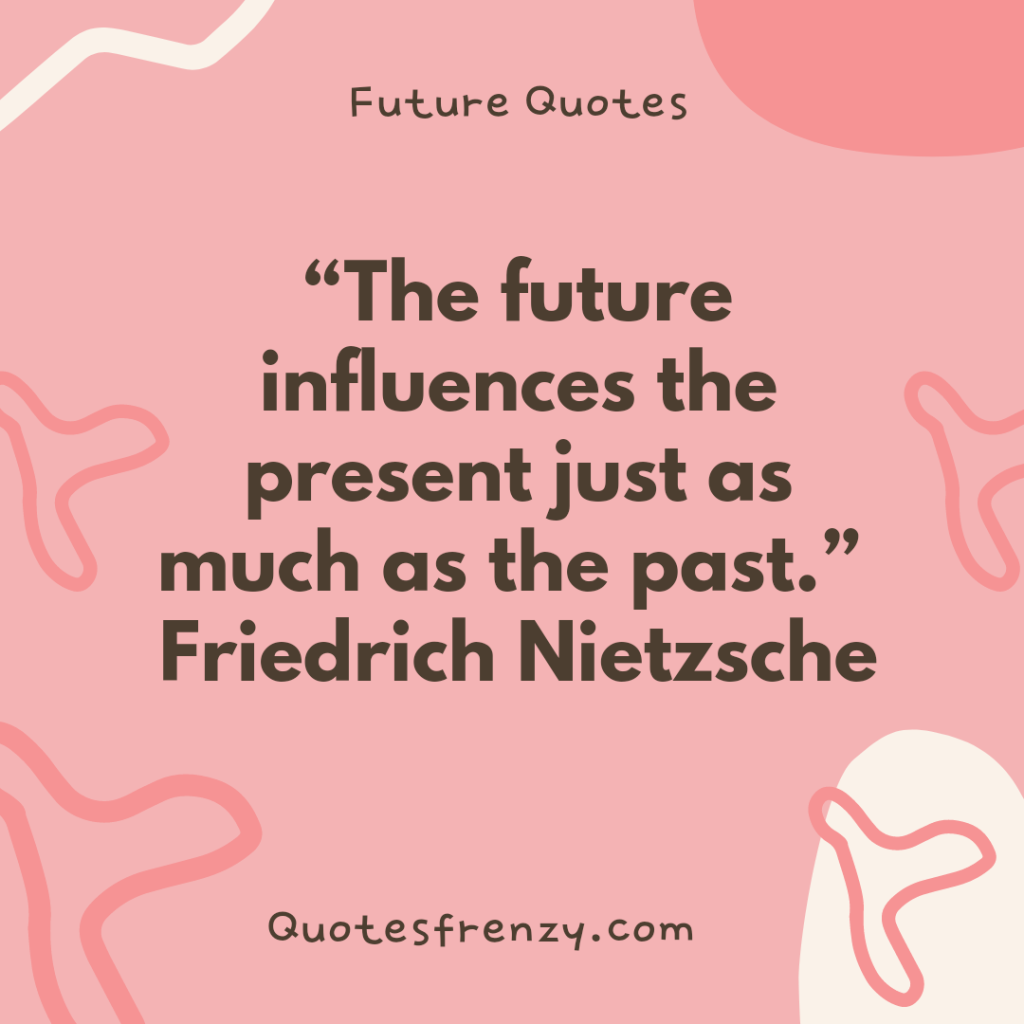 “The past does not equal the future.” Tony Robbins

“The future interests me – I’m going to spend the rest of my life there.” Mark Twain

“Go for it now. The future is promised to no one.” Wayne Dyer

“Real generosity toward the future lies in giving all to the present.” Albert Camus

“We are called to be architects of the future, not its victims.” R. Buckminster Fuller

“The best way to predict the future is to create it.” Peter Drucker 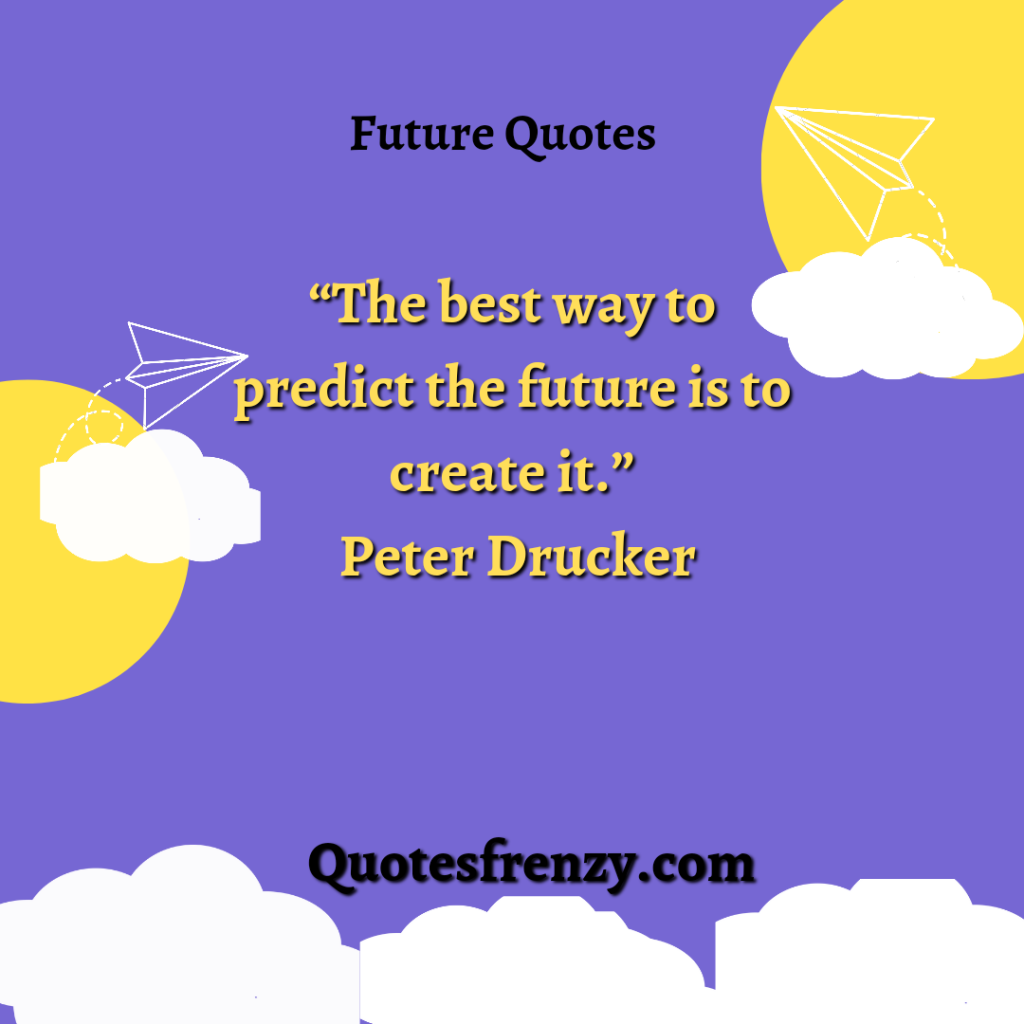 “A happy man is too satisfied with the present to dwell too much on the future.” Albert Einstein

“The present is theirs; the future, for which I really worked, is mine.” Nikola Tesla

“Within the child lies the fate of the future.” Maria Montessori

“The future is not a gift-it is an achievement.” Albert Einstein

“The future is purchased by the present. Samuel Johnson 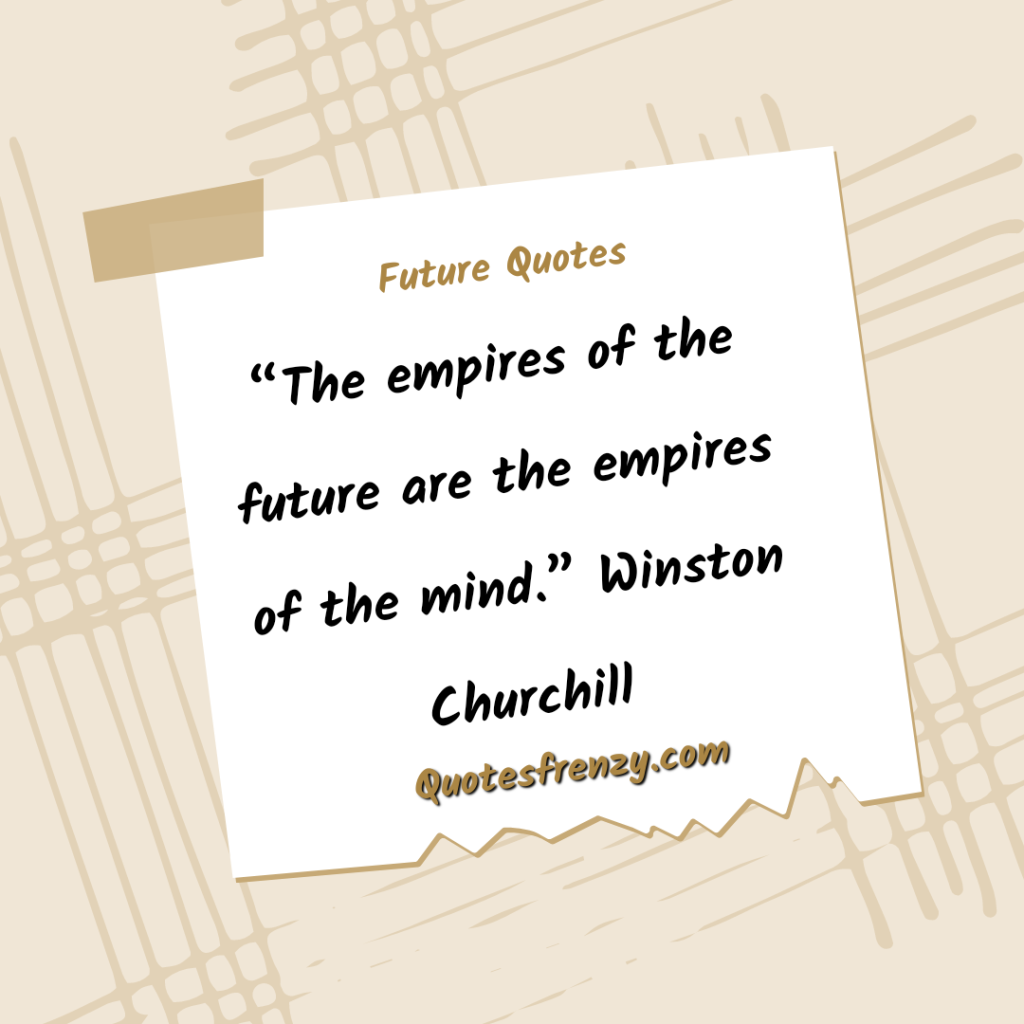 “Life can only be understood backward, but it must be lived forwards.” ― Søren Kierkegaard

“Even if you fall on your face, you’re still moving forward.” – Victor Kiam

“No matter how dirty your past is, your future is still spotless.” – Drake

“The best thing about the future is that it comes one day at a time.” – Abraham Lincoln 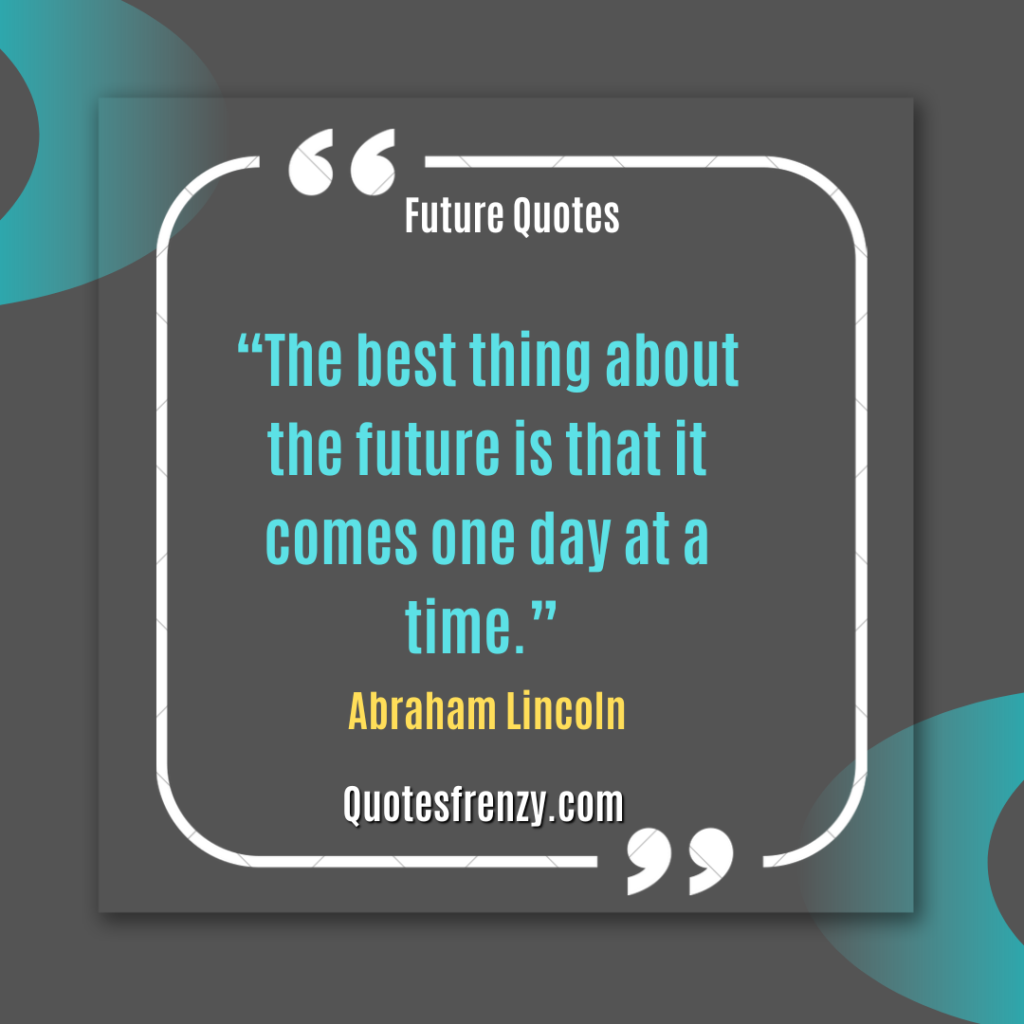 “Always remember that the future comes one day at a time.” – Dean Acheson

“There is nothing like a dream to create the future.” – Victor Hugo

“If we open a quarrel between past and present, we shall find that we have lost the future.” Winston Churchill

“Let the future tell the truth, and evaluate each one according to his work and accomplishments. The present is theirs; the future, for which I have really worked, is mine.” – Nikola Tesla

“If we could unfold the future, the present would be our greatest care.” – Edward Counsel 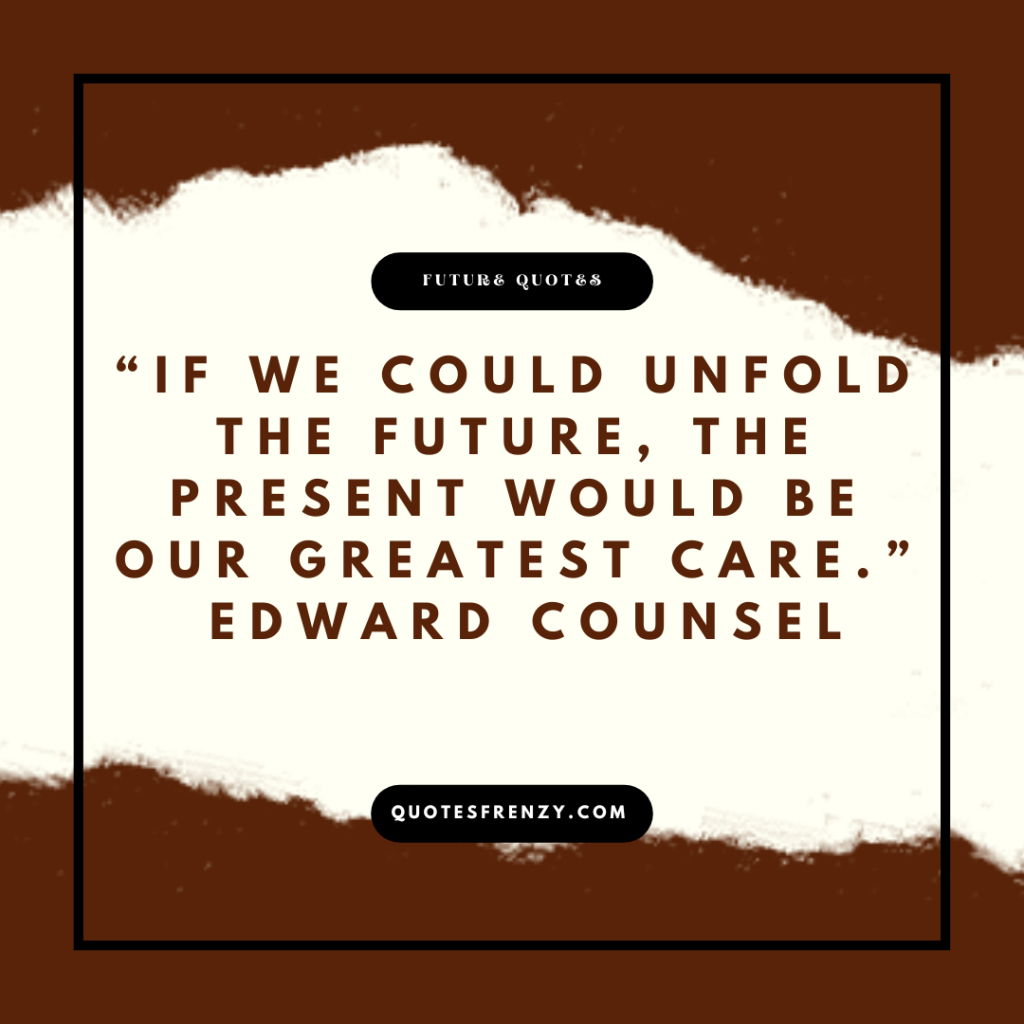 “If there is hope in the future, there is literally power in the present.” – Zig Ziglar

“Go for it now. The future is promised to no one.” – Wayne Dyer 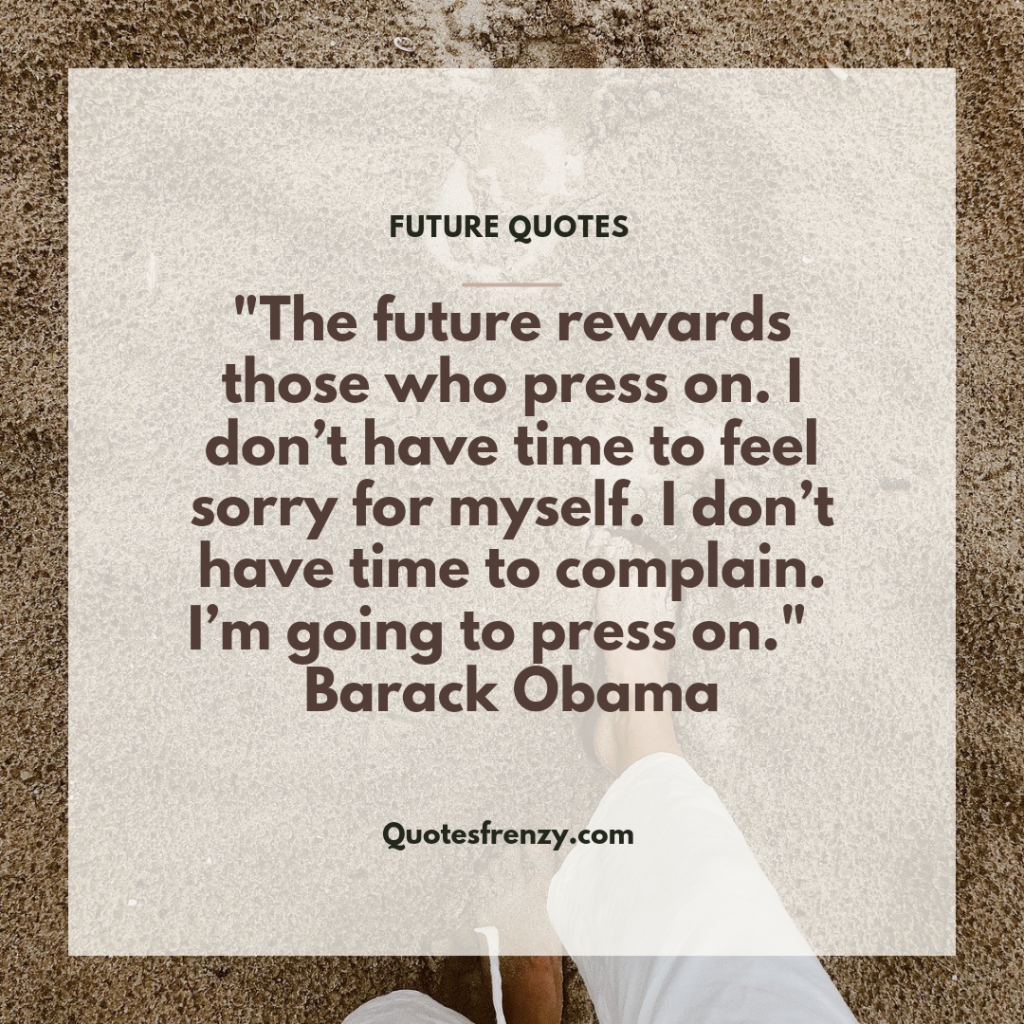 “Education is the passport to the future, for tomorrow belongs to those who prepare for it today. “– Malcolm

“You can’t connect the dots looking forward; you can only connect them looking backward. So you have to trust that the dots will somehow connect in your future.” – Steve Jobs

“The future is there… looking back at us. Trying to make sense of the fiction we will have become.” ― William Gibson 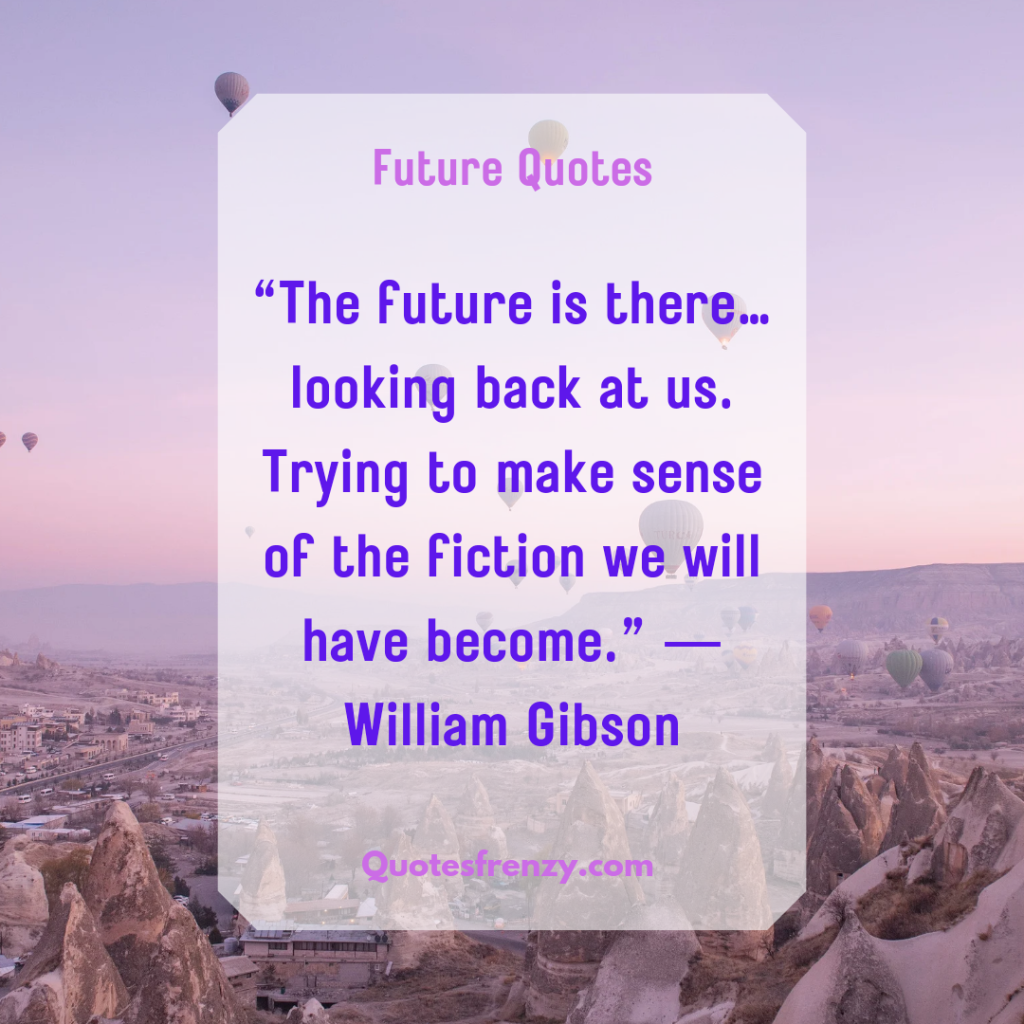 This is such a beautiful quote by Eleanor Roosevelt, wife of the US President, Franklin D. Roosevelt. Eleanor, who is also prominent name in suffragist movement, has remained one of the most eminent First Ladies, America has ever seen. Apart from advocating for the women rights, Roosevelt was also a strong voice in American Civil Rights Movement. Her above mentioned quote is realistic and equally romantic. It prompts readers to dream and believe in dreams for seeing a bright future. 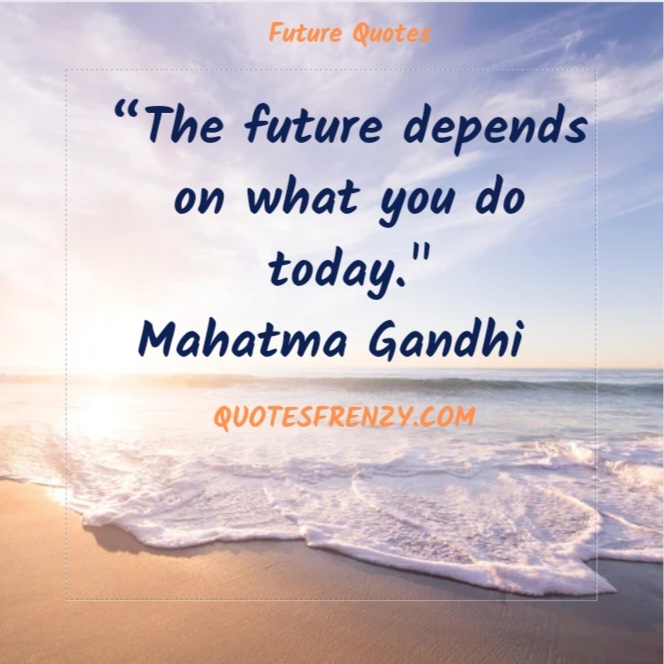 As mentioned in beginning, the distrust in future results in anxiety. The condition simply makes a person dysfunctional. One doesn’t remain able of working efficiently in his present. In reality a person needs to struggle hard in today, in order to achieve a brighter tomorrow. The principle is simple; output depends upon input. Here input is present and output is future.


The quote is an extract from Juan Guare’s play Landscape of the Body. The context of this dialogue, in story can be a bit different, but its application is way much factual. John Guare has beautifully described the power of tomorrow. A next day with all its goodness can simply dilute the effects of all the past days. As long as a person is available with tomorrows, he should not be worried about a bad past.

In all the quotes future comes as hero, because it is a blessing that person is yet to receive.