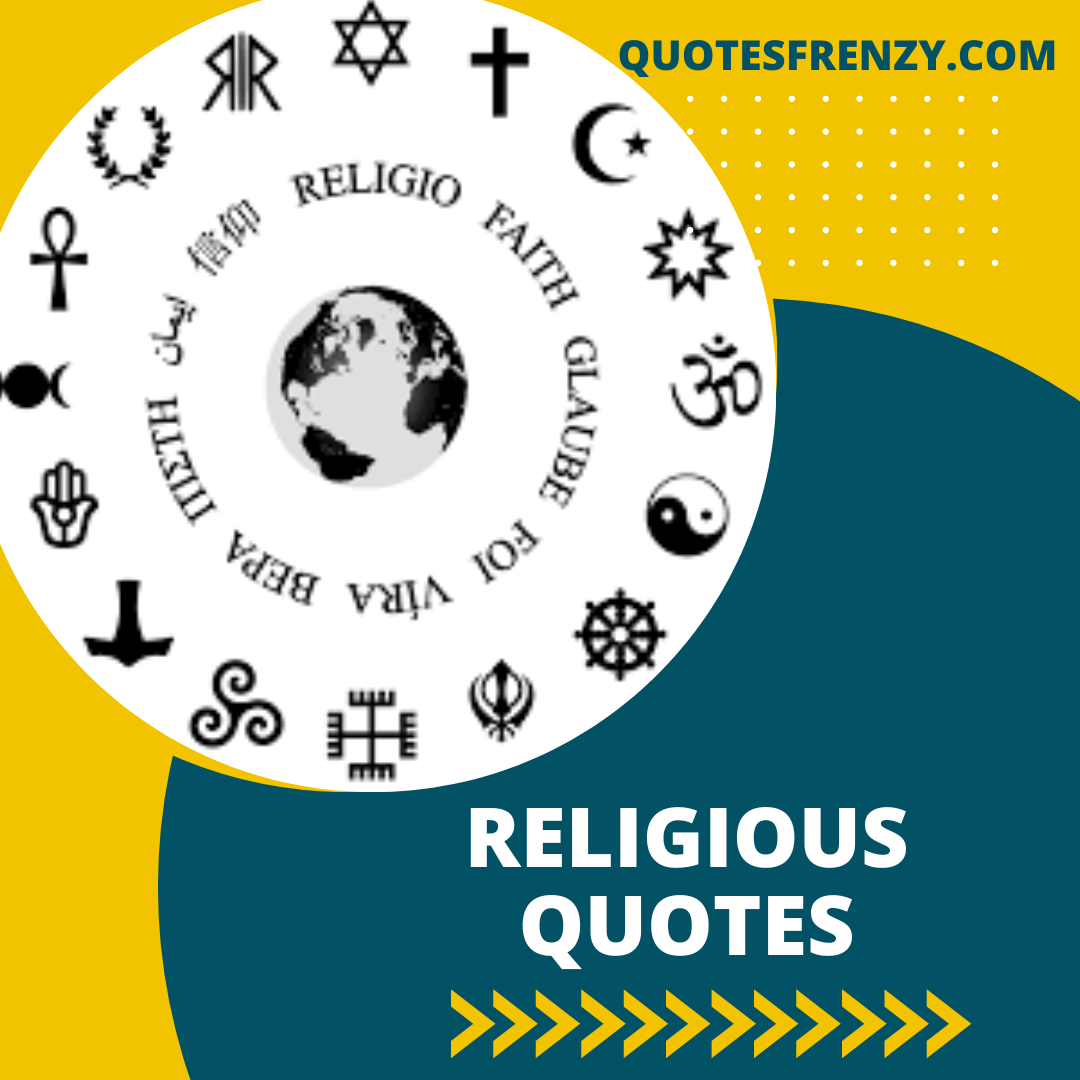 Religious Quotes-Religion has been described as a belief. Some people believe in religion some do not. Those with a religion believe in the existence of a superior spiritual being. The spiritual being is termed by most different religion as God. God is righteous, loving and just. Many Religious Quotes have been used to promote or demystify religion. Where do you stand? These carefully selected quotes will strengthen your belief or guide you in making the right choice. 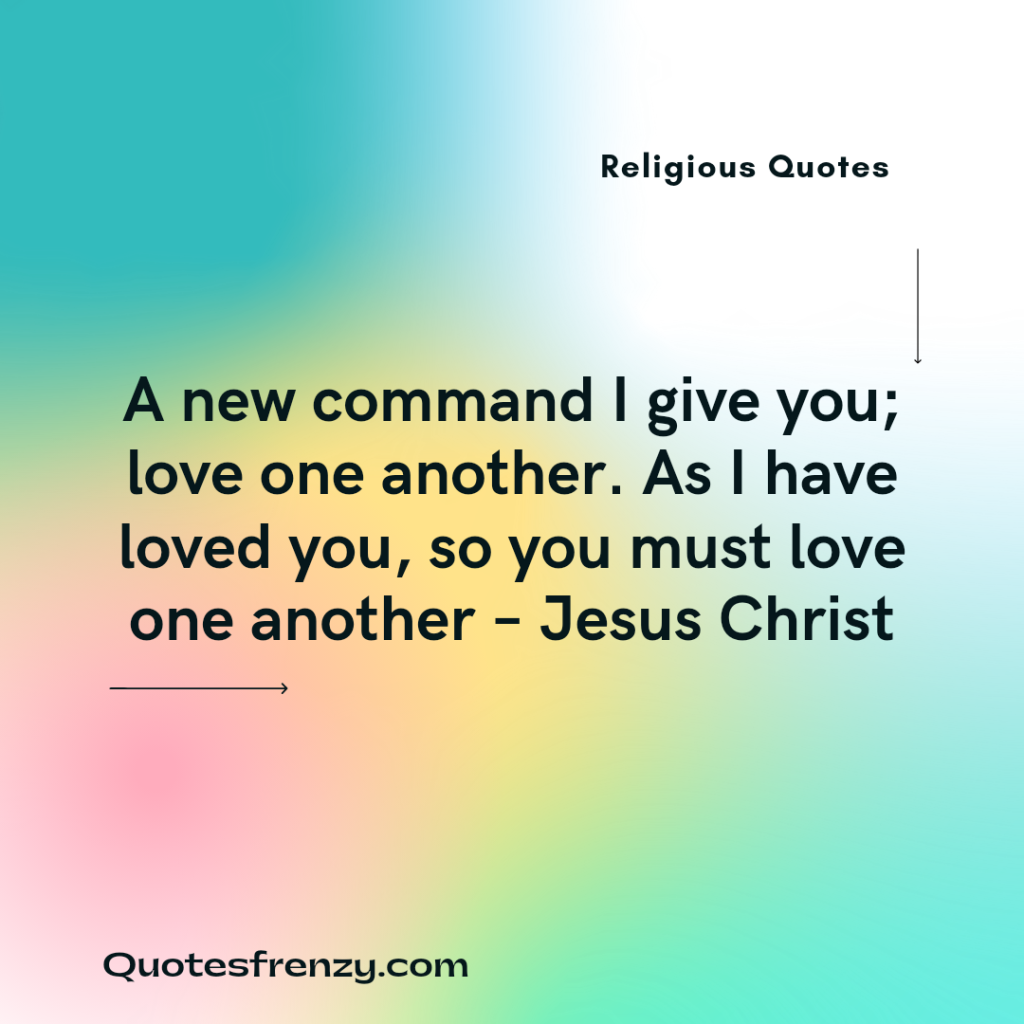 The Foundation of Christianity is Jesus Christ. This quote gives us one of the most famous words of Jesus Christ. Christianity is therefore founded by Love. Most religions are.  Religion teaches us that we should love one another just as ourselves. However, is this reality? Over 80% of the world population ARE religious; Muslim, Christian, Hindu, and Buddhist name it. But is there this much love within us for each other? 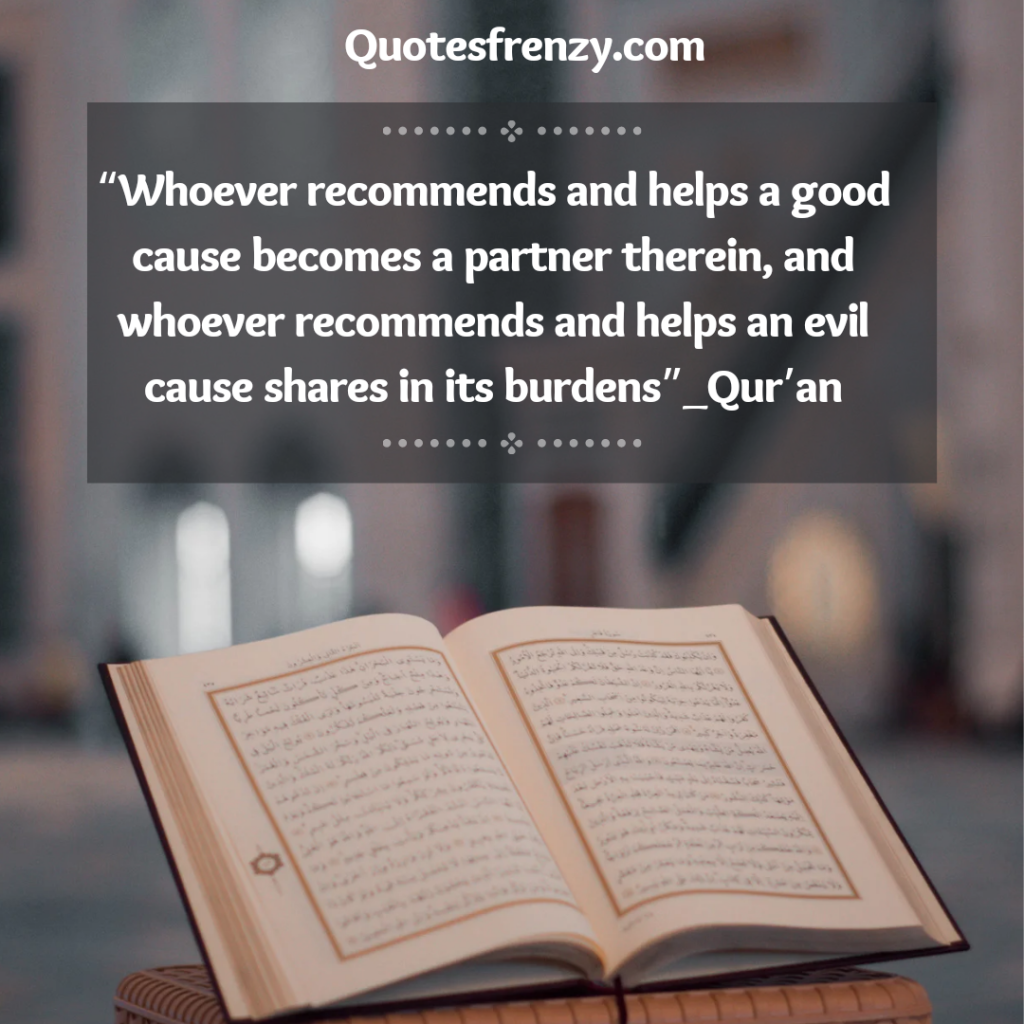 “Calmness, gentleness, silence, self-restraint, and purity: these are the disciplines of the mind.” – Bhagavad Gita

“Religious faith is the one species of human ignorance that will not admit of even the possibility of correction.” Sam Harris 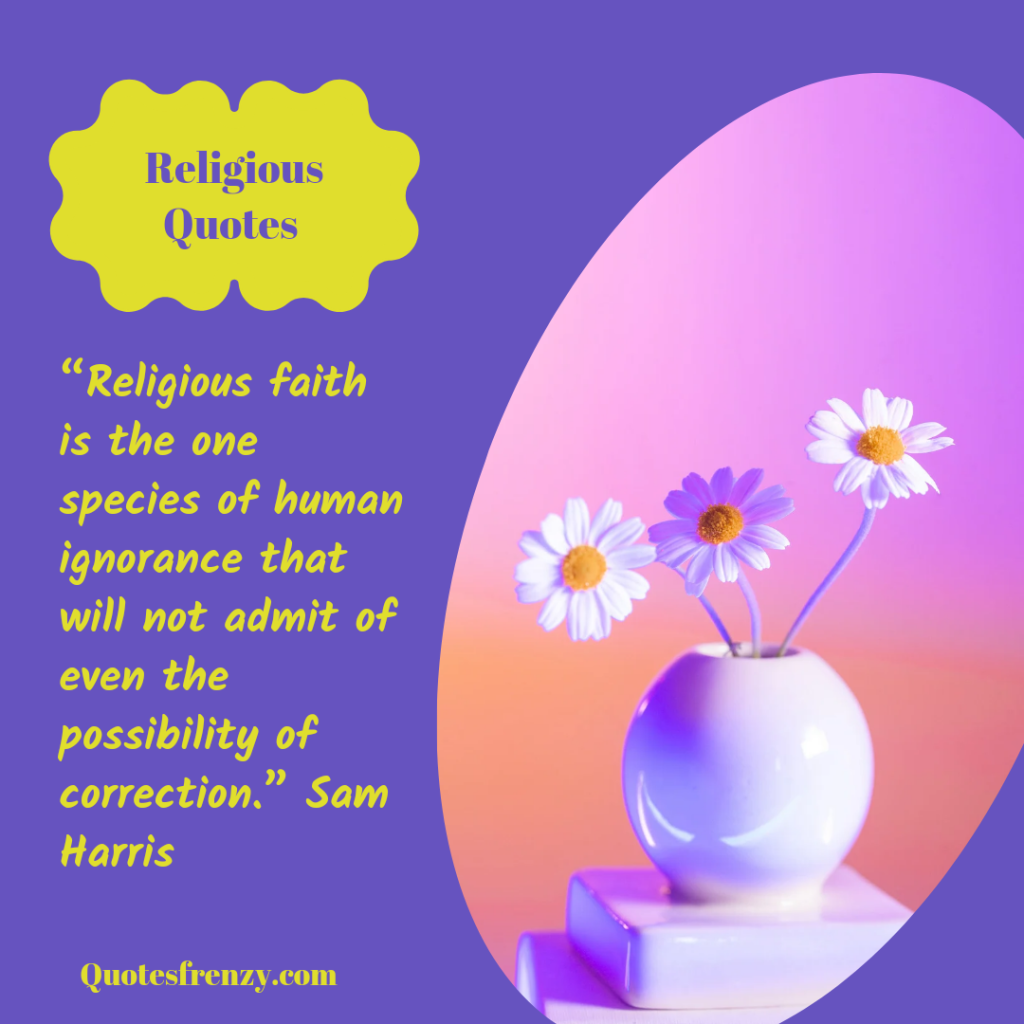 “Religious belief is without reason and without dignity, and its record is near-universally dreadful.” Martin Amis

“Religious conflict can be the bloodiest and cruelest conflicts that turn people into fanatics.” William J. Brennan 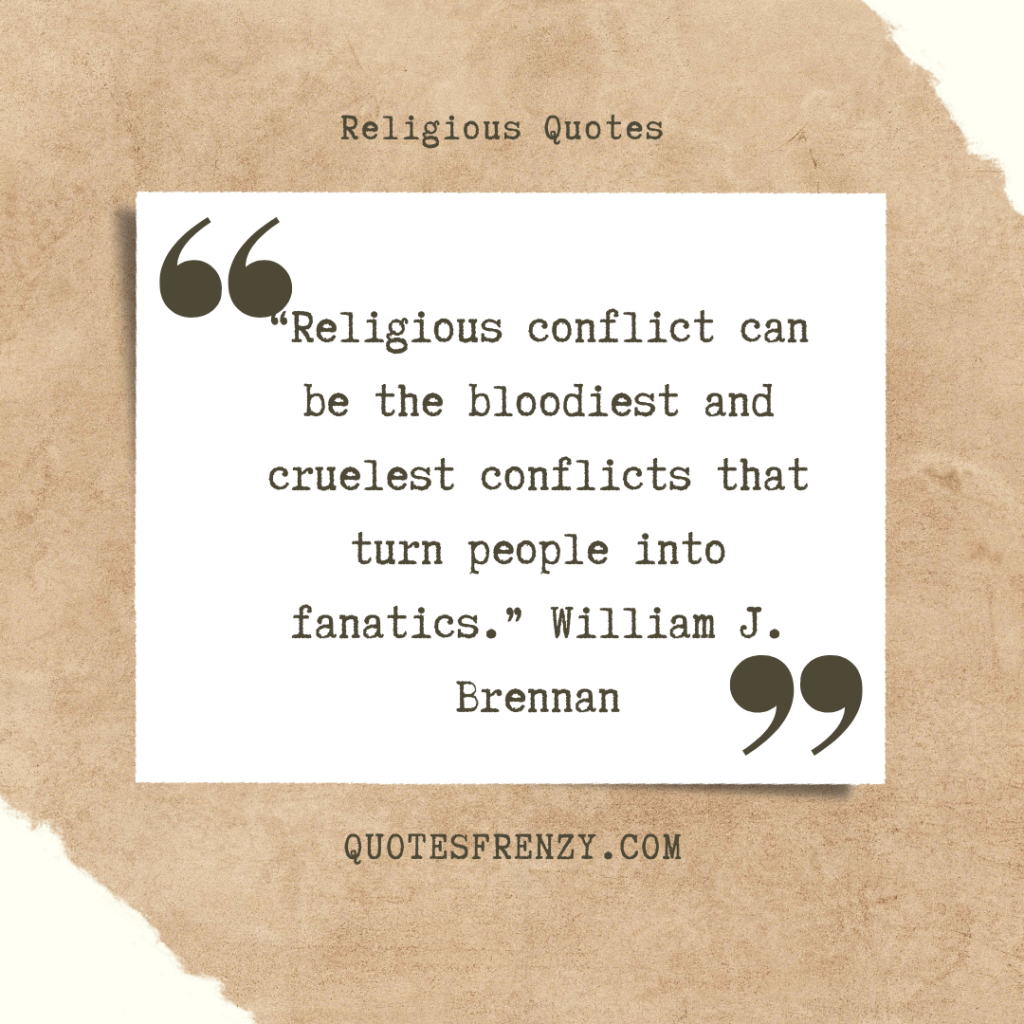 “Religious freedom does not mean freedom from religion.” Rick Perry

“Science without religion is lame, religion without science is blind.” Albert Einstein

“Religious people are atheists about all other gods, atheists only take it one god further.” Richard Dawkins

“Proofs are the last thing looked for by a truly religious mind which feels the imaginary fitness of its faith.” George Santayana

Nothing can be more contrary to religion and the clergy than reason and common sense. – Francois Marie Arouet

“Religious bondage shackles and debilitates the mind and unfits it for every noble enterprise, every expanded prospect.” James Madison

“Religions are all alike- founded upon fables and mythologies.” Thomas Jefferson 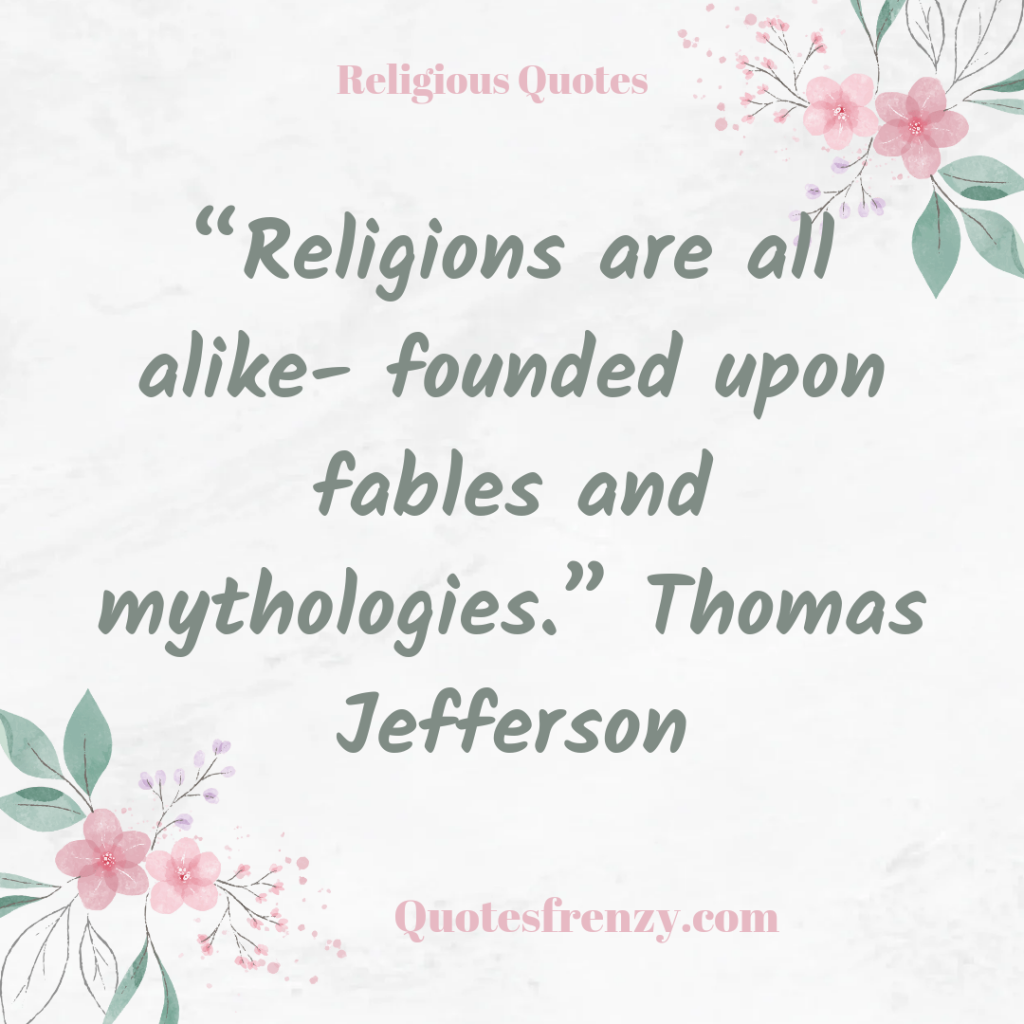 “To be religious is to have one’s attention fixed on God and on one’s neighbour in relation to God.” C. S. Lewis

“Posterity for the philosopher is what the other world is for the religious man.” Denis Diderot

“Religious moderation is the product of secular knowledge and scriptural ignorance.” Sam Harris

“All my religious beliefs are based on Star Wars.” Mike Dirnt

It is only when men begin to worship that they begin to grow. – Calvin Coolidge

“I desire no honour if I have to conceal my religious beliefs in order to have it.” Mahatma Gandhi

“My religious beliefs teach me to feel as safe in battle as in bed.” Stonewall Jackson 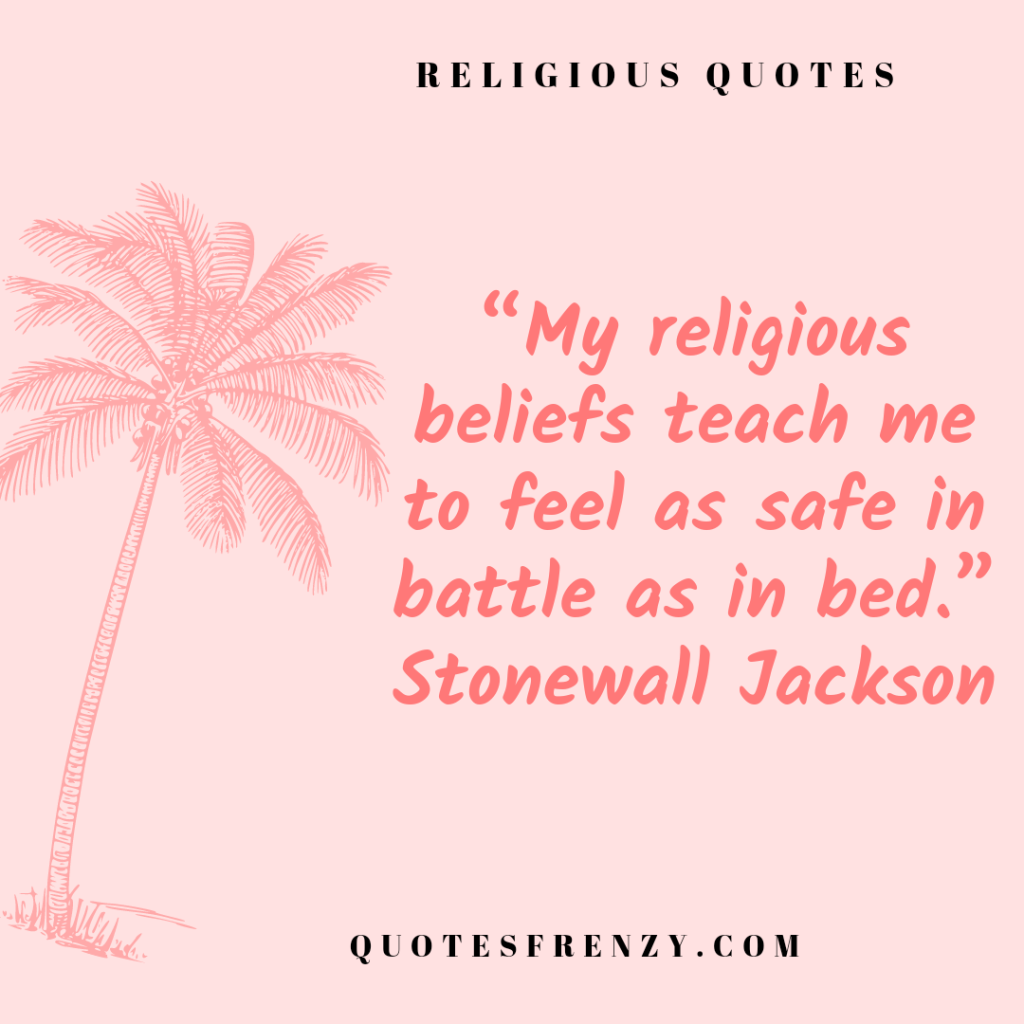 “We reject all efforts to denigrate the religious beliefs of others.” Barack Obama

The greatest religion is to be true to your own nature. Have faith in yourselves. – Swami Vivekananda

“A religious life is a struggle and not a hymn.” Madame de Stael

“Heaven is not to be looked upon only as the reward, but the natural effect, of a religious life.” Joseph Addison

“A religious person answers to God, not to the elected or non-elected official.” Elie Wiesel

“The meaning of religious truth is hope.” Andrei Tarkovsky

“Religious freedom does not mean freedom from religion.” Rick Perry

“For a religious leader to question a person’s faith is disgraceful.” Donald Trump 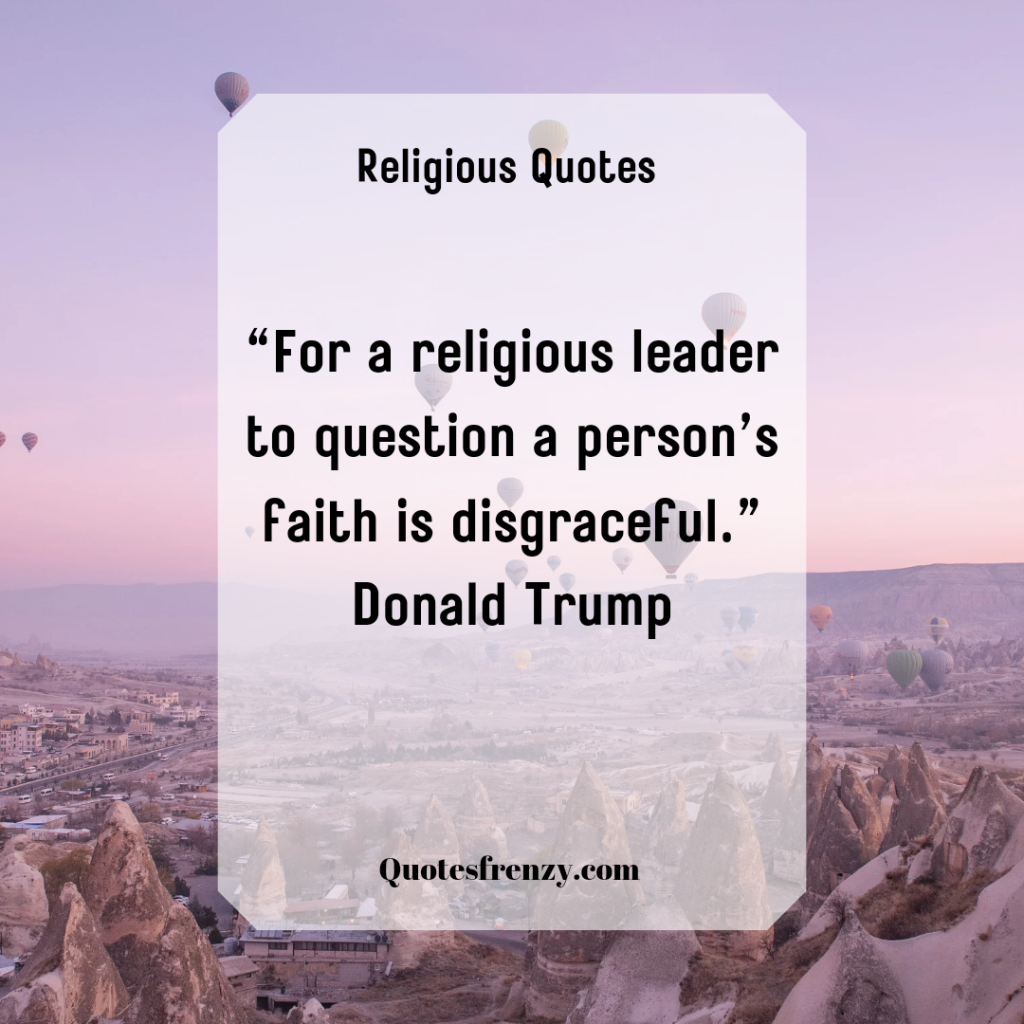 “There is a powerful desire by majorities to assert a religious identity for the country.” Jack Balkin

A religion that gives nothing, costs nothing, and suffers nothing, is worth nothing. – Martin Luther

Just as a candle cannot burn without fire, men cannot live without a spiritual life – Buddha 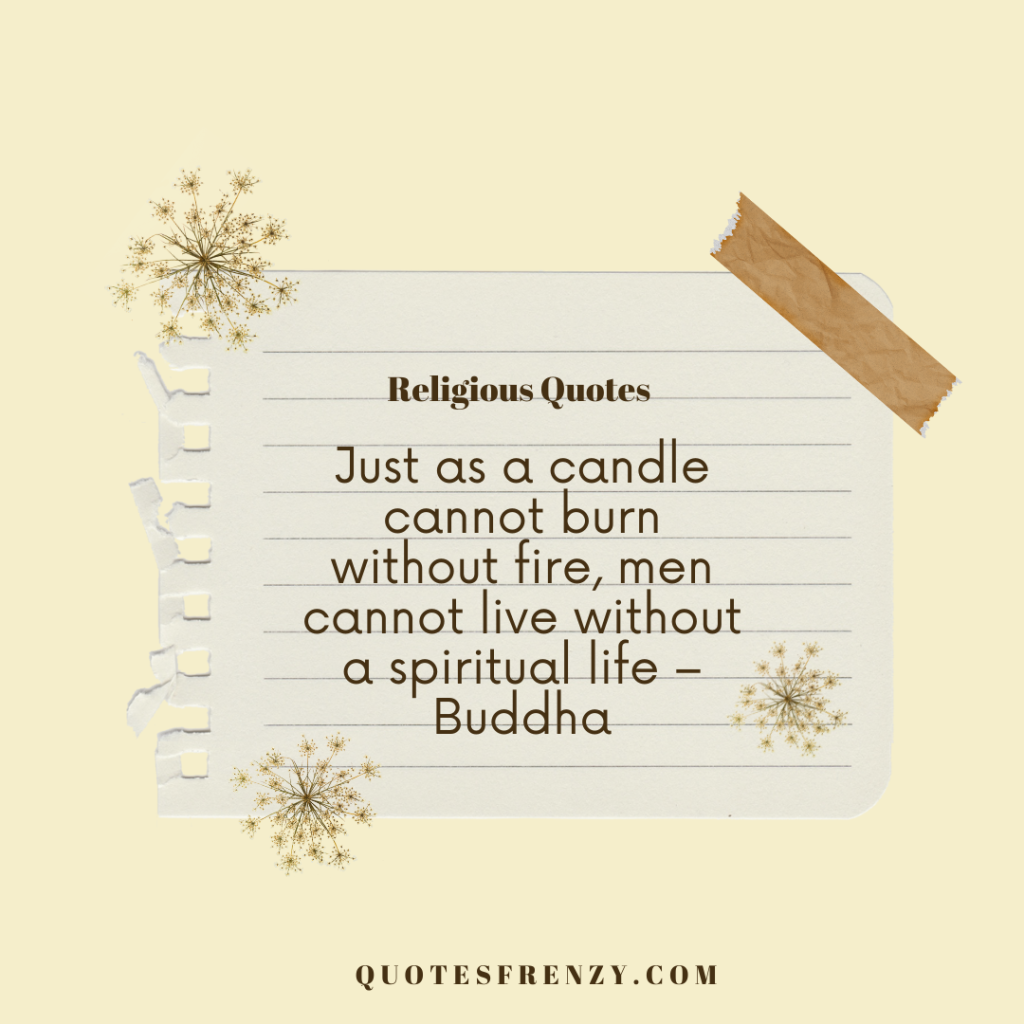 Death is one of the things which man has not been able to overcome or conquer. Humanity is not sure of what lies ahead in life after death. Science does not give a conclusive explanation for life after death. This mystery has made man believe in the spiritual part of him. The truth is that man is not just flesh and blood, but there is a soul in each one of us. The soul is considered the immortal part. According to this Buddha’s quote, living life without acknowledging our spiritual being (the soul) is vanity.

I like the religion that teaches liberty, equality, and fraternity – A.R  Ambedkar

All the religions on earth have some kind of guide. Christians have the Bible while Muslims have the Koran. Each religion has different types of teaching, but are founded on love of God to man. Ambedkar, in the above quote, gives his opinion on the religion he prefers, one that has liberty fraternity and not limited by equality.  The bottom line is a religion should bring us together, however diverse we may be.

These Religious Quotes are some of the best you will ever come across. They are true to their own cause and do not instruct violence in any way. Be true to yourself, be guided into the truth and stick to it. Remember love is the foundation of all religions.