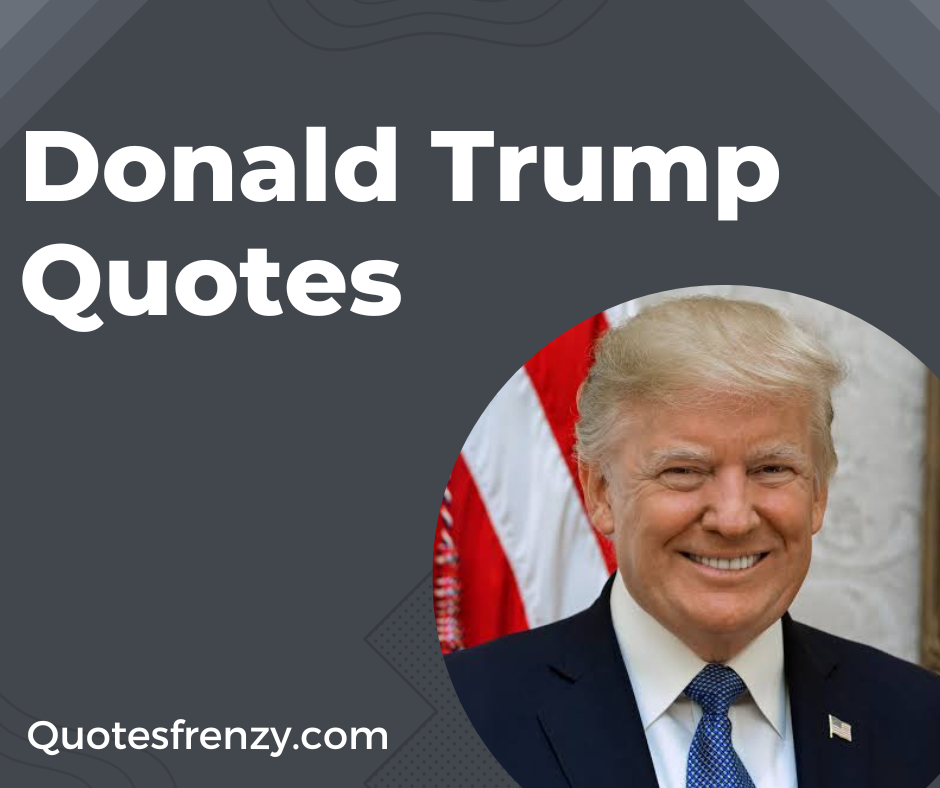 Donald John Trump is the 45th President of the USA, who took over the office since January 20, 2017. He is also an American businessman, television personality and author.

Being one of the richest guys in the globe, his quotes are worthwhile. If you are looking for a way to achieve your dreams in a negative world, follow these best Donald Trump Quotes and understand how to build an empire.

“Without passion you don’t have energy, with out energy you have nothing.” 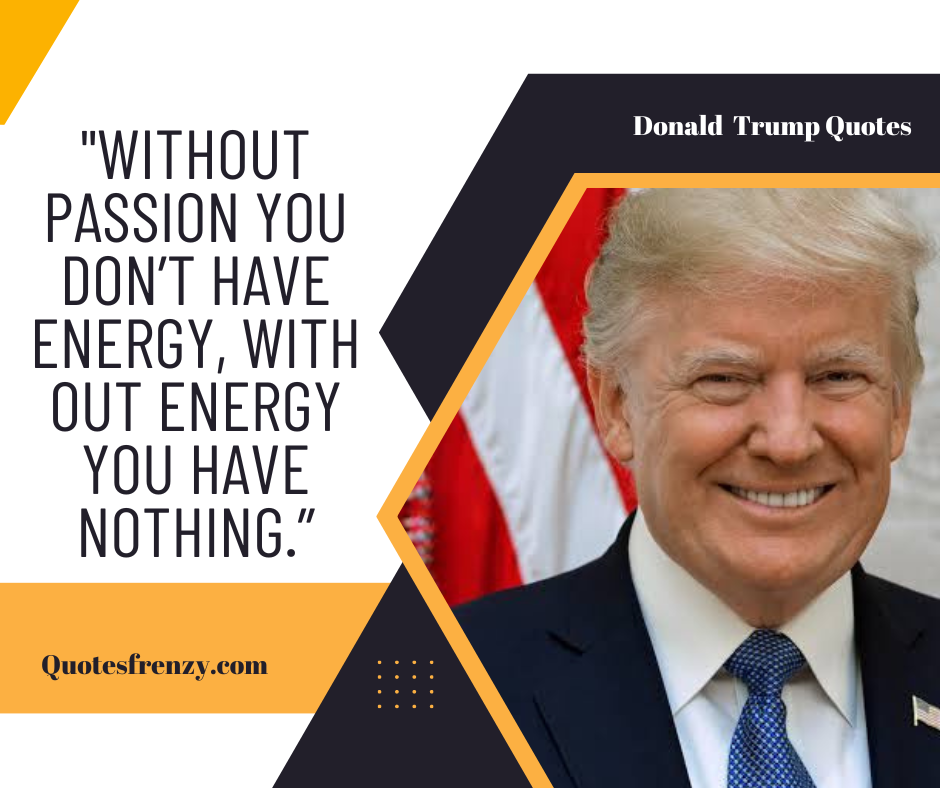 “I feel a lot of people listen to what I have to say.”

“My whole life has been heat. I like heat, in a certain way.”

“We – we need strength, we need energy, we need quickness and we need brain in this country to turn it around.”

“If you’re interested in ‘balancing’ work and pleasure, stop trying to balance them. Instead make your work more pleasurable.”

“I apologize when I’m wrong.”

“You are somewhat more traditional politicians (than me).”

“We need a great president.”

“Sometimes by losing a battle you find a new way to win the war.” 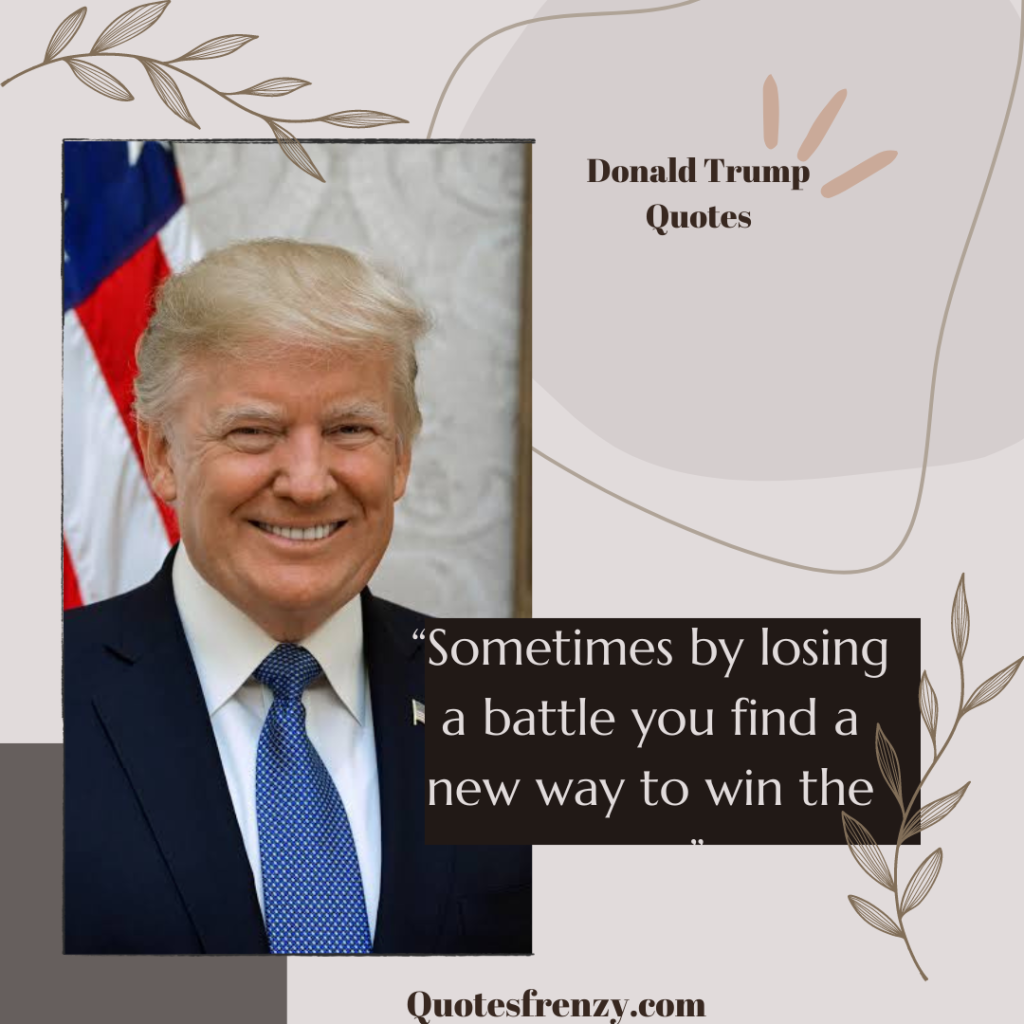 “No dream is too big. No challenge is too great. Nothing we want for our future is beyond our reach.”

“My whole life is about winning. I don’t lose often. I almost never lose.”

“As long as you’re going to be thinking anyway, think big.”

“The country is doing well in so many ways. But there’s such divisiveness.”

“We have the worst laws.”

“I’m competitive, and I love to create challenges for myself. Maybe that’s not always a good thing. It can make life complicated.”

“I always want to think of myself as an underdog.”

“I will fight for you with every breath in my body – and I will never, ever let you down.”

“I’ve always won, and I’m going to continue to win. And that’s the way it is.” 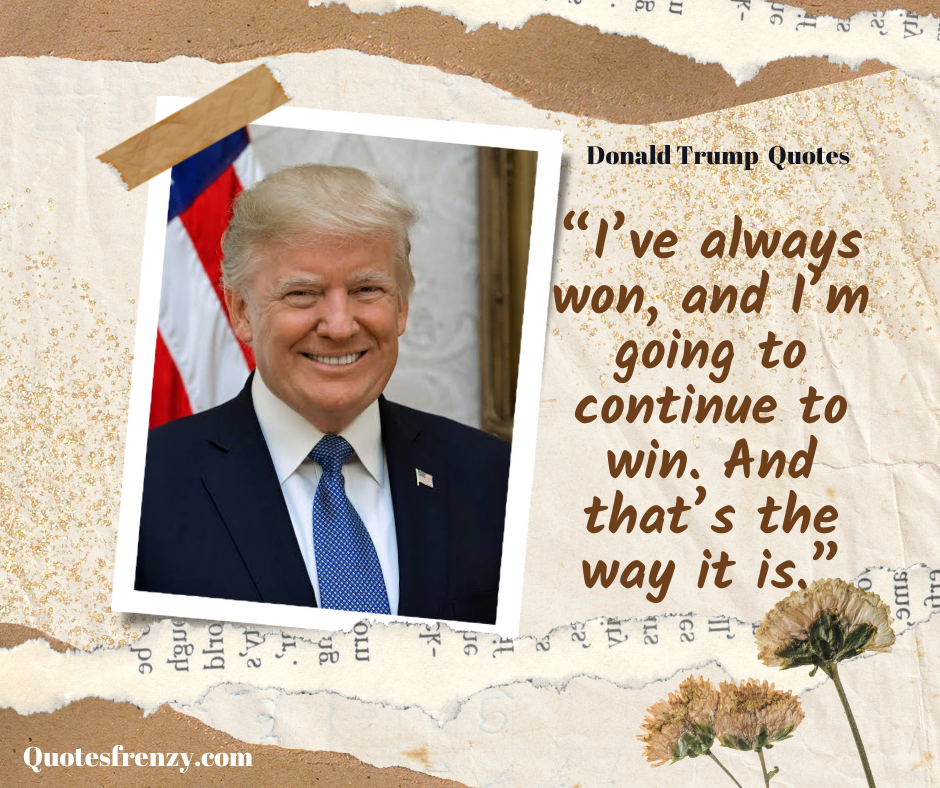 “You go to the hospital. You have a broken arm. You come out, you are a drug addict with this crap.”

“I think my positions are going to be what the people in this room come up with.”

“You have to think anyway, so why not think big?”

“Remember two things. Number one, I said, we’re going to be saying Christmas again. And, number two, I said I was going to give you a Christmas present.”

“It’s always good to be underestimated.”

“When somebody challenges you, fight back. Be brutal, be tough.” 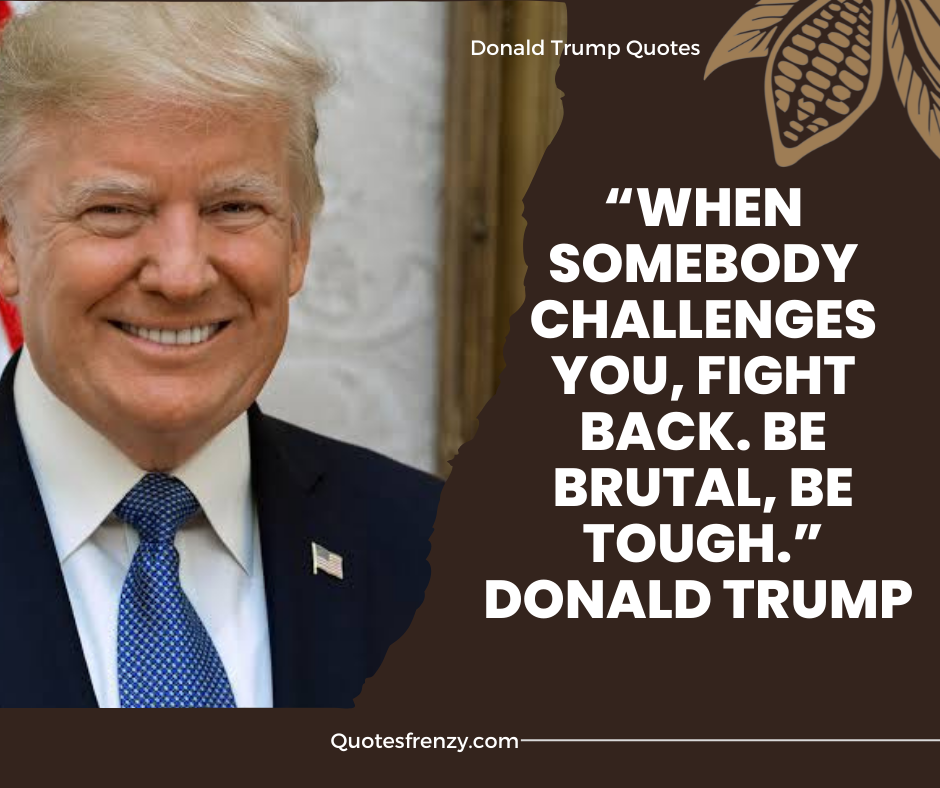 “I’ve always said, ‘If you need Viagra, you’re probably with the wrong girl.”

“I have a great relationship with the Mexican people.”

“When you open your heart to patriotism, there is no room for prejudice. The Bible tells us, ‘How good and pleasant it is when God’s people live together in unity.”

“We share one heart, one home, and one glorious destiny.”

“We must speak our minds openly, debate our disagreements honestly, but always pursue solidarity.”

“People love me. And you know what, I have been very successful. Everybody loves me.”

“The problems we face now – poverty and violence at home, war and destruction abroad – will last only as long as we continue relying on the same politicians who created them in the first place.”

“What separates the winners from the losers is how a person reacts to each new twist of fate.”

“Money was never a big motivation for me, except as a way to keep score. The real excitement is playing the game.”

“Sometimes you need conflict in order to come up with a solution. Through weakness, oftentimes, you can’t make the right sort of settlement, so I’m aggressive, but I also get things done, and in the end, everybody likes me.”

“I judge people based on their capability, honesty, and merit.” 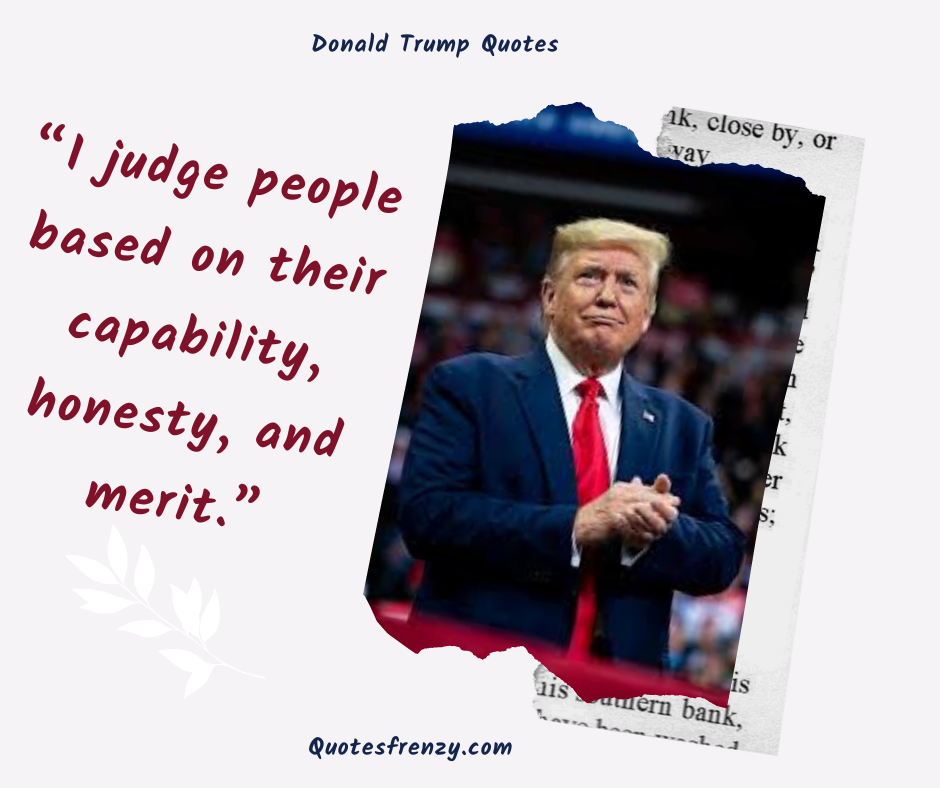 “Part of being a winner is knowing when enough is enough. Sometimes you have to give up the fight and walk away, and move on to something that’s more productive.”

“We’re all fighting battles, but I love fighting these battles.”

“In the end, you’re measured not by how much you undertake but by what you finally accomplish.”

“Anyone who thinks my story is anywhere near over is sadly mistaken.”

“We need a president with tremendous intelligence, smarts, cunning, strength and stamina.”

“The U.S. has become a dumping ground for everybody else’s problems.”

“Everything in life is luck.”

“If you get good ratings, they’ll cover you even if you have nothing to say.” 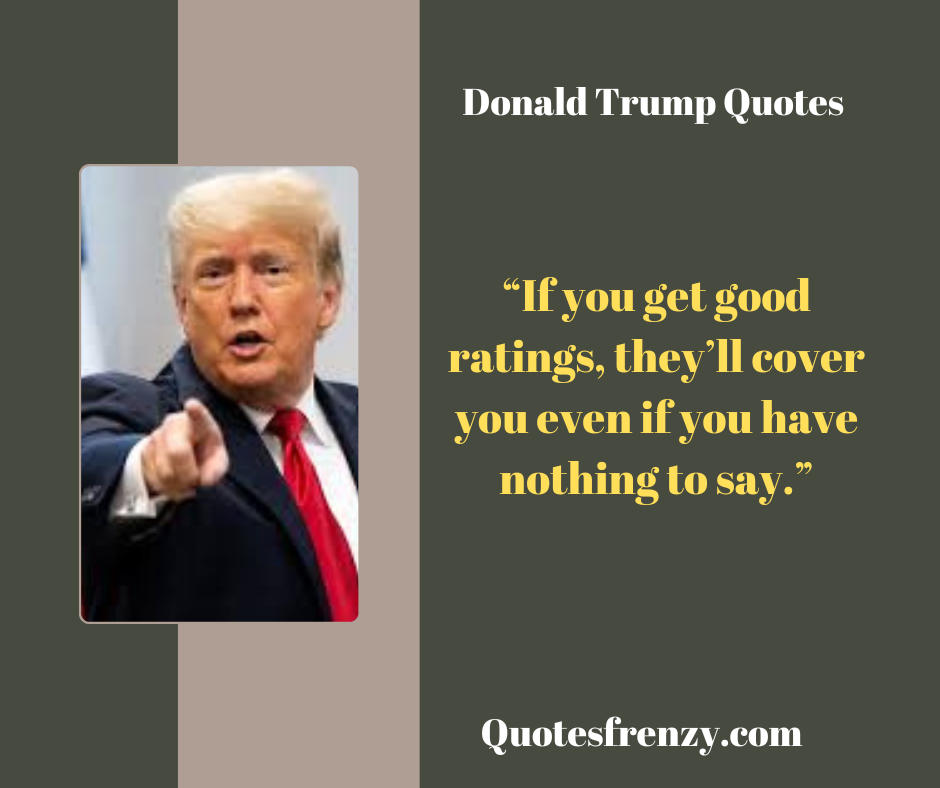 “If people can just pour into the country illegally, you don’t have a country.”

“I try to learn from the past, but I plan for the future by focusing exclusively on the present. That’s where the fun is.”

“Everything I do in life is framed through the view of a businessman. That’s my instinct. If I go into a pharmacy to buy shaving cream, then I’m going to look for the best deal on shaving cream.”

“I was a great student. I was good at everything.”

“I do respect them; I have great respect for women. In fact, one of the reasons ‘The Apprentice’ was such a successful show for so many years, the audience of women was fantastic.”

“I own buildings. I’m a builder; I know how to build. Nobody can build like I can build. Nobody. And the builders in New York will tell you that. I build the best product. And my name helps a lot.”

“Every day, I wake up determined to deliver a better life for the people all across this nation that have been neglected, ignored, and abandoned. I have visited the laid-off factory workers and the communities crushed by our horrible and unfair trade deals. These are the forgotten men and women of our country.”

“First and foremost, I’m a real estate person. And that’s what I love the most.”

“The most basic duty of government is to defend the lives of its own citizens. Any government that fails to do so is a government unworthy to lead.”

“Sometimes your best investments are the ones you don’t make.” 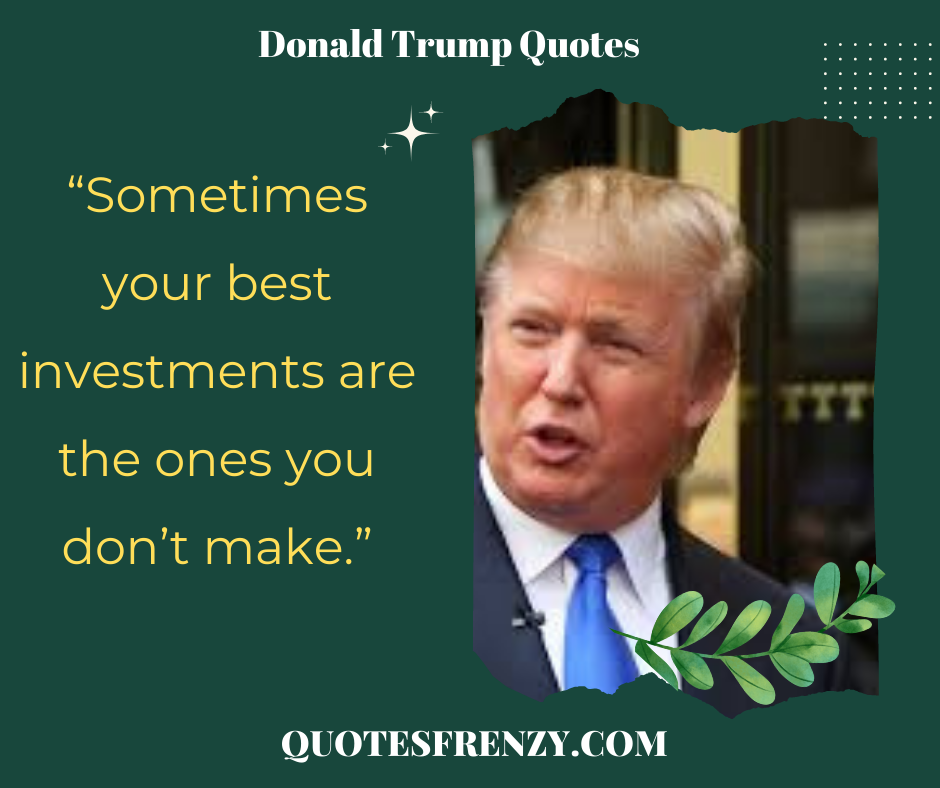 “We can’t let people down when they can’t get any medical care, when they’re sick and don’t have money to go to a doctor. You help them.”

“I always look at it that I work with my employees as opposed to them working for me.”

“I’ve become very successful over the years. I think I own among the greatest properties in the world.”

“Do not let anyone tell you it cannot be done. No challenge can match the heart and fight and spirit of America. We will not fail. Our country will thrive and prosper again.”

“People are tired of seeing politicians as all talk and no action.” 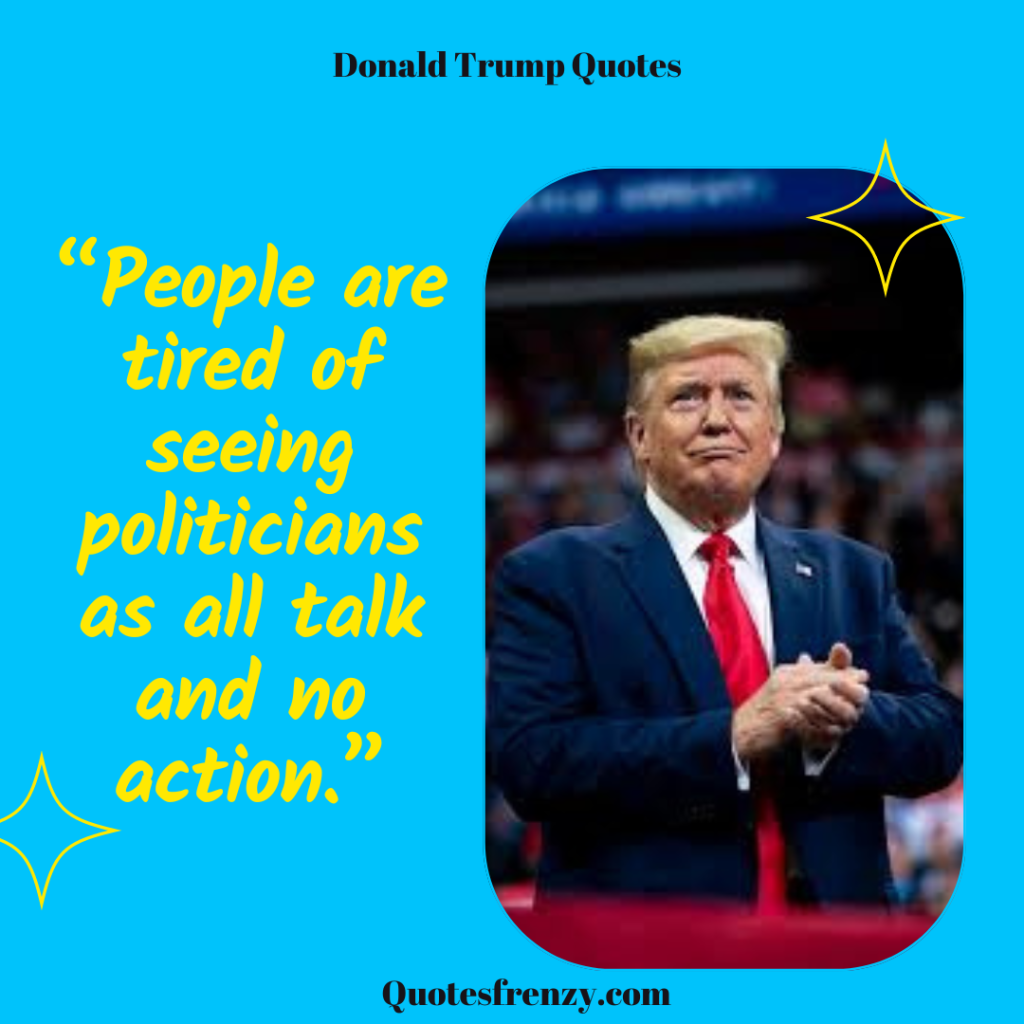 “My father was a successful real estate developer, and he was a very tough man but a good man. My father would always praise me. He always thought I was the smartest person.”

“I’ve been making deals all my life.”

“America will start winning again, winning like never before.”

“I don’t make deals for the money. I’ve got enough, much more than I’ll ever need. I do it to do it.”

“I give to everybody. When they call, I give. And do you know what? When I need something from them two years later, three years later, I call them, they are there for me.”

“I have a great, great company. I employ thousands of people. And I’m very proud of the job I did.”

“I’ve met some great people that deal with me in the press. I’ve also met some people that were very dishonorable, frankly.”

“I think I was born with the drive for success because I have a certain gene.”