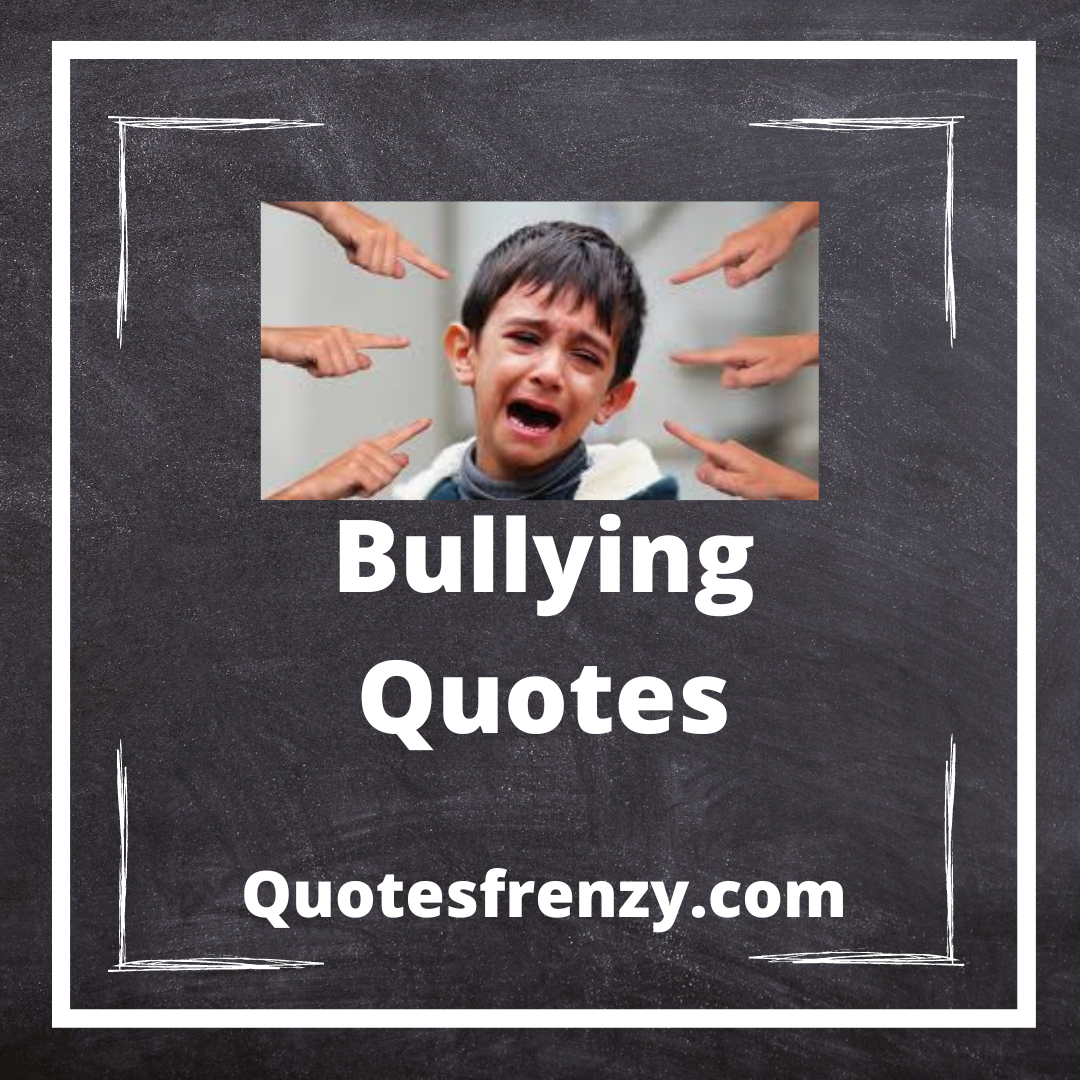 Bullying Quotes-Why is it that many individuals like to intimidate or force their will on others?  That is a question that causes much discussion.  When a school aged child tries this behavior on another it is referred to as bullying.  More specifically bullying involves the threatening, spreading of rumors, and verbal or physical act to name a few.  Once an individual repeatedly does one or more of these acts they are a bully.  The victim of such cruelty normally experiences psychological damage.  Many popular world figures and average figure alike have spoken out against bullying.  Here are a few profound Bullying Quotes.

“Stop Bullying. No one deserves to feel worthless.” Rebecca Black 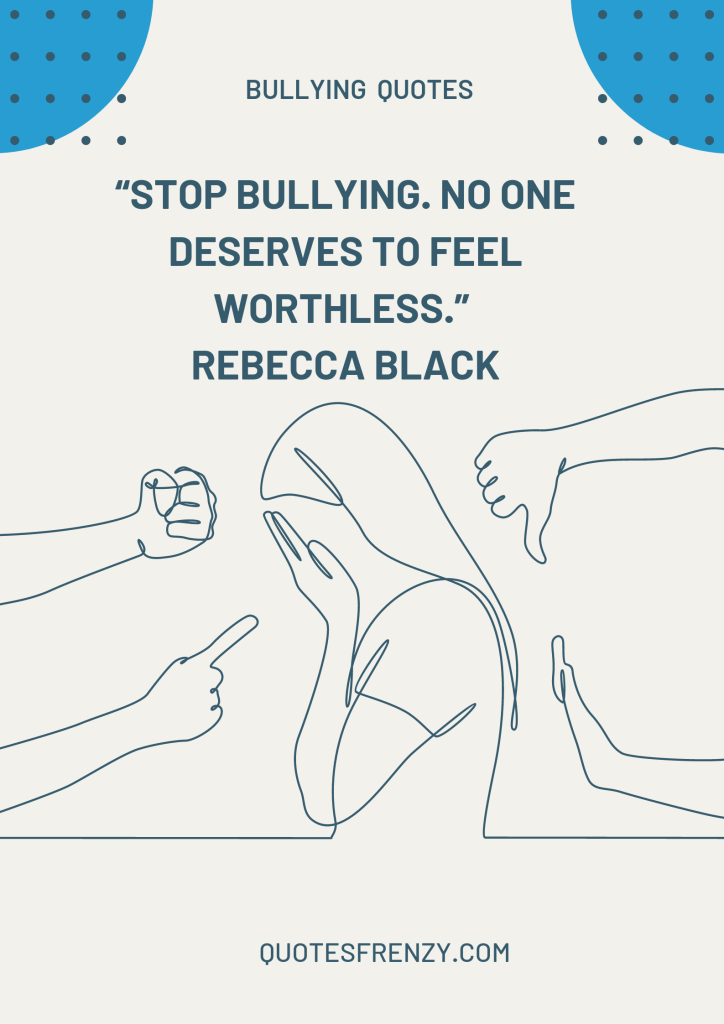 “We have got to dispel this myth that bullying is just a normal rite of passage.” Barack Obama

“Bullying exists because of a lack adult intervention.” Stuart Green

“Everyone who wants to do good to the human race always ends in universal bullying.” Aldous Huxley

“Courage is fire, and bullying is smoke.” Benjamin Disraeli 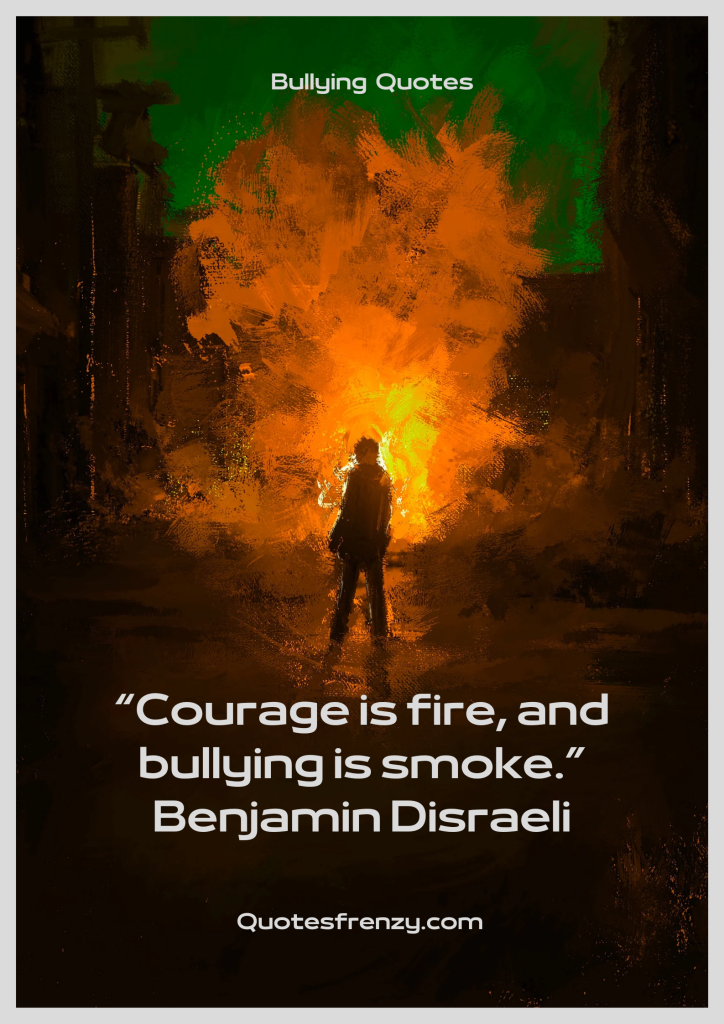 “I realized that bullying never has to do with you. It’s the bully who’s insecure.” Shay Mitchell

“If you see someone being bullied, make it stop. Why is that so hard for us to do?” Susane Colasanti

“We have a Bill of Rights, which protects each of us from a bullying society, but no Bill of Responsibilities, which would oblige us to answer to the needs of others.” Scott Sanders

“Never be bullied into silence. Never allow yourself to be made a victim. Accept no one’s definition of your life; define yourself.” Harvey Fierstein

“It gets better. – On his campaign against bullying.” Sergio Martinez

“Life is a ﬁght, but not everyone’s a ﬁghter. Otherwise, bullies would be an endangered species.” Andrew Vachss 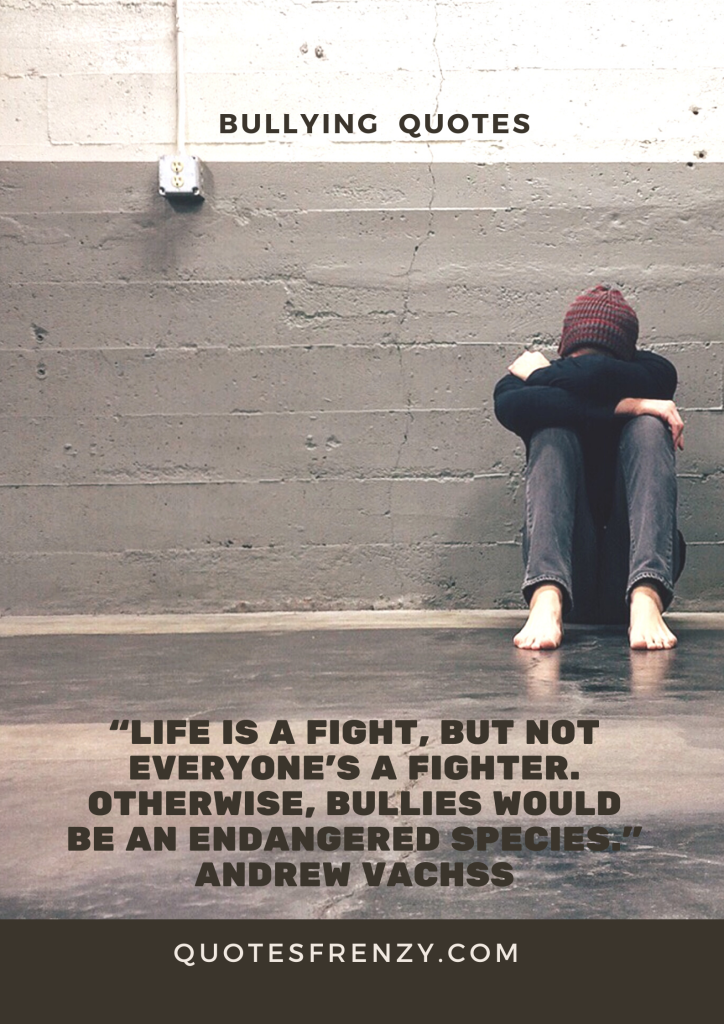 “Bullying wasn’t okay in elementary school and it isn’t okay now, especially when it comes in the form of a U.S. Supreme Court decision.” John Doolittle

“I just want the bullying to stop. That is all I ever wanted. I used to love going to school. Now I hate it.” Tim Field

“The bullying was hideous and relentless, and we turned it round by making ourselves celebrities.” Julian Clary

“Unless and until our society recognizes cyber bullying for what it is, the suffering of thousands of silent victims will continue.” Anna Maria Chavez

“That is the biggest form of bullying ever, the paparazzi. Printing lies, making accusations, it’s just bullying.” Mila Kunis 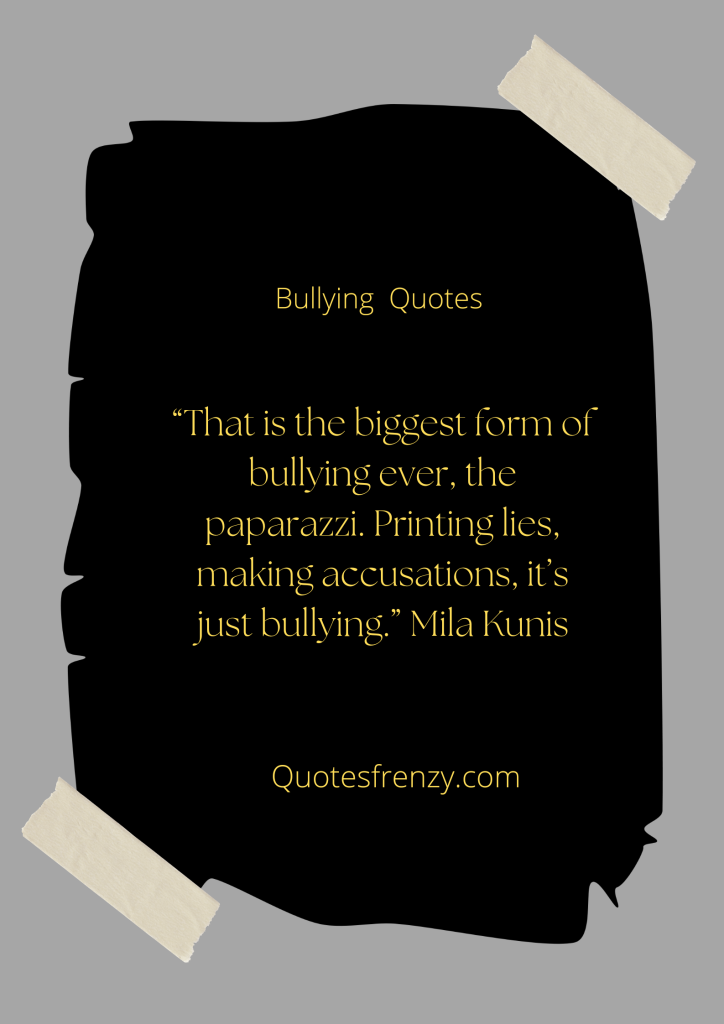 “It doesn’t prove anything except that you’re bullying us. Which, as I recall, is a sign of cowardice.” Veronica Roth

“In the gospel of Jesus Christ, there is no place for ridicule, bullying, or bigotry.” Neil L. Andersen

“Bullying can leave scars that do not heal.” Megyn Kelly

“My self-esteem had been crushed through years of childhood bullying and serious abuses, which would take me decades to overcome.” Bryant H. McGill

“Bullying is a horrible thing. It sticks with you forever. It poisons you. But only if you let it.” Heather Brewer 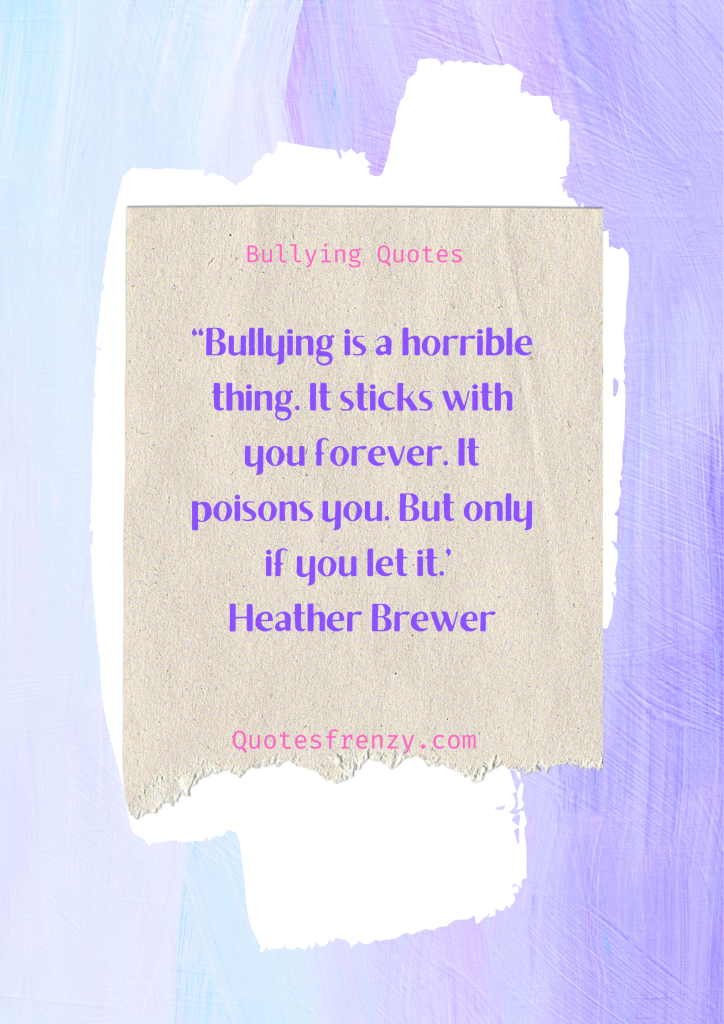 “Harmony can not thrive in a climate of mistrust, cheating, bullying; mean-spirited competition.” Dalai Lama

“One’s dignity may be assaulted, vandalized and cruelly mocked, but it can never be taken away unless it is surrendered” Michael J. Fox – Bullying Quotes 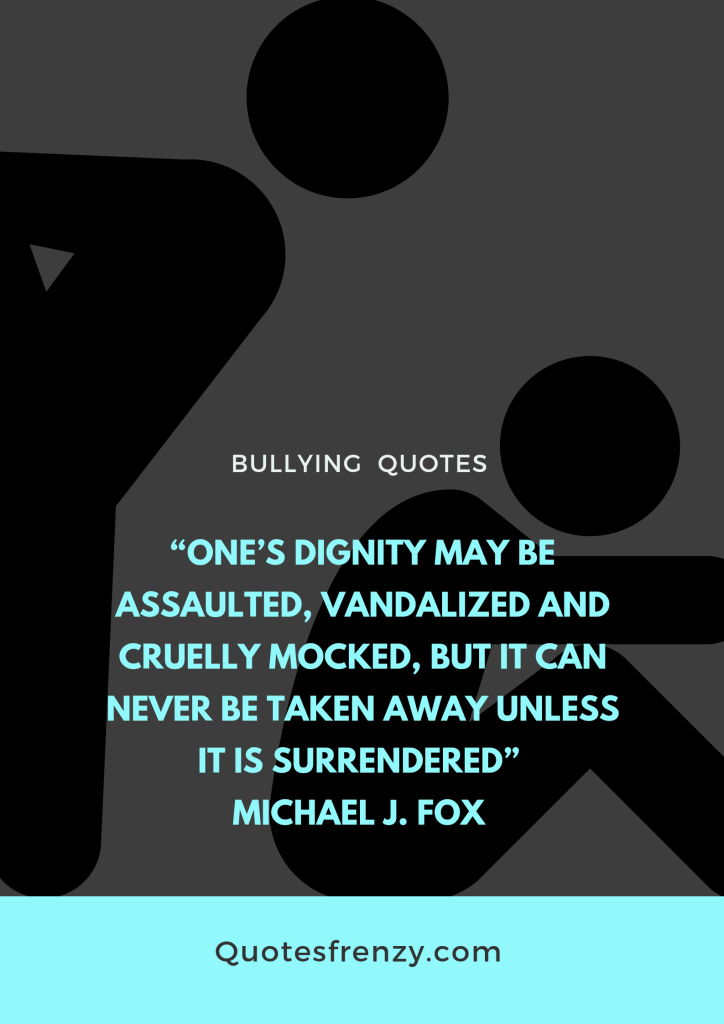 Individuals may be able to physically assault you, or lie on you but they should never be able to take your self-worth.  This is extremely difficult to do.  That is giving in, submitting.  Bullying damages you not only physically but mentally as well.  However studies have shown that one way to possibly overcome a bully or bullying is to stand firm.  Keep your head up high regardless of what the bully does.  Do not let them break you down inside.


Many persons believe that bullying can help to develop a person.  But it has been shown that bully is more harmful than good.  The bully destroys their victim not only physically but mentally.  The bully also shatters their own character as they will be seen by many in a negative light.  Doctors say quite often a bully is trying to hide some inner fear that attacks them inside so they act out on others.

“A lot of people are afraid to tell the truth, to say no. That’s where toughness comes into play. Toughness is not being a bully. It’s having backbone”  Robert Kiyosaki – Bullying Quotes


Yes indeed! You must be mentally strong to deal with bully.  Standing up to a bully requires great strength.  This is because most bullies are physically overpowering in appearance.  The person who is strong is not the one who picks on or intimidates another because they are bigger.  It is the individual who is smaller and is willing to say no and stand for what is right