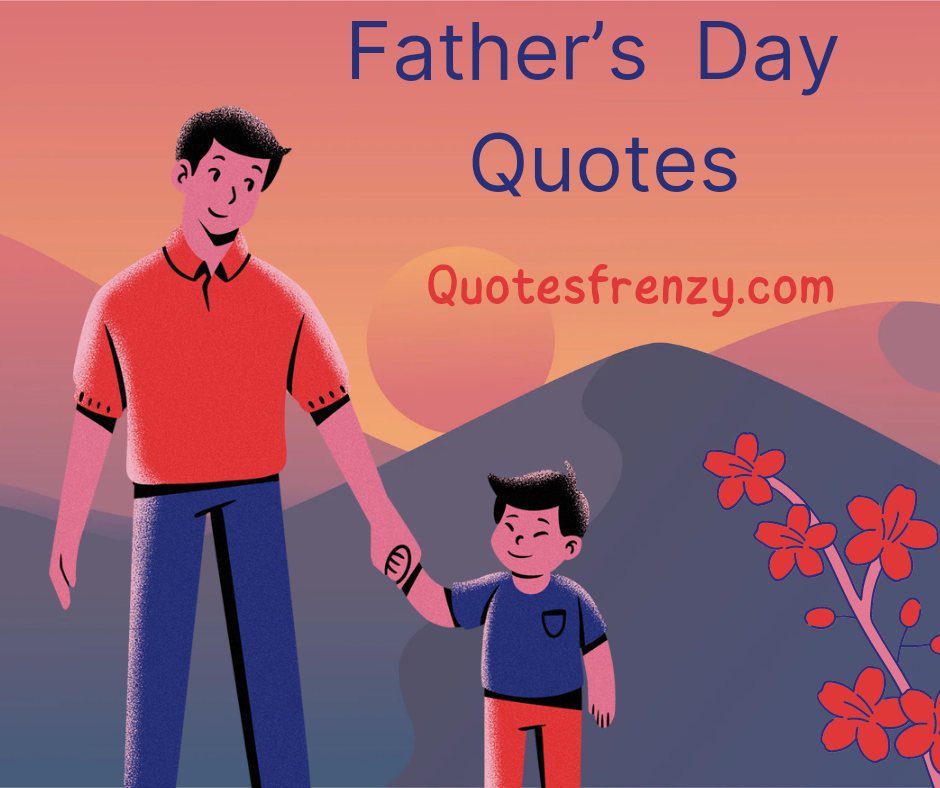 Father’s Day Quotes-Father’s Day is just right around the corner. When was the last time to talked to your dad?  We often get shy talking to our dads sometimes compared to when we are talking to our moms but you know what, we need to remind our fathers just how much we care for them because hearing them from you means so much to them. This father’s day let him know how much you miss talking to him and doing all the things you used to do. Here are some Father’s Quotes to remind you just how much you value your dad.

My father gave me the greatest gift anyone could give another person, he believed in me. –Jim Valvano 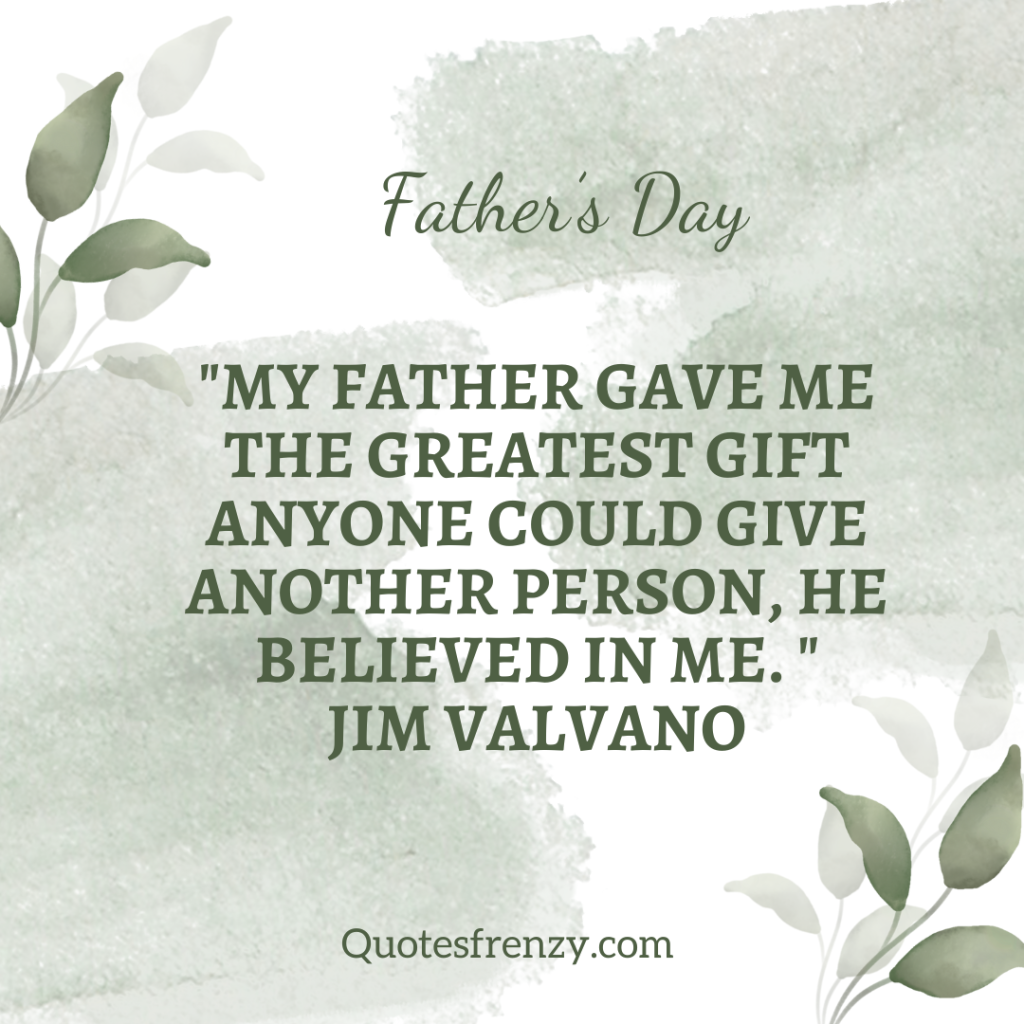 Remember that time when everyone else doubted you? When everyone said you couldn’t do it or that you we’re a failure. It was your dad who told you that you can all prove them wrong. He was the one that believed in you even in your darkest moments. He held out his hand to you and helped you stand up again because that’s just what dads do. No matter where life takes us, dads always got our back. 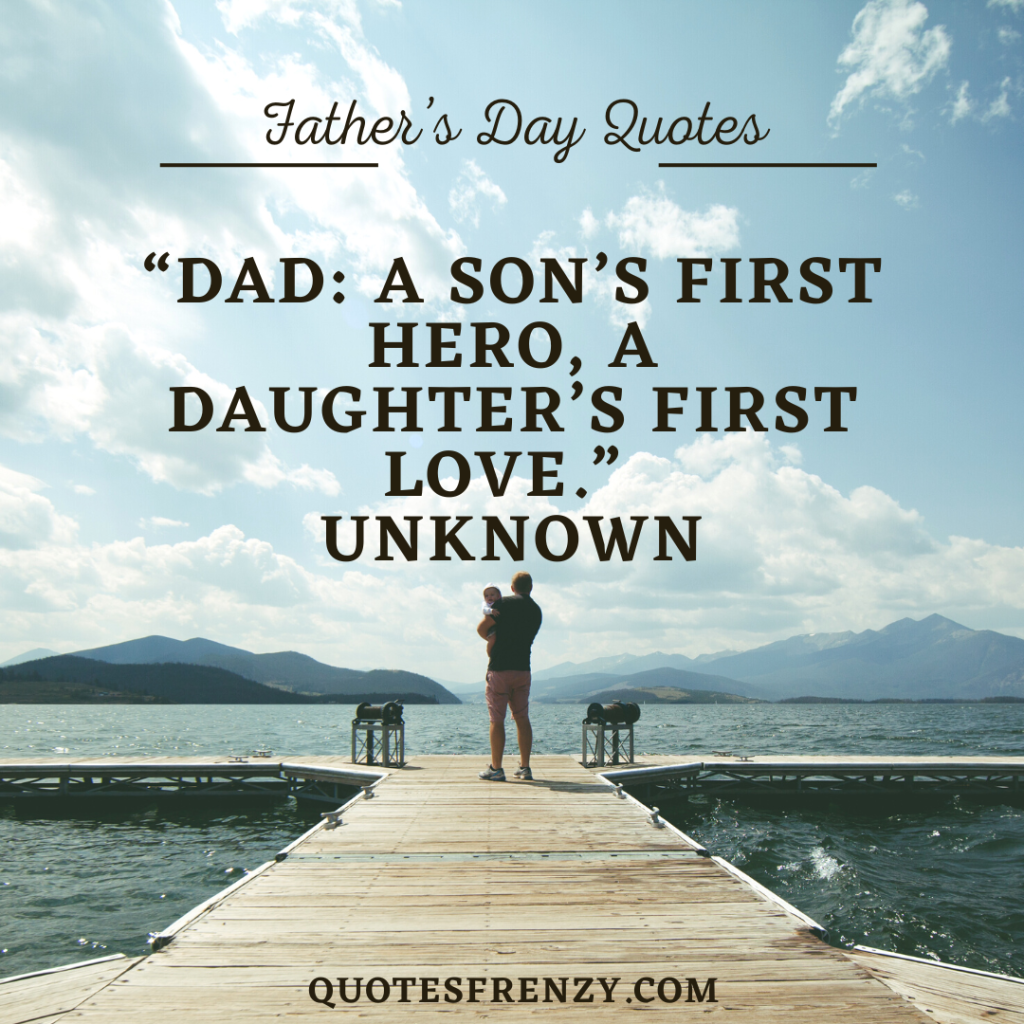 “The power of a dad in a child’s life is unmatched.” —Justin Ricklefs

“It is a wise father that knows his own child.” —William Shakespeare

“One father is more than a hundred schoolmasters.” —George Herbert

“A girl’s first true love is her father.” —Marisol Santiago

“If at first you don’t succeed, call Dad.”_ Unknown

“Who needs a superhero when I have you as my Dad?”  _ Unknown

“A father’s smile has been known to light up a child’s entire day.” —Susan Gale 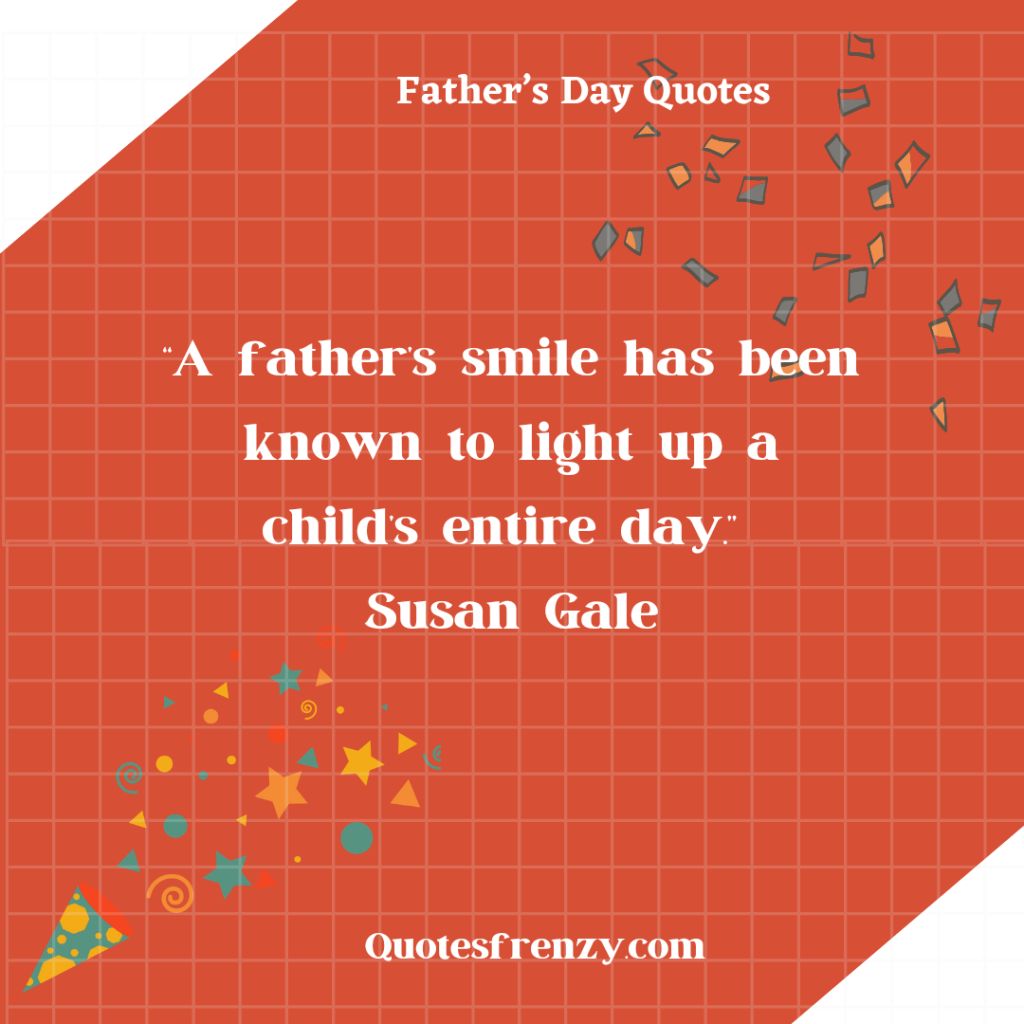 “A father doesn’t tell you that he loves you. He shows you.” —Dimitri the Stoneheart

“Some people don’t believe in heroes but they haven’t met my dad!” _ Unknown

“Fathers just have a way of putting everything together.” —Erika Cosby

“Behind every great daughter is a truly amazing father.” —Unknown

“To her, the name of father was another name for love.” —Fanny Fern

“The older I get, the smarter my father seems to get.” —Tim Russert 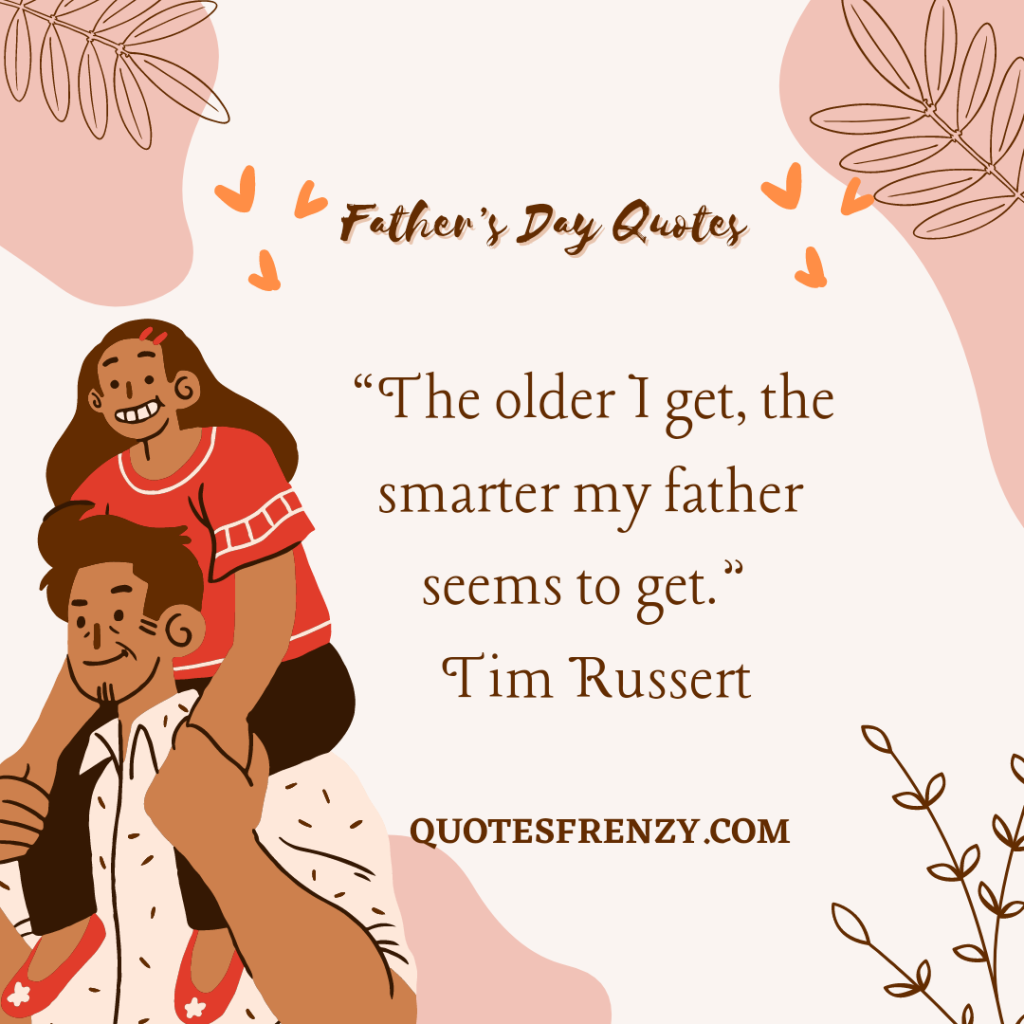 “No music is so pleasant to my ears as that word―father.” —Lydia Maria Child

“A father carries pictures where his money used to be.” —Steve Martin

“When my father didn’t have my hand, he had my back.” —Linda Poindexter

“A father is someone you look up to no matter how tall you grow.” —Unknown

“The greatest mark of a father is how he treats his children when no one is looking.” —Dan Pearce 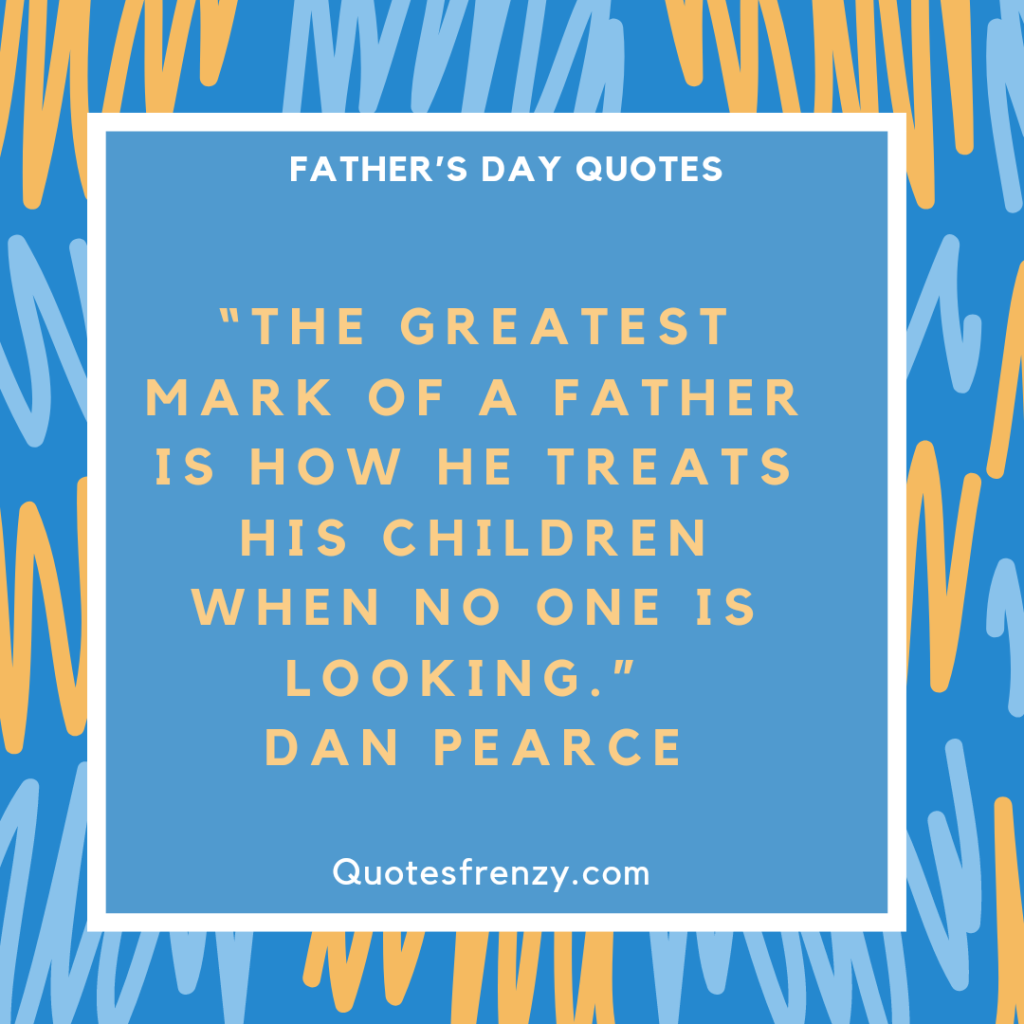 “Fathers, be good to your daughters. You are the god and the weight of her world.” —John Mayer

“A father is a banker provided by nature.” _French proverb

“The older I get, the smarter my father seems to get.” _ Tim Russert

“Dad, you’re someone to look up to no matter how tall I’ve grown.” _ Unknown

“He didn’t tell me how to live; he lived, and let me watch him do it.”_ Clarence B Kelland 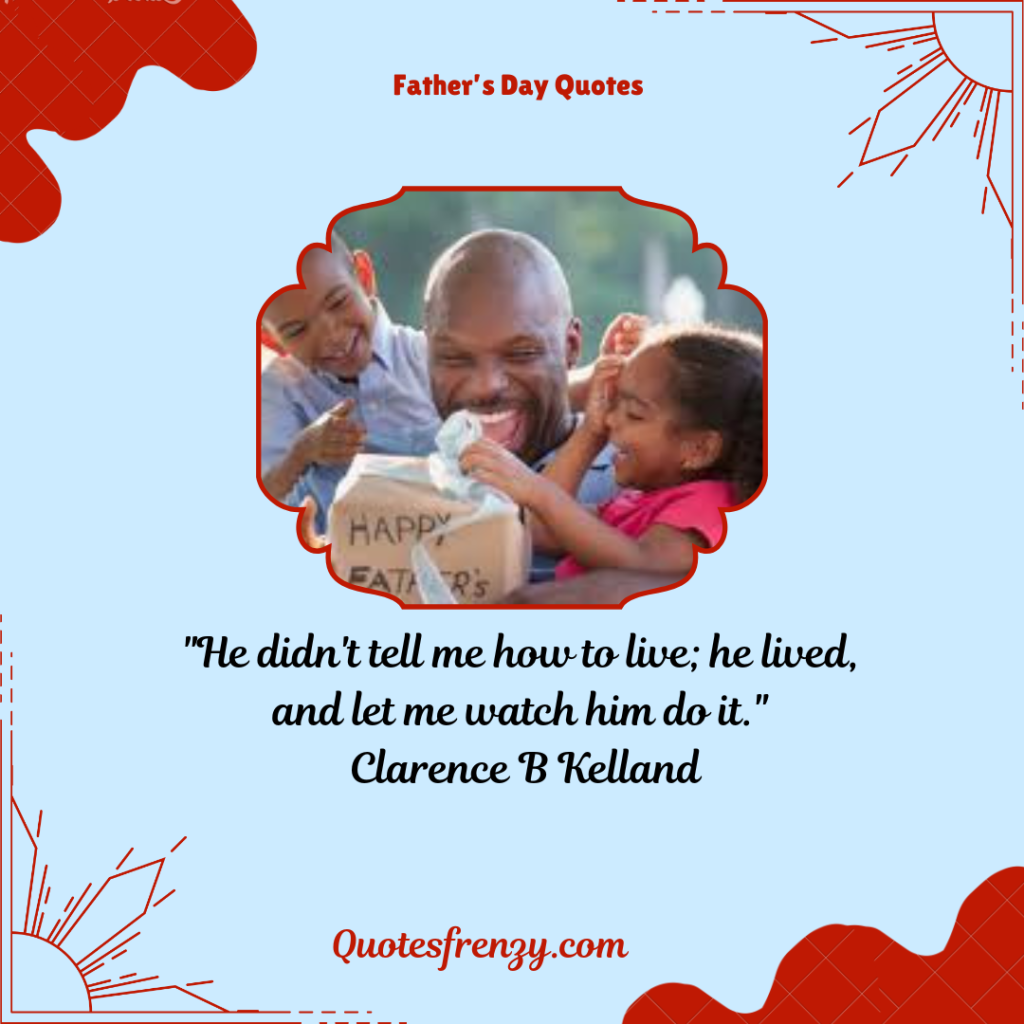 “It is a wise father that knows his own child.”  _ William Shakespeare

“The heart of a father is the masterpiece of nature.”   _ Antoine François Prévost

“My father taught me to work hard, laugh often, and keep my word.” _ Michelle Obama

“Any fool can have a child. That doesn’t make you a father. It’s the courage to raise a child that makes you a father.” _ Barack Obama

“Daddies don’t just love their children every now and then, it’s a love without end.”_ George Strait

“The imprint of a father remains forever on the life of the child.”  _ Roy Lessin 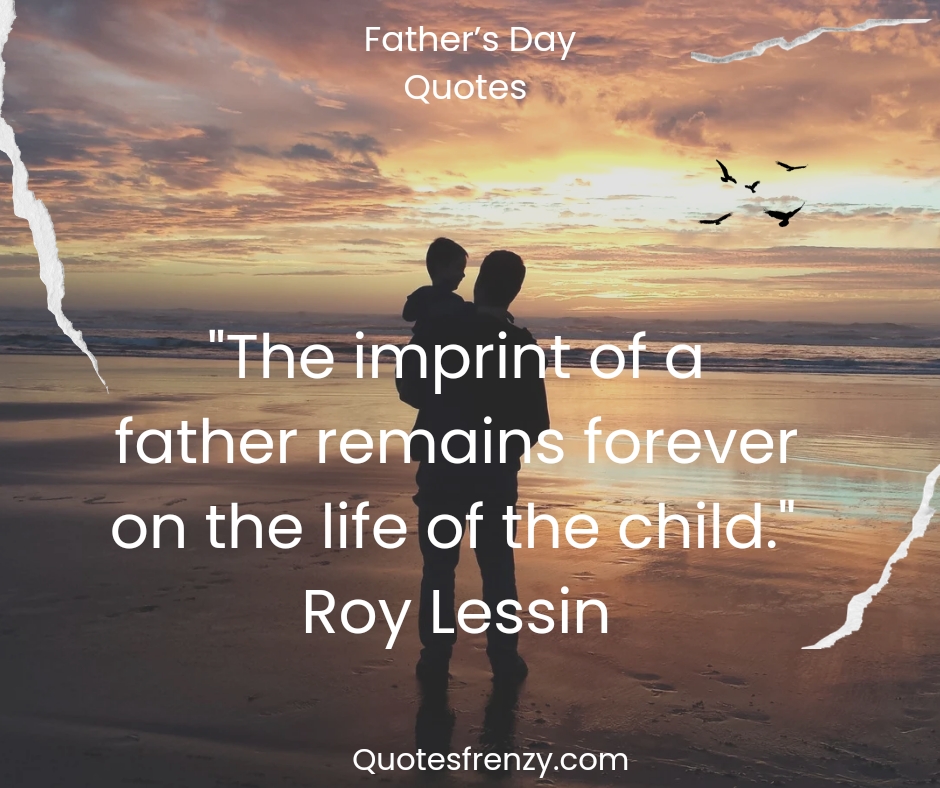 “A grandfather is someone with silver in his hair and gold in his heart.”  _ Unknown

“When my father didn’t have my hand, he had my back.”  _ Linda Poindexter

“My fingers may be small but I’ve got my daddy wrapped around them.” _ Unknown

“Someday I will find my Prince but my Daddy will always be my King.” _ Unknown

“Father’s Day is hopefully a time when the culture says, ‘This is our moment to look at who our men and boys are.” Michael Gurian

“Nothing I’ve ever done has given me more joys and rewards than being a father to my children.” Bill Cosby 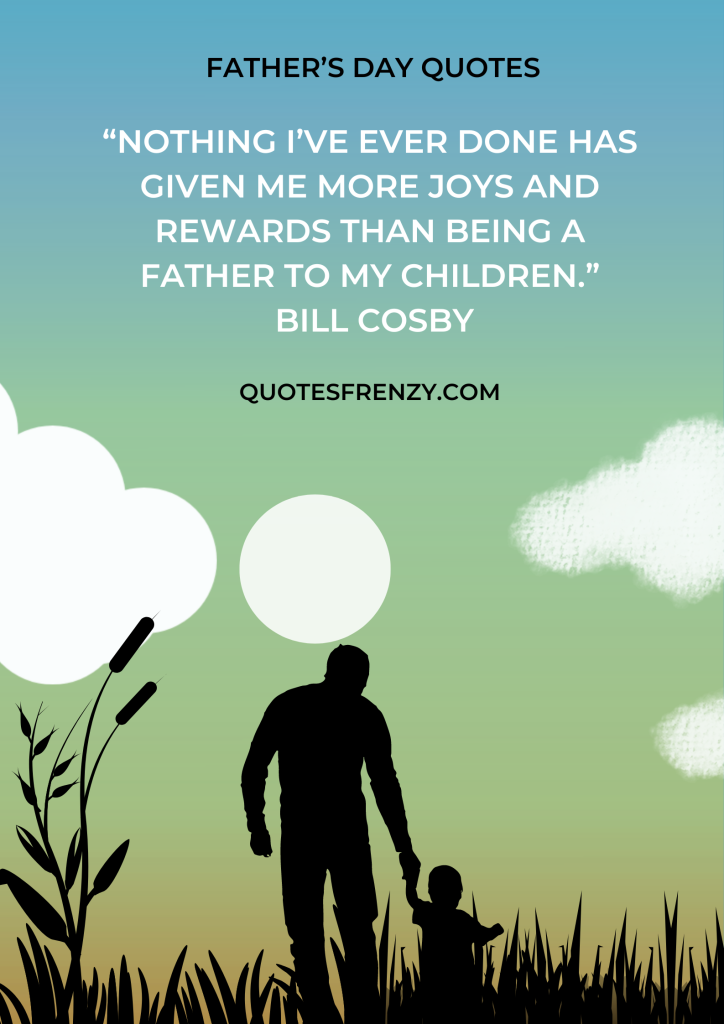 “It doesn’t matter who my father was; it matters who I remember he was.” Anne Sexton

“It is easier for a father to have children than for children to have a real father.” Pope John XXIII

“One father is more than a hundred schoolmasters.” George Herbert

“Of course my father was a great influence on me. He taught me how to read.” Michael Foot

“Father! – to God himself we cannot give a holier name.”

“My father taught me to work; he did not teach me to love it.” Abraham Lincoln 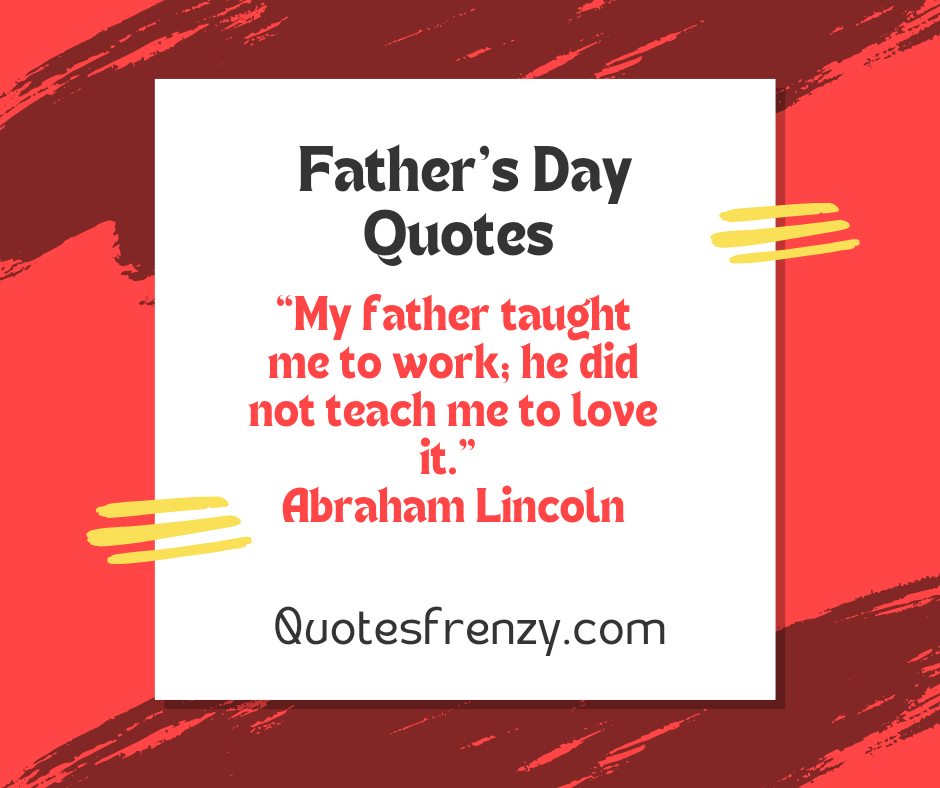 “The worst misfortune that can happen to an ordinary man is to have an extraordinary father.” Austin O’Malley

“The older I get, the smarter my father seems to get.” Timothy J. Russert

“To a father growing old nothing is dearer than a daughter.” Euripides

“It is much easier to become a father than to be one.” Kent Nerburn

“Being a father helps me be more responsible… you see more things than you’ve ever seen.” Kid Rock

“One father is enough to govern one hundred sons, but not a hundred sons one father.” George Herbert 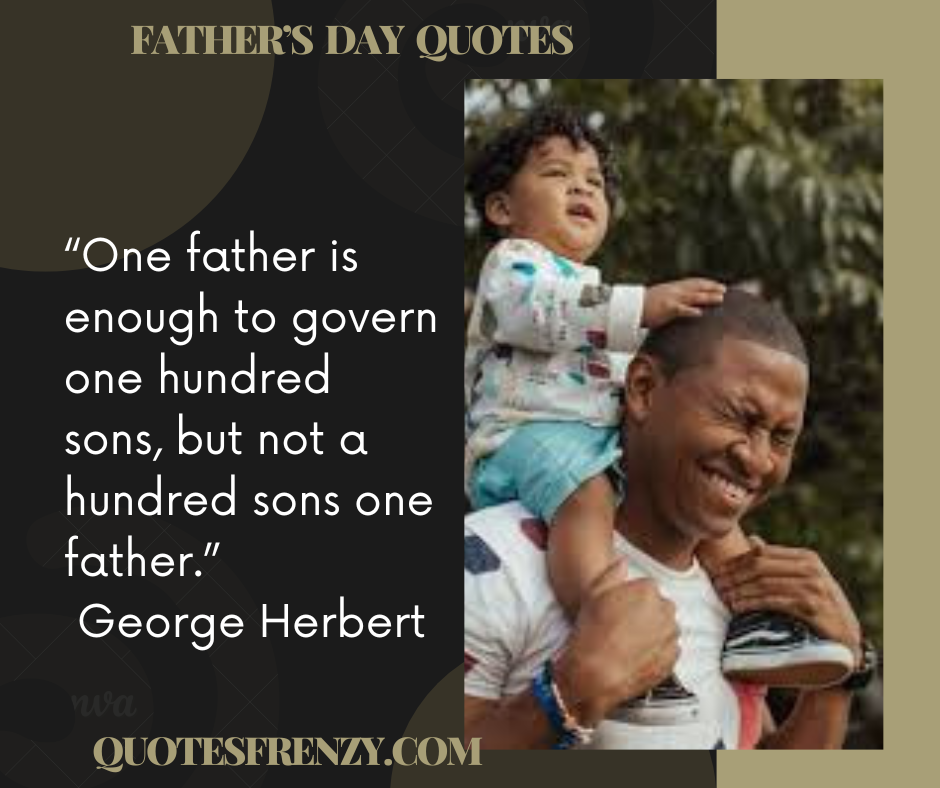 “A father carries pictures where his money used to be.” Steve Martin

“To her, the name of father was another name for love.” Fanny Fern

“You know, fathers just have a way of putting everything together.” Erika Cosby

“Dads don’t need to be tall and broad-shouldered and clever. Love makes them so.”   _Pam Brown

“Life doesn’t come with an instruction book; that’s why we have fathers.” H. Jackson Brown 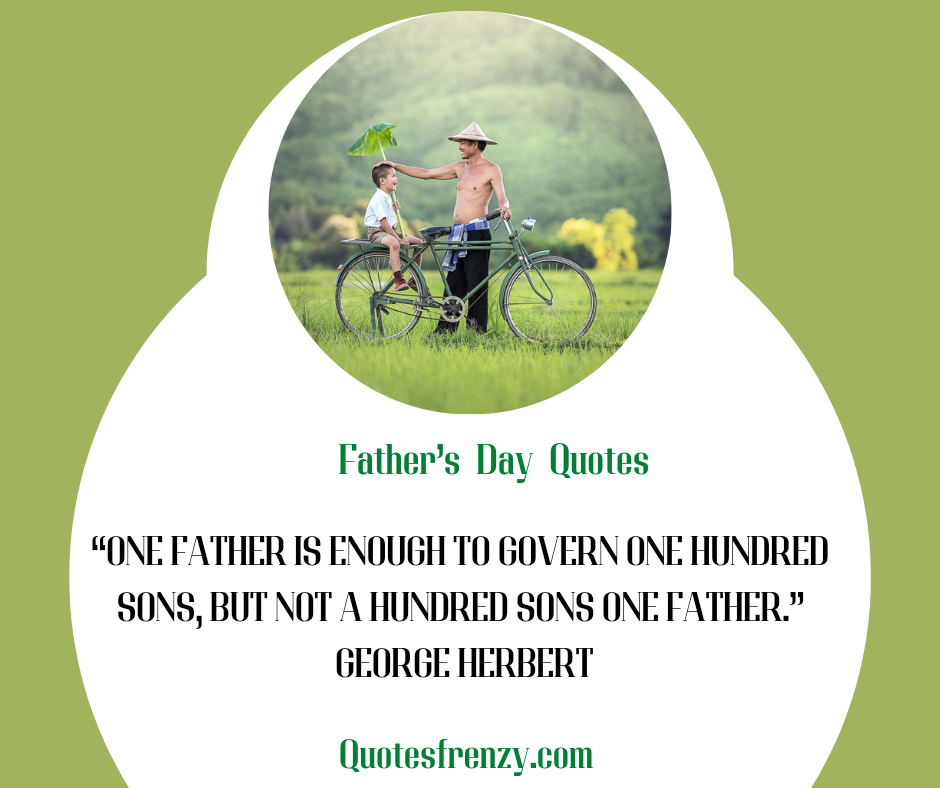 “Without my dad, I wouldn’t be here.” Maria Sharapova

No matter how much you discipline me dad, I know it’s for my own good

My father always told me, ‘Find a job you love and you’ll never have to work a day in your life.” Jim Fox

Shakespeare has enlightened a generation of readers since centuries. The man has always provided an insight on every matter. When it comes to describing the relation of a father and son, Shakespeare uses following quotes.

“When a father gives to his son, both laugh; when a son gives to his father, both cry”.  if someone intends to pay tribute to his dad on father’s day, It is good idea to begin with this quote


The relationship of a person with his family can be best described by a psychiatrist. Sigmund Freud, a big name in the field of psychology describes this relation as

“I cannot think of any need in childhood as strong as the need of a father’s protection.”

The quote makes it evident how major roles father play in the grooming of a kid. In fact the major nursery for a kid is home. On father’s day kids can use this quote to acknowledge the importance of their dads in the best way.


Perhaps this is the most beautiful quote for the children of all ages. It is a fact that everyone needs care, protection and advice of father in different stages of life. A person may succeed in achieving too much in his life. Still, he would always look up to his father for inspiration.

Father’s day celebrations include one must thing; a good happy father’s day quote. But it must roam around, acknowledging the role of a dad in a kid’s life.