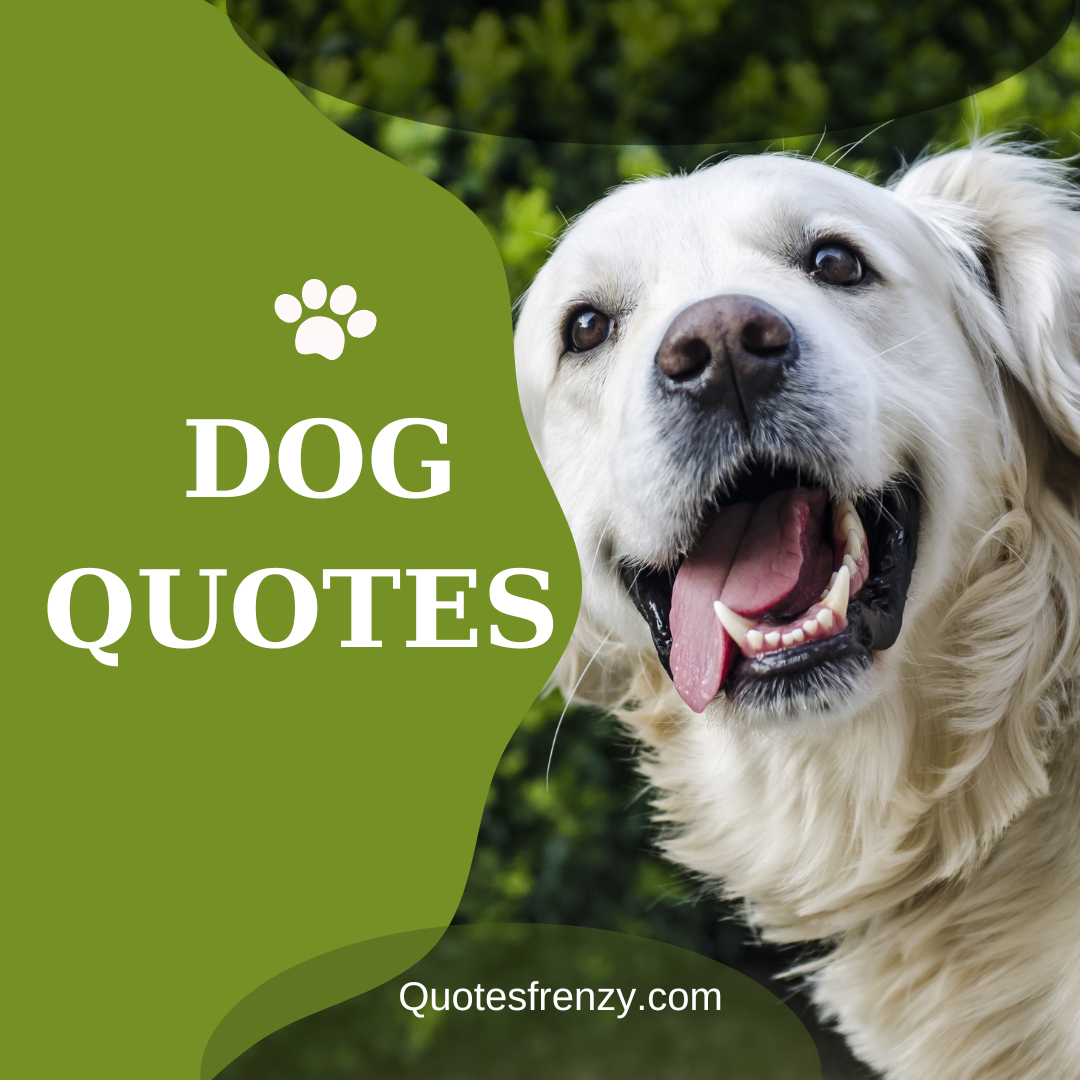 Dog Quotes-Dogs have found a special place in the heart of the human being. What actually makes this special relationship? These Dog Quotes will lead you to the understanding of the animal. Dogs are man’s best companion. They are taken to almost all places that people go to.

Dogs are animals with a sense of protection. Not for their own benefit, but to their master. This is one of the reasons why a dog has been domesticated. These Dog Quotes will reveal more about the personality of the dog.

“Once you have had a wonderful dog, a life without one, is a life diminished.” Dean Koontz 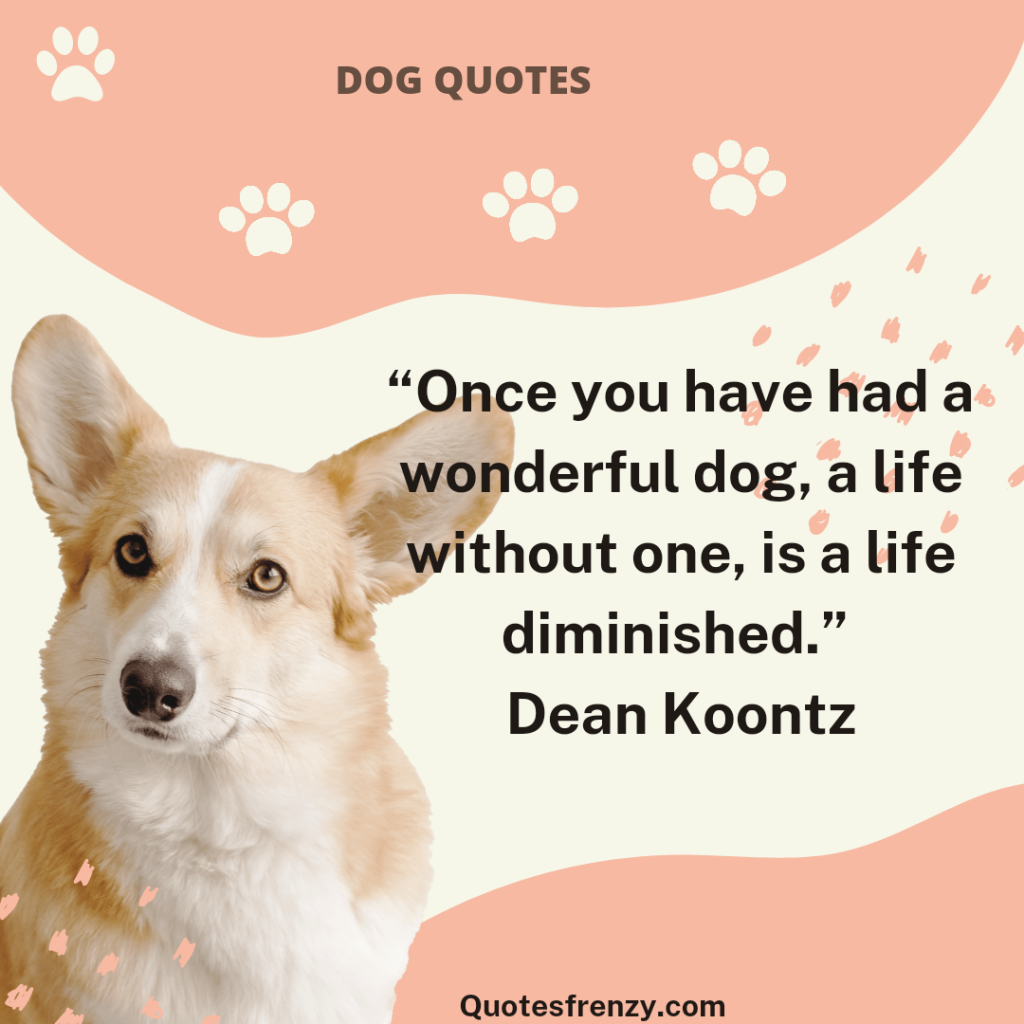 “Dogs are not our whole life, but they make our lives whole.” Roger Caras

“A house is not a home until it has a dog.” Gerald Durrell

“The poor dog, in life the firmest friend. The first to welcome, foremost to defend.” Lord Byron

“The bond with a dog is as lasting as the ties of this earth can ever be.” Konrad Lorenz

“A person who has never owned a dog has missed a wonderful part of life.” Bob Barker

“A dog has the soul of a philosopher.” Plato

“The fidelity of a dog is a precious gift.” Konrad Lorenz

“Only my dogs will not betray me.” Maria Callas 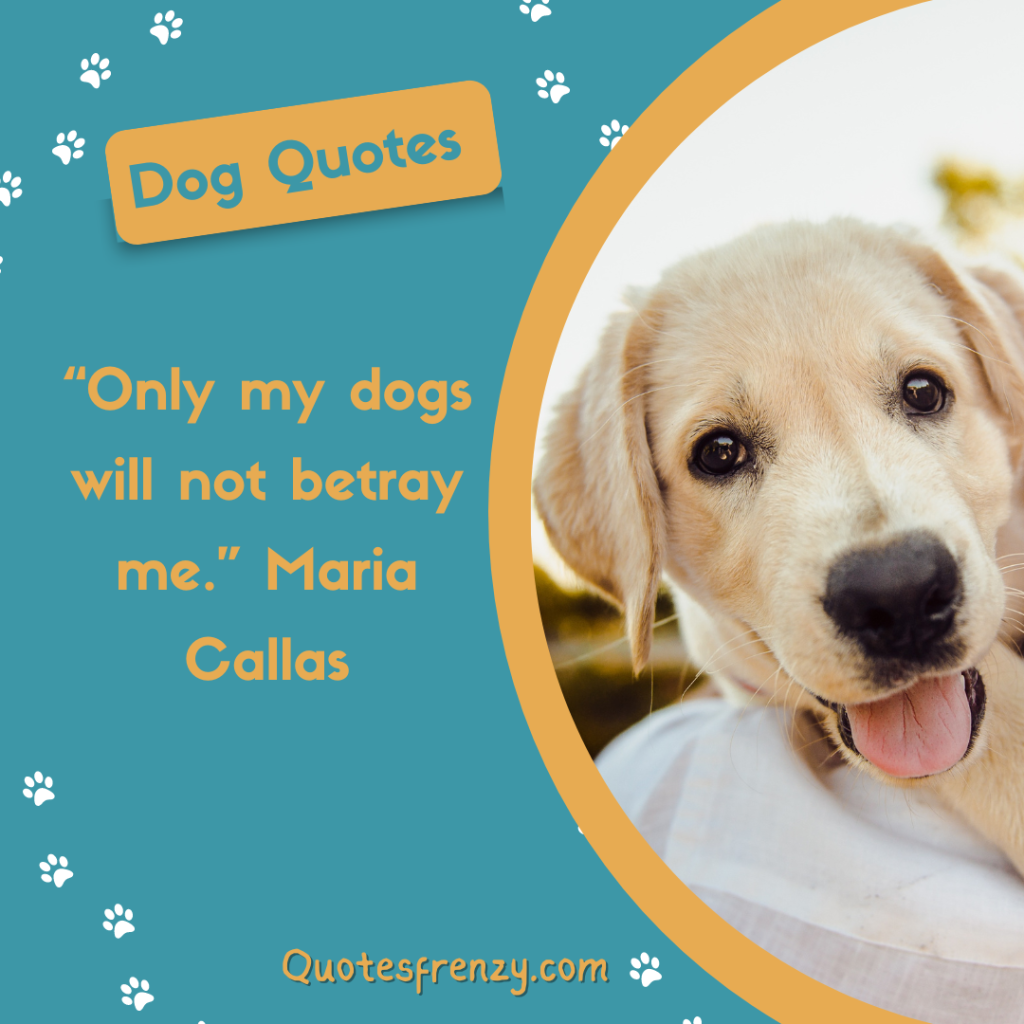 “Keep running after a dog and he will never bite you.” Francois Rabelais

“Never trust a dog to watch your food.” Saint Patrick

“A dog is a liberal… He wants to please everybody.” William Kunstler

“There is honor in being a dog.” Aristotle

“Every dog must have his day.” Jonathan Swift

“Here, Gentlemen, a dog teaches us a lesson in humanity.” Napoleon Bonaparte

“When a dog runs at you, whistle for him.” Henry David Thoreau

“Let dogs delight to bark and bite, for God hath made them so.” Isaac Watts

“A barking dog is often more useful than a sleeping lion.” Washington Irving 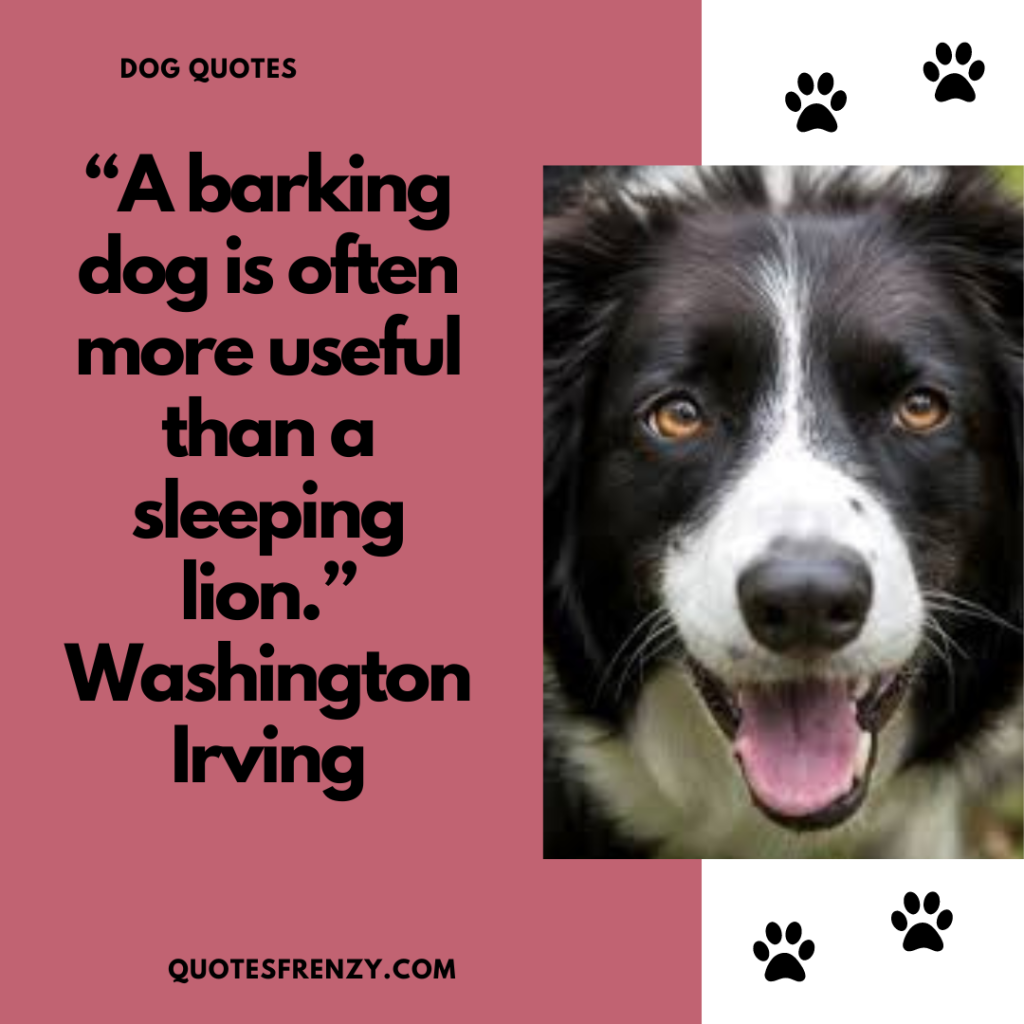 “The dogs with the loudest bark are the ones that are most afraid.” Norman Reedus

“I want to work like a dog, doing what I was born to do with joy and purpose. I want to play like a dog, with total, jolly abandon.” Oprah Winfrey

“Outside of a dog, a book is a man’s best friend. Inside of a dog it’s too dark to read.” – Groucho Marx 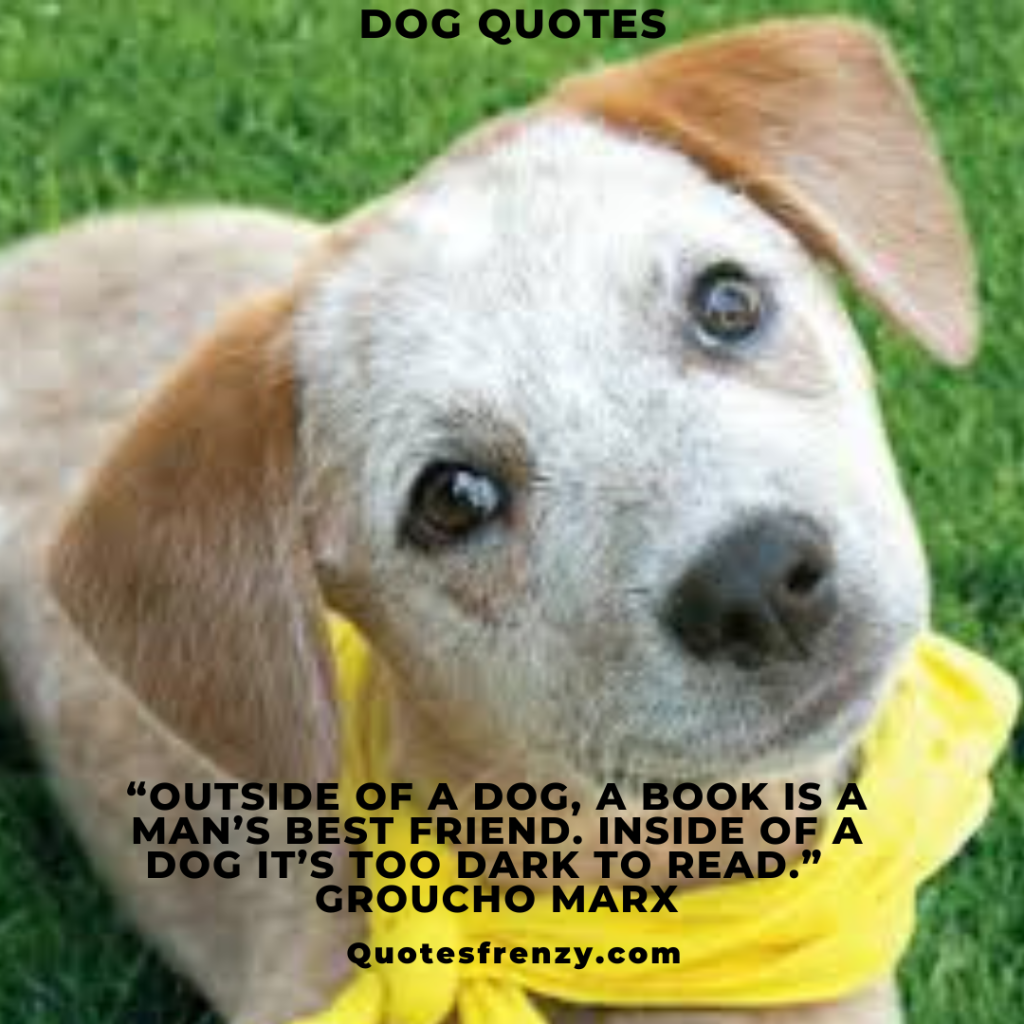 “My fashion philosophy is, if you’re not covered in dog hair, your life is empty.” – Elayne Boosler

“No one appreciates the very special genius of your conversation as the dog does.” – Christopher Morley

“A boy can learn a lot from a dog: obedience, loyalty, and the importance of turning around three times before lying down.” – Robert Benchley

“When a man’s best friend is his dog, that dog has a problem.” – Edward Abbey

“Dogs have boundless enthusiasm but no sense of shame. I should have a dog as a life coach.” – Moby

“You want a friend in Washington? Get a dog.” – Harry S Truman

“The dog is the god of frolic.” – Henry Ward Beecher

“Anybody who doesn’t know what soap tastes like never washed a dog.” – Franklin P. Jones

“What do dogs do on their day off? Can’t lie around – that’s their job.” – George Carlin

“I don’t understand people who don’t touch their pets. Their cat or dog is called a pet for a reason.” – Jarod Kintz

“Animals have come to mean so much in our lives. We live in a fragmented and disconnected culture. Politics are ugly, religion is struggling, technology is stressful, and the economy is unfortunate. What’s one thing that we have in our lives that we can depend on? A dog or a cat loving us unconditionally, every day, very faithfully.” – Jon Katz 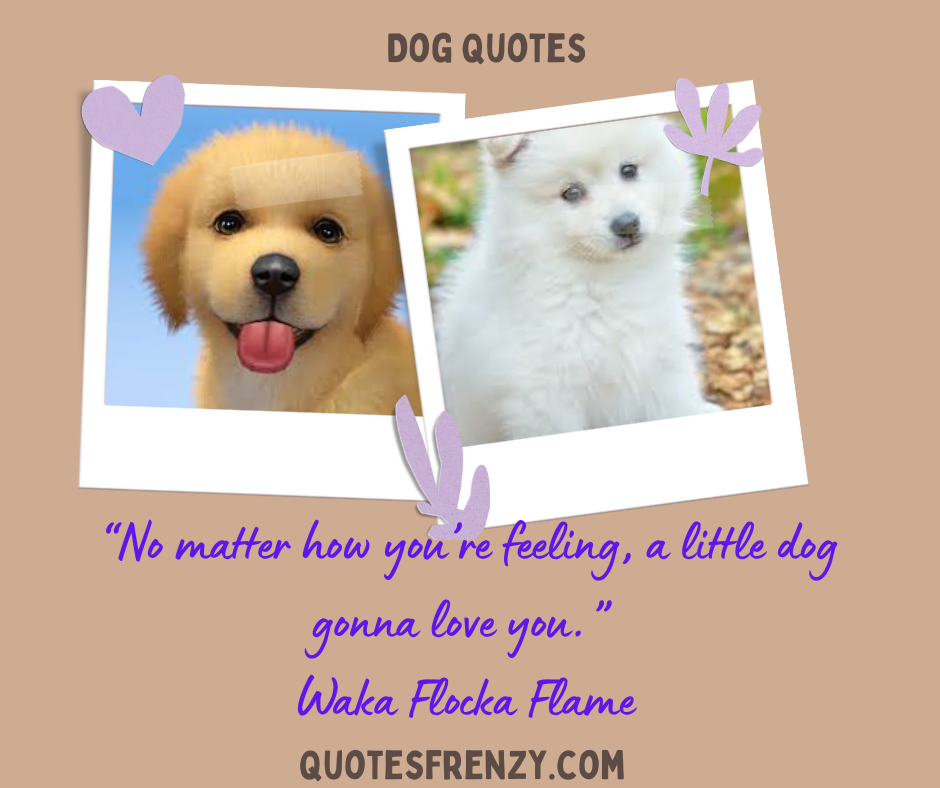 “There’s a saying. If you want someone to love you forever, buy a dog, feed it and keep it around.” – Dick Dale

“When the dog looks at you, the dog is not thinking what kind of a person you are. The dog is not judging you.” – Eckhart Tolle

“The great pleasure of a dog is that you may make a fool of yourself with him and not only will he not scold you, but he will make a fool of himself too.” – Samuel Butler

“Actually, my dog I think is the only person who consistently loves me all the time.” – H. G. Bissinger

“My main characters are the most sunny, happy, optimistic, loving creatures on the face of the Earth. I couldn’t be happier that’s where I start. I can put as many flawed people in the dog’s world as I like, but the dog doesn’t care. Dog doesn’t judge, dog doesn’t dislike. Dog loves. That’s not so bad.” – Bruce Cameron

“Such short little lives our pets have to spend with us, and they spend most of it waiting for us to come home each day.” – John Grogan

“There is no faith which has never yet been broken, except that of a truly faithful dog” – Konrad Lorenz

“If you pick up a starving dog and make him prosperous he will not bite you. This is the principal difference between a dog and man.” – Mark Twain 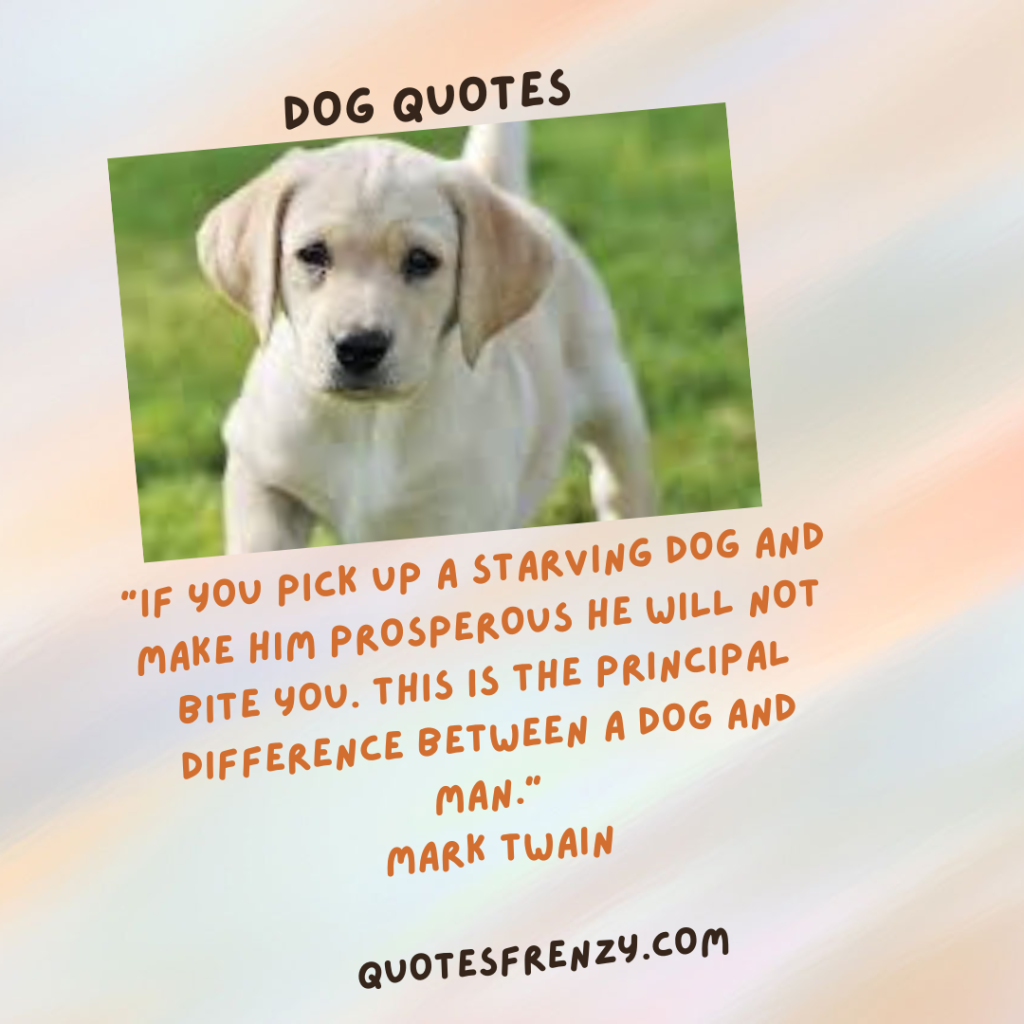 The character of the dog has been used to emulate that of a gentleman. Dogs are very careful animals in nature.  The dog sniffs almost anything before they grab just to be sure.  Their great ability to remember and recognize smells makes them be used in search of lost trails of other animals, human beings or stolen items.

Dogs can stay out in the cold just to watch over you. Many dog owners having reported to have found help because of their dogs. There is one hiker who lost track of the way in the forest and ended up breaking an ankle. His dog went back to follow the track to a public place. The dog then directed people to where his master was. Amazing, right!

Dogs are wise. They crawl away into a quiet   corner and lick their wounds and do not re-join the world until they are whole once more – Agatha Christie

Dogs do not bother people with their problems.  They are unlike human beings who, when they have a bad day will lash it out on others. This great virtue of dogs is one to emulate. Dogs try to take care of their problems in the best way they can without involving their masters. Their withdrawal is the only sign they gave when they are troubled.

So if you do not have a dog, then you are missing out on a batch of love. The dog will teach you much more about love than any article you read will ever reveal to you.