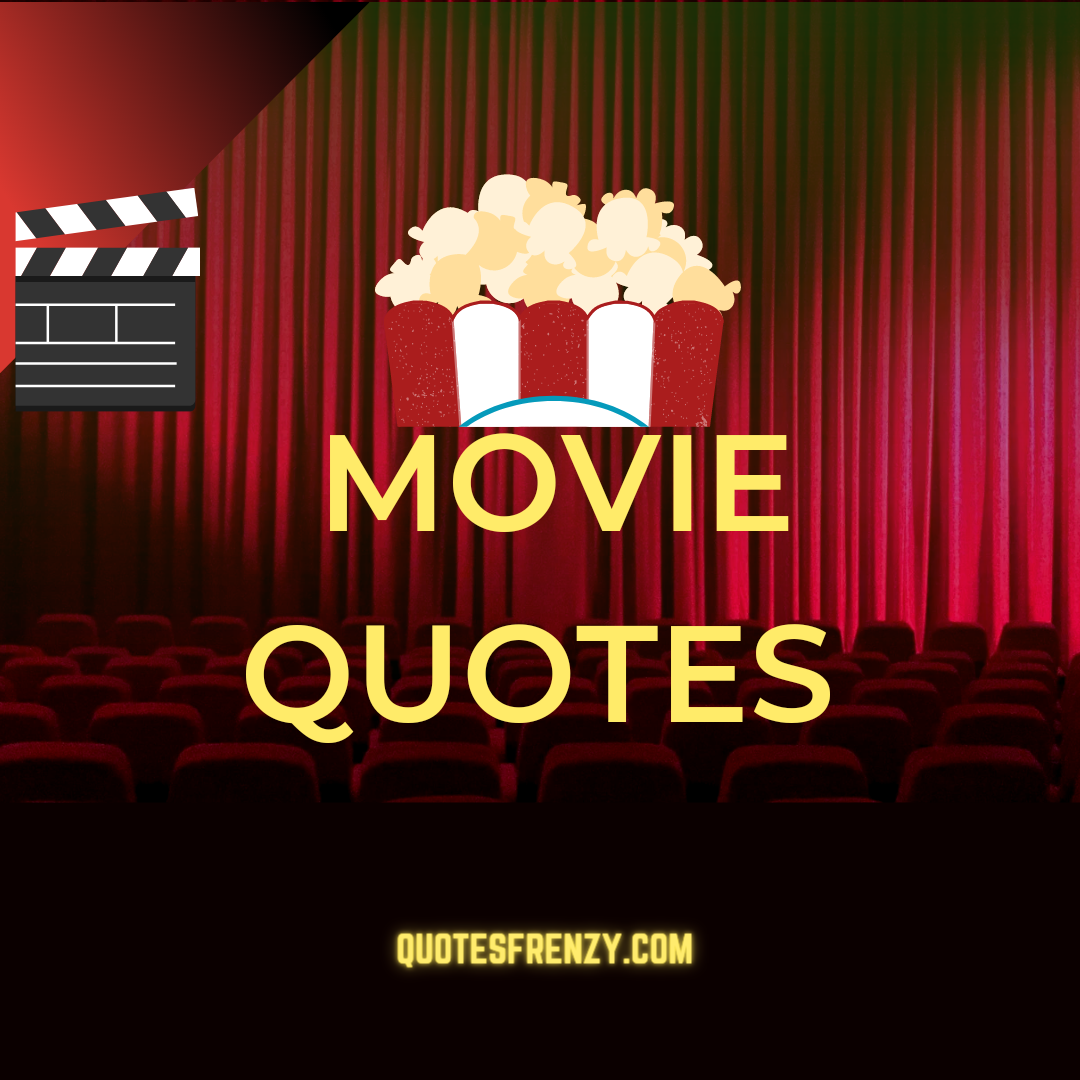 Movie Quotes-Find the beautiful message from “Movie Quotes”. Mr. Anton Yelchin once said that I prefer when movies target my heart instead of my mind. Great movies sometimes produce brilliant dialogues. There are sentences that have not only written film history but also language history. These include movie quotes, which are never forgotten and which have been perpetuated as a winged word in our culture forever. This list represents a collection of the most famous candidates – from well-known films – the classics sorted by themes!

Even after the end of the film, these beautiful quotes can conjure up a smile and remind us of the charm of the blockbuster. Some book and film titles, as well as song lyrics, have already assumed a proverbial character.

Since the beginning of the sound film, screenwriters have been singing memorable sentences into our brains. Some of them are mentioned as under

“Movies are the art form most like man’s imagination.” Francis Ford Coppola 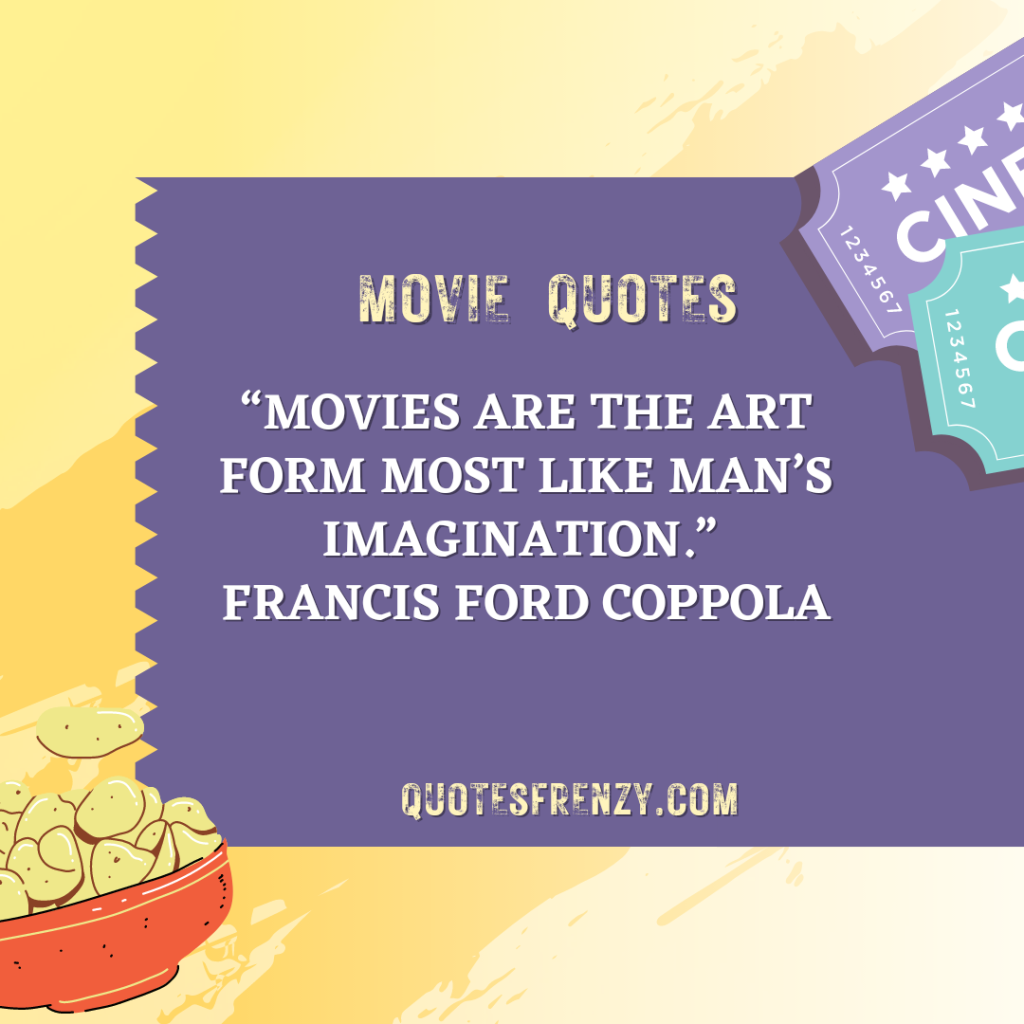 “Movies are, like sharp sunlight, merciless; we do not imagine, we view.” John Updike

“Cinema should make you forget you are sitting in a theater.” Roman Polanski

“Every great film should seem new every time you see it.” Roger Ebert

“A film is never really good unless the camera is an eye in the head of a poet.” Orson Welles

“Directing a movie is serious, it’s not a joke.” Fred Durst

“Cinema is a matter of what’s in the frame and what’s out.” Martin Scorsese 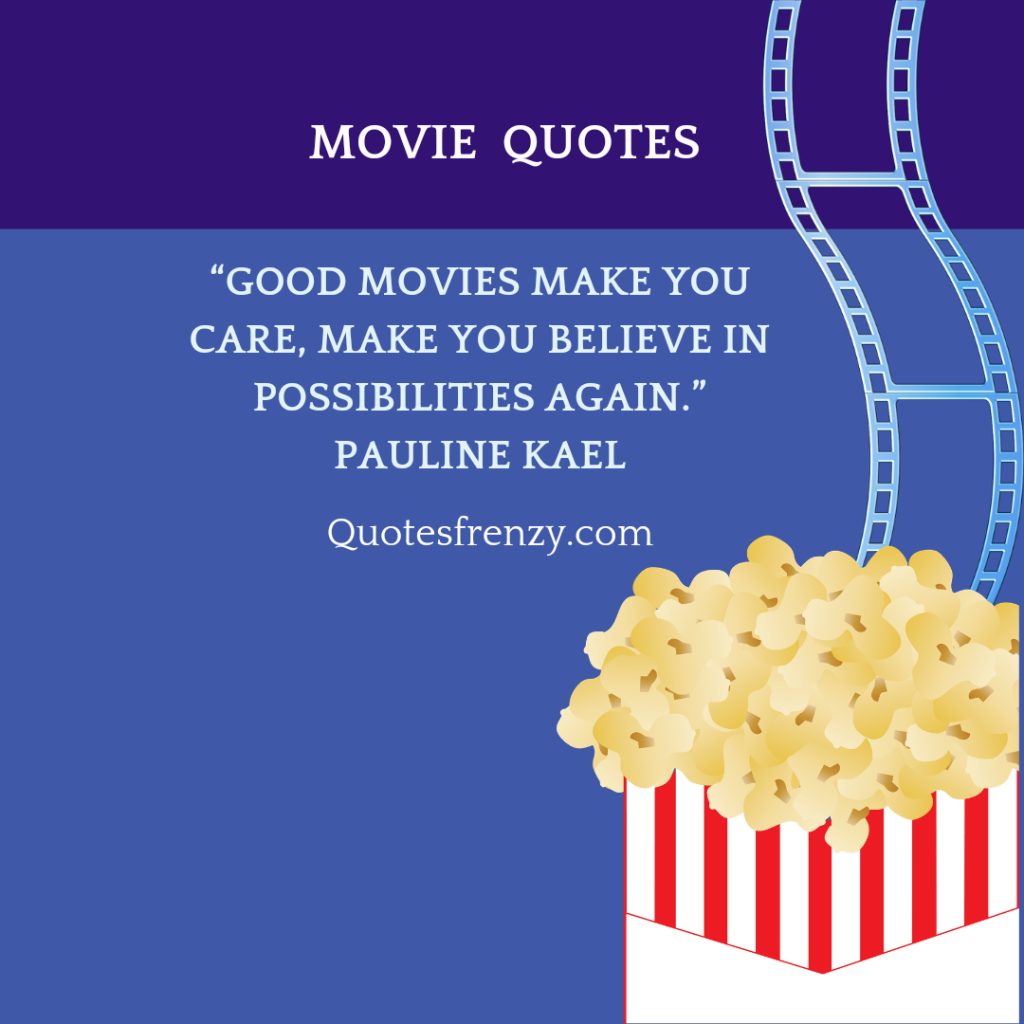 “Films are always pretentious. There’s nothing more pretentious than a filmmaker.” John Milius

“Having your book turned into a movie is like seeing your oxen turned into bouillon cubes.” John le Carre

“The secret to film is that it’s an illusion.” George Lucas

“The movies are the only business where you can go out front and applaud yourself.” Will Rogers

“Every single art form is involved in film, in a way.” Sydney Pollack

“Movies are like an expensive form of therapy for me.” Tim Burton

“Movies are our cheap and easy expression, the sullen art of displaced persons.” Pauline Kael 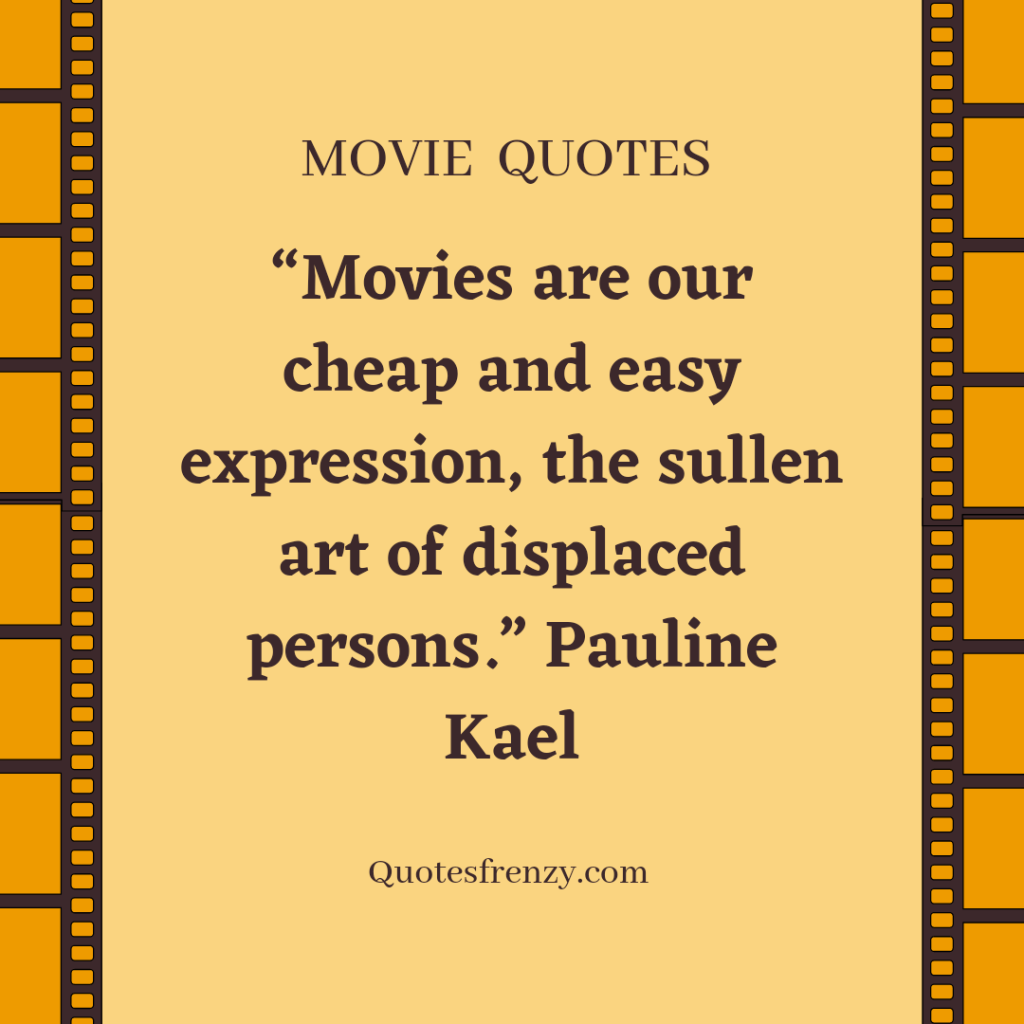 “Every time you make a movie it’s an adventure.” Shia LaBeouf

“Movies took you right up to the edge but kept you safe.” John Updike

“A film has its own life and takes its own time.” Aaron Eckhart

“Movies are something people see all over the world because there is a certain need for it.” Wim Wenders

It’s not who I am Underneath, But what I Do That Defines Me – From the movie “Batman Begins” 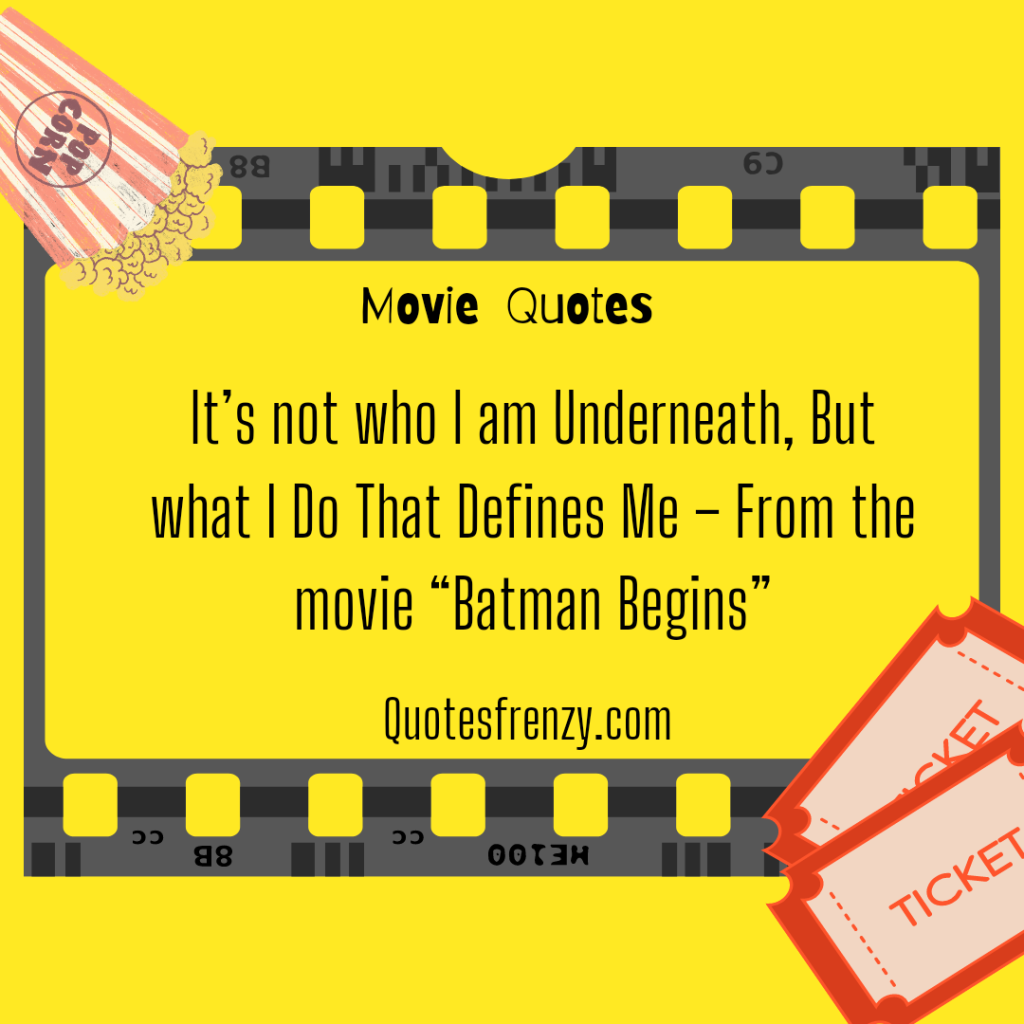 This is one of the best motivational lines was used in the movie “Batman Begins”. It is not to be considered that from a hard time you are passing through, but what you do in your life that defines you.

Get Busy Living, or Get Busy Dying: From the movie “The Shawshank Redemption”

You should always remain busy and that is the only thing that keeps you going on. If you will not remain busy in your life, then you are good for nothing and there would be no any value of yourself.

In almost every movie there is this one sentence, which one remembers. The one quote that you hear and even after years does not forget. Perhaps because it is repeated as often as Gollum’s “My Treasure”, which any spectator of The Lord of the Rings could imitate perfectly or because he summarizes a character as well as Jokers “Why so serious?” In The Dark Knight. Such film quotations are many and including a favorite to find, would be difficult.

Movie Quotes have existed since films have to sound. Early on, films have shaped sentences which are still in the ear today. In some cases, even if you have never seen the film. “I make him an offer that he cannot refuse” is so well-known and yet one can doubt that everyone has really seen the outstanding Marlon Brando as a godfather.