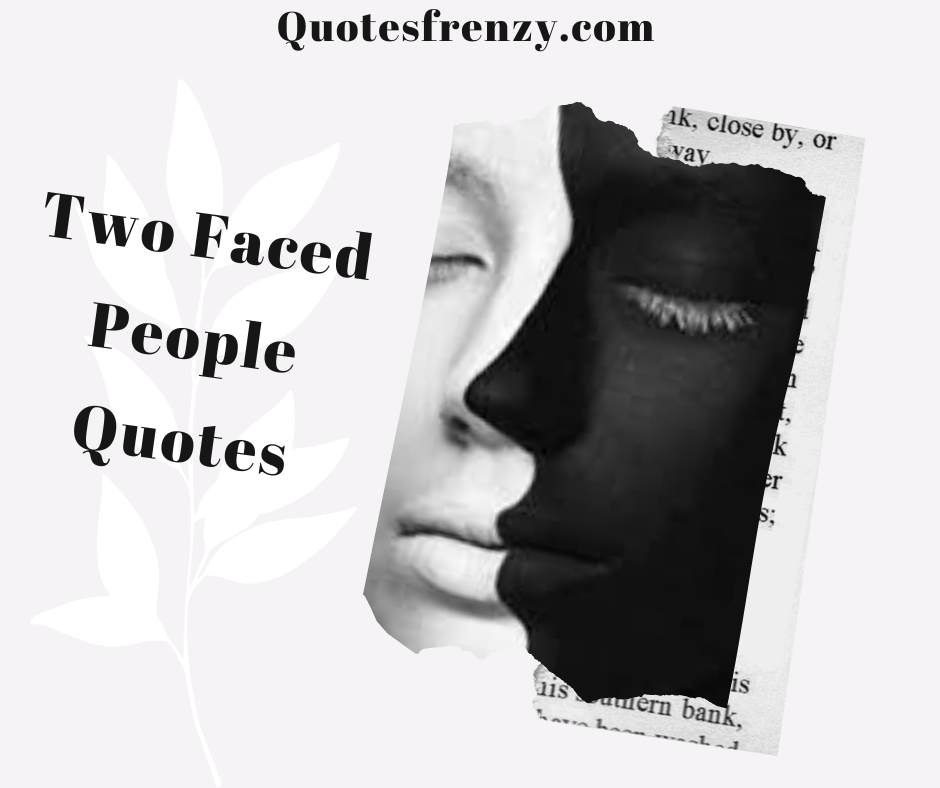 Two Faced People Quotes-One true friend is better than ten friends who would stab you in the back if they could get away with it. I love people who are mean to my face because I know exactly how they feel about me. The ones who are sweet and charming are great, but I’ve learned to take every action with a pinch of salt. These Two Faced People Quotes will tell you why.

Always sleep with one eye open. Never take anything for granted. Your best friends might just be your enemies – Sara Shepherd 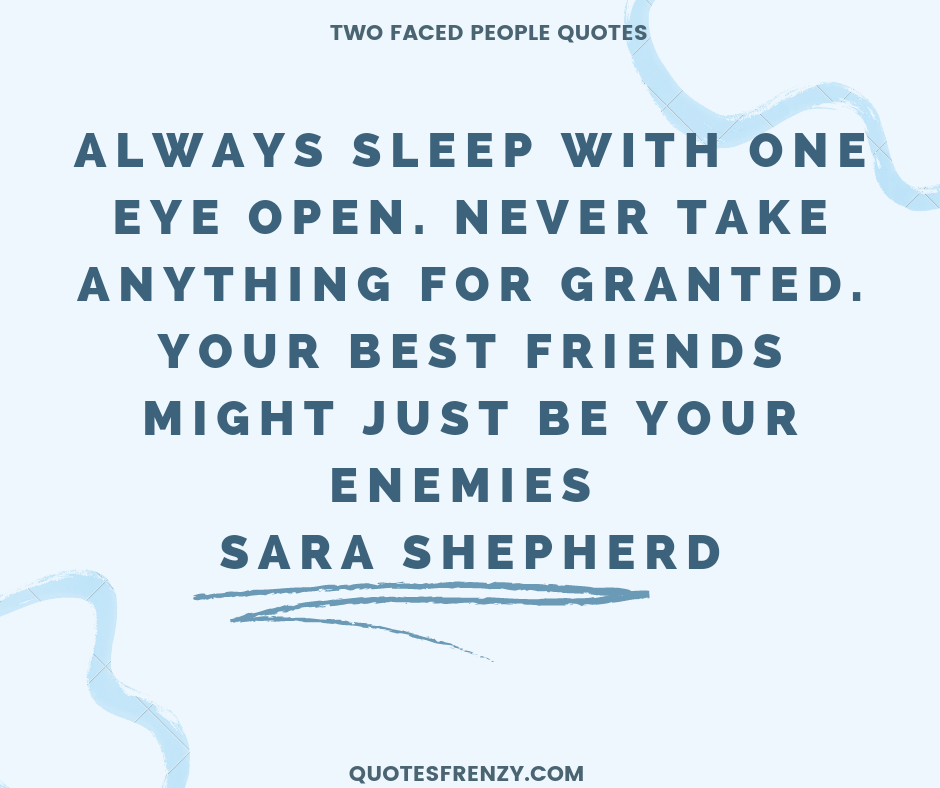 Your best friend knows your strengths and weaknesses. They know secrets about you that could destroy you. So when something about you gets out into the public and you know you only told one person, then that is your enemy. Forget the sacred vows of friendship and get ready for battle. The rules of engagement change when you need to, protect yourself. Wars are won wisely so bait your enemy with a vital piece of information. If they fail this confidence test, then cut them out of your life without further notice.

“If you’re gonna be two-faced at least make one of them pretty.” Marilyn Monroe 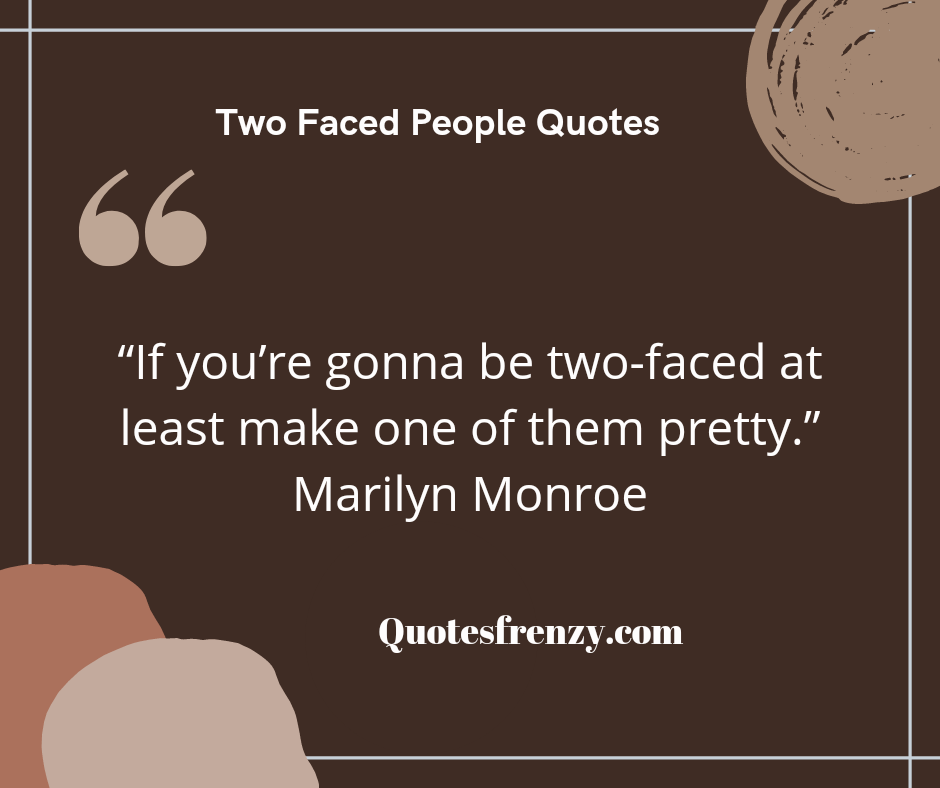 “When I see you, I think “I wonder which face she sees when she looks into the mirror.” C. JoyBell C.

Walk Away Quotes And Sayings

“If I were two-faced, would I be wearing this one?” Abraham Lincoln

“Everyone has two faces but often we see only one side of them so never judge anyone by there looks because the truth might surprised you!” Aaron Chan

“Some girls must get so exhausted putting makeup on two faces every morning.” Sarah Moores 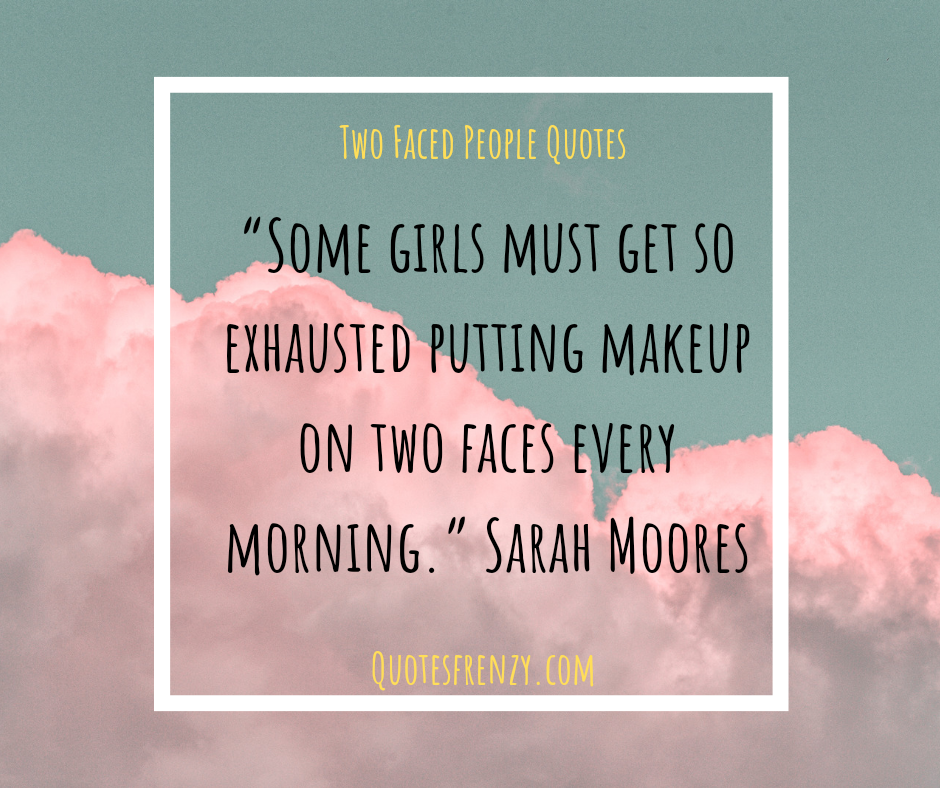 “Being nice to people you don’t like isn’t called two-faced… it’s called growing up.” Berajoy Vall

“Be careful who you trust because as quickly as they say they’re your friend is how quick they can turn their backs on you.” Abhishek Tiwari

“Every coin has two sides, just like most people have two faces.” Rashida Rowe

“When people are two Faced, the only thing you’ll know for sure is that you can’t trust either of them.” Unknown

“Every great work of art has two faces, one toward its own time and one toward the future, toward eternity.” Lester Bangs

“Everyone have two faces, but mine are twins.” Felix Caussan 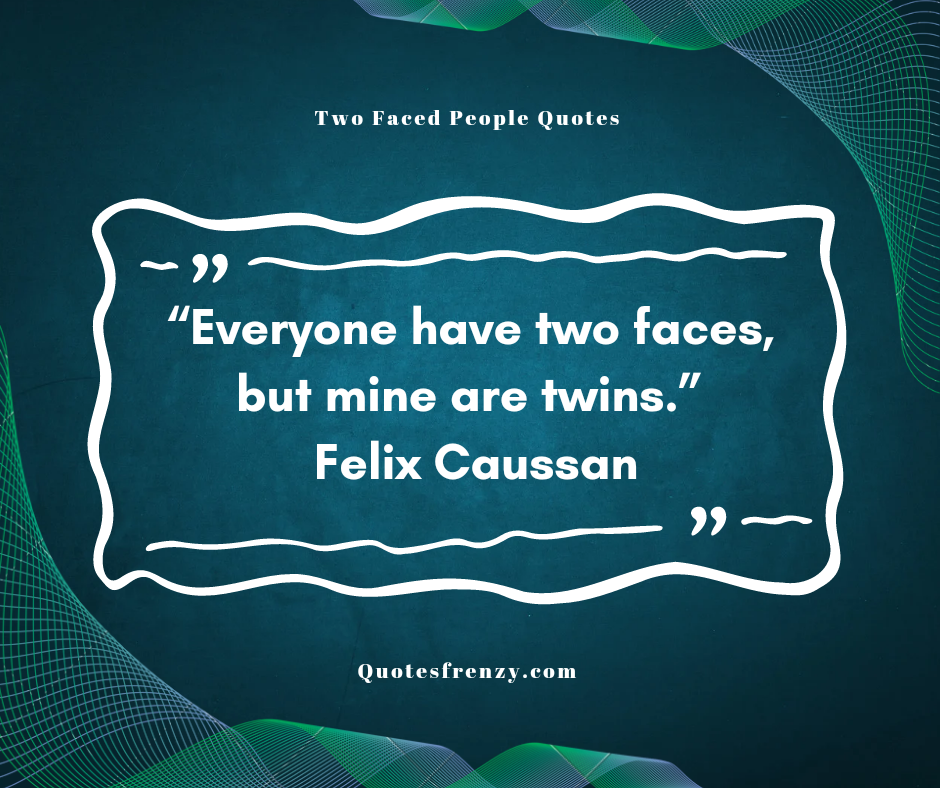 “Heroes are defined by their villains – Batman is nothing if he doesn’t have Two-Face.” Greg Rucka 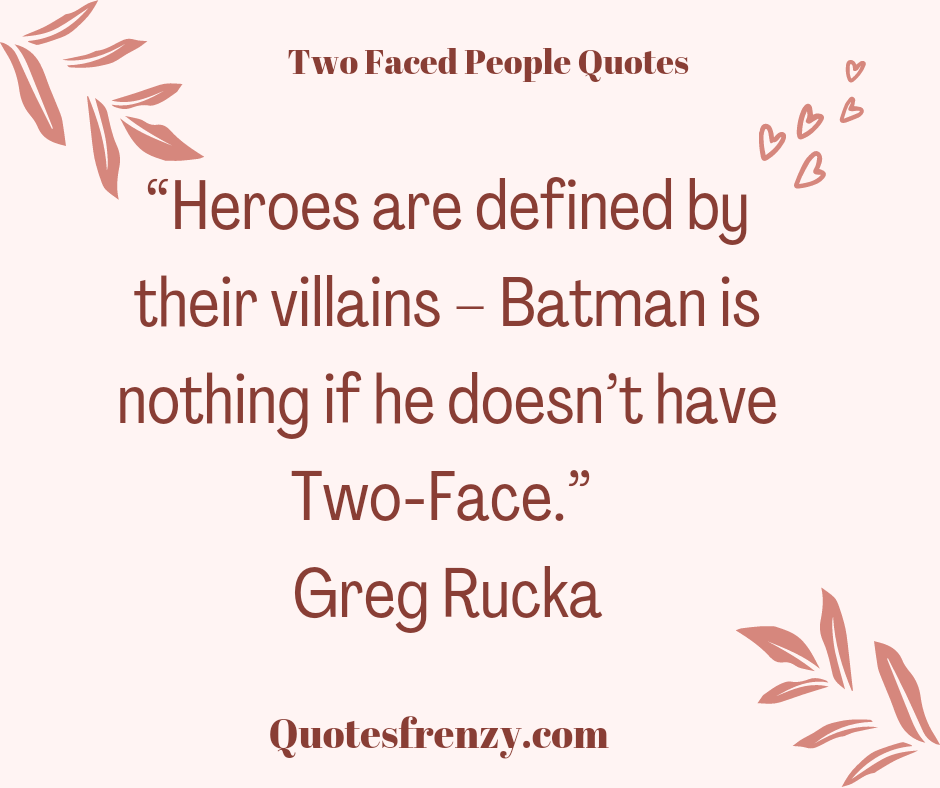 “The reason there are so few female politicians is that it is too much trouble to put makeup on two faces.” Maureen Murphy

“Ain’t two faced and I ain’t one to blow.” Dizzee Rascal (Vexed)

“You’re just like a penny, two-faced and worthless.” Unknown

“Without wearing any mask we are conscious of, we have a special face for each friend.” Oliver Wendell Holmes 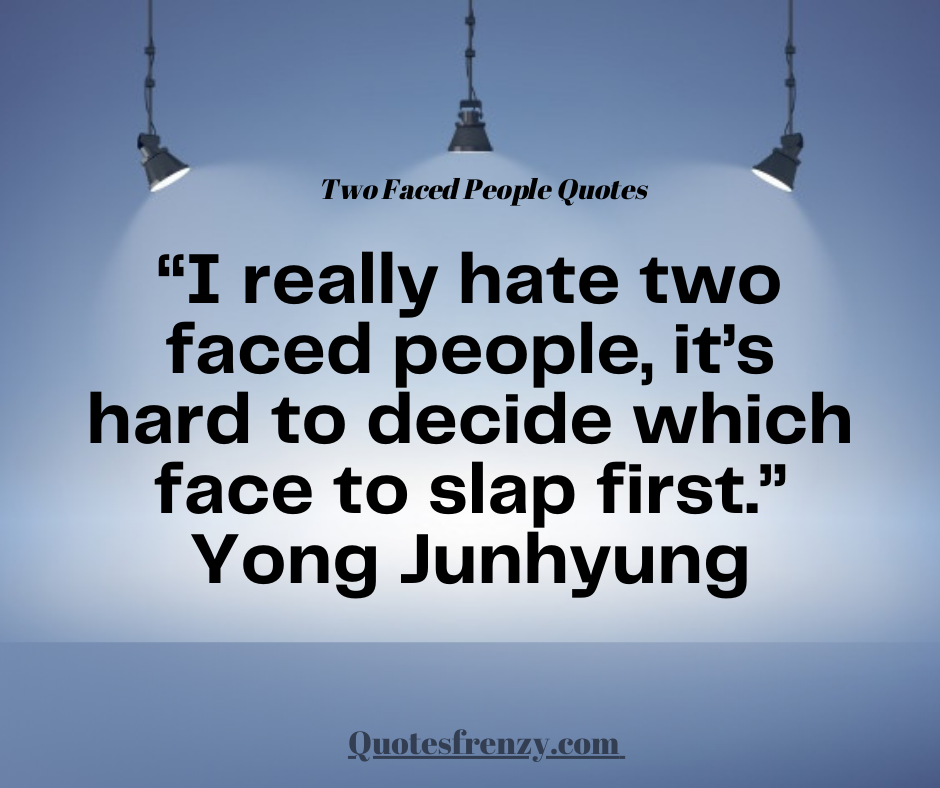 “Go put your creed into your deed, Nor speak with double tongue.” Ralph Waldo Emerson

“God has given you one face, and you make yourself another.” William Shakespeare

“When people are two-faced, the only thing you’ll know for sure is that you can’t trust either of them.” Unknown

“I hope you have not been leading a double life, pretending to be wicked and being good all the time. That would be hypocrisy.” Oscar Wilde

A person’s character is shown through their actions in life, Not where they sit on Sunday – Navonne Johns 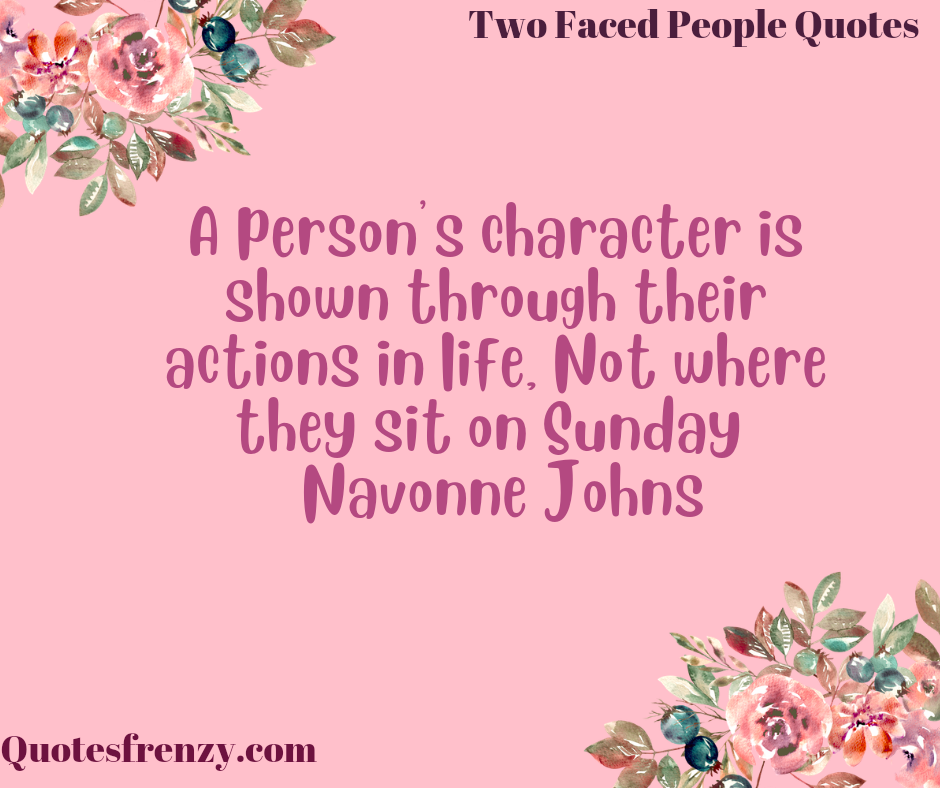 Good people don’t always go to church, but some terrible people may be the most devout to their religion. Do not judge a person based on their perceived spirituality or lack thereof. Judge a person by the way they treat you and the people you care about. This does not mean trusting the person who agrees with everything you do. It simply means embracing the person who respects you and values you. Be generous with second chances, but stingy with third chances.

Time passes and you begin to see, people for who they really are and not who they pretend to be-Scarlet Poop

Time has a way of exposing the truth that is hidden. It is almost like using a towel to dry yourself after a bath. You may not wash your armpits well because you know you only use the corner of your towel to dry it. When you are running late one day, you forget your corner rule and you dry your face with your dirty armpit towel corner. This two faced people quote is basically saying that with time, fake friends expose themselves.

Friends may come and go, so let these Two Faced People Quotes be the lemonade from the lemons of fake friendships.